The Muuchii day in Okinawa

In Okinawa, there is a custom to exorcise evil spirits by eating Muuchii on December 8 of the lunar calendar. It falls on Wednesday, January 20 this year.
For the people of Okinawa, Muuchii is also a symbol of the coming of winter. By the way, what is Muuchii?

In the Okinawan dialect, Mochi (sticky rice cake) is called "Muuchii". In Chinese characters, it is written as "Oni-mochi (ogre mochi)".
Muuchii is wrapped in shell ginger leaf which has a unique sweet and spicy scent, wrapping the rice cake brings the scent to the rice cake, giving it an elegant finish.

On this day, Muuchii is offered at a Buddhist altar or a furnace and eaten by family members to pray for their health and to drive away evil spirits. People hang Muuchii from the ceiling as many times as their children`s age and families that have babies celebrate Moochie Day give away Muuchii to relatives and neighbors, saying, "First Muuchii".

There is an old story of why it is written as “Oni-Mochi (ogre mochi) in Chinese characters.
A long time ago, a brother and a sister lived in a village. The brother became an ogre that eats livestock at night. In order to get rid of the ogre, the younger sister made a Muuchii with iron nails and wrapped it in a shell ginger leaf. She made her older brother, who became an ogre, eat Muuchii, and killed him by pushing him off a cliff whilst he was suffering from the pain. "

The day the brother was killed was December 8 in the lunar calendar. It became a custom to eat Muuchii and drive away evil spirits on that day. 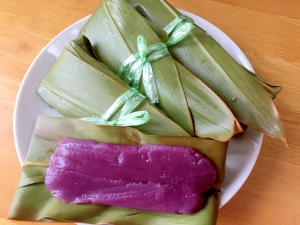 You can buy Muuchii at any local supermarkets. Let`s eat them tomorrow and get rid of evil spirits this year!