What is an Inkan?

In Japan, inkan (also called “hanko”) are used instead of signatures to close contracts and as an acknowledgement of understanding between different parties. Signatures are accepted occasionally, but many major purchases, such as cars, will require you to have one. There are two types of Inkans: One is a casual inkan, called a “Mitome-in,” which you can use for banking, work, and city-related documents. The other is a formal inkan called a “Jitsu-in,” which is registered at City Hall. There are several inkan stores in Okinawa, and some shops, such as Tabata have a designated corner where inkans can be created. 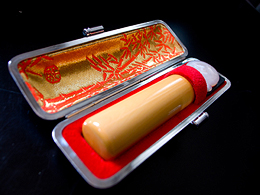 In order to register the inkan, the following materials are necessary: