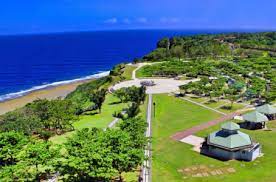 What is 慰霊の日 Irei no Hi？

June 23, 1945, is the day the battle of Okinawa ended.
In 1961, Ryukyu Government decided to make June 23 a holiday called "Irei no Hi 慰霊の日" to console and remember those who lost their lives and pray for peace. In 1991, Irei no Hi was made a prefectural holiday.
The Okinawa Prefectural Government holds an annual memorial ceremony on this day to commemorate those who lost their lives at the Peace Memorial Park. People on the island observe one minute's silence across the island at 12:00 midday.

The Battle of Okinawa

The Battle of Okinawa was one of the last major battles of the pacific war between U.S. forces and imperial Japan and was the only battle fought on Japanese soil during WWII. Okinawa was significant for both countries; the last barrier stood between the U.S. and Japan.
On April 1, 1945, the U.S. troops began the invasion of Okinawa's main island from Chatan, Kadena, and Yomitan. Japanese commander Lieutenant General Ushijima was ordered to hold onto the island at all costs, which resulted in conscripting local civilians, including students.
Throughout three months of the brutal and miserable ground battle, the battle of Okinawa ended with immense losses from both countries. More than 200,000 have lost their lives, including 120,000 Okinawans, equivalent to one in four Okinawans, and almost 94,000 of the Okinawans were local civilians. These numbers don't include the deaths from malaria, starvation, the British allies, and people from Korea and Taiwan.

Okinawa Prefecture promotes peace studies.
Usually, before Irei no hi, local schools invite local neighbors who experienced the war to share their experiences and pass on the lessons to the younger generation.

*1 It lists all known names who lost their lives in the battle regardless of nationality; military and civilian, Japanese and non-Japanese