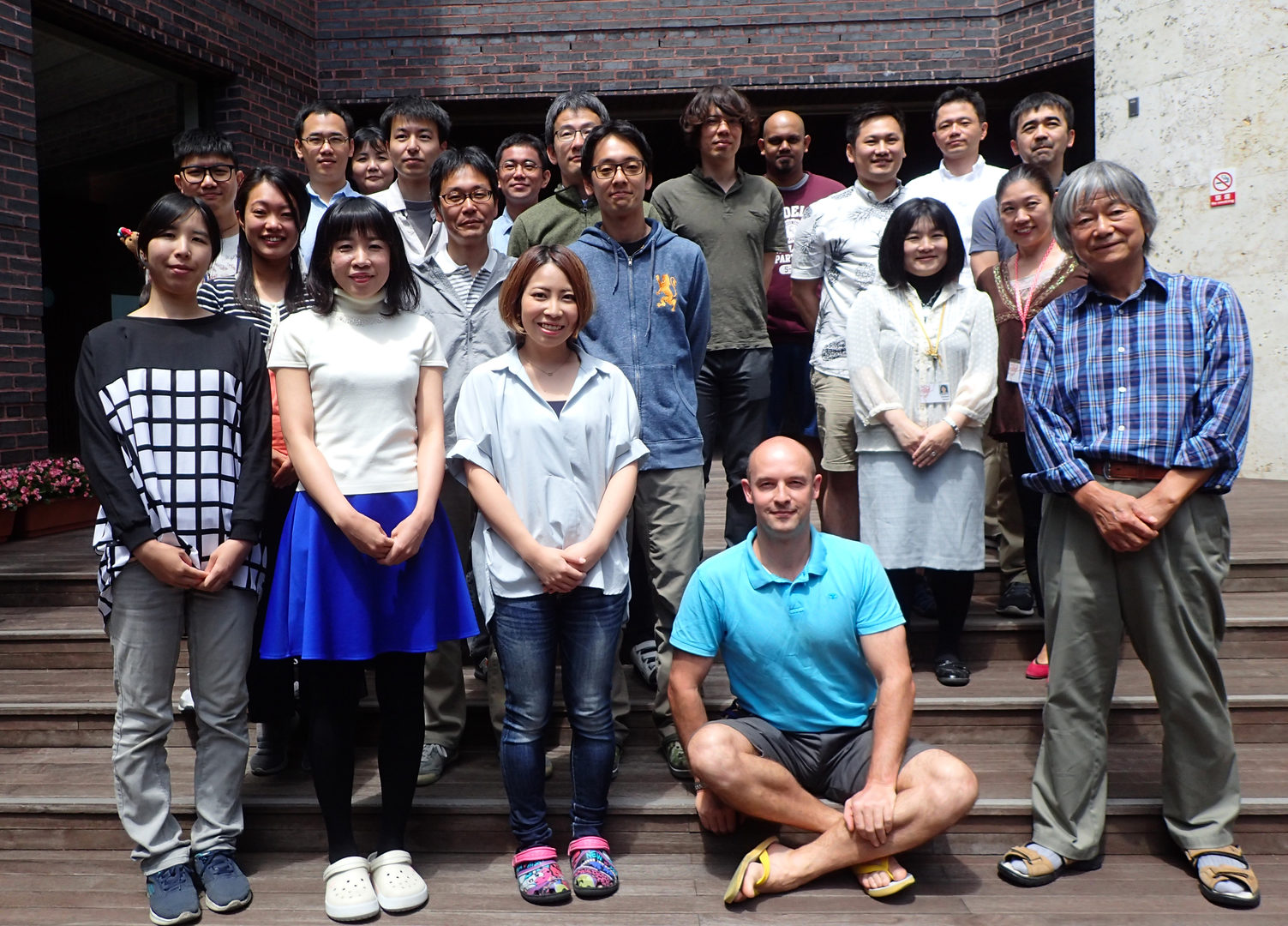 The genome contains all the genetic information of a given organism. Decoding the genome therefore provides the molecular basis for understanding every biological phenomenon. Since 2009, the Marine Genomics Unit (MGU) has conducted research in the realm of genome-based biological sciences. By decoding genomes of target marine organisms (mainly invertebrates), we wish to understand genetic and developmental mechanisms underlying diversity of marine organisms. The major research fields are (a) evolutionary and developmental genomics of marine invertebrates, (b) environmental genomics of coral reefs, and (c) functional genomics of marine organisms, including algae. We have decoded genome of a coral in 2011, a pearl oyster in 2012, and symbiotic dinoflagellate (Symbiodinium) in 2013. We further decoded genomes of hemichordates and a brachiopod in 2015, a brown alga in 2016, and Crown-Thorns-Starfish in 2017 in collaboration with Australian researchers. This year we could decode genomes of a nemertean, phoronid, and two dinoflagellate clades. Also, in collaboration with researches of Kyushu University and Tohoku University, we succeeded in decoding the habu snake genome, and in collaboration with Vietnam researchers, we decoded a striped catfish. Main results of this year research shall be reported below. 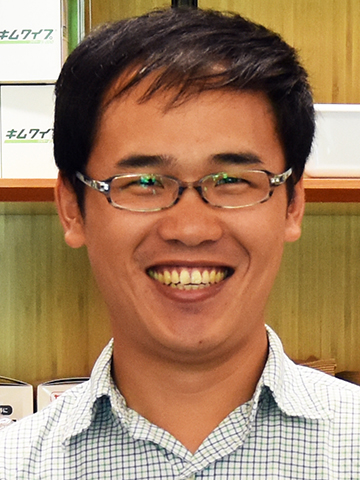 Comparative genomic studies on Dicyema japonicum: the phylogenetic position of dicyemids and the genomic adaptations to parasitic lifestyle.

Of eight publications in the field of Developmental and Evolutionary Genomics this year, we wish to report here results of two studies, one is of decoding Nemertean and phoronid genomes and the other is on the expansion that enabled chordate muscle evolution.

(1) Many questions remain to be answered to understand the evolution of lophotrochozoans, one of largest groups of protostomes that including leeches, snails and other invertebrates. Lophotrochozoans represent a superphylum that is crucial to our understanding of bilaterian evolution. Nemerteans (ribbon worms) and phoronids (horseshoe worms) are thought to be closely related lophotrochozoans. However, given the inconsistency of molecular and morphological data for these groups, their origins and evolutionary relation with others have been unclear. In this year, we (Luo et al. Nature Ecol. Evol. 2: 141-151, 2018) sequenced draft genomes the nemertean Notospermus geniculatus and the phoronid Phoronis australis, together with transcriptomes along the adult bodies. Our genome-based phylogenetic analyses place Nemertea sister to the group containing Phoronida and Brachiopoda (Fig. 1) 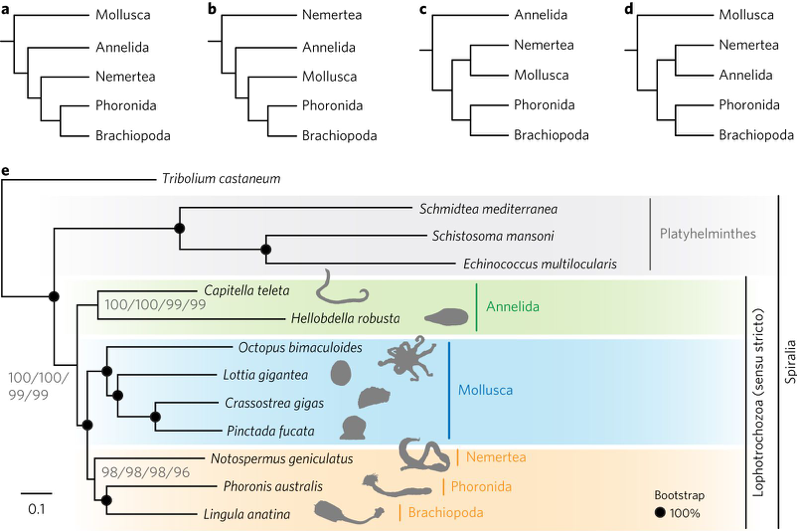 In addition, we obtained results to show that lophotrochozoans share many gene families with deuterostomes, suggesting that these two groups retain a core bilaterian gene repertoire that ecdysozoans (for example, flies and nematodes) and platyzoans (for example, flatworms and rotifers) do not. Furthermore, an interesting result came from comparative transcriptomics of lophophores. That is, this analysis demonstrates that lophophores of phoronids and brachiopods are similar not only morphologically, but also at the molecular level. Despite dissimilar head structures, lophophores express vertebrate head and neuronal marker genes (Fig. 2). This finding suggests a common origin of bilaterian head patterning, although different heads evolved independently in each lineage. This study reveals a dual nature of lophotrochozoans, where conserved and lineage-specific features shape their evolution. 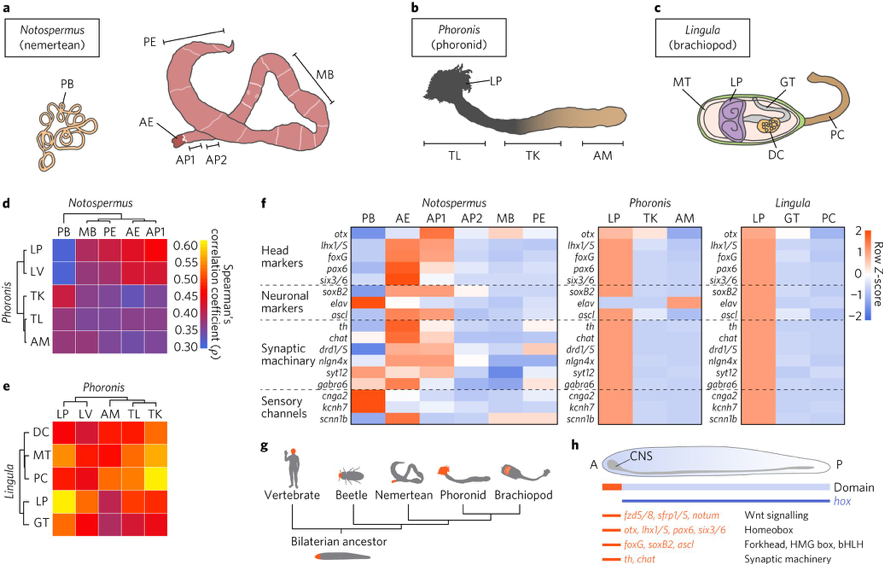 (2) We are interested in how chordate body plan originated and evolved. We have proposed that fish-like larvae or tadpole-type larvae are foundational to the chordate body plan, given the basal placement of free-living lancelets. That body plan probably made it possible for chordate ancestors to swim by beating a tail formed of notochord and bilateral paraxial muscles. In order to investigate the molecular genetic basis of the origin and evolution of paraxial muscle, we (Inoue and Satoh, Mol. Biol. Evol. 35:914-924, 2018) deduced the evolutionary histories of 16 contractile protein genes from paraxial muscle, based on genomic data from all five deuterostome lineages, using a newly developed orthology identification pipeline and a species tree. As a result, we found that more than twice as many orthologs of paraxial muscle genes are present in chordates, as in non-chordate deuterostomes (ambulacrarians) (Fig. 3). Orthologs of paraxial-type actin and troponin C genes are absent in ambulacrarians and most paraxial muscle protein isoforms diversified via gene duplications that occurred in each chordate lineage. Analyses of genes with known expression sites indicated that some isoforms were reutilized in specific muscles of nonvertebrate chordates via gene duplications. As orthologs of most paraxial muscle genes were present in ambulacrarians, in addition to expression patterns of related genes and functions of the two protein isoforms, regulatory mechanisms of muscle genes are suggested to be considered in future studies of the origin of paraxial muscle. 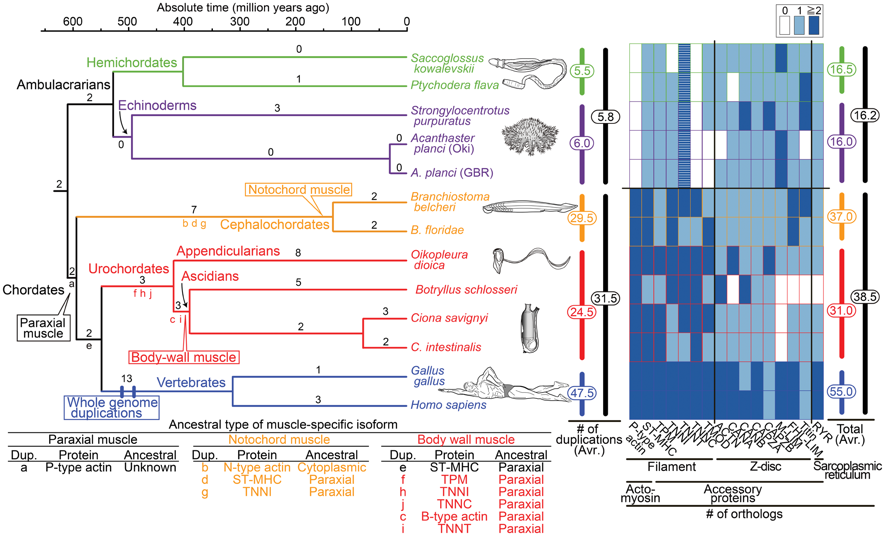 Marine dinoflagellate, Symbiodinium, is a well-known photosynthetic partner for coral and other diverse, non-photosynthetic hosts in subtropical and tropical shallows, where it comprises an essential component of marine ecosystems. Using molecular phylogenetics, the genus Symbiodinium has been classified into nine major clades, A-I. In 2013, we have decoded first in the world a draft genome of clade B1 Symbiodinium. One of the reported differences among phenotypes is their capacity to synthesize mycosporine-like amino acids (MAAs), which absorb UV radiation. However, the genetic basis for this difference in synthetic capacity is unknown. To understand genetics underlying Symbiodinium diversity, this year we decoded two draft genomes, one from clade A, presumed to have been the earliest branching clade, and the other from clade C, in the terminal branch (Shoguchi et al. BMC Genomics 19:458, 2018).

We obtained results that the nuclear genome of Symbiodinium clade A (SymA) has more gene families than that of clade C, with larger numbers of organelle-related genes, including mitochondrial transcription terminal factor (mTERF) and Rubisco (Fig. 4). While clade C (SymC) has fewer gene families, it displays specific expansions of repeat domain-containing genes, such as leucine-rich repeats (LRRs) and retrovirus-related dUTPases. Interestingly, the SymA genome encodes a gene cluster for MAA biosynthesis, potentially transferred from an endosymbiotic red alga (probably of bacterial origin), while SymC has completely lost these genes. Our analysis demonstrates that SymC appears to have evolved by losing gene families, such as the MAA biosynthesis gene cluster. In contrast to the conservation of genes related to photosynthetic ability, the terminal clade has suffered more gene family losses than other clades, suggesting a possible adaptation to symbiosis. Overall, our results imply that Symbiodinium ecology drives acquisition and loss of gene families. 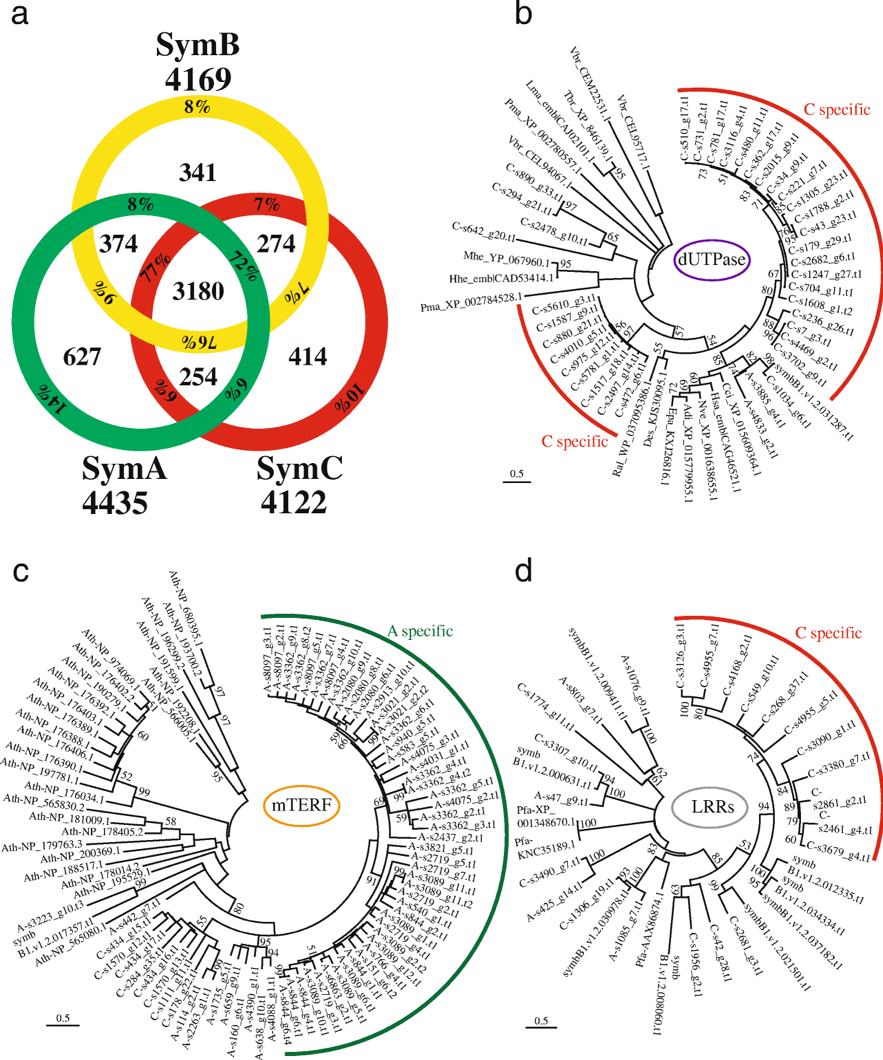 Fig. 4. Comparisons and expansions of gene families in Symbiodinium lineages.

Mammalian gut microbiota are integral to host health. However, how this association began remains unclear. This year, we (Nakashima et al., Nature Communications 9: 3402, 2018) show that in basal chordates the gut space is radially compartmentalized into a luminal part where food microbes pass and an almost axenic peripheral part, defined by membranous delamination of the gut epithelium (Fig. 5). While this membrane, framed with chitin nanofibers, structurally resembles invertebrate peritrophic membranes, proteome supports its affinity to mammalian mucus layers, where gut microbiota colonize. In ray-finned fish, intestines harbor indigenous microbes, but chitinous membranes segregate these luminal microbes from the surrounding mucus layer. These data suggest that chitin-based barrier immunity is an ancient system, the loss of which, at least in mammals, provided mucus layers as a novel niche for microbial colonization. These findings provide a missing link for intestinal immune systems in animals, revealing disparate mucosal environment in model organisms and highlighting the loss of a proven system as innovation. 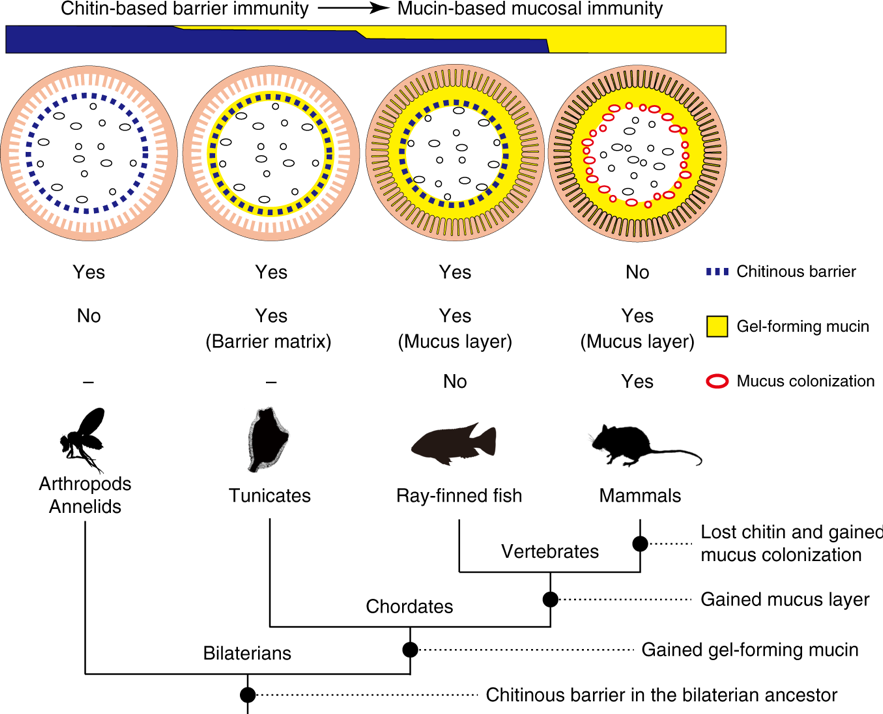 Fig. 5. Transition of gut mucosal surface in chordates and its implication for animal–microbe association. This figure summarizes results of this comparative study of chordates. For animal groups, shown as pictograms, intestinal barrier structures are illustrated above. These illustrations focus on physical, but not cellular or humoral, components of barrier immunity. Arthropods and annelids share chitinous barrier membranes (blue dotted line) that allow movement of nutrients, but not luminal microbes (black ovals), onto the ciliated gut epithelium. This so-called peritrophic matrix (PM) is widely observed in other invertebrates, although the presence of chitin remains unclear. Tunicates possess chitinous membranes embedded in a matrix of gel-forming mucin (yellow circle). This membrane confines food microbes into the luminal space and keeps the ciliated epithelium almost axenic. In ray-finned fish, the mucosal surface is covered with a layer of gel-forming mucin that is secreted from goblet cells. This mucus layer is separated from the luminal, indigenous microbial community by chitinous barrier membranes. In mammals, chitinous membranes no longer exist, and gut microbes directly interact with the surrounding layer of gel-forming mucin. Note that the mammalian mucus system has multiple physiological roles, and there exists regional variation in mucus conditions. This illustration depicts the mouse colon, in which the mucosal surface is covered with two layers of gel-forming mucin, with the outer layer forming a distinct niche for dense microbial colonization (red ovals). “Yes” or “No” indicate the presence or absence of the items listed on the right, respectively. Previously, invertebrate PMs and mammalian mucus layers were not believed to share common descent. New data on tunicates and ray-finned fish, however, fill this gap and suggest a transition from a chitin-based ancestral condition to a mucin-based derived state (top). A tree diagram of animal phylogeny (bottom) helps to infer events that account for the transition (black circles on branches). Mucus colonization in mammalian guts appears to be a novel type of animal–microbe association that was established upon loss of chitin