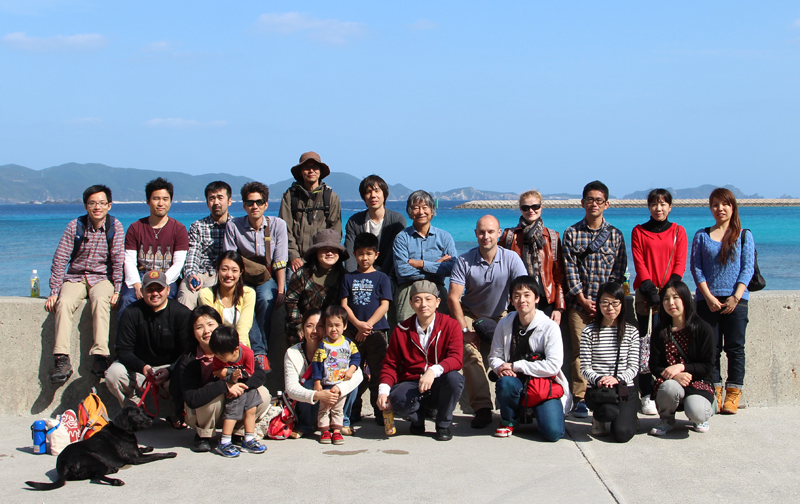 The genome contains all the genetic information of a given organism. Decoding the genome provides the molecular basis for understanding every biological phenomenon. Since the turn of the 21st century, genomes of various metazoans have been sequenced, and consequently studies progressed efficiently in the fields of evolutionary biology, developmental biology, and environmental biology. The objective of the Marine Genomic Unit (MGU) is to decode the genomes of target marine organisms, especially marine invertebrates, so as to comprehensively elucidate the molecular mechanisms underlying (a) development and evolution of marine invertebrates, (b) environmental responses of marine organisms, and (c) specific functions of metazoans. In fiscal year 2014, we obtained several results of studies in the three research areas each with publication of approximately 20 reports.

(a) Developmental and evolutionary genomics:

The coral reefs of the Okinawa islands are amongst the most biologically diverse ecosystems in the world. The key organisms in their establishment, the scleractinian corals, increasingly face a range of human-caused challenges including seawater temperature rises and ocean acidification. To understand better the molecular mechanisms underlying coral biology, we succeeded in deciphering the 420-Mbp-long genome of the coral Acropora digitifera in 2011, and found that the coral innate immunity repertoire is notably more complex than that of the sea anemone. In addition, in 2013, we succeeded in deciphering the 1500-Mbp-long genome of a zooxanthella, Symbiodinium minutum. This year, Chuya Shinzato developed a novel, cross-species microsatellite markers for Acropora corals using next-generation sequencing technology.

We continue to decode genomes of marine invertebrates in relation to functional genomics. This year, in collaboration with Dr. Kikawada’s group at the National Institute of Agrobiological Sciences (NIAS), Tsukuba, Japan, we have sequenced the genome of an anhydrobiotic midge with an extreme desiccation tolerance ability.

We are interested in the origin and evolution of chordates. This year, we have discussed the origins and evolution of chordates and proposed the three-phylum system of chordates. Traditional metazoan phylogeny classifies the Vertebrata as a subphylum of the phylum Chordata, together with two other subphyla, the Urochordata (Tunicata) and the Cephalochordata. The Chordata, together with the phyla Echinodermata and Hemichordata, comprise a major group, the Deuterostomia. Chordates invariably possess a notochord and a dorsal neural tube. Although the origin and evolution of chordates has been studied for more than a century, few authors have intimately discussed taxonomic ranking of the three chordate groups themselves. Accumulating evidence shows that echinoderms and hemichordates form a clade (the Ambulacraria), and that within the Chordata, cephalochordates diverged first, with tunicates and vertebrates forming a sister group. Chordates share tadpole-type larvae containing a notochord and hollow neural tube, whereas ambulacrarians have dipleurula-type larvae containing a hydrocoel. We have proposed that an evolutionary occurrence of tadpole-type larvae is fundamental to understanding mechanisms of chordate origin. Protostomes have now been reclassified into two major taxa, the Ecdysozoa and Lophotrochozoa, whose developmental pathways are characterized by ecdysis and trochophore larvae, respectively. Consistent with this classification, the profound dipleurula versus tadpole larval differences merit a category higher than the phylum. Thus, it is recommended that the Ecdysozoa, Lophotrochozoa, Ambulacraria and Chordata be classified at the superphylum level, with the Chordata further subdivided into three phyla, on the basis of their distinctive characteristics (Figure 1). 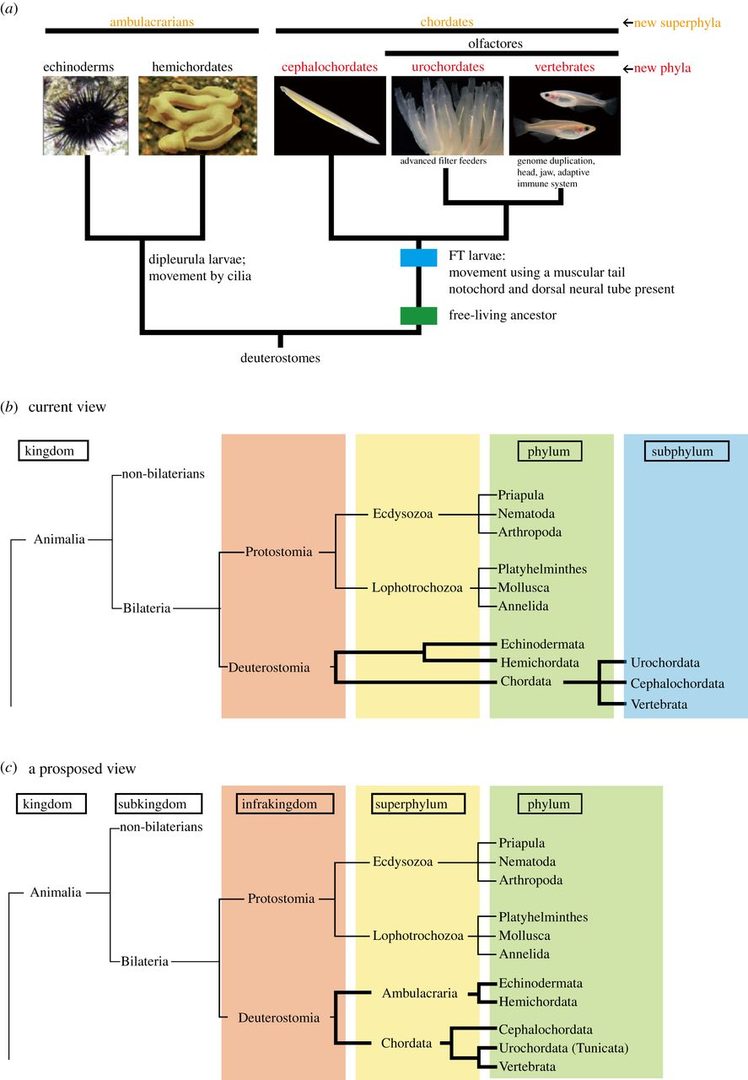 The genus Acropora (Scleractinia, Acroporidae) is one of the most widespread coral genera, comprising the largest number of extant species among scleractinian (reef-building) corals. Molecular phylogenetic studies have suggested that A. tenuis belongs to the most basal clade (clade I) while A. digitifera belongs to a derived clade (clade IV). In order to develop microsatellite markers that would be useful for most Acropora species, we sequenced the genomic DNA of A. tenuis using a next generation sequencer (Illumina MiSeq), and designed primer sets that amplify microsatellite loci. Afterward we selected primer pairs with perfectly matched nucleotide sequences from which at least one primer was uniquely mapped to the A. digitifera genome. Fourteen microsatellite markers showed non-significant departure from Hardy–Weinberg equilibrium(HWE) in both A. tenuis and A. digitifera. Thus these markers could be used for wide range of species and may provide powerful tools for population genetics studies and conservation of Acropora corals.

This year, in collaboration with Dr. Kikawada’s group at the National Institute of Agrobiological Sciences (NIAS), Tsukuba, Japan, we have sequenced the genome of an anhydrobiotic midge with an extreme desiccation tolerance ability. Anhydrobiosis represents an extreme example of tolerance adaptation to water loss, where an organism can survive in an ametabolic state until water returns. We reported the first comparative analysis examining the genomic background of extreme desiccation tolerance, which is exclusively found in larvae of the only anhydrobiotic insect, Polypedilum vanderplanki. We compare the genomes of P. vanderplanki and a congeneric desiccation-sensitive midge P. nubifer. We determine that the genome of the anhydrobiotic species specifically contains clusters of multi-copy genes with products that act as molecular shields (Figure 2). In addition, the genome possesses several groups of genes with high similarity to known protective proteins. However, these genes are located in distinct paralogous clusters in the genome apart from the classical orthologues of the corresponding genes shared by both chironomids and other insects. The transcripts of these clustered paralogues contribute to a large majority of the mRNA pool in the desiccating larvae and most likely define successful anhydrobiosis. Comparison of expression patterns of orthologues between two chironomid species provides evidence for the existence of desiccation-specific gene expression systems in P. vanderplanki.