The genome contains all the genetic information of a given organism. Decoding the genome therefore provides the molecular basis for understanding every biological phenomenon. Since the turn of the 21st century, genomes of various metazoans have been sequenced, and consequently studies progressed efficiently in the fields of evolutionary biology, developmental biology, and environmental biology. The objective of the Marine Genomic Unit is to decode the genomes of target marine invertebrates so as to comprehensively elucidate the molecular mechanisms underlying the (a) environmental responses, (b) development, and (c) evolution of marine animals. In fiscal year 2011, we have decoded genome of the coral Acroporal digitifera and that of the pearl oyster Pinctada fucata. We have published two papers in Nature. In addition, we have published 20 original papers of various research subjects. The major achievements were as follows.

The coral reefs of the Okinawa islands are amongst the most biologically diverse ecosystems in the world. The key organisms in their establishment, the scleractinian corals, increasingly face a range of human-caused challenges including ocean acidification and seawater temperature rises. To understand better the molecular mechanisms underlying coral biology, in this year, we have finally succeeded in deciphering the 420-Mbp-long genome of the coral Acroporal digitifera, which was published in Nature.

In spite of significant position of mollusks in developmental and evolutionary biology, so far no reports on genomes of this animal group appeared. We have decoded the pearl oyster genome this year, which was published in DNA Research.

We are interested in the origin and evolution of chordates. The notochord is the most prominent feature of chordates, and these organisms were named after this organ. Previously we revealed that a T-box transcription factor gene, Brachyury (Bra), plays a pivotal role in the formation of the notochord in ascidian embryos. We have discussed the origin of chordates in relation to the innovation of Bra gene expression and function.

To understand better the molecular mechanisms underlying coral biology, we decoded the approximately 420-megabase genome of Acropora digitifera using next-generation sequencing technology. This genome contains approximately 23,700 gene models. Molecular phylogenetics indicate that the coral and the sea anemone Nematostella vectensis diverged approximately 500 million years ago (Figure 1), considerably earlier than the time over which modern corals are represented in the fossil record. Despite the long evolutionary history of the endosymbiosis, no evidence was found for horizontal transfer of genes from symbiont to host. However, unlike several other corals, Acropora seems to lack an enzyme essential for cysteine biosynthesis (Table 1), implying dependency of this coral on its symbionts for this amino acid. Corals inhabit environments where they are frequently exposed to high levels of solar radiation, and analysis of the Acropora genome data indicates that the coral host can independently carry out de novo synthesis of mycosporine-like amino acids, which are potent ultra- violet-protective compounds (Figure 2). In addition, the coral innate immunity repertoire is notably more complex than that of the sea anemone, indicating that some of these genes may have roles in symbiosis or coloniality (Figure 3). A number of genes with putative roles in calcification were identified, and several of these are restricted to corals. The coral genome provides a platform for understanding the molecular basis of symbiosis and responses to environmental changes.

We are now decoding the genome of a coral symbiont, Symbiodinium minutum. 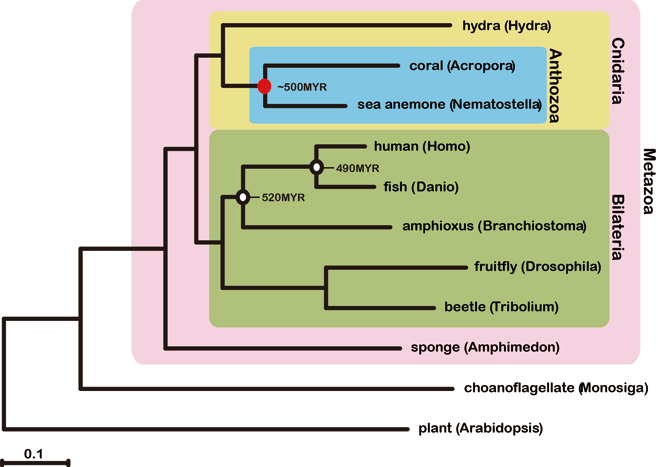 Figure 1: Molecular phylogeny of corals. 94,200 aligned amino acid positions of proteins encoded by 422 genes were obtained from the sponge Amphimedon queenslandica, from the cnidarians A. digitifera, Nematostella vectensis and Hydra magnipapillata, and from the triploblasts Tribolium castaneum, Drosophila melanogaster, Branchiostoma floridae, Danio rerio and Homo sapiens. The sequences were analysed using maximum likelihood methods, with the plant Arabidopsis thaliacia and the choanoflagellate Monosiga brevicollis serving as outgroups. The scale bar represents 0.1 expected substitutions per site in the aligned regions. The topology was supported by 100% bootstrap value. Approximate divergent times of the occurrence of basal chordates and divergence of vertebrates lineages are shown. This analysis indicates a deeper divergence of Acropora and Nematostella, approximately 500 million years (Myr) ago. 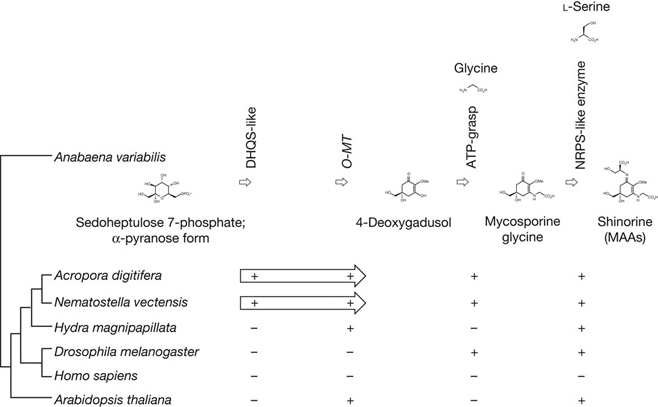 Figure 2: The genes required for the biosynthesis of shinorine are present in anthozoan cnidarians. Top, the organization of the gene cluster involved in the biosynthetic pathway of the photo-protective molecule shinorine, a mycosporine-like amino acid, in the cyanobacterium Anabaena variabilis. Bottom, the presence of corresponding genes in various organisms is indicated (+). The Acropora and Nematostella genomes contain homologues of each of the four genes, in which DHQS-like and O-MT are fused with each other.

Figure 3: Repertoires of TIR-domain-containing proteins of three cnidarians. The schematic representation of the domain structures of TIR-domain-containing proteins identified in A. digitifera, alongside the corresponding complements from Nematostella vectensis and Hydra magnipapillata. The repertoire of Toll/TLR, IL-1R-like and TIR-only proteins is significantly more complex in the case of A. digitifera than in N. vectensis or H. magnipapillata. TIR, TIR domain. DEATH, DEATH domain. IG and IGc2, Ig domain. LRR, LRY-TRY, LRR-CT and LRR-NT, leucine-rich repeats. 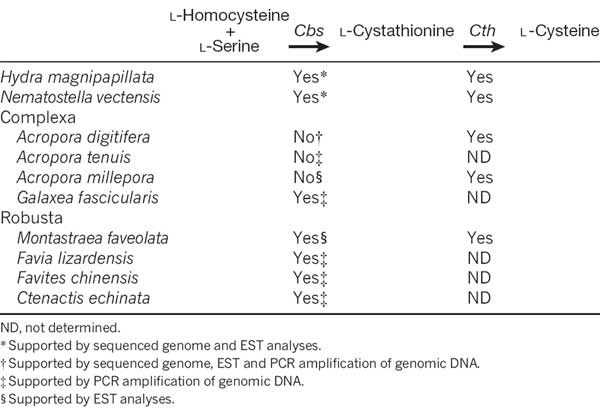 Table 1: The presence or absence of a gene encoding Cbs for l-cysteine biosynthesis

We have deciphered the pearl oyster genome with collaboration of various research groups of mollusk this year since the study of the pearl oyster Pinctada fucata is key to increasing our understanding of the molecular mechanisms involved in pearl biosynthesis and biology of bivalve mollusks (Figure 4). We sequenced ∼1150-Mb genome at ∼40-fold coverage using the Roche 454 GS-FLX and Illumina GAIIx sequencers. The sequences were assembled into contigs with N50 = 1.6 kb (total contig assembly reached to 1024 Mb) and scaffolds with N50 = 14.5 kb. The pearl oyster genome is AT-rich, with a GC content of 34%. DNA transposons, retrotransposons, and tandem repeat elements occupied 0.4, 1.5, and 7.9% of the genome, respectively (a total of 9.8%) (Figure 5). Version 1.0 of the P. fucata draft genome contains 23,257 complete gene models, 70% of which are supported by the corresponding expressed sequence tags. The genes include those reported to have an association with bio-mineralization (Table 2). Genes encoding transcription factors and signal transduction molecules are present in numbers comparable with genomes of other metazoans. Genome-wide molecular phylogeny suggests that the lophotrochozoan represents a distinct clade from ecdysozoans. Our draft genome of the pearl oyster thus provides a platform for the identification of selection markers and genes for calcification, knowledge of which will be important in the pearl industry.
In addition, in collaboration with Dr. Y. Sasakura’s lab at Tsukuba University, we disclosed that ependymal cells of chordate larvae are stem-like cells that form the adult nervous system. Namely, in ascidian tunicates, the metamorphic transition from larva to adult is accompanied by dynamic changes in the body plan. For instance, the central nervous system (CNS) is subjected to extensive rearrangement because its regulating larval organs are lost and new adult organs are created. To understand how the adult CNS is reconstructed, we traced the fate of larval CNS cells during ascidian metamorphosis by using transgenic animals and imaging technologies with photoconvertible fluorescent proteins. We showed that most parts of the ascidian larval CNS, except for the tail nerve cord, are maintained during metamorphosis and recruited to form the adult CNS (Figure 6). We also show that most of the larval neurons disappear and only a subset of cholinergic motor neurons and glutamatergic neurons are retained. Finally, we demonstrate that ependymal cells of the larval CNS contribute to the construction of the adult CNS and that some differentiate into neurons in the adult CNS (Figure 6). An unexpected role of ependymal cells highlighted by this study is that they serve as neural stem-like cells to reconstruct the adult nervous network during chordate metamorphosis. Consequently, the plasticity of non-neuronal ependymal cells and neuronal cells in chordates should be re-examined by future studies. This study was published in Nature.

Figure 4: (A) The pearl oyster P. fucata and its pearl. Scale bar, 1 cm. (B) Flow cytometry of a mixture of sperm from Pinctata and Oryzias. The Pinctata genome, estimated to be ∼1150 Mb in size, is slightly larger than the Oryzias genome (∼1100 Mb). 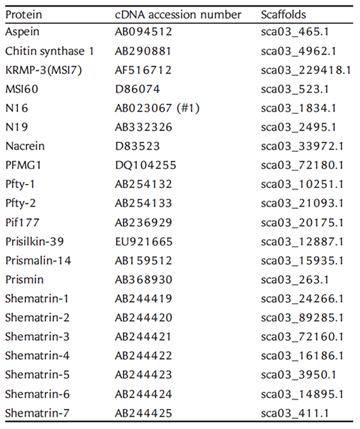 Table 2: The gene location in the P. fucata genome for reported cDNAs or proteins that are associated with pearl oyster shell matrix formation 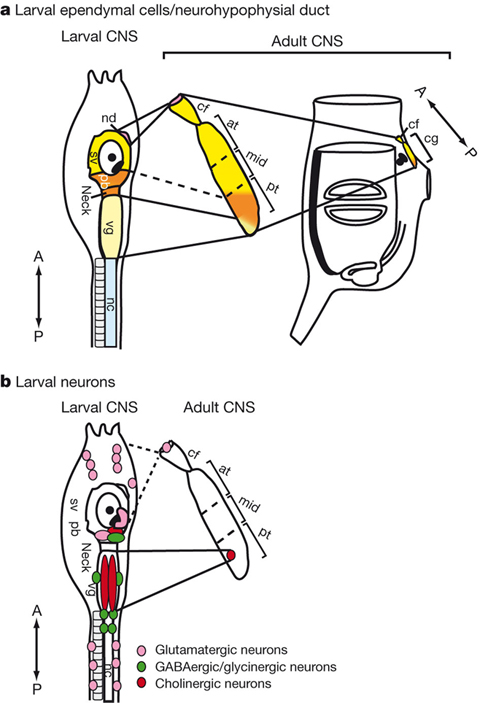 We have studied on the origin and evolution of chordates. More than 550 million years ago, chordates originated from a common ancestor shared with nonchordate deuterostomes by developing a novel type of larva, the “tadpole larva.” The notochord is the supporting organ of the larval tail and the most prominent feature of chordates; in- deed, phylum Chordata is named after this organ. In a recent review, we discussed the molecular mechanisms involved in the formation of the notochord over the course of chordate evolution with a special emphasis on a member of T-box gene family, Brachyury (Figure 7). Comparison of the decoded genome of a unicellular choanoflagellate with the genomes of sponge and cnidarians suggests that T-box gene family arose at the time of the evolution of multicellular animals. Gastrulation is a morphogenetic movement that is essential for the formation of two- or three-germ-layered embryos. Brachyury is transiently expressed in the blastopore (bp) region, where it confers on cells the ability to undergo invagination. This process is involved in the formation of the archenteron in all metazoans. This is a “primary” function of Brachyury. During the evolution of chordates, Brachyury gained an additional expression domain at the dorsal midline region of the bp. In this new expression domain, Brachyury served its “secondary” func- tion, recruiting another set of target genes to form a dorsal axial organ, notochord. The Wnt/β-catenin, BMP/Nodal, and FGF-signaling pathways are involved in the transcriptional ac- tivation of Brachyury. We discuss the molecular mechanisms of Brachyury secondary function in the context of the dorsal–ventral (D–V) inversion theory and the aboral-dorsalization hypothesis. Although the scope of this review requires some degree of oversimplification of Brachyury function, it is beneficial to facilitate studies on the notochord formation, a central evolutionary developmental biology problem in the his- tory of metazoan evolution.

Figure 7: A schematic representation of the innovation in Brachyury expression and function during evolution of animals.

Onimaru, K., Shoguchi, E., Kuratani, S., and Tanaka, M. 2011. Development and evolution of the lateral plate mesoderm: Comparative analysis of amphioxus and lamprey with implications for the acquisition of paired fins. Developmental Biology 359: 124-136.

Hirose, E., Nakashima, K., and Nishino, A. 2011. Is there intracellular cellulose in the appendicularian tail epidermis? A tale of the adult tail of an invertebrate chordate. Communicative & Integrative Biology 68: 1623-1631.

Nakashima, K., Nishino, A., and Hirose, E. 2011. Forming a tough shell via an intracellular matrix and cellular junctions in the tail epidermis of Oikopleura dioica (Chordata: Tunicata: Appendicularia). Naturwissenschaften 98: 661-669.

Satoh, N. 2011. On the origin and evolution of chordates: Lessons from their genomes. In Searching for eve: Basal metazoans and the evolution of multicellular complexity. Tutzing, Germany.

Satoh, N. 2011. The Genome Science: the Past and Future. In Faculty of Science Lecture Series, Shizuoka University. Shizuoka, Japan.

Satoh, N. 2012. An evo-devo note on the origin and evolution of chordates. Institute of Cellular and Organismic Biology, Academia Sinica, Taiwan.

Maeda, K., Saeki, T., and Tachihara, K. 2011. Larval fish fauna on a sandy beach and an estuary along the coast of Oh-ura Bay, Okinawa Island. In The 8th International Workshop on the Oceanography and Fisheries Science of the East China Sea. Okinawa Japan.