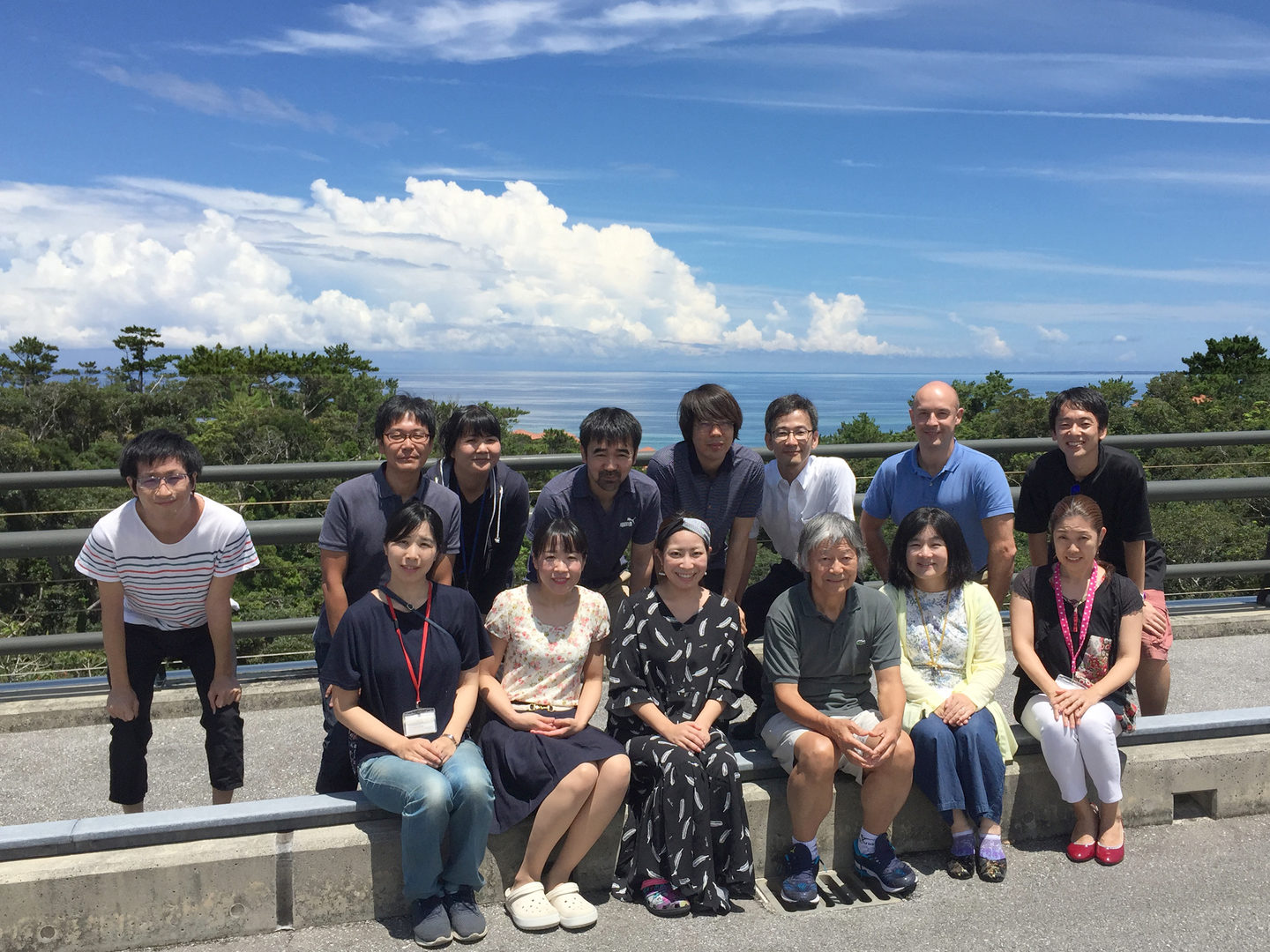 The genome contains all the genetic information of a given organism. Decoding the genome therefore provides the molecular basis for understanding every biological phenomenon. Since 2009, the Marine Genomics Unit (MGU) has conducted research in the realm of genome-based biological sciences. By decoding genomes of target marine organisms (mainly invertebrates), we wish to understand genetic and developmental mechanisms underlying diversity of marine organisms. The major research fields are (a) evolutionary and developmental genomics of marine invertebrates, (b) environmental genomics of coral reefs, and (c) functional genomics of marine organisms, including pearl oyster and algae. To date, we have decoded genome of a coral in 2011, a pearl oyster in 2012, and symbiotic dinoflagellate (Symbiodinium) in 2013. We further decoded genomes of hemichordates and a brachiopod in 2015, a brown alga (Okinawa-mozuku) in 2016, Crown-Thorns-Starfish in 2017, and a nemertean, phoronid, and two dinoflagellate clades in 2018. This year we deciphered genomes of two jellyfish, dicyemid, acoel flatworm, siphonous macroalga (umi-budo), and brown alga (ito-mozuku). We also improved the Ciona intestinalis genome to be nearly complete one. Main results of this year research shall be reported below.

3. The Research Encouragement Prize of Okinawa 2019 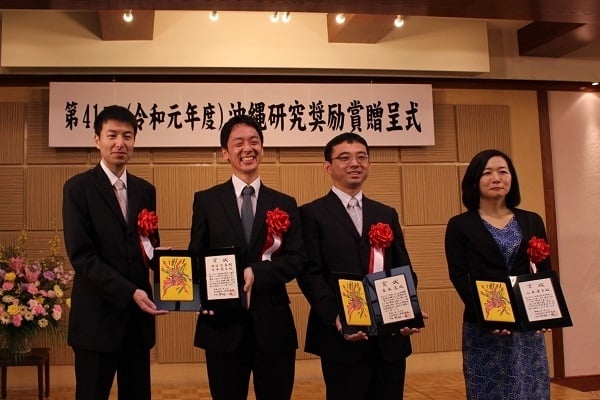 Dr. Koki Nishitsuji(middle left) and Dr. Asuka Arimoto(left) were awarded the Research Encouragement Prize of Okinawa 2019 as recognition for their contribution to Okinawa for their work on deciphering the genomes of many algal crops, including Okinawa mozuku and Umi-budo.

This year our Unit has deciphered genomes of two jellyfish, dicyemid, acoel flatworm, siphonous macroalga (umi-budo), and brown alga (ito-mozuku). We have also improved the Ciona intestinalis genome to be nearly complete one. Here, we report results of jellyfish genomes, which was published in Nature Ecology and Evolution 3:811-822 (2019) with cover photo of the journal.

The Cnidaria is an ancient phylum considered a sister group to all bilaterian animals. They are astonishingly diverse in body form and lifestyle, including the presence of a jellyfish stage in medusozoans and its absence in anthozoans (Fig. 1). Here, we sequence the genomes of Aurelia aurita (a scyphozoan) and Morbakka virulenta (a cubozoan) to understand the molecular mechanisms responsible for the origin of the jellyfish body plan. We show that the magnitude of genetic differences between the two jellyfish types is equivalent, on average, to the level of genetic differences between humans and sea urchins in the bilaterian lineage. About one-third of Aurelia genes with jellyfish-specific expression have no matches in the genomes of the coral and sea anemone, indicating that the polyp-to-jellyfish transition requires a combination of conserved and novel, medusozoa-specific genes (Fig. 2). While no genomic region is specifically associated with the ability to produce a jellyfish stage, the arrangement of genes involved in the development of a nematocyte—a phylum-specific cell type—is highly structured and conserved in cnidarian genomes; thus, it represents a phylotypic gene cluster. 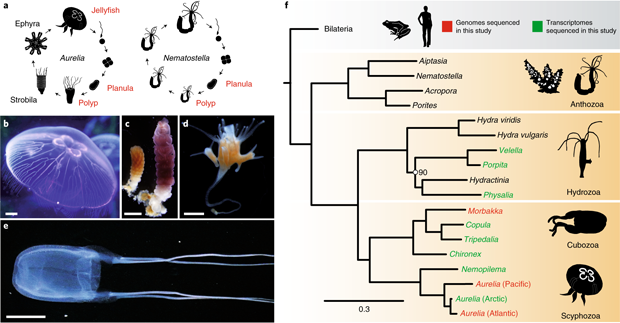 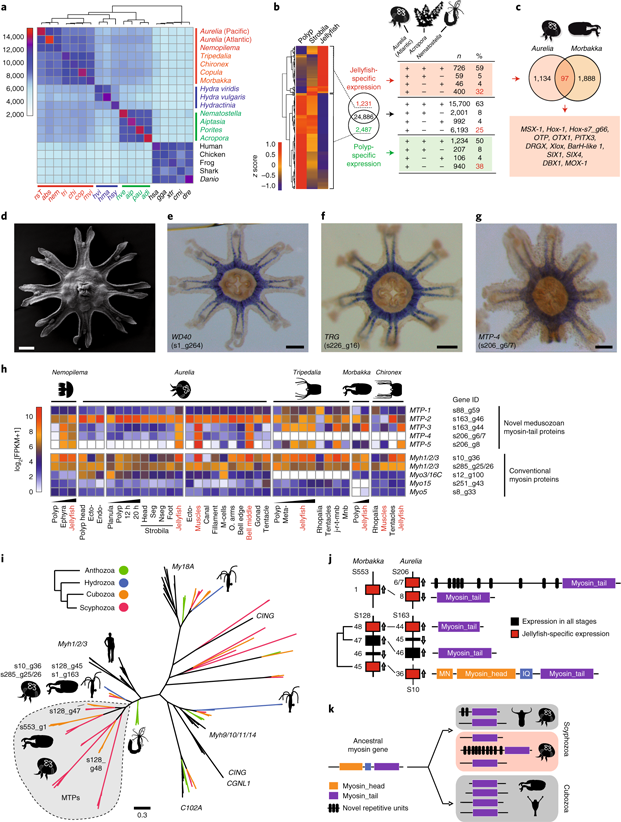 Fig. 2 | Phylogenetic distribution of genes and tissue-specific gene expression. a, Numbers of shared orthologous genes among cnidarian groups (Supplementary Table 6). Based on gene sets, there are four clusters corresponding to Anthozoa, Hydrozoa, Cubozoa and Scyphozoa. Representative bilaterians were used as an outgroup. Abbreviated genus/species names are shown at the bottom. The colours and order correspond to the genus/ species names shown on the right-hand side. The colour key shows the number of shared orthologous genes among cnidarian groups. b, Left, expression of polyp- and jellyfish-specific genes in Aurelia. Middle, a total of 1,231 genes are jellyfish-specific, 2,487 are polyp-specific and 24,886 genes do not show stage-specific expression. Right, presence or absence of Aurelia genes with stage-specific expression in the genomes of Acropora and Nematostella. BLASTP cut-off: 1 × 10−4. c, Venn diagram showing the number orthologous genes with jellyfish-specific expression in Aurelia and Morbakka. A list of 13 homeobox genes that are common markers of a jellyfish stage in Scyphozoa and Cubozoa is shown below. d, Scanning electron microscope (SEM) image of a juvenile medusa. e-g, Genes exclusively expressed in striated muscles of Aurelia revealed by in situ hybridization. WD40-repeat protein gene (s1_g264; that is, gene 264 in scaffold 1) (e), putative taxonomically restricted gene with novel repetitive domains (s226_g16) (f) and novel myosin tail protein 4 gene, MTP4 (s206_g6/7) (g). Scale bars: 200 μm. h, Expression of novel and conventional myosins in various stages and tissues of Nemopilema, Aurelia, Tripedalia, Morbakka and Chironex. s88_g59 and so on represent gene IDs in the Aurelia genome (see Supplementary Note 3.1). Numbers following ‘Myh’ or ‘Myo’ represent the classification of medusozoan myosins based on phylogenetic reconstruction and their domain composition. 12 h and 20 h represent the time after metamorphosis induction. ecto-, ectoderm; endo-, endoderm; FPKM, fragments per kilobase of transcript per million mapped reads; j-r-t-mnb, jellyfish without rhopalia, tentacles and manubrium; m-cells, mesoglea cells; meta-, metamorphosis; mnb, manubrium; muscles, ectodermal striated muscles; nseg, non-segmented part; o. arms, oral arms of a jellyfish; seg, segments. Captions for the jellyfish stages and muscle tissues are shown in red text. i, Maximum-likelihood phylogenetic tree of myosin proteins based on the alignment of their Myosin_tail_1 domains. Proteins of Aurelia and Morbakka belong to a distinct clade highlighted in grey. LG substitution model was used. Bootstrap support for all nodes is shown in Supplementary Fig. 14. j, Genomic localization of novel MTPs in the genomes of Morbakka and Aurelia. Scaffolds (S) and the genes within the scaffolds are numbered. A conventional myosin gene is located in Morbakka scaffold 128, adjacent to novel MTP genes. IQ, calmodulin-binding domain; MN, myosin N-terminal domain. k, A possible evolutionary scenario of MTP development from ancestral conventional myosin by gene duplication, followed by subsequent gene family expansions. MTPs of Aurelia and Morbakka seem to be of common origin, but have already acquired structural differences, such as additional repetitive domains in Aurelia.

We report here results of decoded genome of the siphonous green alga, Caulerpa lentillifera, which was published in DNA Research 26:183-192 (2019). Genome evolution and development of unicellular, multinucleate macroalgae (siphonous algae) are poorly known, although various multicellular organisms have been studied extensively. To understand macroalgal developmental evolution, we assembled approximately 26Mb genome of a siphonous green alga, Caulerpa lentillifera (Fig. 1), with high contiguity, containing 9,311 protein- coding genes. Molecular phylogeny using 107 nuclear genes indicates that the diversification of the class Ulvophyceae, including C. lentillifera, occurred before the split of the Chlorophyceae and Trebouxiophyceae. Compared with other green algae, the TALE superclass of homeobox genes, which expanded in land plants, shows a series of lineage-specific duplications in this siphonous macroalga (Fig. 2). Plant hormone signalling components were also expanded in a lineage- specific manner. Expanded transport regulators, which show spatially different expression, suggest that the structural patterning strategy of a multinucleate cell depends on diversification of nuclear pore proteins. These results not only imply functional convergence of duplicated genes among green plants, but also provide insight into evolutionary roots of green plants. Based on the present results, we propose cellular and molecular mechanisms involved in the structural differentiation in the siphonous alga. 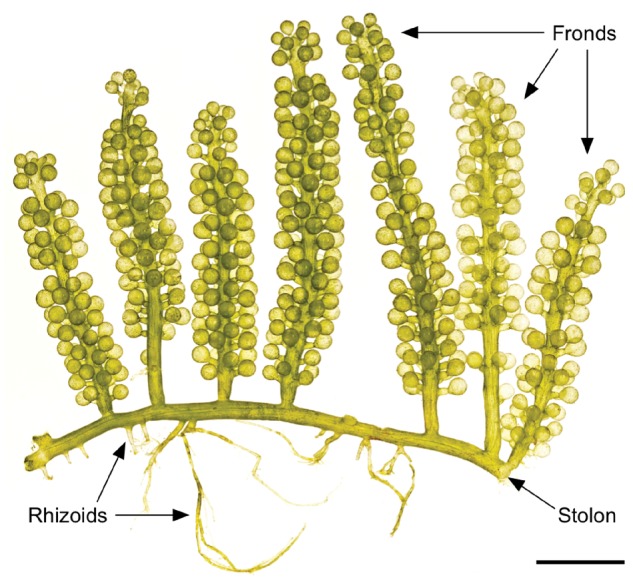 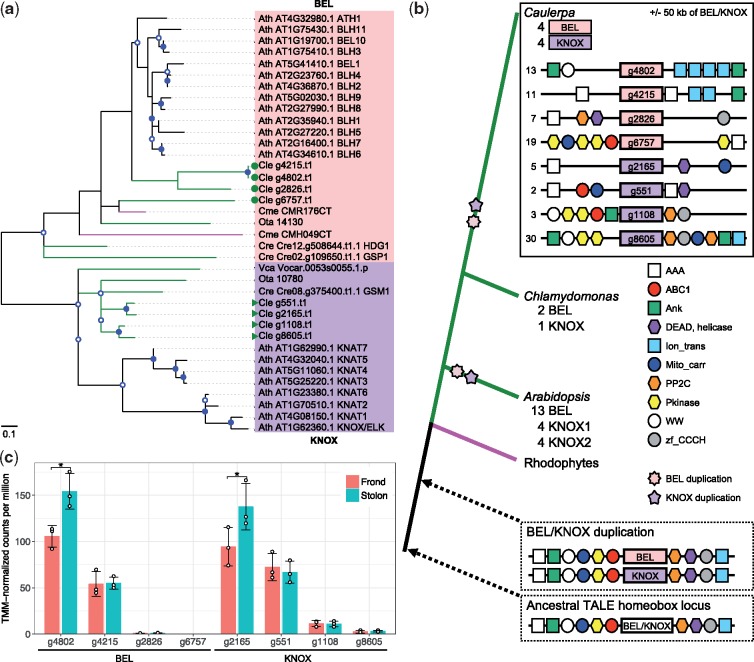