Draculab is written entirely in Python, with certain key functions coded in Cython (Verduzco Flores and De Schutter, 2019). Development environments such as Spyder (https://www.spyder-ide.org/), or the Jupyter Notebook (https://jupyter.org/), are well suited for working with Draculab. The interface uses standard functions that create units, connect them, and run simulations. These functions are configured using parameter dictionaries as their arguments. Users can launch their first simulations within minutes (see section 2). 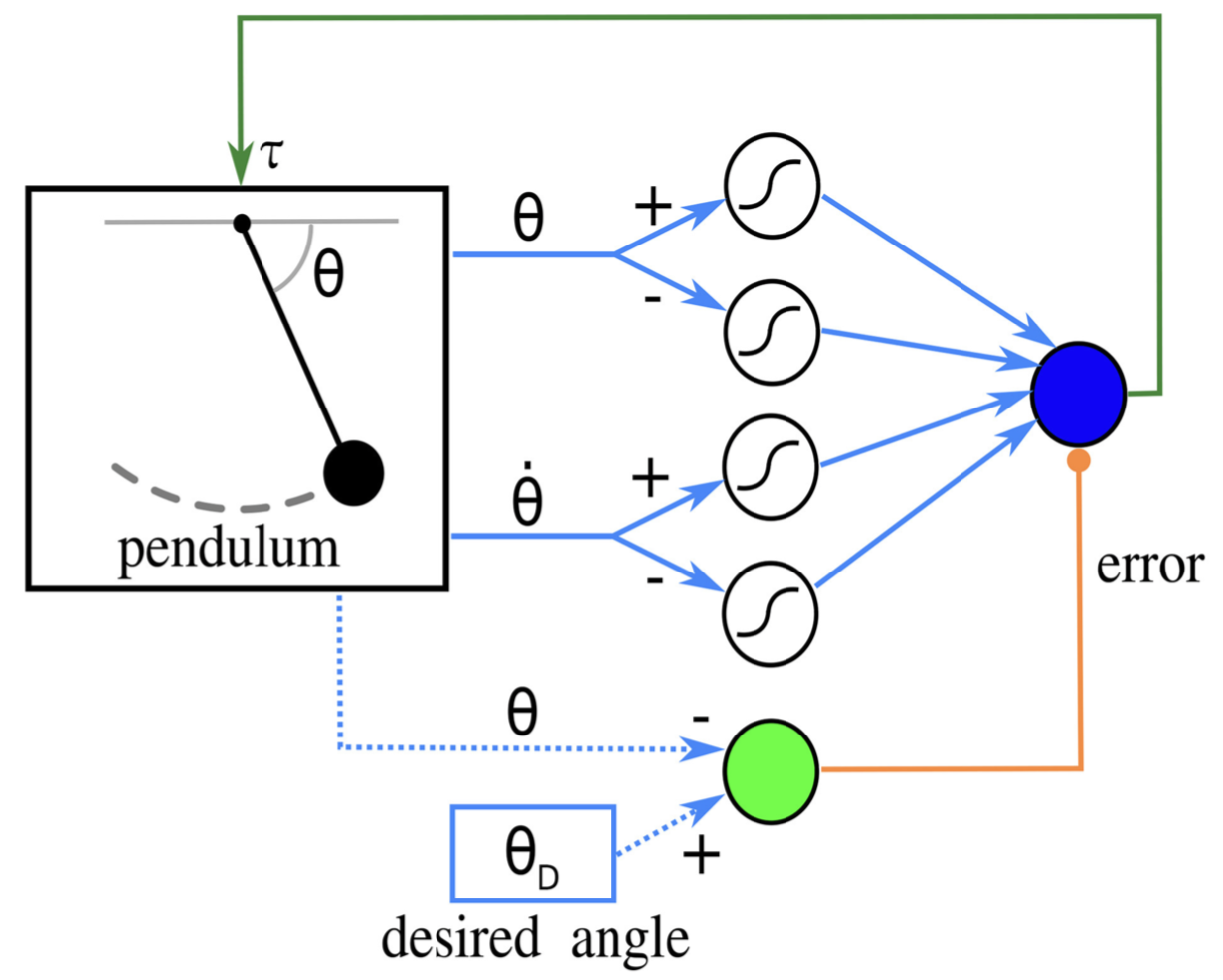 A simple example requiring about 50 lines of Draculab code is shown in Figures 1-2. The pendulum sends angle and angular velocity signals to four sigmoidal afferent units, which in turn send inputs to a control unit (blue circle). The control unit produces a torque on the pendulum based on this input. The source unit, in green, calculates an error signal from the desired and the current angle. The derivative of this error is used by the learning rule.

Figure 1: Diagram of a simple network for closed-loop simulation (from Verduzco Flores and De Schutter, 2019). 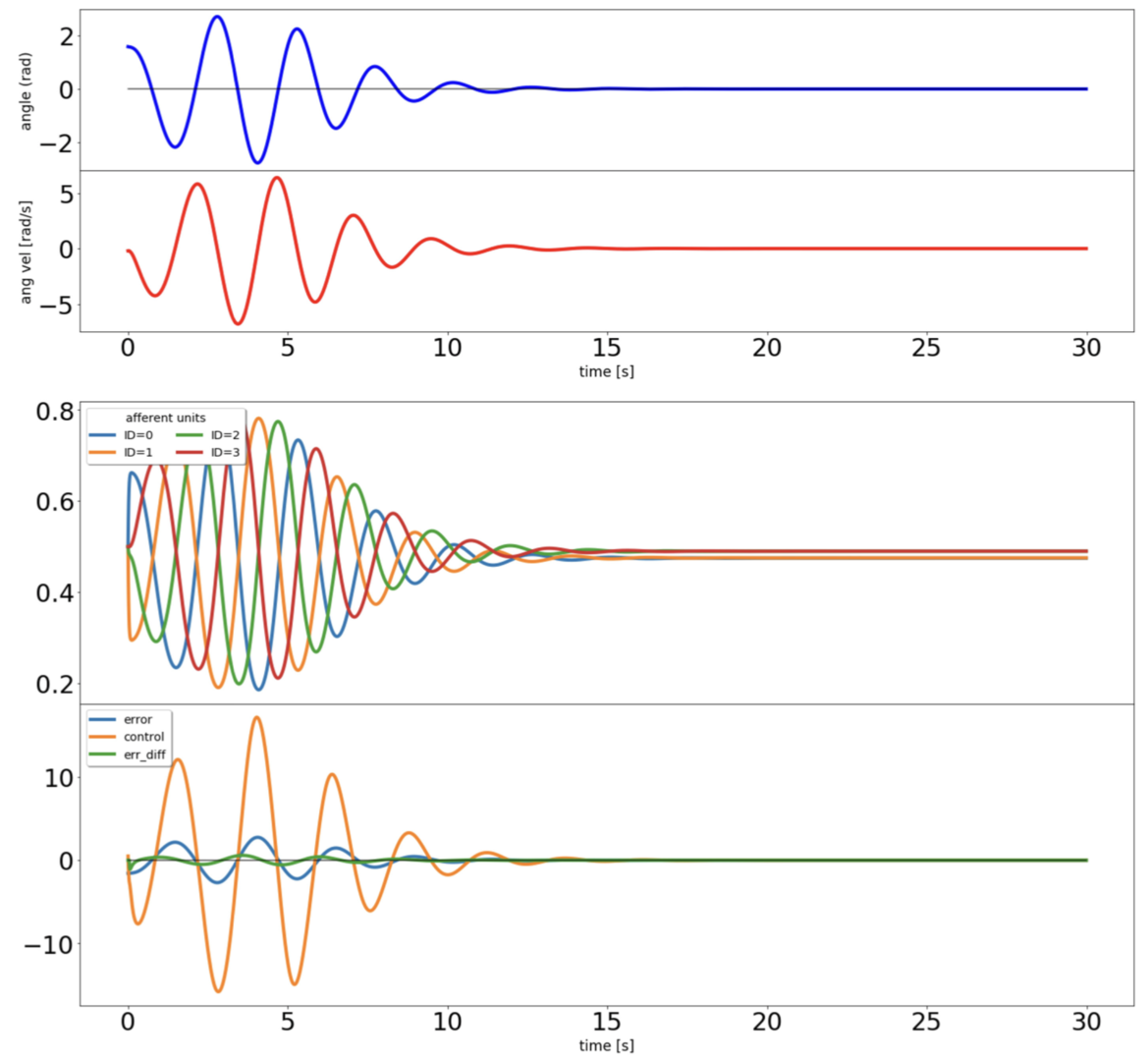 Figure 2: Output of the closed loop simulation using an input correlation rule to adjust the synaptic weights of the afferent inputs to the control unit (from Verduzco Flores and De Schutter, 2019).

Frequency dependence of induction in a model of long-term depression

Cerebellar long-term depression (LTD) is a form of synaptic plasticity dependent on postsynaptic Ca2+ changes. A fundamental question is how LTD is selectively induced by specific numbers of Ca2+ pulses and which are the frequency and duration of this train of pulses required for LTD induction. The molecular mechanism which leads the integration of postsynaptic Ca2+ pulses in the LTD signaling network has not been elucidated either. Unfortunately, these matters have not been studied systematically at the experimental level. Recent publications have shown that Ca2+/calmodulin-dependent protein kinase II (CaMKII) is required for LTD induction. Additionally, protein kinase C (PKC), CaMKII, and MAPK play an important role to transduce the frequency of Ca2+ pulses into their enzymatic activity levels; however, it is still unknown which enzymes are involved in decoding Ca2+ pulses in LTD.

We have extended a stochastic model of LTD by adding the molecular network regulating CaMKII activity and its activation (Zamora Chimal and De Schutter, 2018) (Figure 3). 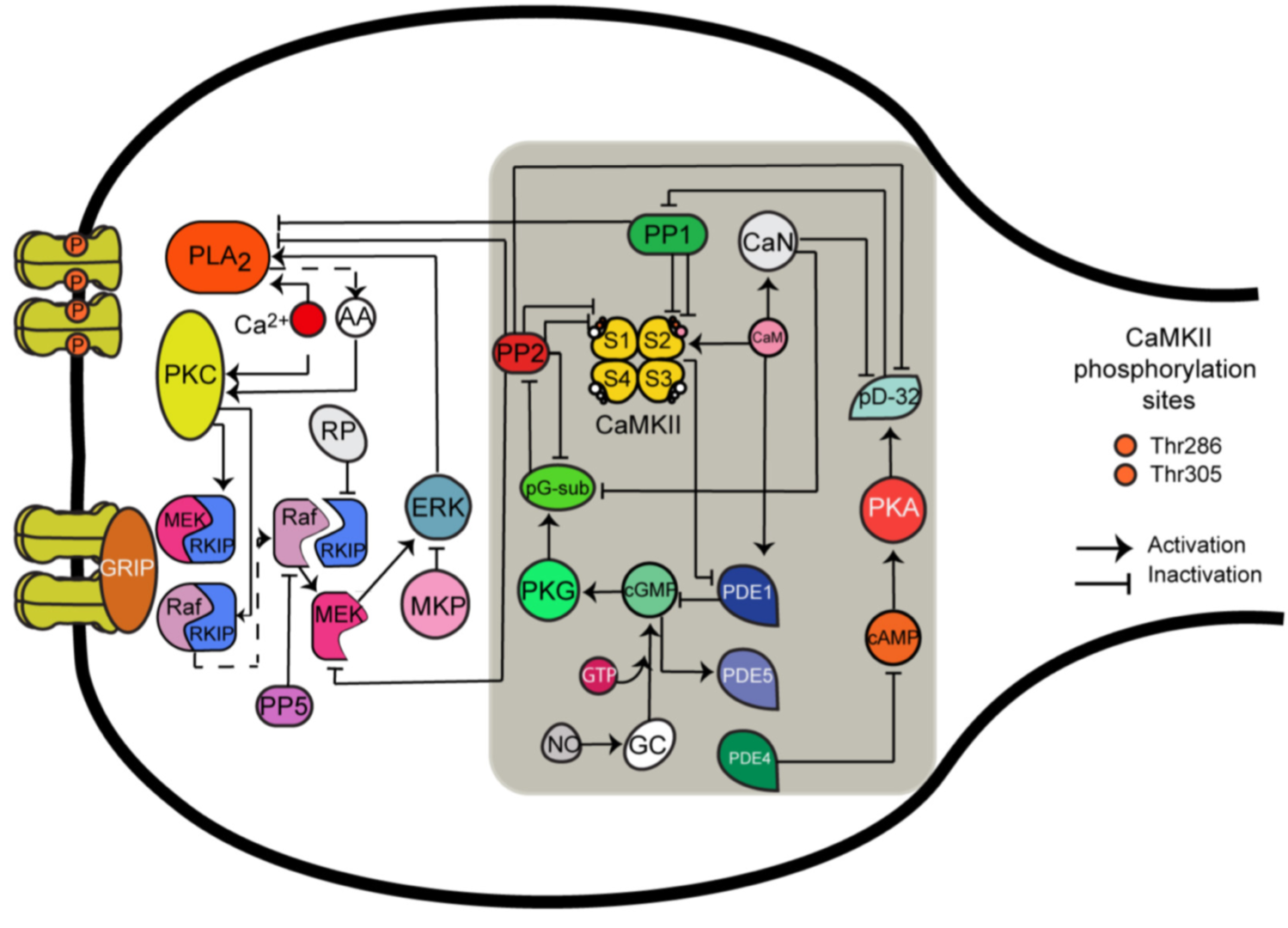 Figure 3: The long-term depression signaling pathway simulated by Zamora Chimal and De Schutter (2018), including the molecular network regulating CaMKII activity at postsynaptic density. Parts of this model were developed by us previously (Hepburn et al., Frontiers in Molecular Neuroscience 2017), the parts in the grey box were added in this study.

We solved this model with the STEPS simulator (Hepburn et al., BMC Systems Biology 2012) to include the effect of biochemical noise in LTD. This stochastic model is bistable: it predicts that at single spines either full LTD or no LTD is produced and the graded LTD observed in vivo is the result of averaging over many synapses (Hepburn et al., Frontiers in Molecular Neuroscience 2017).

Figure 4: PKC activity over time shows bistability. Raw data of PKC over time in the LTD signaling network at different number of Ca2+ pulses. Two different trials were chosen randomly for every number of Ca2+ input. (A) Bistability of PKC activity is clearly visible from 20 to 50 calcium pulses at 1 Hz and (B) from 10 to 30 pulses at 4 Hz (from Zamora Chimal and De Schutter, 2018). 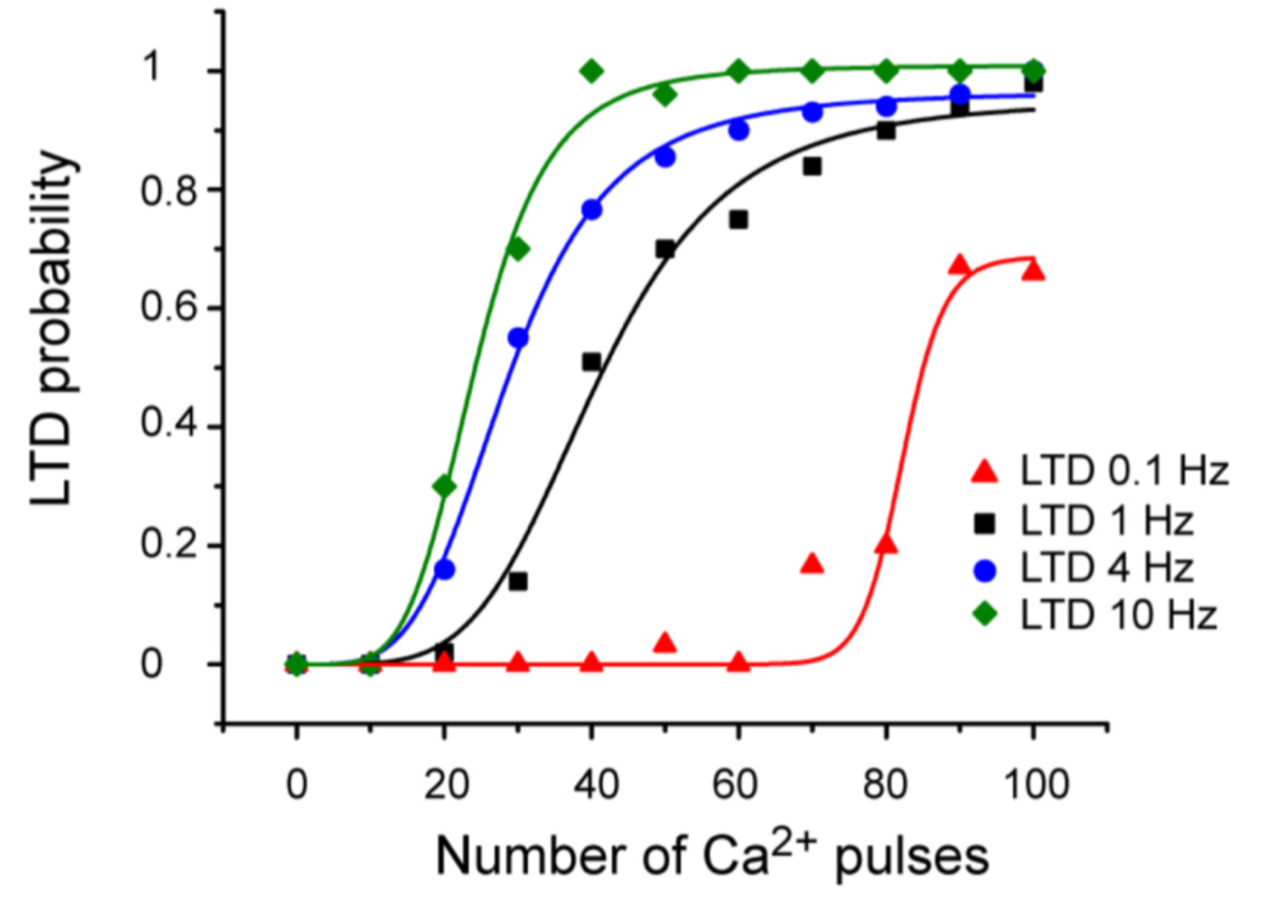 We found that the number of Ca2+ pulses used to induce LTD affected this bistability: there was a specific ranges of Ca2+ pulses for which the response was bistable, below this range there was never LTD and above it there was always LTD (Figure 4). 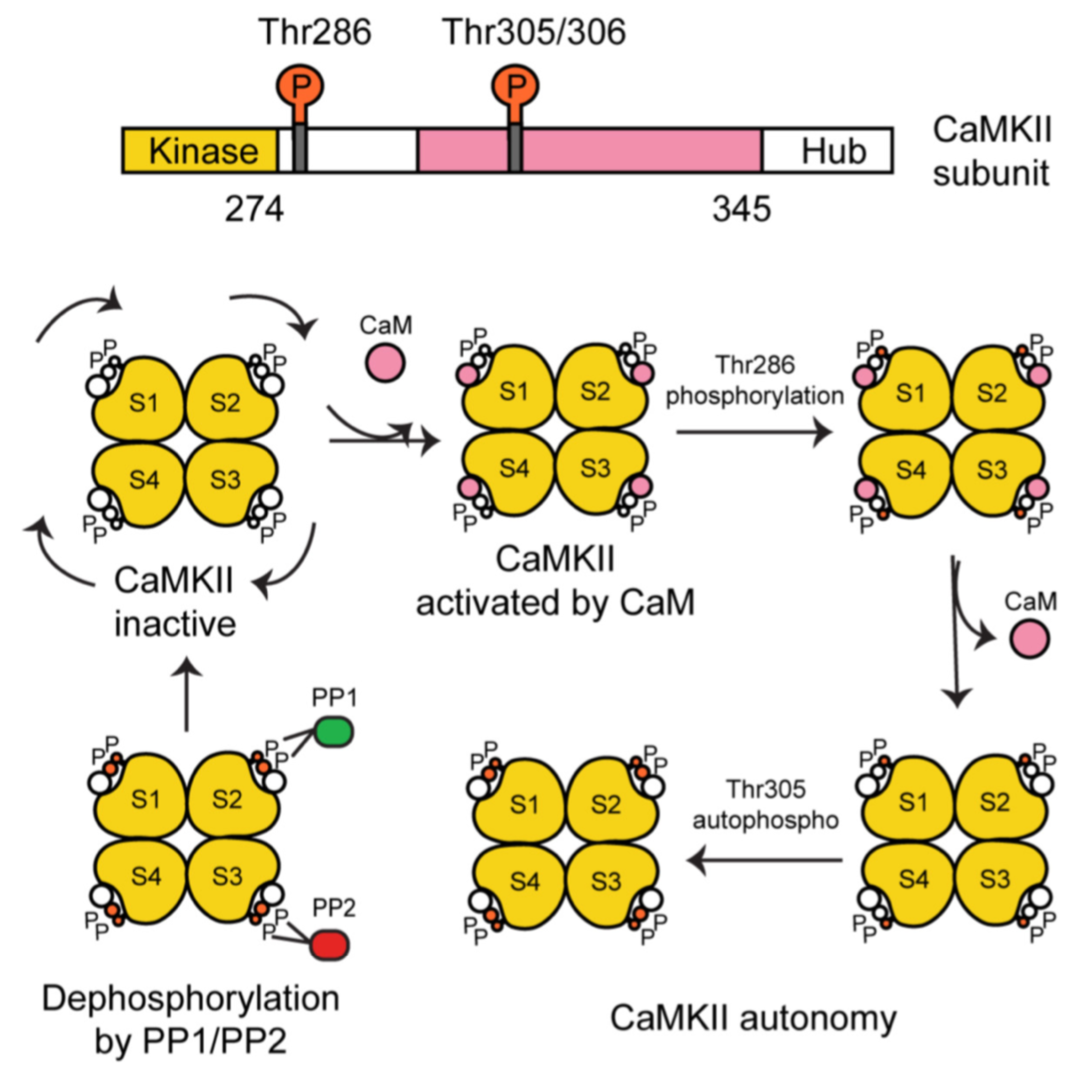 Figure 6: Different phosphorylation sites in CAMKII (top) and all possible states of CaMKII activation in the model (bottom). (from Zamora Chimal and De Schutter, 2018). 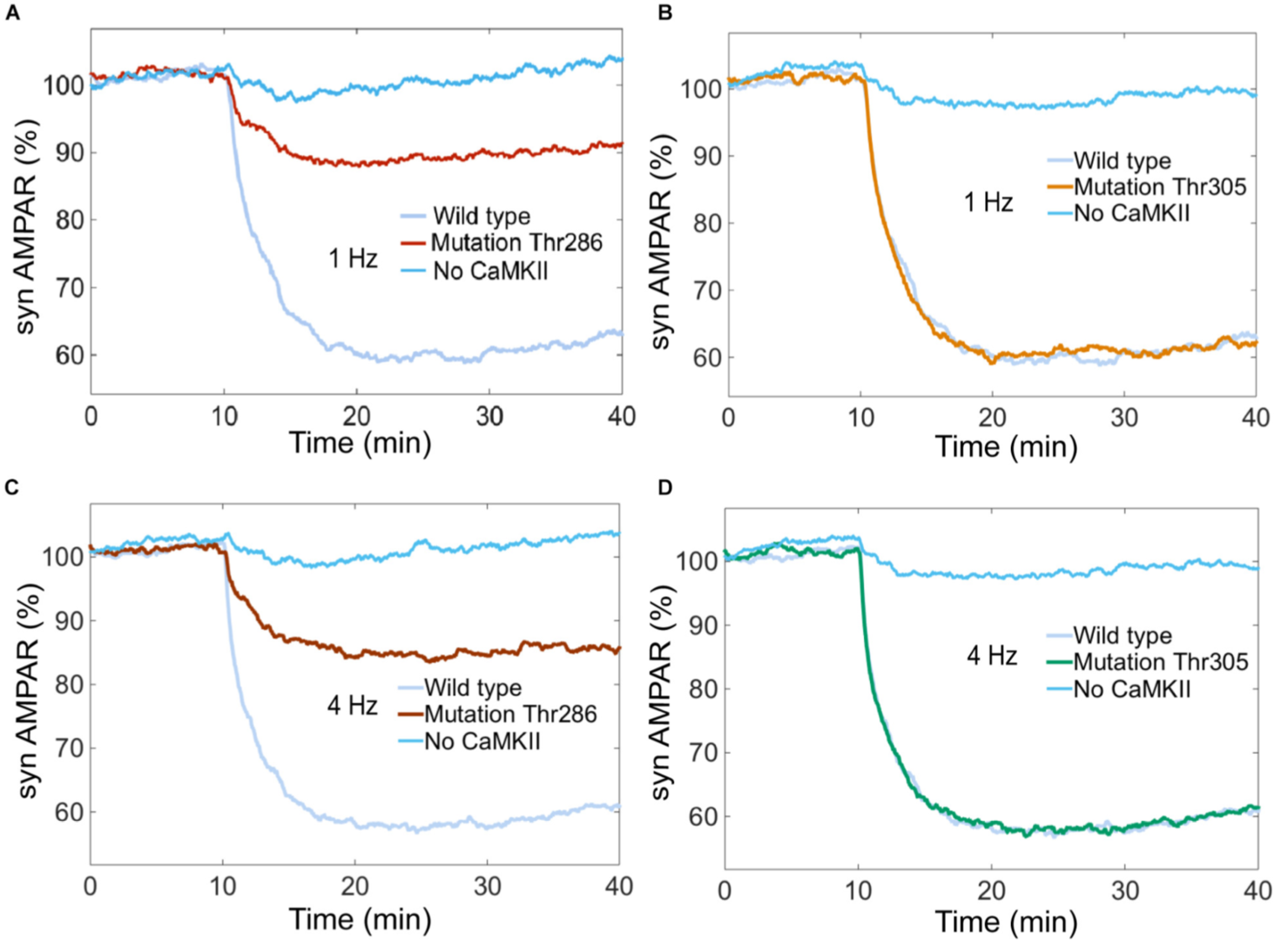 Figure 7: Thr286 phosphorylation site has an important effect on LTD induction. Time courses of depression induced by 100 of Ca2+ pulses at 1 and 4 Hz. Each curve shows the mean time course calculated for 100 iterations of the model. The magnitude of the depression was measured as percentage for synaptic AMPARs when the system is complete (wild type) and mutated at the Thr286 or Thr305 sites. (A) and (C) show LTD impairment when Thr286 phosphorylation site has been deleted for calcium stimulation at 1 and 4 Hz, respectively. (B) and (D) do not show any change in the amount of LTD when Thr305 phosphorylation site has been deleted. (A–D) show that CaMKII activity is required for LTD induction. (from Zamora Chimal and De Schutter, 2018). 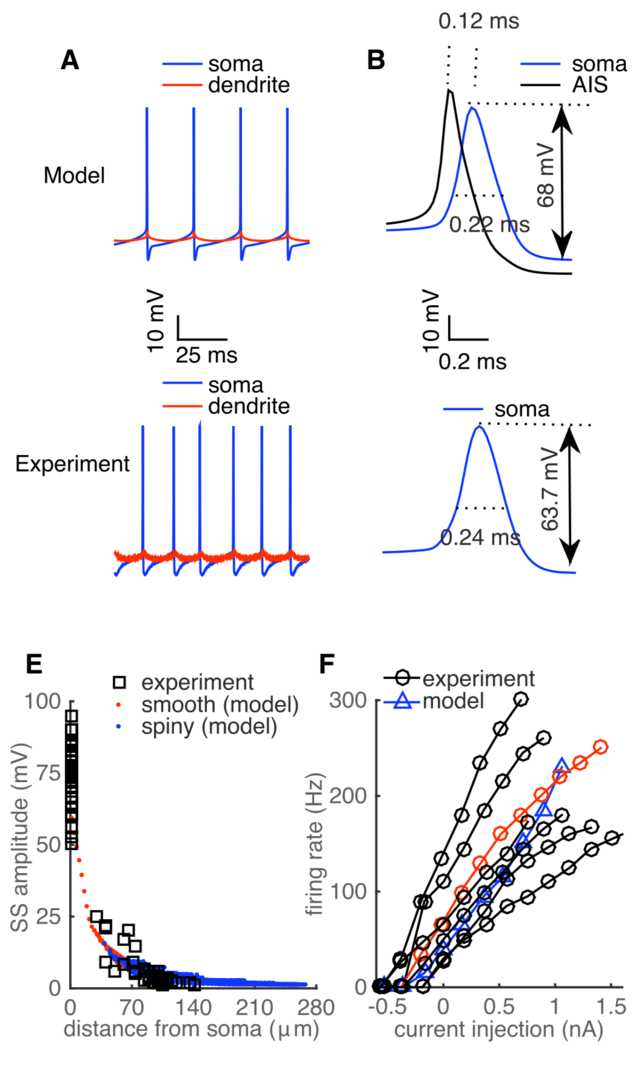 When Purkinje cells receive synaptic inputs from climbing fibers, stereotypical complex spikes occur at their somas. Climbing fiber responses at different sites of a spontaneously firing Purkinje cell model are shown in Figure 9A. The peak dv/dt of the first spikelet in the complex spike is ~270 mV/ms larger than that of the simple spike, as confirmed by in vitro experimental data (Figure 9B). 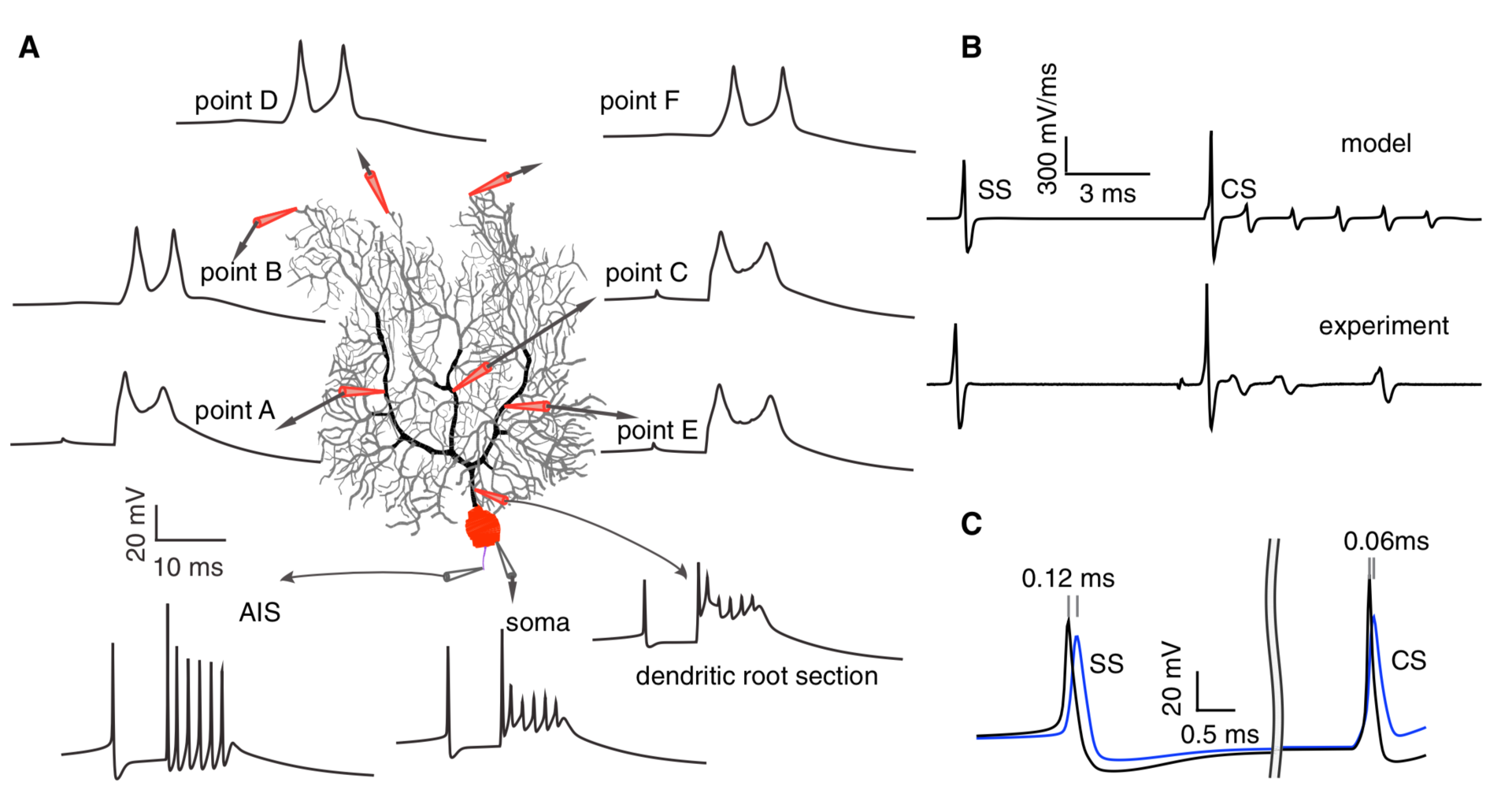 Figure 9: The Generation of climbing fiber responses in the Purkinje cell model. (A) Climbing fiber responses at different sites in the Purkinje cell model. Two sites on each main branch are selected. (B) The peak dv/dt of the first complex spike spikelet increases compared with a simple spike in both model and experiment (Warnaar et al., Front. Cell. Neurosci. 2015).(C) The axosomatic delay of the first spikelet in the complex spike decreases compared with a simple spike (from Zang et al., 2018).

We systematically explored how different voltage states, caused by varying the somatic holding current, regulate climbing fiber-evoked dendritic responses and analyzed the biophysical mechanisms. Depolarization facilitates higher peaks of dendritic responses with further propagation into distal spiny dendrites (Figure 10). In distal spiny dendrites, axial currents from proximal smooth dendrites are the only current sources that can depolarize to approach the Ca2+ spike threshold and trigger a dendritic spike. When the soma is held at 76 mV (Figure 10 left panels), the A-type Kv4 current is larger than the P-type Ca2+ current in spiny dendrites . Consequently, axial currents cause only small passive depolarizations in spiny dendrites. In smooth dendrites, the climbing fiber provides powerful synaptic input to depolarize passively the dendrite. Voltage responses decrease with distance from the soma in the whole dendrite. As the soma is held at 70 mV (Figure 10 central panels), dendritic spikes occur in part of the dendritic tree (the left half, proximal to the soma), where the voltage responses now increase with distance from the soma. With depolarization of the soma to 60& mV (Figure 10 right panels), the Kv4 current gradually inactivates and becomes smaller than the P-type Ca2+ current in both smooth and spiny dendrites during the initial depolarization phase. As a result, the P-type Ca2+ current depolarizes the dendrites and activates more Ca2+ channels in a positive-feedback loop until the Kv3 current is highly activated to repolarize the spikes. Dendritic spikes occur globally and their peaks increase with distance from the soma. These processes makes the energy consumed during a complex spike (CS) also voltage dependent. 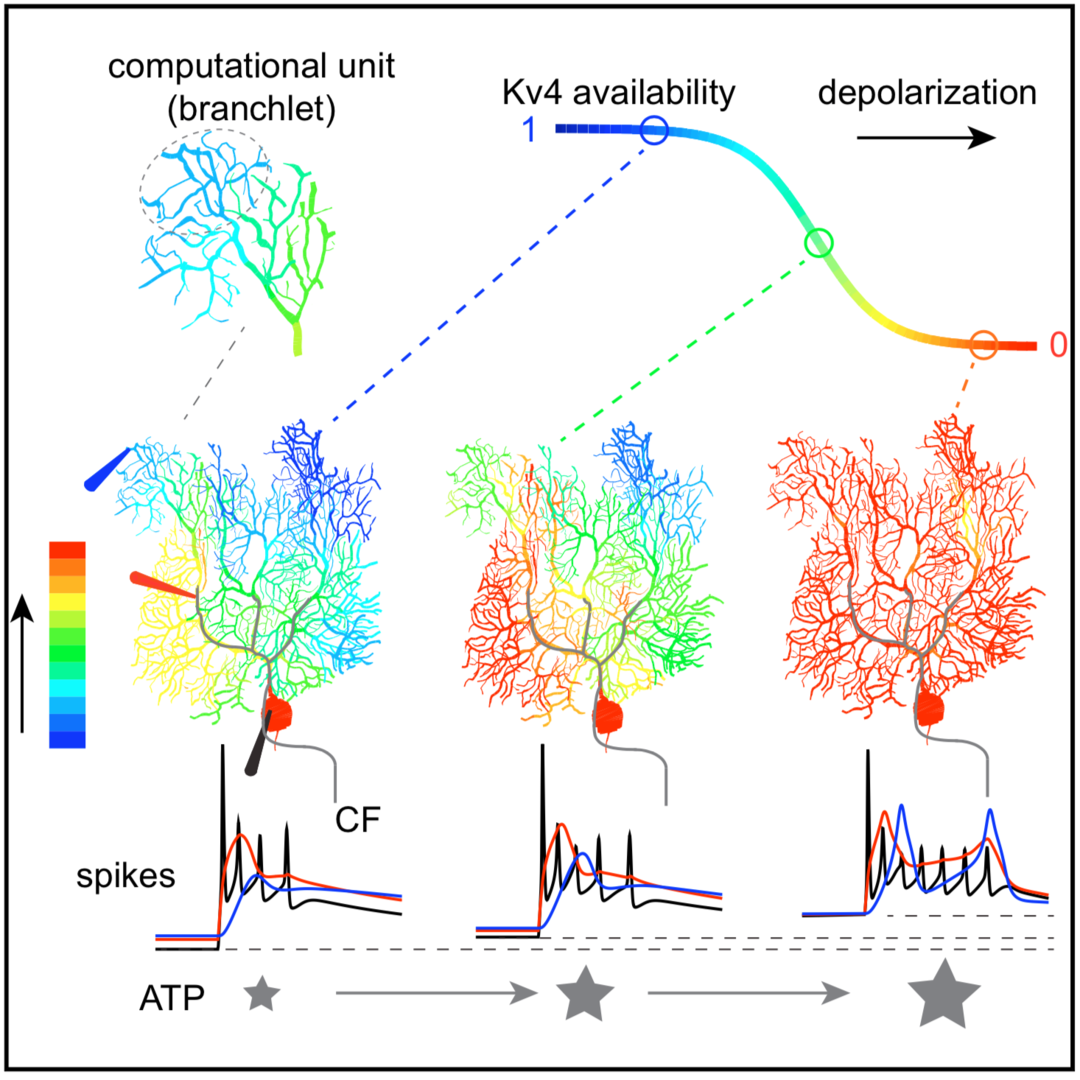 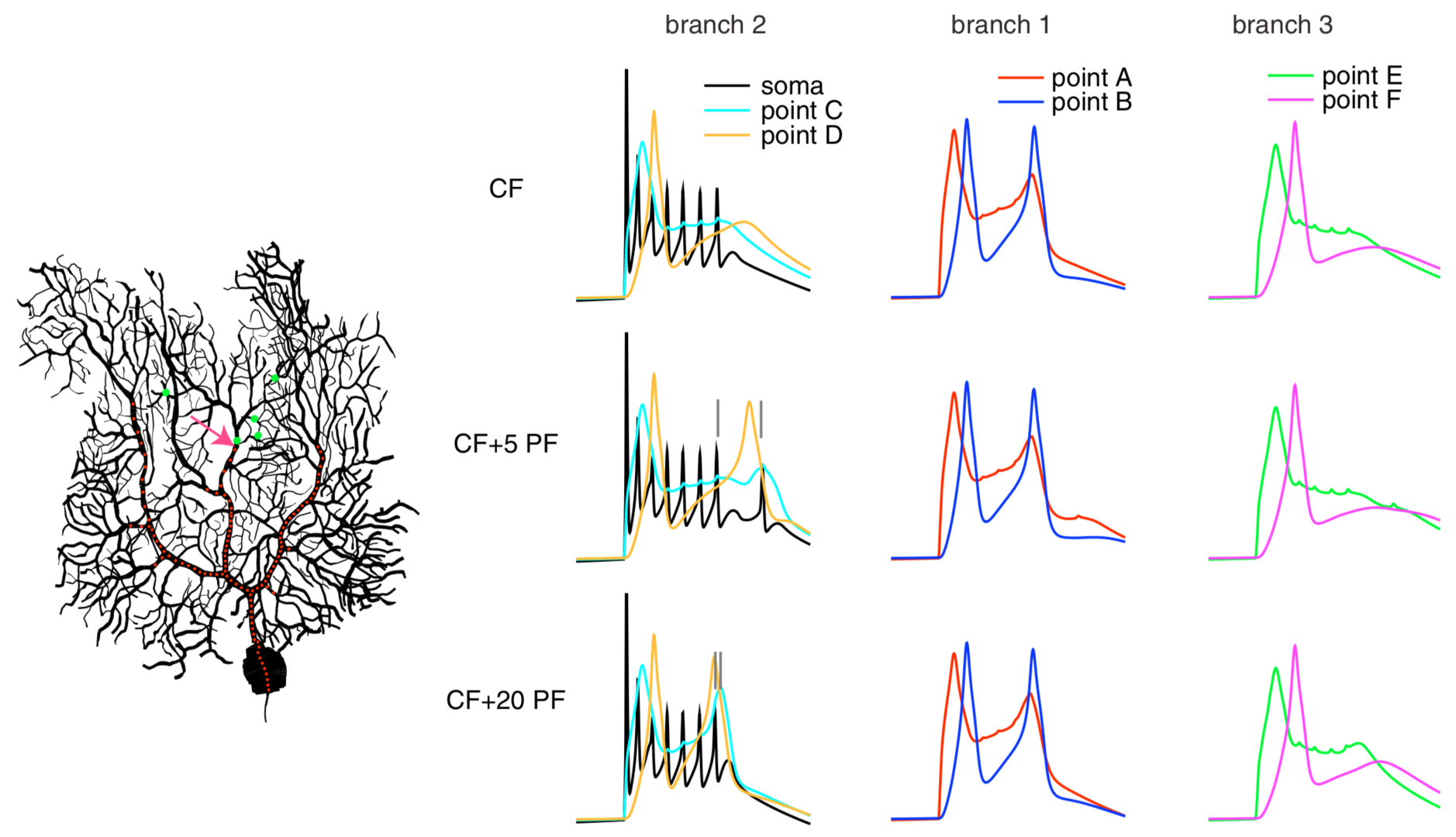 The voltage- and branch-specific climbing fiber responses can increase dendritic computational capacity and enable Purkinje cells to actively integrate climbing fiber signals. They also make it impossible to use the complex spike duration to detect the difference between complex spikes caused by single climbing fiber spikes from this caused by climbing fiber bursts (Mathy et al. Neuron 2009) as done by Yang and Lisberger (Nature 2014), because unobserved voltage changes will have similar effects.