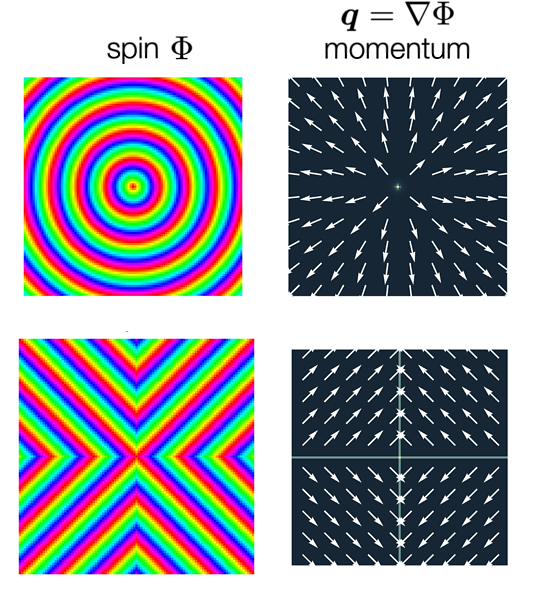 HY’s research interest is in frustrage magnets and spin liquids, as well as intersections between high-energy theory and condensed matter theory.
He is currently a Junior Fellow at Rice Academy of Fellows, Rice University, and is supervised by Prof. Andriy Nevidomskyy in the Department of Physics and Astronomy.
Before joining Rice, HY obtained his Ph.D. from OIST, under supervision of Prof. Nic Shannon in the TQM Unit (co-supervised by Prof. Hirotaka Sugawara). He is the recipient of the Peter Gruss Doctoral Dissertation Excellence Award (2021), the Award for Student Excellence in Graduate Research (inaugural awardee, 2019), and the JSPS DC2 Fellowship (2018 - 2020).

In this work, we identify a previously unexplored type of topological defect in spiral spin liquids -- the momentum vortex -- and reveal its dominant role in shaping the low energy physics of such systems. Spiral spin liquids are a class of classical spin liquids featuring sub-extensively degenerate ground states. They are distinct from spin liquids on geometrically frustrated lattices, in which the ground state degeneracy is extensive and connected by local spin flips. Despite a handful of experimental realizations and many theoretical studies, a concrete physical picture of their spin liquidity has not been established so far. In this work, we study a 2D spiral spin liquid model to answer this question. We find that the local momentum vector field can carry topological defects in the form of vortices, which, however, have very different properties from the commonly known spin vortices. The fluctuations of such vortices lead the system into a liquid phase at intermediate temperatures. Furthermore, the effective low energy theory of such vortices indicates their equivalence to quadrupoles of fractons in a rank-2 U(1) gauge theory or, alternatively, to quadrupoles of disclinations in elasticity theory. At very low temperatures, the system freezes into a glassy state in which these vortices form a rigid network with straight-line domain walls. Our work sheds light on the nature of spiral spin liquids and also paves the way toward understanding their quantum limit.