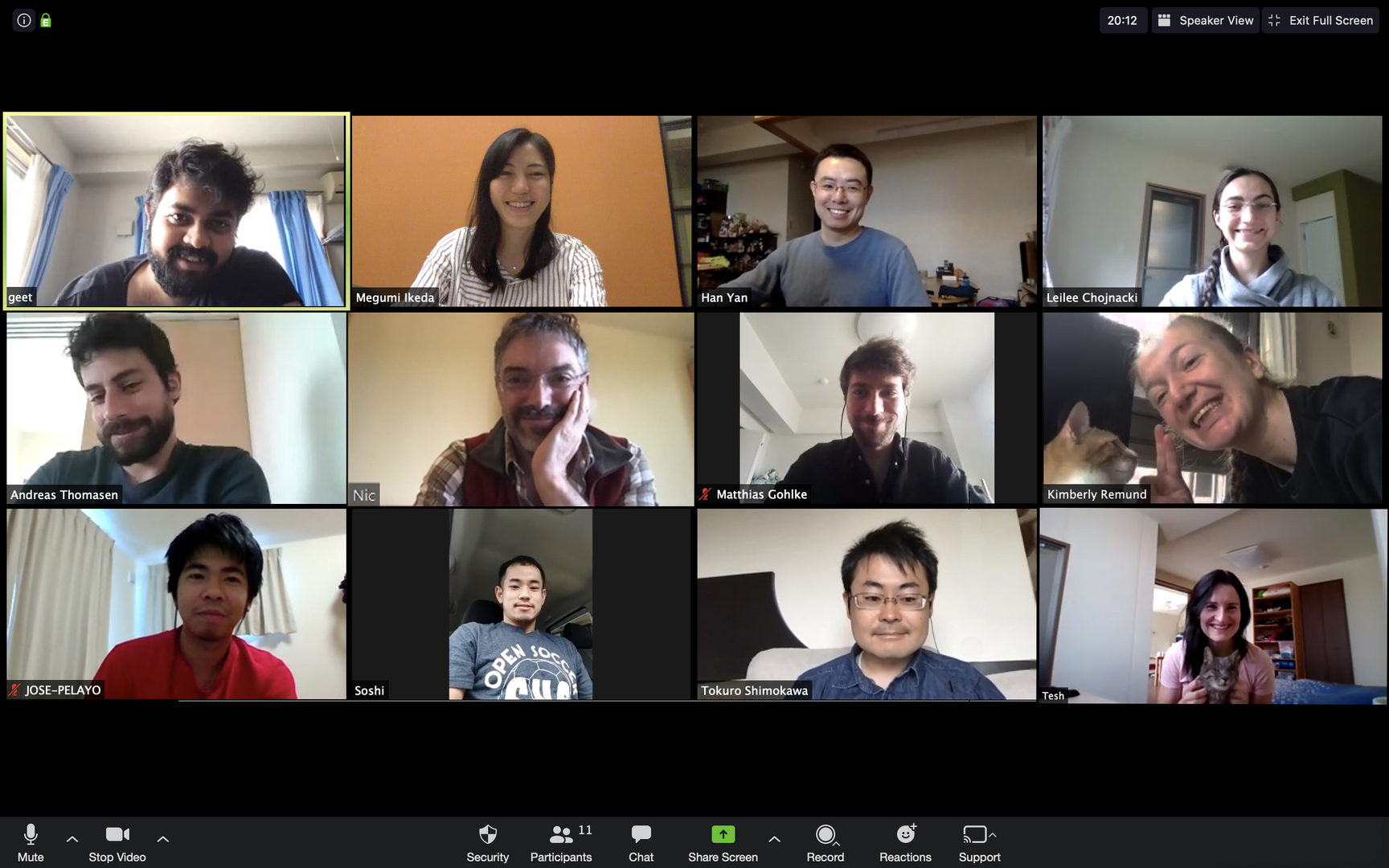 FY2019 was an unusual, but none the less productive, year for OIST's Theory of Quantum Matter (TQM) Unit.    The year began with Prof. Shannon on Sabbatical in Munich, and ended with all travel and scientific events being cancelled as result of the COVID-19 pandemic.

The TQM Unit welcomed a new PhD student, Ms Leilee Chojnacki, and celebrated Dr Judit Romhanyi moving on to a faculty position at the University of California, Irvine.   Meanwhile Han Yan successfully defended his PhD Thesis, and was awarded OIST's inaugural Award for Student Excellence in Graduate Research.  The Unit was also part of a succesful bid for a Grant-in-Aid for Scientific Research on Innovative Areas titled “Quantum Liquid Crystals” (KAKENHI Grant No. JP19H05825).   And the former Unit member, Dr Olga Sikora, succesfully defended her Habilitation Thesis in Poland, based on work carried out in the TQM Unit.

The Unit published 10 papers in FY 2019, including one article in Proceedings of the National Academy of Science, three in Physical Review Letters (one of which was singled out as an Editor's suggestion and featured in Physics Magazine) and six in Physical Review B (one of which was also singled out as an Editor's suggestion).  These covered a range of topics in the physics of quantum materials, and topological phases of matter.

Research highlights included the (probable) identification of quantum spin nematic phases in both volborthite and BaCdVO(PO4)2; the explanation of negative thermal expansion in CdCr2O4; the discovery of a "ripple" phase in honeycomb lattice antiferromagnets; further discoveries about the connections between fractons and holography; and the discovery of a route to fracton phases in real materials and an exploration of the properties of water ice in electric field.   A significant new theme also emerged over the course of the year, namely use of Machine Learning as a tool for solving theoretical physics problems

The Unit remained active in promoting its work, giving a total of 30 presentations in FY2019, including 22 invited talks, among them seminars at MIT, Oxford, and Princeton.   Many of the Unit also participated in the program "Topological Quantum Matter: Concepts and Realisations" at the Kavli Institute for Theoretical Physics (KITP,) in Santa Barbara, which was co-organised by Prof. Shannon.   However two of the most significant conferences in which Unit members were due to participate, the APS March Meeting, and the JPS Spring Meeting, were cancelled as a result of the coronavirus.

The TQM Unit hosted a smaller number of visits and semianrs in FY 2019 than in previous years, both because of Prof. Shannon's sabbatical, and travel restrictions coming from the coronavirus.    None the less 7 researchers did visit the Unit, giving 6 seminars.   And at the end of FY2019, the TQM moved its seminar series online, by way of Zoom.

Outreach activity also took an interesting new turn: the TQM Unit was  the subject of a film commissioned by the American Physical Society for its "APS TV", and a second film, profiling the Unit's former student Rico Pohle, was commissioned by OIST.

2.2 Field-induced pseudo-Goldstone mode and nematic phase in the Kitaev-Gamma model

2.8 Hard plates on a cubic lattice

The holographic principle has played a central role in the modern study of quantum gravity. It states that gravitational theory in a negatively curved spacetime is equivalent to a conformal quantum field theory on its boundary. Many toy models have been built to help us understand holography more intuitively, including the perfect tensor-networks, the bit-threads model, and more recently the fracton model proposed by the author.

In this work, the author proposed that all three types of toy models can be unified under the same picture: geodesic string condensation. Furthermore, a rank-2 U(1) gauge theory, previously discussed in the constex of "fractons", and as a theory of exotic spin liquids, can also be considered as a linearized limit of gravity, and displays holographic properties when embedded in a curved space-time. This work illuminates the how the holographic toy models are connected with gravity concretely.

Machine learning has already revolutionised the way we think about tasks as complex as driving a car.     But can machines also do science ?    In this project, we revisit a challenging problem in condensed-matter physics, the determination of the phase diagram of frustrated magnet, originally studied by Taillefumier et al., [Phys. Rev. X 7 041057 (2017)] (cf. FY2016 Annual Report).   The model in question is the XXZ model on a pyrochlore lattice, and the particular challenge lies in the fact that this supports three different types of spin liquid phases, as well as both conventional, and unconventional forms of magnetic order (cf. upper panel of Fig.).

The machine learning method used was a Support Vector Machine (SVM) with a tensorial kernel (TK) and graphical analysis, previously introduced by  J. Greitemann et al. [Phys. Rev. B 99, 060404(R) (2019)].     This method of machine learning does not require the machine to be "trained" on established examples, and can be "interpreted", i.e. it is possible to interrogate the machine about how it reached its final decision.    Starting from spin configurations taken from classical Monte Carlo simulation, the TK-SVM correctly identified all of the phases found by Taillefumier et al. without any prior information about the type of phases present, completely reproducing the published phase diagram (cf. lower panel of Fig.1) .     Moreover, the machine also correctly identified the organisational principle behind each phase, determining the correct order parameters for each of the ordered phases, and the correct local constraint for each of the spin liquids.

The striking success of the TK-SVM in this case suggests that it will be possible to solve the phase diagrams of complex models without human input.

The most common form of Ice on earth can be considered as a paragon of geometric frustration. In the 1930s experiments revealed a discrepancy in the entropy between spectroscopic measurements and when integrating over the specific heat. This discrepancy stems from an extensive residual entropy caused by the ice rules: a single proton is placed on each of the four oxygen-oxygen link per oxygen site. There are two protons bonded covalently to each oxygen ion forming H2O molecules, while the two other protons form hydrogen bonds. As such the ice rules impose local constraints that prevent the H2O molecules from ordering and leave an extensively degenerate proton subsystem with a finite residual entropy.

In this study, we have been considering a minimal model of hexagonal Ice Ih and how an external electric field affects the proton configuration. Depending on the direction the field is applied, the extensive degeneracy of the proton configurations is either fully or only partially lifted. The latter occurs if the field is applied along certain easy axis and a polarization plateau at intermediate polarization is observed. The remaining ground states within these intermediate polarization plateaus can be described in terms of dimer models on the honeycomb and the square lattice, respectively. Upon tilting the external field slightly away of these easy axis, we observe an order-disorder transition of Kasteleyn type into a plateau at saturated polarization and vanishing entropy. In this work, the transition has been investigated analytically using the Kasteleyn matrix approach and numerically using a modified directed-loop Monte Carlo simulation.

Like Volborthite, described below, BaCdVO(PO4)2 is a quasi-two dimensional magnet, with competing ferromagnetic and antiferromagnetic interactions.    In such systems, it has been proposed that a new state of matter, known as a "spin nematic", can occur in high magnetic fields.   BaCdVO(PO4)2 has previously been discussed as a candidate for spin-nematic order [A. Smerald, H. T. Ueda, and N. Shannon, Phys. Rev. B 91, 174402 (2015)], but until now, relatively little has been known about the experimental phase diagram of this material.

In this paper, we identify for the first time the nature of the magnetic grounds state of BaCdVO(PO4)2 in the absence of magnetic field, and present evidence for the existence of a novel magnetic phase in  applied magnetic field, consistent with predictions of spin-nematic order.   Evidence in support of this conclusion comes from elastic neutron scattering and dynamical susceptibility measurements on powder samples of BaCdVO(PO4)2.   These results, in combination with recent thermodynamics measurements on single crystals [K. Y. Povarov, V. K. Bhartiya, Z. Yan, and A. Zheludev, Phys. Rev. B 99, 024413 (2019)],  establish BaCdVO(PO4)2, like Volborthite, as a strong candidate for spin-nematic order.

Chaotic phenomena in physics are ubiquitous and numerous examples exist in the natural world as soon as one goes beyond the classical two-body problem. These are interesting because while the equations of motion are known, the solutions are generally not known analytically, and their evolution is hard to predict.

Every child learns that water freezes in the cold of winter, and evaporates quickly in the heat of summer.  Scientifically, these transformations between solid, liquid and gas are called phase transitions, and the fact that the same atoms can exhibit different phases lies at the heart of our understanding of the material world.  A fourth phase of matter was discovered, by chance, late in 19th century, when Freiedrich Reinitzer tried to make crystals from molecules of  cholesterol.   Reinitzer noticed that as he cooled his solution of cholesterol towards its freezing point, it underwent a marked change in its physical properties, while remaining a liquid.    This was the first observation of a "liquid crystal", a phase of matter in which rod- or disk-shaped molecules align like the atoms in a solid, while continuing to flow like a liquid.

Liquid crystals have since become an important part of every-day life, and are integral to the displays in most electronic devices.   Meanwhile,  the search for new phase of matter, including quantum analogies of liquid crystals, has become an increasingly important field of research.   One long-sought example is the "quantum spin nematic", in which the quantum state of magnetic atoms mimic the rod-like molecules of a nematic liquid crystal.   The possibility of this new phase of matter was first pointed half a century ago  [M. Blume and Y. Y. Hsieh  J Appl Phys 40, 1249 (1969); A. F. Andreev, I. A. Grishchuk, J Exp Theor Phys 97, 467 (1984)].  And it is now well understood how competing, or "frustrated", interactions between the  ions in a magnet can give rise to a spin-nematic phase [A. V. Chubukov, Phys. Rev. B 44, 4693 (1991); N. Shannon et al., Phys. Rev. Lett., 96, 027213 (2006)].  None the less, despite their considerable interest, quantum spin nematics have proved very difficult to observe in experiment.

In this work, we report the possible observation of a quantum spin nematic in the naturally occuring mineral, volborthite.     Volborthite contains copper atoms which are magnetic, with interactions of type needed to promote a spin-nematic state in high magnetic field [O. Janson et al., Phys. Rev. Lett. 117, 037206 (2016)].  We have probed the magnetic behaviour of the copper atoms by carrying out high-precision measurements of the way in which crystals of volborthite absorb heat, in fields of up to 33 Tesla.    The results we find are consistent with the existence of a quantum spin-nematic phase, at temperatures below 1.5 Kelvin, for magnetic fields ranging from 25.5 to 27.5 Tesla.