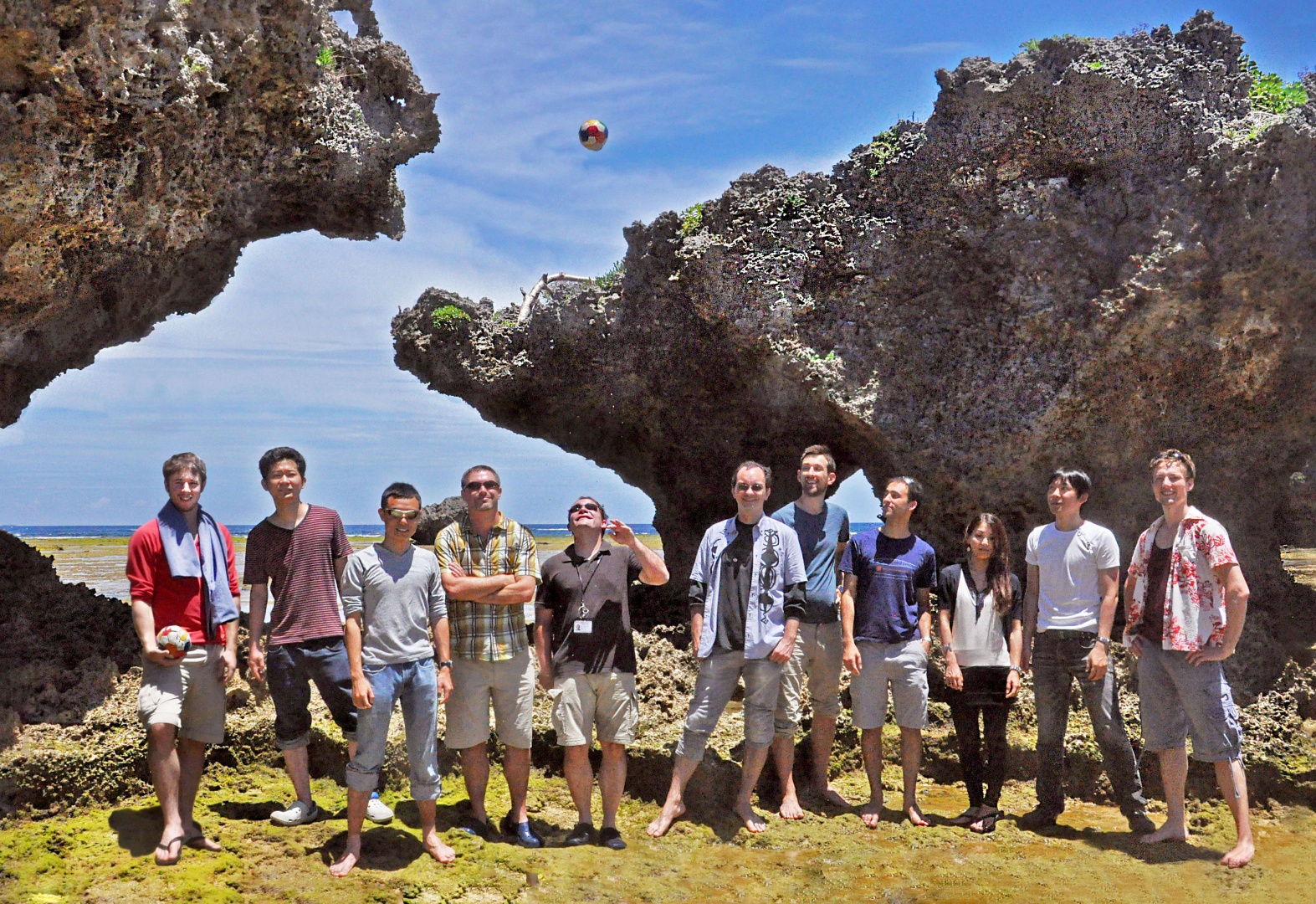 The Theory of Quantum Matter (TQM) unit grew considerably in size during the 2013 Financial Year.  First to arrive was Dr Hiroaki Ueda in April 2013, from Tokyo Metropolitan University.  Dr Ueda was followed by Dr Karim Essafi (Orsay, Paris) and Dr Matthieu Taillefumier (University of Frankfurt). Meanwhile, Mr Rico Pohle returned to the unit as a candidate PhD student.  In August 2013, Dr Andrew Smerald,  a founding member of the unit, moved on to a postdoc position in the group of Prof. Frederic Mila at EPFL, Switzerland.

The unit continued to work on a range of problems in frustrated magnetism, correlated electrons and statistical mechanics.  Scientific highlights included the discovery of a new form of spin liquid on the pyrochlore lattice, and further progress in understanding the ground state of quantum spin ice.  Significant publications included works on the field-theoretical description of excitatons in spin-nematics, the crytsalization of magnetic monopoles in spin ice,  and a paper on the magnetism of thin films of 3He  which was singled out as both an Editor's Suggestion in Physical Review Letters, and a Research Highlight in Nature Materials.

Members of the TQM unit were also active in presenting their findings to the scientific community, giving over 30 presentations at international conferences and research institutions, including more than 20 invited talks.   Unit members participated in 8 international workshops and conferences, including the March Meeting of the American Physical Society, and both the Spring and Autumn Meetings of the Japanese Physical Society.

3.1  Quantum and classical spin liquids on the pyrochlore lattice

Rare-earth pryochlore oxides, a family of materials which includes the spin-ices Dy2Ti2O7 and Ho2Ti2O7, have proved a fabulous resource for exploring the many different types of novel phonomena which occur in frustrated magnets. The TQM unit continues to work intensively on these systems, with research falling into two major sub-themes.

The first major sub-theme these is the construction of a unified theory of magnetic order and spin liquids states in rare-earth pyrochlore oxides with anisotropic exchange interactions. Building on work carried out by Mr Han Yan during his Internship in the TQM unit, Mr Owen Benton has been able to unify the treatment of all known classical phases in a the most-general model of nearest-neighbour exchange interactions on the pyrochlore lattice, discovering a new spin-liquid phase in the process. These results have been validated by very detailed and careful simulations of microscopic models, carried out by Dr Ludovic Jaubert and Dr Matthieu Taillefumier.

In particular, during his visit to OIST in March 2014, Prof. Penc was able to confirm an earlier conjecture that the problem of minimizing dipolar interactions on a pyrochlore lattice reduces to the much easier problem of finding the ground state of a two-dimensional Ising model, with anisotropic, short-range, interactions. This insight permits the complete solution for ordered grounds states, with arbitrary competing exchange interactions.

These results have been cross-checked against classical and quantum Monte Carlo simulation, carried out by Dr Paul McClarty and Dr Olga Sikora, and are now being prepared for publication. 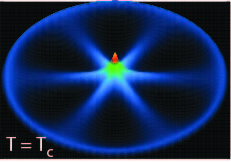 Liquid crystals, states in which molecules select a common axis while retaining the ability to flow, are a key ingredient of modern display technology.  Quantum spin-nematics, the magnetic analogues of the liquid crystals, remain an important research theme in the TQM unit.

Dr Andrew Smerald continued the research on spin-excitations in Quantum spin nematics which he began during his PhD thesis at the University of Bristol, where he was supervised by Prof. Shannon. The first of a series of papers detailing this work was published in Physical Review B [Andrew Smerald and Nic Shannon, Phys. Rev. B 88, 184430 (2013)].  This paper sheds new light on the physical character of spin excitations, and their connection with the symmetries broken by spin-nematic order, using properties of the SU(3) group famous from the theory of Quarks. Animation of spin excitations based on this work can be found here. 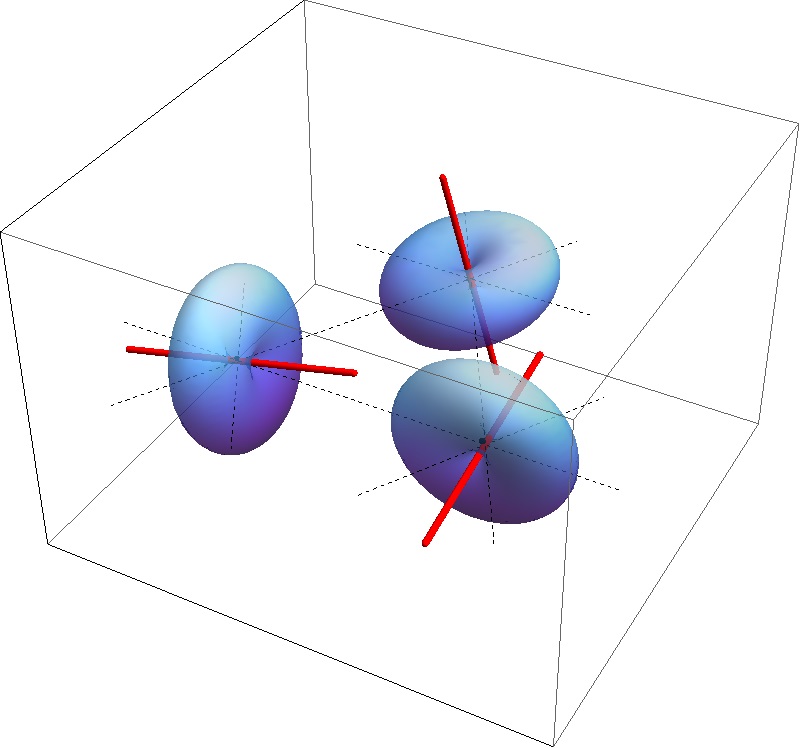 Figure 2: Quadrupolar wave excitation in a quantum spin-nematic, as described by the theory developed in [Andrew Smerald and Nic Shannon, Phys. Rev. B 88, 184430 (2013)].  This theory makes specific predictions for inelastic neutron scattering, which can be used to test for this elusive state of matter.

thesis of Dr Smerald, "Theory of the Nuclear Magnetic 1/T1 Relaxation Rate in Conventional and Unconventional Magnets " was also published in FY2013, having been singled out for by Springer Verlag as an outstanding graduate thesis.   It is now available as an Ebook, in hardback, or for Kindle.

Dr Hiroaki Ueda joined the TQM unit at the beginning of FY 2013, bringing with him considerable expertise on diagrammatic approaches to frustrated magnets.  Since then, Dr Ueda has developed an exciting new research theme in the TQM unit - topological excitations in spin nematics.  At the same time, he has continued his independent work with Dr Tsutomu Momoi (RIKEN) and Prof. Keisuke Totsuka (YITP), publishing results for the high-field behaviour of frustrated ferromagnets [H. Ueda and T. Momoi, Phys. Rev. B 87, 13, 144417 (2013)].

Thin films of 3He offer a unique opportunity to study frustrated magnetism in the extreme quantum limit, with tunable multiple-spin exchange interactions between spin-1/2 3He nuclei

In collaboration with members of the experimental Quantum fluids and solids group of Prof. John Saunders at Royal Holloway, the University of London, Prof. Shannon has explored how such thin films can be used as a model system to study the statistical mechanics of two-dimensional quantum magnets [A. Casey et al., Phys. Rev. Lett. 111, 125302 (2013)].

Figure 3: 3He atoms absorbed onto the surface of graphite form a model system for studying two-dimensional magnetism：The role of competing exchange interactions in two-dimensional ferromagnets was explored in [A. Casey et al., Phys. Rev. Lett. 111, 125302 (2013) ].

This work was singled out as both an Editor's Suggestion in Physical Review Letters, and a Research Highlight "Frustrating Helium" in Nature Materials.

Before joining the TQM unit in September 2013, Mr Rico Pohle spent three months working in OIST's Femtosecond Spectrocopy unit, with Prof. Keshav Dani. There he studied the optical properties of graphene quantum dots. Mr Pohle's return to the TQM unit sparked a series of discussions, which have grown into a collaboration between the two units.

This project, undertaken in collaboration with Dr Eleftheria Kavousanaki, has provided new insight into the real-space character of the electron wave functions in both graphene quantum dots and extended 2D graphene sheets. A paper is now in preparation.

A central question in frustrated magnetism is about what happens when we cool down a crystal to very low temperature. Does the system order ? Does it remain disordered and fluctuate ? A bit of both maybe ? This property takes a new flavour when it is mediated by exotic excitations such as magnetic monopoles in spin ice materials.

In collaboration with researchers from University College London and Ecole Normale Supérieure de Lyon, members of the TQM unit have shown how these magnetic charges, even though they emerge from correlations between spins, can effectively decouple from the underlying spin structure to crystallize over a magnetic fluid background with all the characteristics of a Coulomb phase. These results have been published and discussed in the context of recent experiments on pyrochlore oxides and nano-lithographic lattices in Physical Review X 4, 011007 (2014).

Depending on the experimental conditions of magnetic field, physical and chemical pressure, this magnetic fluid background is strongly multi-facet. As for any fluid, interactions between atoms give rise to short-range correlations. In spin ice, they take the form of topological constraints and loop degrees of freedom, whose statistical properties are currently investigated by the TQM unit with Dr. Karim Essafi. The fluctuations of these topological sectors can be measured experimentally and have shown a non-trivial influence of the demagnetisation [Bovo et al. Journal of Physics: Condensed Matter 25, 386002 (2013)].

Figure 5: Fragmentation of the magnetic moments: The spin configuration on  the left (a) can be seen in two equivalent ways. On one hand, it is a topological defect carrying a magnetic charge (b), while on the other hand, it is also the sum of two magnetic fields with divergence-full (c) and divergence-free (d) properties, respectively responsible for the charge ordering and the magnetic fluid properties of our model.