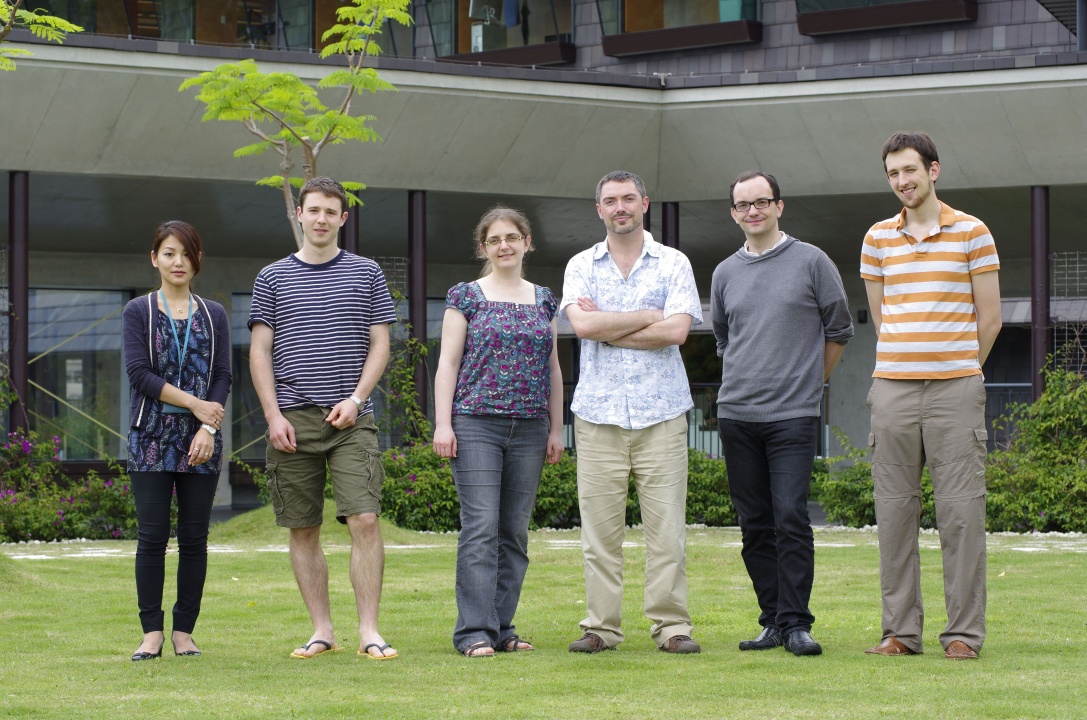 The Theory of Quantum Matter (TQM) Unit came into existence on the 1st October 2011, when Prof. Nic Shannon joined OIST from the University of Bristol.

In the past year, the TQM group has made significant progress in understanding two fundamental problems in the theory of quantum matter - the theory of liquid crystal phases in quantum magnets, and the quantum theory of ice, as well as continuing previous successful research into the properties of frustrated magnets in high magnetic field.

This work has been widely recognised by the community working on quantum magnetism - from April 1st 2011 to March 31st 2012, members of the current TQM group published 8 papers in international scientific journals, and gave over 30 presentations at international conferences and research institutions.

Ice is one of the strangest substances known to man. In water ice, protons occupy the space between tetrahedrally-coordinated oxygen ions.  Each oxygen ion obeys the ‘‘ice rule’’ constraint of forming two long and two short bonds with neighboring protons. These ice rules do not select a single, unique proton configuration, but rather an infinite manifold of classical ground states in which the protons exhibit dipolar correlations, identical to those found in classical magnetostatics.

Recently, there has been great excitement about the discovery of magnetic monopoles in the "spin ice" material Dy2Ti2O7.  Spin ices provide an exact magnetic analogue for the proton configurations in Ih water ice. However quantum effects in these systems remain poorly understood - does the infinite degeneracy of the classical ice states survive at zero temperature ? Or does quantum mechanical tunnelling between ice states convert them into a new form of quantum liquid ?

Using a specially-developed quantum Monte Carlo code [ Olga Sikora et al., Phys. Rev. Lett 103, 247001 (2009); Phys. Rev. B 84, 115129 (2011) ] , members of the TQM group have been able to show for the first time that the zero-temperature ground state of this type system is a new quantum phase of matter in which the classical magnetostatics of conventional ice is converted into a fully quantum-mechanical electromagnetism [ Nic Shannon et al., Phys. Rev. Lett. 108, 067204 (2012) ], complete with photon excitations. In parallel with this numerical work, we have developed an analytical lattice-gauge theory approach to calculating predictions for experiments on quantum ice materials [ Owen Benton, Olga Sikora and Nic Shannon, arXiv:1204.1325 ]. 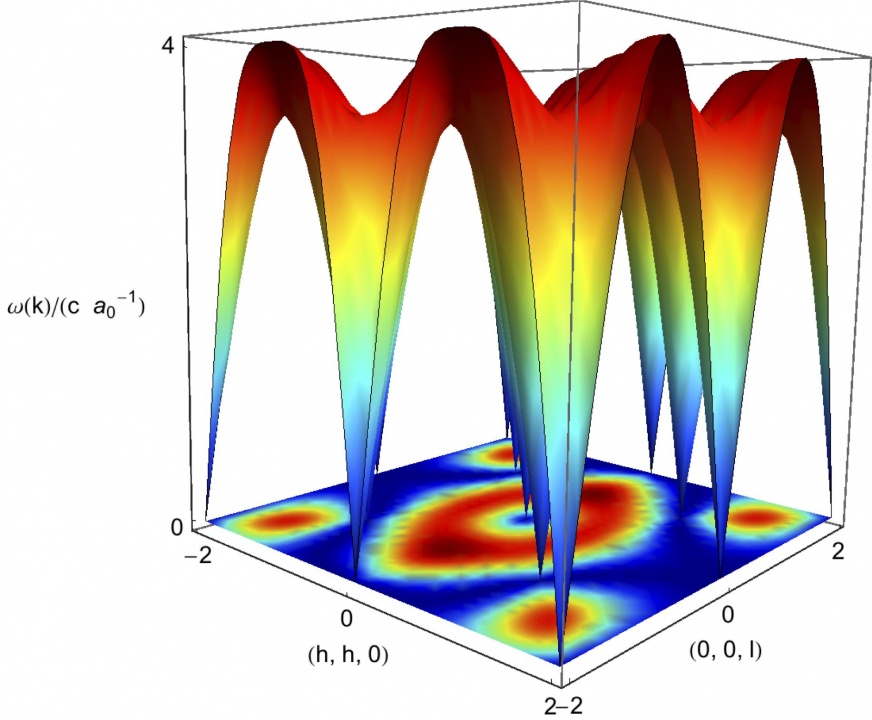 Figure 1: “Light” in a magnet - photon excitations of a quantum spin ice, superimposed on the corresponding diffuse structure which would be measured in a neutron scattering experiment [ Owen Benton et al., arXiv:1204.1325 ].

Liquid crystals are ubiquitous in modern life. The displays of mobile phones and computers alike rely on ``nematic'' phases of rod-like molecules to switch on and off individual pixels of light. The question of whether such a nematic phase could also be realised in a quantum magnet was first posed by Blume and Hseih in 1969. However, despite 43 years of progress in the understanding of quantum magnetism, the existence of such a "quantum spin nematic" phase remains an open question.

In the past decade, the theoretical possibility of a quantum spin-nematic phase in spin-1/2 frustrated ferromagnets was confirmed by numerical simulations [ Nic Shannon, Tsutomu Momoi and Philippe Sindzingre, Phys. Rev. Lett. 96, 027213 (2006) ], and the focus of research has now moved on to establishing its existence in experiment. This presents serious challenges, as the experiments used to probe conventional magnetic order - elastic neutron scattering, nuclear magnetic resonance (NMR), and muon spin rotation, are "blind" to the existence of spin-nematic order.

These experiments can, however, detect the excitations of spin-nematic phases, which mix dipolar spin fluctuations into the quadrupolar correlations of the ground state. Building on an earlier, very successful, theory of NMR T1 relaxation rates in conventional antiferromagnets [ Andrew Smerald and Nic Shannon, Phys. Rev. B 84, 184437 (2011) ], we have developed an SU(3) sigma-model approach to calculating spin excitations in a quantum spin-nematic phase, and used it to make predictions for inelastic neutron scattering and NMR experiments [Andrew Smerald and Nic Shannon, in preparation]. This work should make it possible to finally determine whether quantum spin nematic phases really exist in frustrated ferromagnets.

Figure 2 : Magnetic excitations of the "invisible" quantum spin-nematic state, as seen in a neutron scattering experiment. [Andrew Smerald and Nic Shannon, in preparation].

Frustrated magnets in high magnetic field have consistency proved to be one of the richest sources of novel quantum phases. Until recently, this has been a area in which theory has lead experiment. However recent developments in magnet technology and instrumentation, coupled with the emergence of a range of new magnetic materials, have lead to many exciting discoveries in the laboratory.

Records for measurements in multiple extremes were recently shattered by experiments carried out at the Institute for Solid State Physics of the University of Tokyo, on the prototypical frustrated antiferromagnet Zn2Cr2O4. By means of optical measurements carried out in less than a millisecond, at temperatures as low as 4 Kelvin, in pulsed magnetic fields of up to 600 Tesla, the group of  Prof. Shojiro Takeyama were able to confirm the existence of a novel type of magnetic supersolid [ A. Miyata et al., J. Phys. Soc. Jpn 80, 074709 (2011) ], first predicted by members of the TQM group in 2004 [ Karlo Penc, Nic Shannon and Hiroaki Shiba, Phys. Rev. Lett 93, 197203 (2004) ], but never before seen in experiment.

The iconic problem of the classical Heisenberg antiferromagnet on a triangular lattice in applied magnetic field was also recently revisited by members of the TQM group. Here, using state-of-the art classical Monte Carlo simulation techniques, it was established that the phase transition from the high-field saturated paramagetic phase into the well-known 2:1 canted phase has critical exponents which vary as a function of magnetic field, in clear defiance of conventional wisdom [ L. Seabra, Tsutomu Momoi, Philippe Sindzingre, and Nic Shannon, Phys. Rev. B 84, 214418 (2011) ]. This striking result reminds us that, a generation after the discovery of the renormalization group, there is still much to be learnt about classical phase transitions. 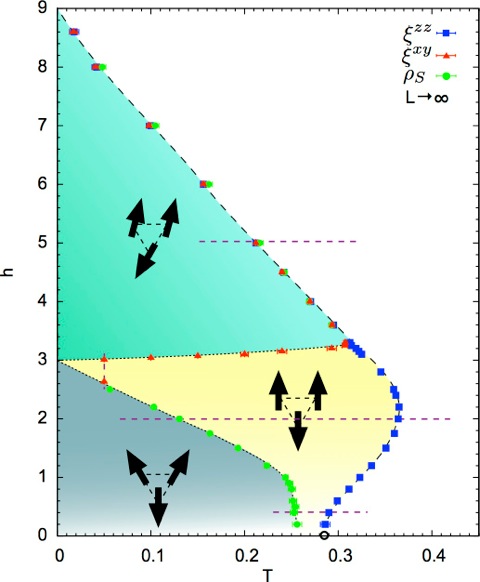 The first papers with an OIST affiliation will be published in FY2012.