The Theory of Quantum Matter (TQM) Unit had a busy year. The group relocated to its new home at OIST at the beginning of September 2012. At the same time, Dr Olga Sikora took up a new position at Taiwan National University, Mr Owen Benton joined OIST as a special student, and Dr Andrew Smerald as a postdoc, having successfully defended his PhD at the University of Bristol. In the course of the year, Dr Ludovic Jaubert was promoted to group leader, and Ms Shiho Saito was reassigned to work full time with the TQM group. Meanwhile, two of the first cohort of OIST graduate students, Rico Pohle and Daisuke Takahashi successfully completed research rotations in the TQM group.

The TQM group remained scientifically active throughout these changes, making significant progress in understanding ``quantum spin ice'' materials - rare earth pyrochlore systems with anisoropic exchange intereactions, and the statistical mechanics of frustrated magnets, described below.   Significant publications included a paper on the statistical mechanics of frustrated magnets in Physical Reviw X, and paper on artificial light, chosen as an editor's selection in Physical Review B, and singled out for special mention on APS website "Physics".

The TQM group also remained engaged with the international scientific community, with members collectively giving more than 24 presentations at international conferences and research institutions, including 15 invited talks.   All group members attended both the March Meeting of the American Physical Society, and the Spring Meeting of the Japanese Physical Society, and Prof. Shannon made an extended visit to the Kavli Institute for Theoretical Physics, Santa Barbara, as an invited participant in their research program, "Frustrated Magnetism and Quantum Spin Liquids: From Theory and Models to Experiments".

Over the course of FY2012, the TQM unit also hosted a Research Intern, Mr Han Yan, and 2 visitors in Oxford, together with 10 visitors at OIST, and participated in the OIST "Quantum Seminar" workshop, co-hosted by the "Light-Matter Interactions" and "Quantum Systems" units.

There has been great excitement in recent years about the spin ice materials Ho2Ti2O7 and Dy2Ti2O7, and their magnetic monopole excitations. However these titanates are just two among a wide range of rare-earth pyrochlore magnets, and there is now growing interest in systems with anistropic exchange interactions, where quantum effects might play a larger role. Building on the very successful Research Internship of Han Yan in summer 2012, members of the TQM group have developed a comprehensive, symmetry-based theory of magnetic order in such materials, which has made it possible to solve long-standing mysteries about spin excitations in Yb2Ti2O7 and Er2Ti2O7 [Han Yan et al., in preparation].

In parallel with this, and in collaboration with researchers at MPI-PKS Dresden, members of the TQM group have also made a study of how quantum effects might modify the properties of Dy2Ti2O7 at low temperatures. Earlier work of Owen Benton and Olga Sikora on the experimental signatures of a quantum liquid in spin ice [O. Benton et al, Phys. Rev. B 86, 075154 (2012)] was selected as an Editor's Selection in Physical Review B, and featured on the American Physical Society website Physics . 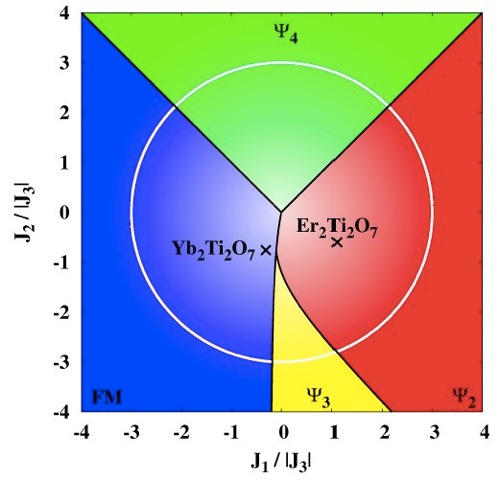 Figure 1: Disentangling order in Quantum Spin Ice : universal phase diagram for rare earth pyrochlores with with anisotropic exchange interactions. The usual properties of Yb2Ti2O7 and Er2Ti2O7 can be explained by their proximity to phase transitions between states of different symmetry [Han Yan et al., in preparation].

First proposed over fifty years ago, quantum spin nematics --- the magnetic analogue of liquid crystals --- remain an enigma. While there are good theoretical reasons to believe that these states should exist, they are also extremely difficult to observe, and conclusive experimental evidence for spin nematic order in quantum spin systems remains elusive. One of the strongest candidate systems is LiCuVO4, and motivated by ongoing experimental work, Dr Andrew Smerald developed a theory of NMR 1/T1 relaxation rates in quantum spin nematics which makes concrete predictions for spin-nematic order 7Li NMR in LiCuVO4 [ A. Smerald and N. Shannon, arXiv:1303.4465v1 ]. This work builds of techniques developed the PhD thesis of Dr Smerald [University of Bristol (2012)], which will be published by Springer Verlag. 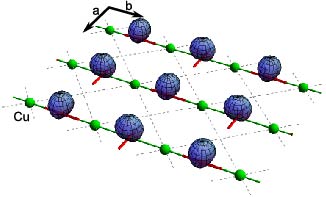 Figure 2: Spin-nematic phase proposed to occur in LiCuVO4 at high values of magnetic field, showing the spin probability distribution for bonds between neighbouring pairs of copper atoms.   Spin correlations transverse to the the magnetic field have the form of a liquid crystal.  Figure taken from A. Smerald and N. Shannon, arXiv:1303.4465v1.

Meanwhile, in an experimental tour de force the group of Prof. Shojiro Takeyama at the Institute for Solid State Physics of the University of Tokyo completed experiments to test the predictions of Penc, Shannon and Shiba [ K. Penc, et al., Phys. Rev. Lett. 93,197203 (2004) ] for the magnetic phase diagram of Cd2CrO4 in multiple extremes of low temperature and high magnetic field. Using ultrafast optics and pulsed magnetic fields of up to 600T, at cryogenic temperatures, these experiments - completed in milliseconds - were the culmination of years of preparation. A full description of this ground-breaking work was published in A. Miyata, et al., J. Phys. Soc. Jpn. 81, 114701 (2012) . 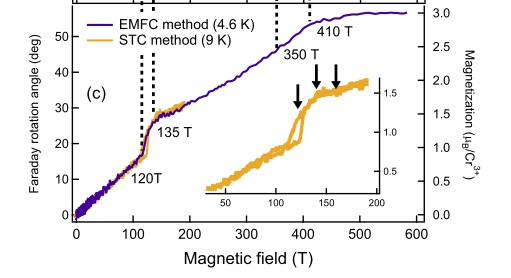 The "spin ice" Ho2Ti2O7 is a widely studied example of a classical spin liquid. Members of the TQM unit, in collaboration with scientists from PSI Zurich, The University of Edinburgh, The University of Waterloo, University College London, and ENS Lyon, have recently been able to solve a long-standing mystery about the temperature dependence of the magnetic susceptibility of Ho2Ti2O7 [Jaubert et al., Physical Review X, 3, 011014 (2013)]. Using analytic techniques and sophisticated Monte Carlo simulations, they have shown this can be understood as a crossover between two regimes: the textbook high temperature Curie law and what we call a "spin liquid" Curie law at very low temperature. These results i) show how the build up of topological fluctuations and correlations can be read from local probes, and ii) brings to light the quantitative limitations of the Curie-Weiss picture for frustrated magnets 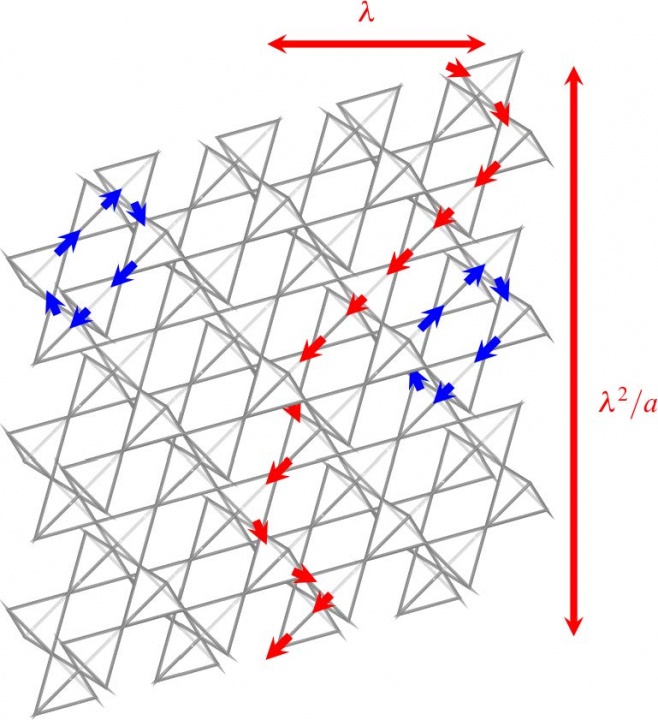