I received my B.Sc. in Chemistry (2003) from the Simon Fraser University officially (British Columbia, Canada), but also took a lot of undergraduate courses from the University of British Columbia (British Columbia, Canada) and McGill University (Quebec, Canada) with probably the most significant courses coming from the latter. During this time after a couple of inspiring courses, I also realized that I wanted to work in organometallics in some capacity, but that I needed a good grounding in organic synthesis. My undergraduate research at SFU involved a brief stay in the Branda lab working on bisthiophene photoswitches until I decided to learn intensive organic chemistry in the Gries lab in the Biology department. This involved determination of pheromone structure from nanogram amounts using GC/MS fragmentation patterns, in consultation with biologists and synthesizing possible structures that might include stereoisomers, diastereomers, and structural isomerism. Chemistry involved Grignard reactions, Wittig couplings, and asymmetric epoxidation and similar, in order to build the hydrocarbon skeleton of a typical moth sex pheromone (10-25 carbon chain with functional groups such as double bonds, chiral epoxides, chiral methyls, etc…) My best work from this time remains unpublished as field tests on a protected heat-sensitive pheromone for a pest moth, where the protecting group was cleavable by sunlight) proved underwhelming for the reviewers, despite showing improvements over control traps. I worked in the Gries lab after graduation for a bit and most of my organic synthetic techniques are heavily influenced by the time spent there.12-14 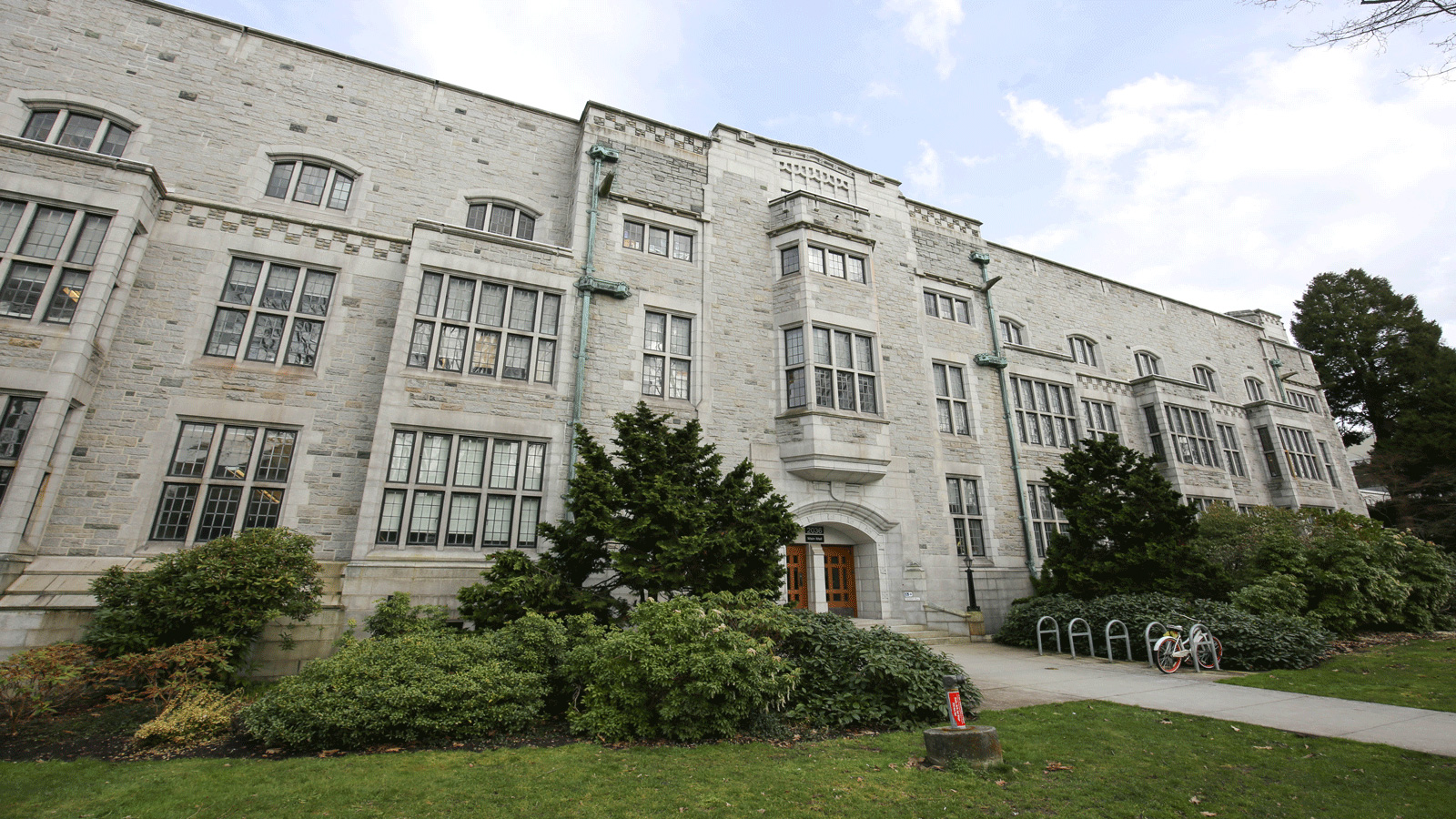 UBC chemsitry building. It actually looks nice, which is hard to say of most chemistry buildings. However, no actual laboratory research is done in the old building anymore and it's only class and office space. I didn't actually take too many chemistry classes at UBC. Most of them were at McGill.

Otto Maas chemistry building at McGill. There is a reason it often doesn't appear in pictures of the McGill campus, which can be found online. Staying late after hiding from security to work on lab reports while there is a -20 degree blizzard outside at night is very memorable however. 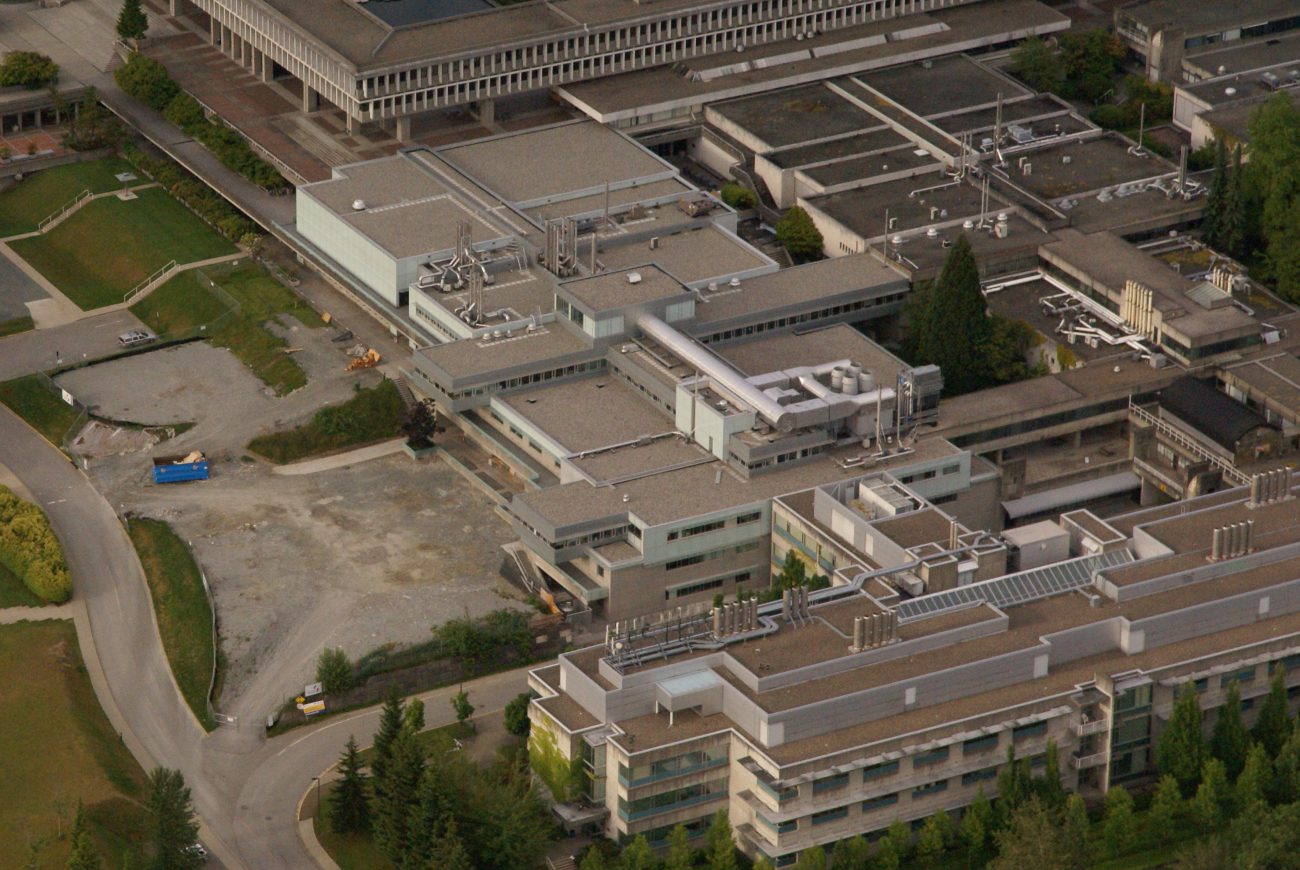 SFU chemistry building. Unfortunately I could not find a picture from before the renovation (this is during) and it's on the upper left. The campus was built in the 1960s all out of grey concrete to unify the disciplines because it looked futuristic at the time. Unfortunately, it may have caused more depression than usual among students 40 years later, but fortunately for the city, the institute served as a common filming location for sci-fi series and movies, including Sliders and X-Files. The old chemistry buildings with it's open ceilings and pipes in dark basements, close to my old lab, often appeared in X-Files episodes as a secret government experimentation facility or similar.

Painted apple moth which was a problem in New Zealand. 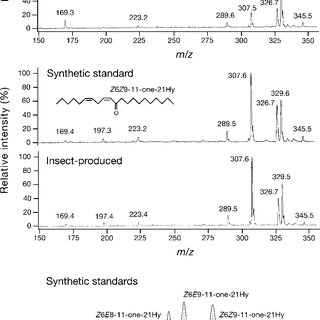 A typical moth sex pheromone is a linear hydrocarbon such as the one above. The animal is very sensitive to it so that a small peak on the GC/FID that often overlaps with other extracted components will give a very huge signal on the parallel GC/EAG (basically gas passing over the insect antenna). This leaves us with limited tools to work with from the GC/MS trace. The pheromone above was only the major component of the sex pheromone mixture. It is not chiral so it looks deceptively simple, but all possible double bond isomers had to be synthesized and we were not sure where the ketone exactly. We hit on the right compound about halfway through all the possibilities. The pheromone also isomerized at the field conditions of a typical jungle, with a half-life of about a day, to the conjugated isomer which was a repellant. This is actually an ingenious way for the animal to tell how old the sex pheromone left by the female is, and whether the location still holds promise. However, this made it impossible to create a viable lure for this particular moth. Putting a protecting group on the ketone does prevent isomerization, but cleaving under field conditions also leaves behind the protecting group residue, which is not that well tolerated by the moth despite the presence of fresh pheromone.

My PhD work (2004-2009) was carried out at the University of Maryland College Park (Maryland, USA) in the Vedernikov group on CH activation with platinum complexes. At first I worked on the aziridination reaction of olefins with simple pyridine ligated copper complexes, but the project was not too interesting at the time, and I only realize now that it was a valuable experience of sorts.  My first platinum project involved the synthesis of bipyridine ligands with sterically hindering substituents in the ortho position in order to improve the CH activation of hydrocarbons by associated Pt complexes in water. This proved to be a viable idea and we could measure significant improvements in CH activation of benzene and cyclooctane in water. However, the system was still far from practical and we never published the manuscript. This is mostly because at the time we found that bispyridil borates work much better for CH activation of all types of hydrocarbon substrates in water and I focused my work there. Over the next several years I synthesized a number of borate ligands using skills from my undergraduate research, and made a number of Pt complexes that were very capable in activating substrates in water, and could be oxidized afterwards with oxygen from air. However the oxidation reaction altered the ligand and the reductive elimination reaction to give functionalized hydrocarbons proved challenging. Despite great progress in fundamental understanding of how CH activation and oxidation works with Pt complexes, and a number of publications,8-11 we could not say that the system had commercial potential at the end of my PhD. At this time, I also published the first (and maybe the last) report on the catalytic Pt transfer hydrogenation of hydrocarbons, whereas all previous reports were stoichiometric ones. Due to the much better performance of iridium and rhodium for this reaction, this report prevented a lot of lost time for researchers who might have been thinking of exploring the same reaction with Pt and the stoichiometric reports dried up afterwards as well.7 During this time I also supervised a number of undergraduate research students, some of whom appear as co-authors (Daniel Lew; Nicholas Anderson) and helped some postdocs8 and new graduate students5 with synthesis.

Catalytic dehydrogenation of alkanes. Rh and Ir can do this reaction 2-3 orders of magnitude better.7 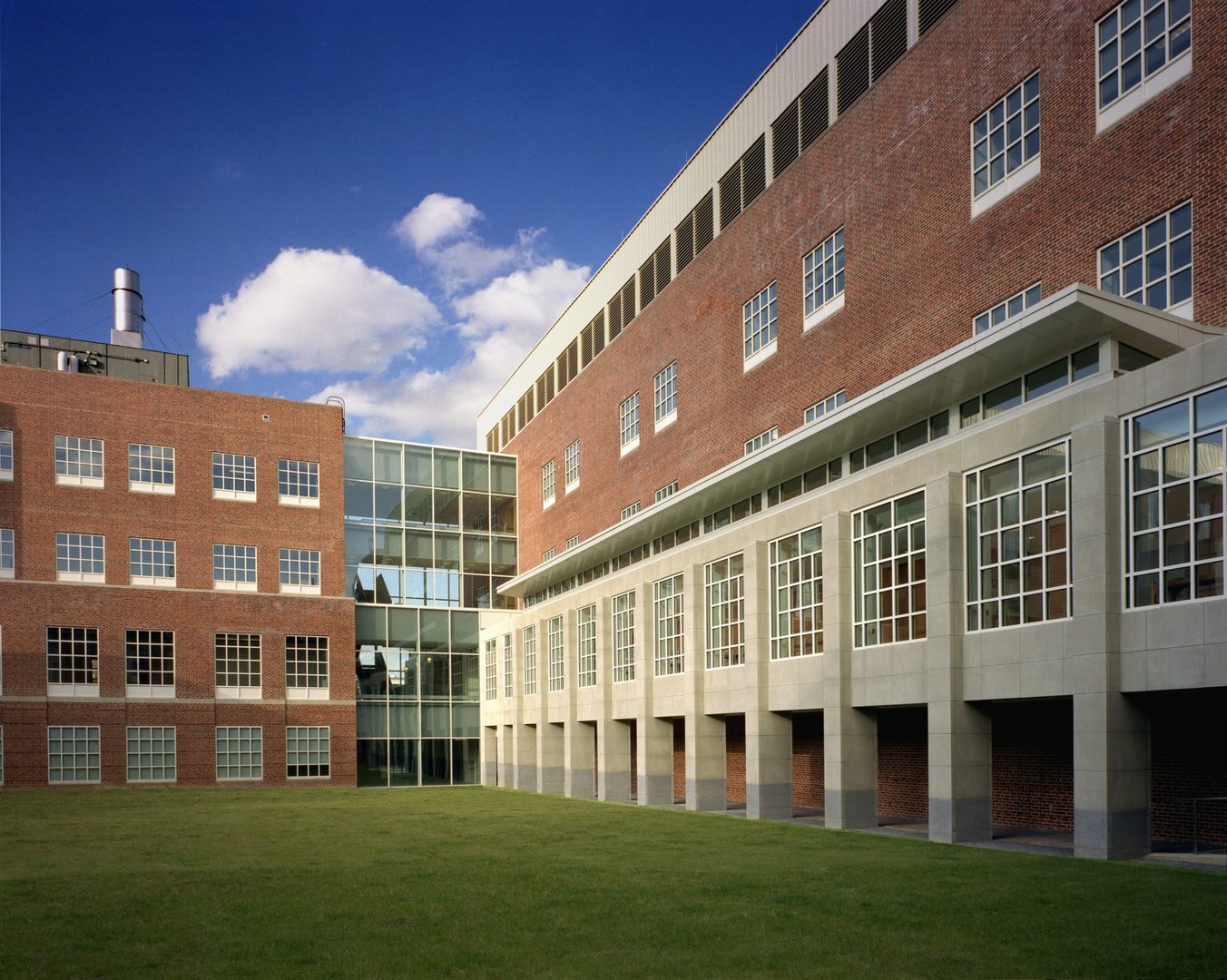 University of Matyland new chemistry building in which my PhD lab was located. On the second floor on the building to the right, I can see the window of the office of the boss (Vedernikov)

My postdoctoral work (2009-2012 and again 2014-2015) was carried out at the Weizmann Institute in the famous organometallic Milstein lab on a wide variety of different projects. The first project was on exploring the activation of ammonia and other amines via metal-ligand cooperation where we proved that a metal and ligand can cleave the N-H bond and bypass the problem of the nitrogen lone pair binding to the metal and shutting down further reactivity.6 Other unpublished projects involved the synthesis of new types of ligands for the mechanistic investigation of acceptorless alcohol coupling catalysis. Later on I worked with cobalt complexes where the impurities in our glovebox proved important in observing a very unusual transformation as the complex lost an H atom equivalent that could be well characterized spectroscopically.3 Published catalytic reactions involved the deuteration of alpha and beta CH bonds of alcohols using a simple system in deuterium oxide, and the acceptorless coupling of alcohols and water to give carboxylic acids and hydrogen gas.2,4 The last work carried out in the Milstein lab in 2015 was supported with OIST funding and can be found under the current research section.

Oxidation of alcohols to carboxylic acids without an oxidant. i.e. acceptorless dehydrogenative coupling of alcohols and water4 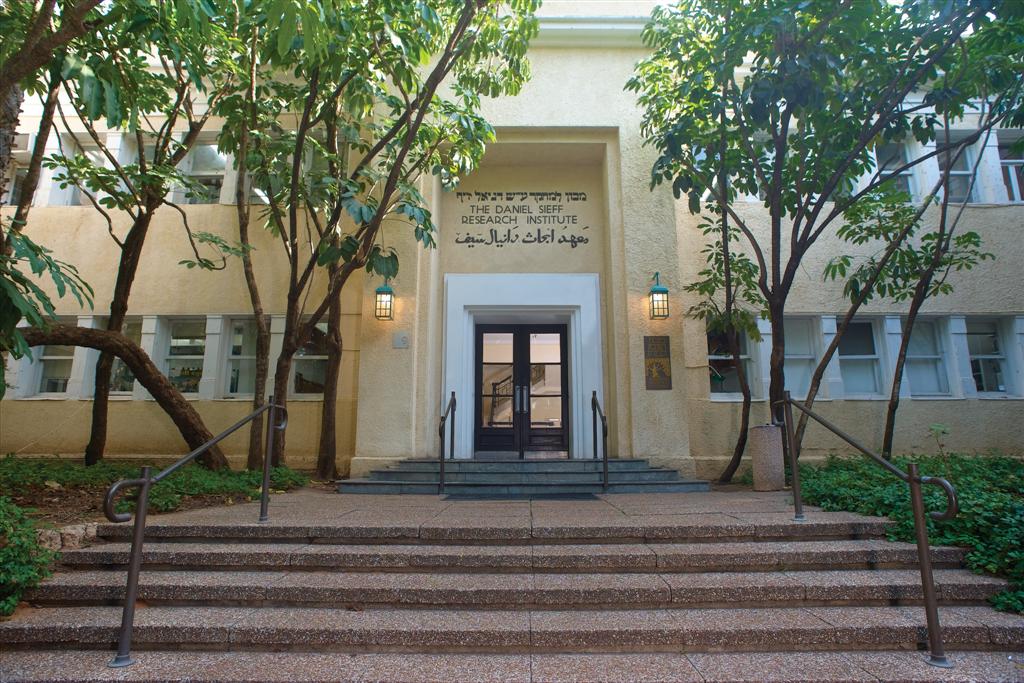 The first building of the Weizmann Institute, the Daniel Sieff Research Insitute built in the 1930s. There is still research carried out here and the Milstein labs take up the entire second floor, along with the Weizmann memorial laboratory and office. Unfortunately the age of the building means it's contaminated with various carcinogens and extermely unsafe. The immediate outside is infested by giant fruit bats and an army of cats, which have been removed for this picture.

Logo of the Weizmann Institute of Science. 'Machon Weizman l'madaa'. The symbol is the tree of knowledge best known from its appearance in the Bible.

Another short research appointment (2013-2014) between my times at the Weizmann was in the lab of Elena Poverenov (who is a former Milstein student and an acquaintance from the Weizmann) at the Volcani Institute. Setting up a new lab in very spartan conditions at the Volcani was challenging but a good learning experience, and we managed to initiate a project on electropolymerization of various films onto stainless steel. Some of those films (poly-pyrroles) could be modified with quaternary ammonium salts, which are known to kill bacteria, and some of those could even be shown to kill lots of bacteria by the Volcani biologists.1 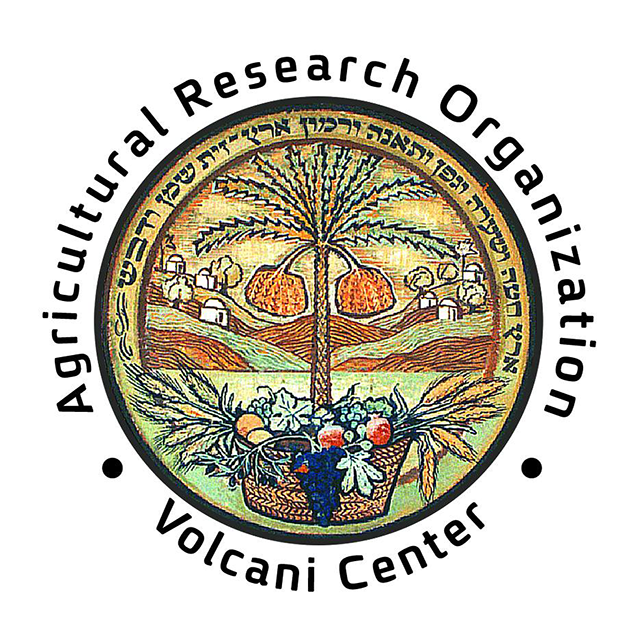 Logo of the Volcani Agricultural Institute which is actually under the Hebrew Institute in Jerusalem but has its own research campus north of Rishon l'Tsion and just south of the Ben Gurion airport, that also contains the ministry of agriculture. The Institute studies a variety of different things as long as they have something to do with food and/or agriculture so the stainless stell that kills bacteria that can spoil food is perfectly okay. There is also a veterinary school. The Hebrew writing lists various fruit found in Israel. 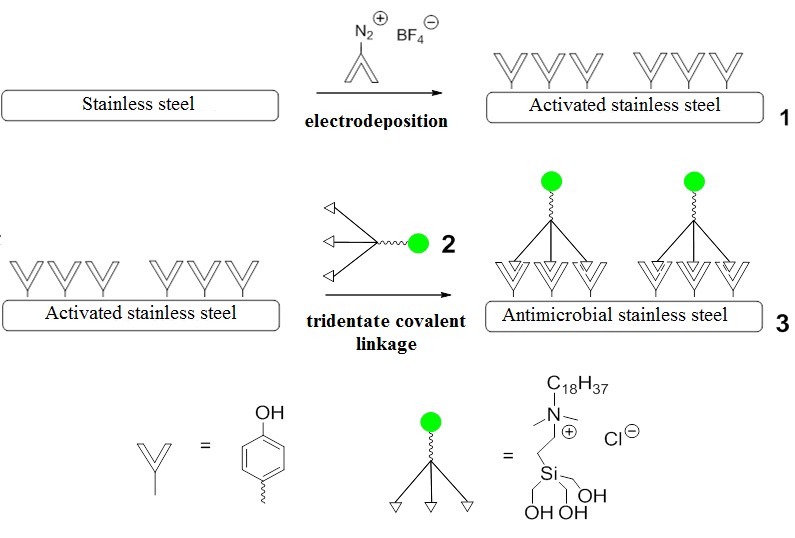 Basic idea behind anti-bacterial surface. The problem is the film. Lots of different polymerization conditions and if it's too thick, it falls off easily.1