In FY2018, we expanded our research activities on quantum systems and their application for quantum technologies. Large portion of these activities is related to our experimental research on electrons on helium. In particular, we showed that our new method of image-chrage detection can provide a new passway towards spin detection and spin qubits on liquid helium. Our experiments in tilted magnetic field realized coupling between electron's orbital quantum states, thus can be potentially used to engineer new quantum states. We started developing a new experimental approach to study many-body phenomena using electrons confined in microchannels, in particular to realize a simulator of the Frenkel-Kontorova model (Jui-Yin Lin, PhD 2018). Finally, we continued developing new hybrid quantum systems based on impurity spin enssembles in diamond for quantum communication and quantum sensing.

We developed a novel method to detect excitation of the Rydberg states of the orbital motion of electrons bound to the surface of liquid helium. The method is based on detection of the image current induced by the motion of the excited electrons in the capacitance plates, see Fig. 1 (left). By applying pulsed modulated microwave (MW) exciation, we could observe the excited Rydberg states up to very large quantum numbers, see Fig. 1 (right).

3.2 Coupling between the orbital states of electrons on helium induced by tilted magnetic field: the Lamb shift of the Rydberg states (in collboration with K. Yunusova, H. Bouchiat and A. Chepelianskii from LPS, Univercity Paris-Sud, France)(link)

We demonstrated that introduction of the component of magnetic field parallel to the plane of a 2D electron system results in coupling between the states of the orbital in-plane motion of electrons (the Landau Levels) and the states of motion perpendicular to the 2D plane (the Rydberg states). In particular, this results in a Lamb-like shift of the energy levels of the Rydberg states due to their coupling to the "quantum oscillator" states of the Landau Levels (LLs), see Fig. 2 (e), which is analogues to the Lamb shift in atom due to their interaction with the quantized sates of electro-magnetic field. 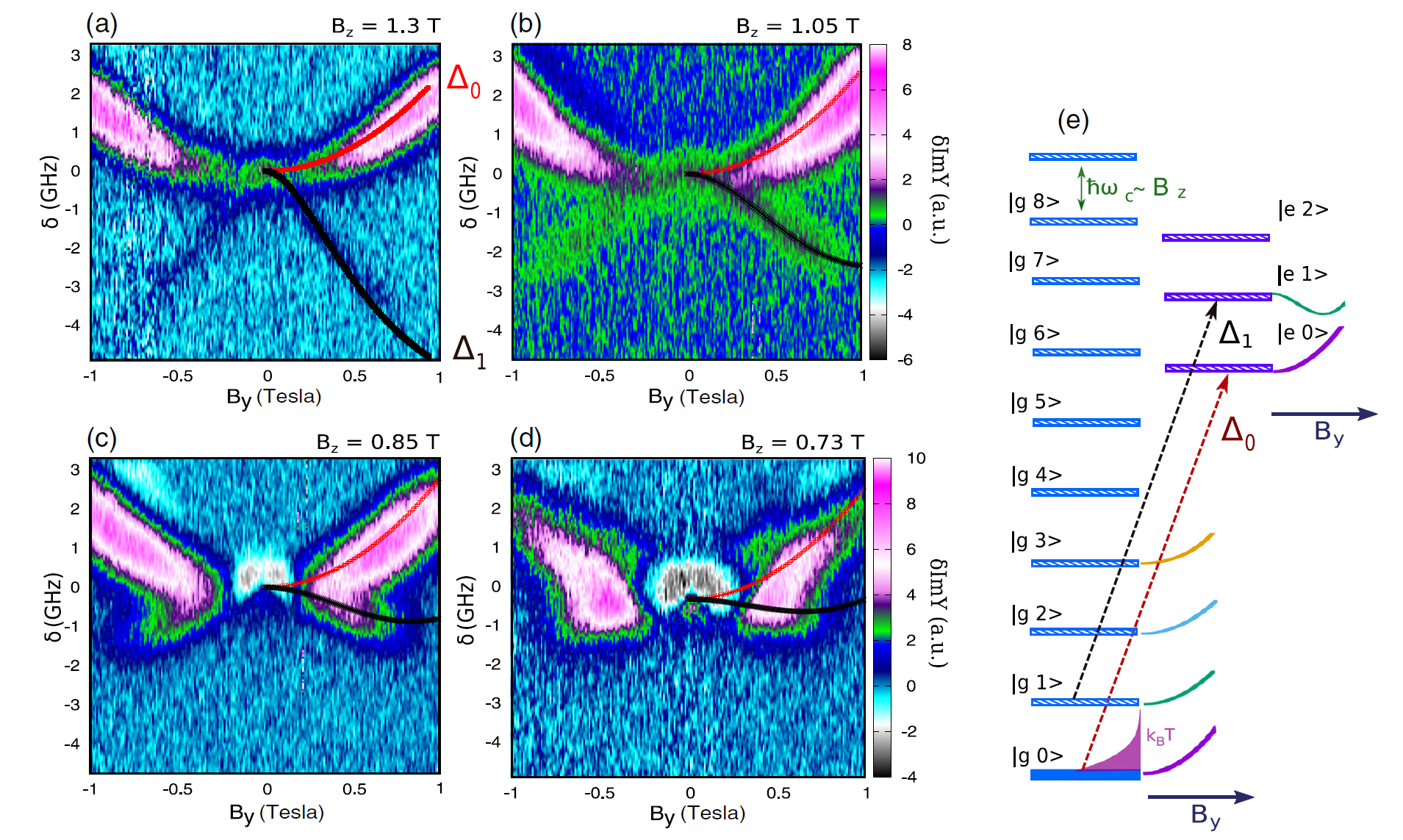 Figure 2: (a-d) The Lamb shift of the transition frequency between the ground Rydberg states and the first two excited Rydberg states as a function of the in-plane field By.  (e) Schematic diagram of the energy levels of an electron on helium and coupling between two LL-manifolds introduced by the in-plane component By of the magnetic field.

In the experiment, this Lamb shift is demonstrated in the 2D system of electrons on liquid helium by measuring the transition frequency between the ground Rydbreg state and the excited Rydberg states using the Stark spectroscopy method, see Fig. 2 (a-d).

3.3 Towards classical simulator of the Frenkel-Kontorova model (J.-Y. Lin, A. Smorodin, S. Zou, in collaboration with A. Badrutdinov from the Microfabrication and Engeneering Support Team, OIST) (link)

We started developing a new exerimental method to study classical many-body phenomena in a strongly-correlated systems, in particular a classical simulator of the Frenkel-Kontorova (KF) model, a chain of interacting particles subject to an external periodic potential, see Fig. 3. 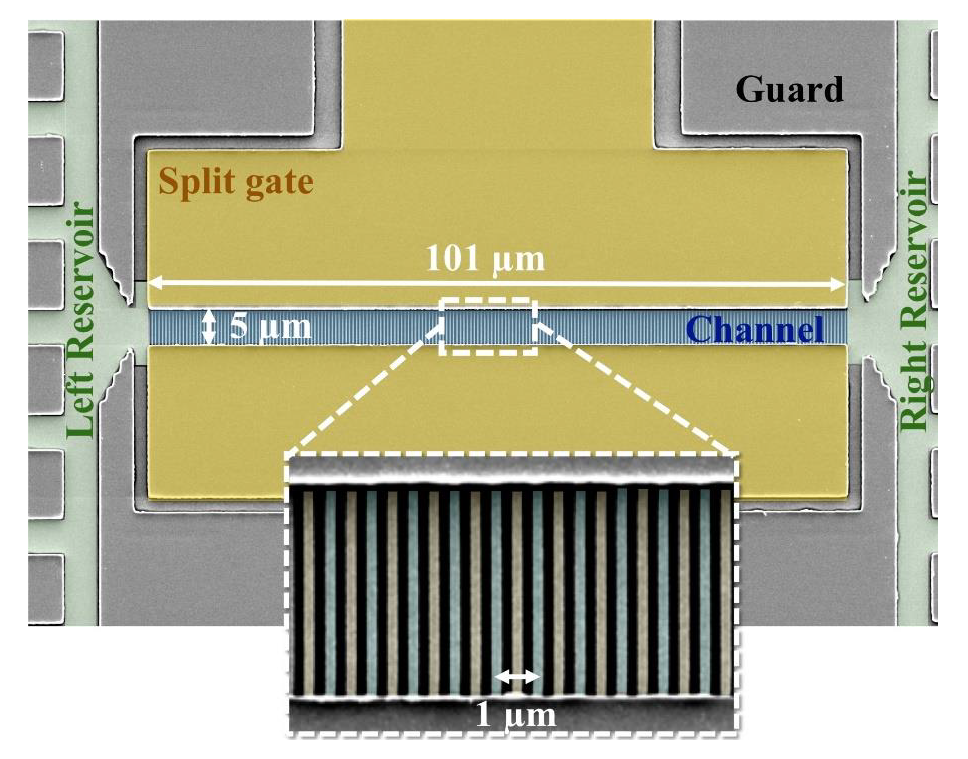 Figure 4: False-color scanning electron micrograph of the device for experiments with electrons on helium subject to a periodic (1 micron) electrostatic potential

In the future experiments, we intend to modify and improve the microchannel device to observe key signitures predicted by teh Frenkel-Kontorova model, such as the Aubry transition and commensurability effects.

3.4 Development of a superconducting CPW microwave resonator for circuit-QED type experiments with electrons on helium (E. Joseph, in collaboration with K. Kono from the National Chiao Tung University, Taiwan)

We started develping a high-Q superconducting coplanar waveguid (CPW) microwave resonators for circuit-QED type experiments with electrons on helium. Such resonators have been already successfully used in experiments with superconducting qubits in many laboratories around the world. In  this work, we used spatter deposition, optical lithography, and plazma etching methods to fabricate a Niobium CPW resonator with resonance frequency ~5 GHz. In particulr, we established that by applying the plasma (ICP) etching in CF6 produces a better-quality device, see Fig. 5. 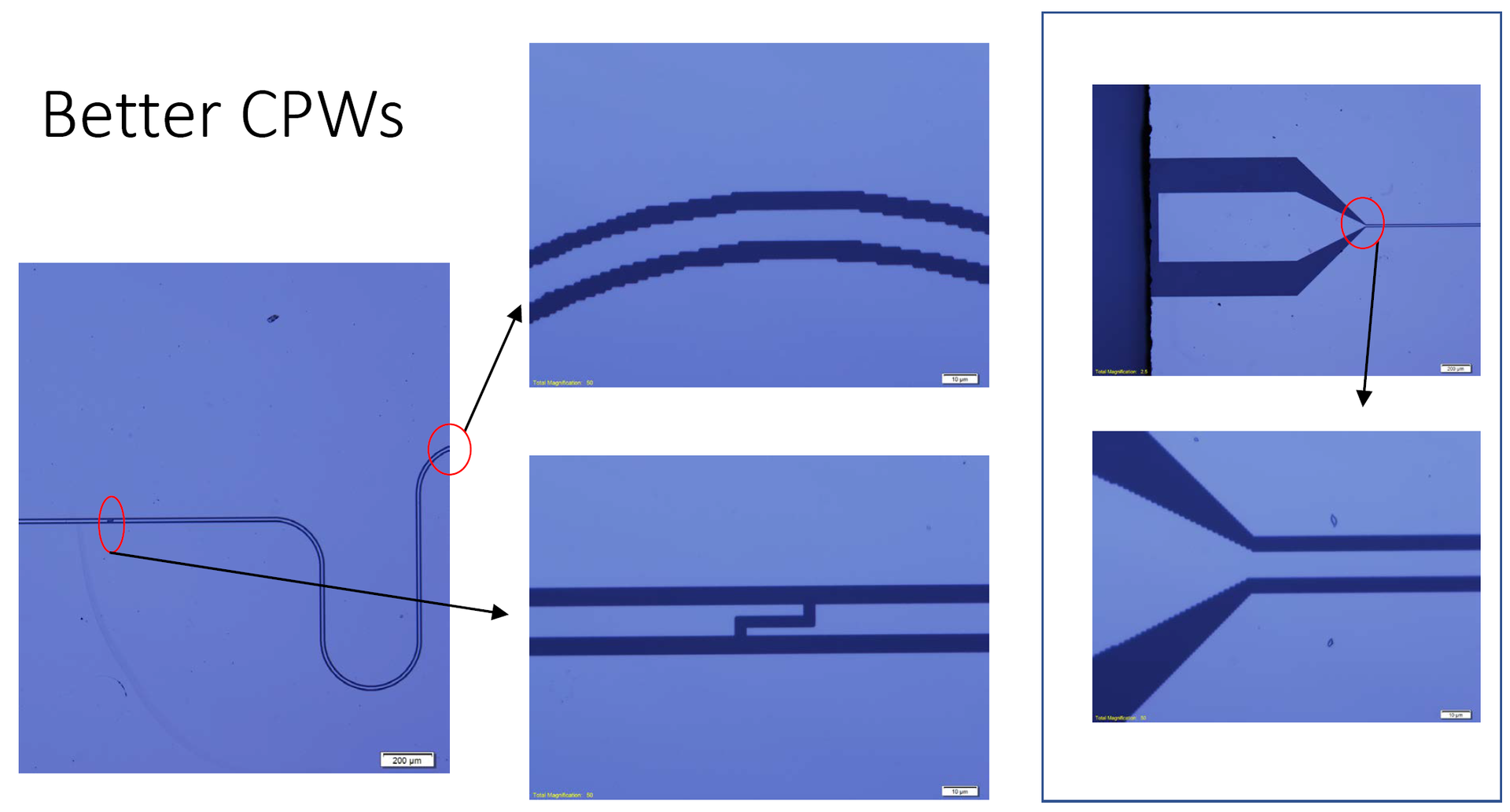 Figure 5: Micrograph of the fabricated Niobium CPW resonators which highlights some delicate parts of the resonator.

In the future experiments, we plan to improve design of the CPW resonator to reach a high value of Q and to observe coupling of an ensemble of electrons on the surface of liquid helium to the resonator.

Quantum information and technologies at microwave frequencies require ultra-low temperature operations, typically at 10 millikelvins in a dilution refrigerator.  Because of the tiny energy of microwave signals at the quantum regime, amplification of microwave signals at millikelvin environments with adding as less noise as possible is thus necessary and the key for quantum information experiments or technology applications.

This has been realized by superconducting Josephson parametric amplifiers (JPA, Figure 1), which are based on superconducting circuits in which Josephson junctions (superconducting tunnel junctions) are embedded.  JPAs are known to have the best noise performance as they typically add noise on the level of a single microwave photon.  However, JPAs have suffered from limited dynamic range, i.e., their very low input saturation power.

We realized an ultra-low noise and super-high dynamic range microwave amplifier based on maser effect, an acronym of “microwave amplification by stimulated emission of radiation”, with nitrogen spins in diamond, which is so-called P1 centers.