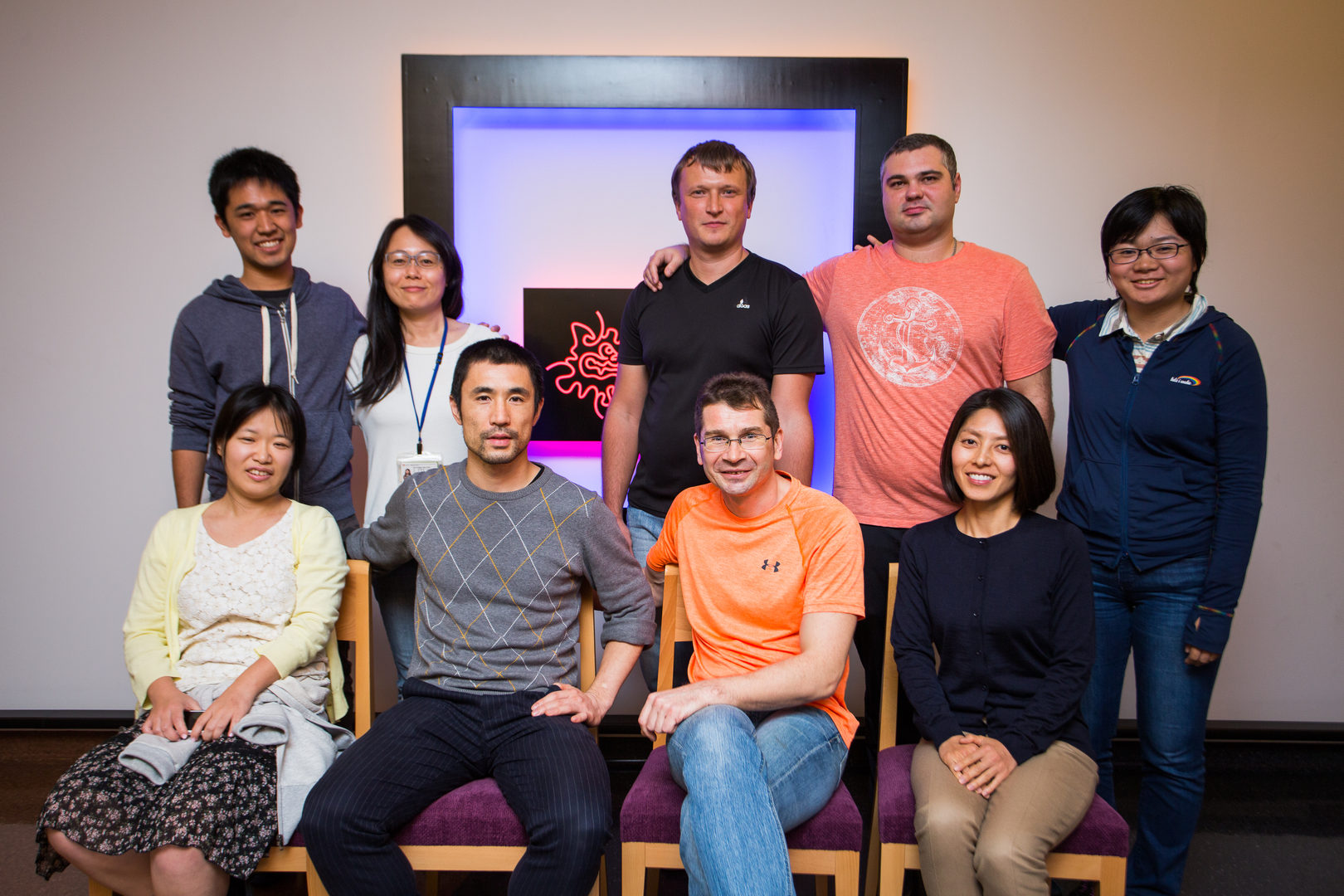 In FY2016, we continued our studies of microwave-induced phenomena in 2D electrons on liquid helium, in particular the strong coupling regime of interaction bewteen 2D electrons on liquid  helium and a single-mode microwave cavity resonator, as well as studies of electrical transport of 2D electrons confined in microchannels. We continued our studies of coupled electron-nuclear spin ensembles in solid antiferromagnets, in particular probing the predicted Bose-Einstein condensation of nuclear spin waves by the nonlinear NMR measurements. Finally, we successfully launched low-temperature experiments to study the electron spin resonance (ESR) in NV (nitrogen-vacancy) and P1 (substitutional nitrogen) centers in diamond.

2.2 Theme: Transport of electrons through a microchannel T-junction

3.1 Ripplonic Lamb shift of the Rydberg energy levels in electrons on helium (in collboration with Mark Dykman from Michigan State University) (link)

An electron on helium presents a unique clean quatum system. The orbital motion of such an electron perpendicular to the surface is quantized into a set of Rydberg states, and the energy levels of these states experience a shift due to the interaction of electron with the quantized capillary waves (ripplons), see Fig. 1 (left) . As in QED theory, the coupling between this quantum field of surface oscillations and electron leads to the diverging terms in the energy shifts, an analog of the ultraviolet catostrophe. We showed that there is cancelation of different divergent terms, thus reproducing an experimentally observed finit shift of the transtion frequency, see Fig. 1 (right).

Figure 1. (left) Artistic represenation of an electron above the surface of liquid helium disturbed by capilary waves (ripplons). (right) Ripplonic Lamb shift  (squares) measured for electrons at different temperatures. The red line is our theoretical result obtained without any adjustable parameters.

Last year we reported observation of the strong coupling regime of interaction between an ensemble of 2D electrons on liquid helium and a single-mode Fabri-Perot cavity resonator (see FY2015 Annual Report). This year, we have significantly improved our experimental setup, in particular achieving more than order of magnitude improvement in the quality factor of the resonator. This allowed us to observe several new features. First, we were able to resolve two modes corresponding to the right-hand circular polarized (or "active") mode showing two hybridized polaritonic branches of the cavity resonance, and the left-hand circular polarized (or "passive") mode showing no hybridization, see Fig. 2 (top), as should be expected. However, we have also observed an unexpected "faint" resonance revealed by taking the derivative of the power reflection signal, see Fig. 2 (bottom).

We have speculated that this resonace can originate from the "passive" mode due to the second-order (Raman) scattering processes involving ripplons. However, our calculations showed that such processes are to slow and can not account for the observed results. Further invetsigation is required. 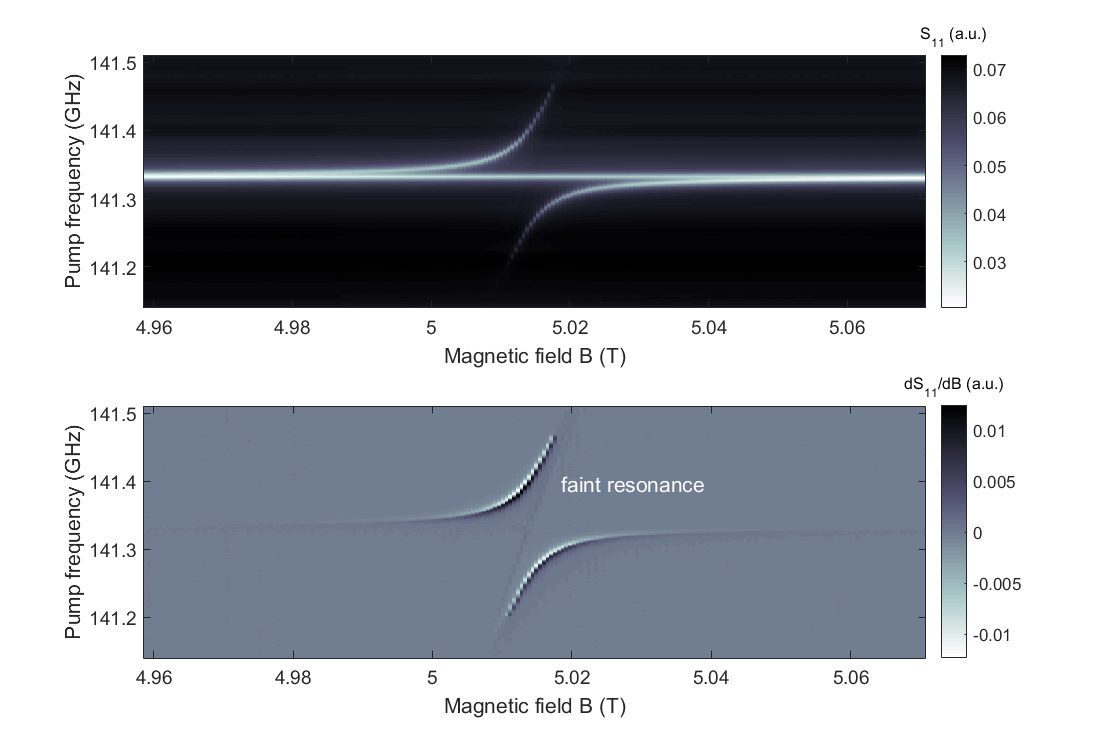 Figure 2. (top) Power reflection from the Fabri-Perot versus magnetic field B and pump frequency showing avoided crossing in the cavity spectrum for "active" mode and no frequancy change for "passive" mode. (bottom) The derivative of the above graph with respect to B reveals an additional "faint" resonance.

3.3 Transport of electrons through a microchannel T-junction (J.-Y. Lin, in collboration with David Rees from National Chiao Tung University and Alex Badrutdinov, Engineering and Microfabrication Support Section in OIST)

Electrical transport of 2D electrons on liquid helium has been of great interests for a long time. It is well enstablished that the electron motion parallel to the liquid surface is overdamped due to their coupling to ripplons and is well descrbed by the Drude model. However, deviations from the Dride regime can be expected due to strong electron-electron interaction, polaronic effects, etc.

To study the electrical DC transport of electrons, we have fabricated a unique device which consisted of three reservoirs for storage of electrons connected by a T-shaped microchannel through which electrons can flow, see Fig. 3 (top). By driving electrons from one reservoire (R1) into two remaining reservoirs (R2 and R3), we could study how the current of electrons splits at the T-junction. We have found that, unlike what is expected for the Drude transport regime, electrons can show a very strong assymetric flow, see Fig. 3 (bottom) indicating that electrons prefere to flow straight rather than turn at the junction. We speculate that this unusual behavior is associated with large inertia of electrons due to polaronic effects when electrons got self-trapped into ripplonic dimples formed by them on the liquid surface. More invetsigation is required to understand a perculiar temperature dependence, see FIg. 3 (bottom). 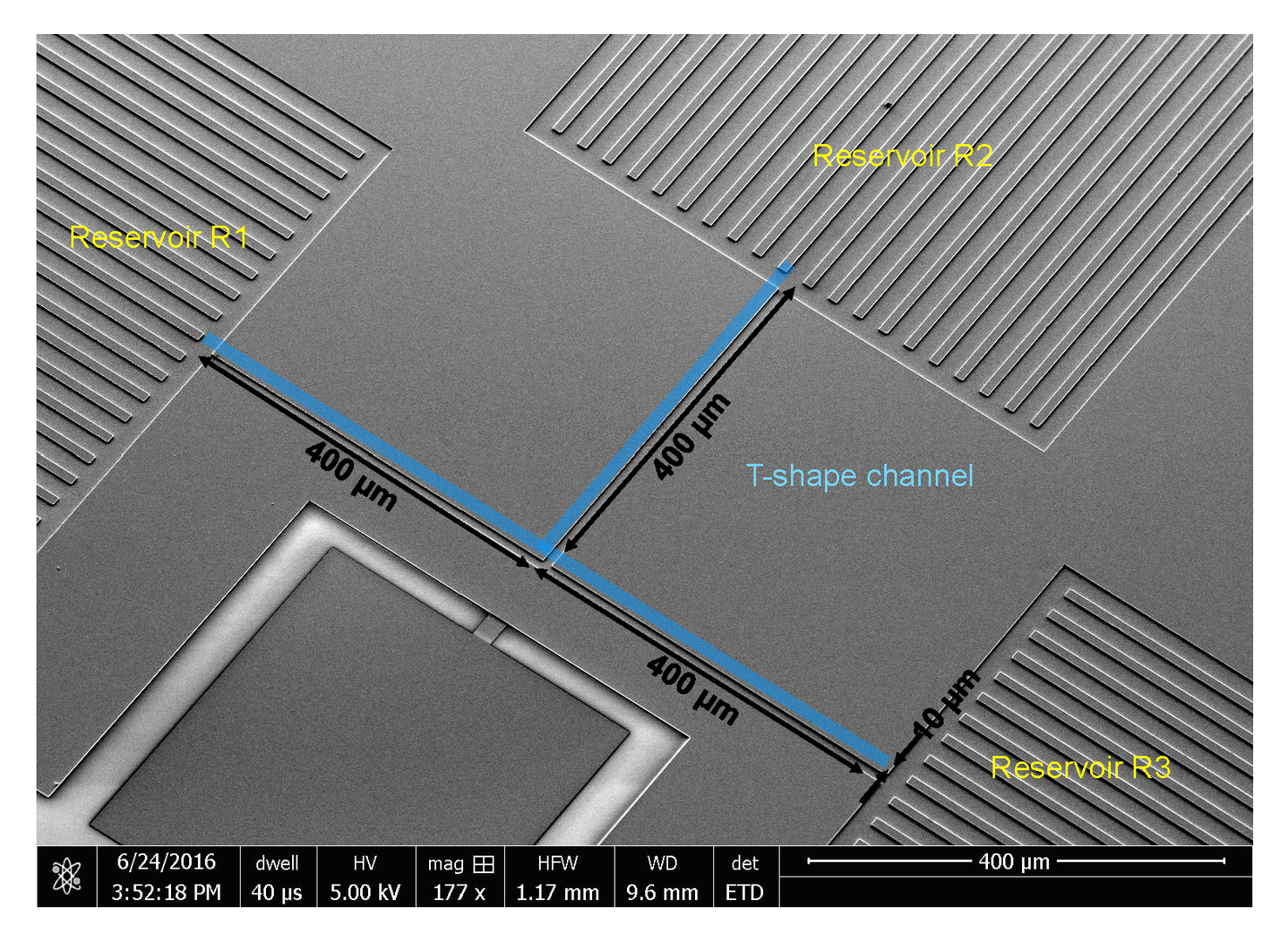 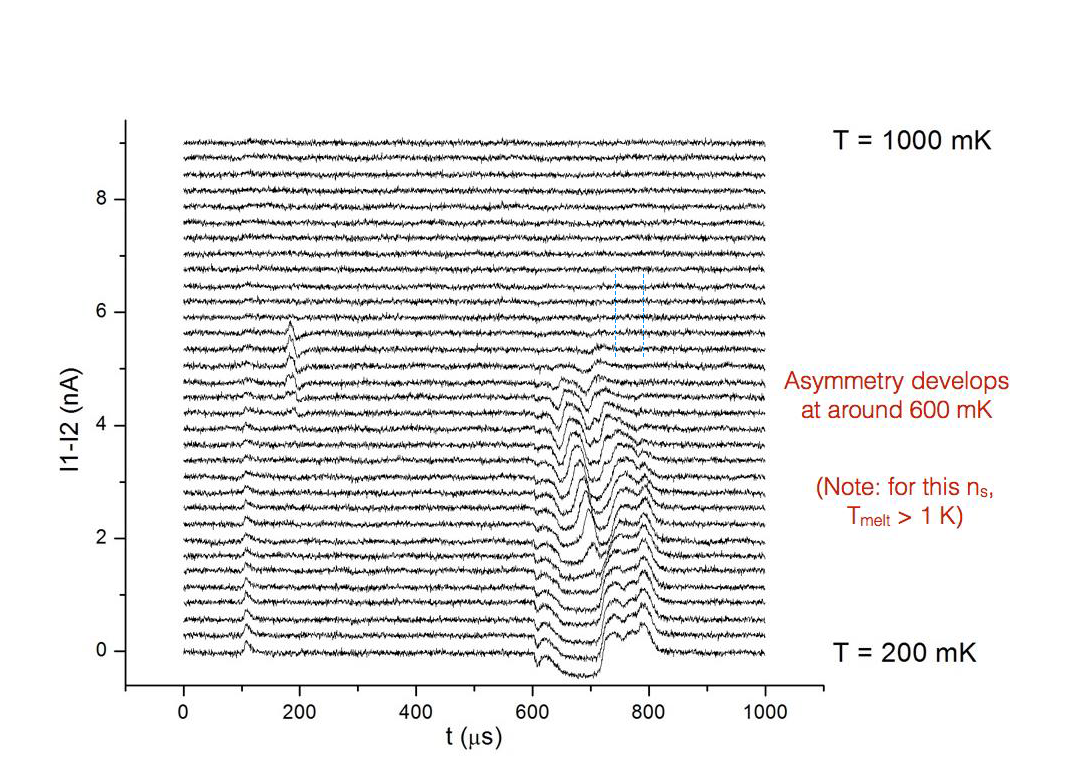 Figure 3. (top)  Micrograph of the fabricated device consisting of three reservoirs for storage of electrons connected by a 10 micron wide and 1 microne deep T-shaped channel filled with liquid helium (indicated by blue).  (bottom) The difference bewteen two currents of electrons split at the T-shaped juction shows strong assymetry at temperatres T<0.6 K, indicating that electrons do not follow symertric lines of force as expecetd for the Drude (overdamped) transport of electrons. Different lines are for diffferent temperatures indicated on the right.

3.4 Theoretical and experimental study of nonlinear NMR signals in MnCO3 antiferromagnet with strong hyperfine interaction (in collaboration with Yu. Bunkov from Institute Neel, CNRS, M. Kurkin from Institute for Physics of Metals, Russian Academy of Science, and A. Tankevich, Ural Federal University) (link)

We developed a theory and carried out experiments to investigate the shape of nonlinear NMR signals in a MnCO3 antiferromagnetic sample. It is known that the nonlinear NMR in this system arises because of a shift of the NMR frequency (“frequency pooling”) with increasing microwave excitation due to the strong hyperfine interaction of nuclear spins with ordered electron spin system. Traditionally, the observed effect is attributed to the heating of the nuclear spin system by the resonant excitation. We have carried out low-temperature measurements of both the in-phase (absorption) and quadrature (dispersion) components of the NMR signal at the increasing power of excitation, see Fig. 4 (top) and (middle). In order to explain the strongly nonlinear behavior of the observed signals we developed a theory which accounts for the indirect nuclear spin relaxation by their coupling to electron spins. We solved the linearized Landau-Lifshitz-Gilbert equations for coupled electron-nuclear spin system and compared the results of calculations (black dashed lines) with the experiment, see Fig. 4. Our model predicts deflection angles of the nuclear magnetization vector as large as 60 degrees for the highest microwave power used in the experiment. This is drastically different from the predictions of usual “heating” (Bloch) model which predicts small deflection angles but strong decrease of the magnitude of magnetization vector, see Fig. 4 (bottom). We argue that the large angle of deflection of nuclear magnetization vector, which preserves vector magnetude, can be associated with the coherent rotation of nuclear spins, thus the Bose-Einstein Condensation (BEC) of nuclear spin waves. 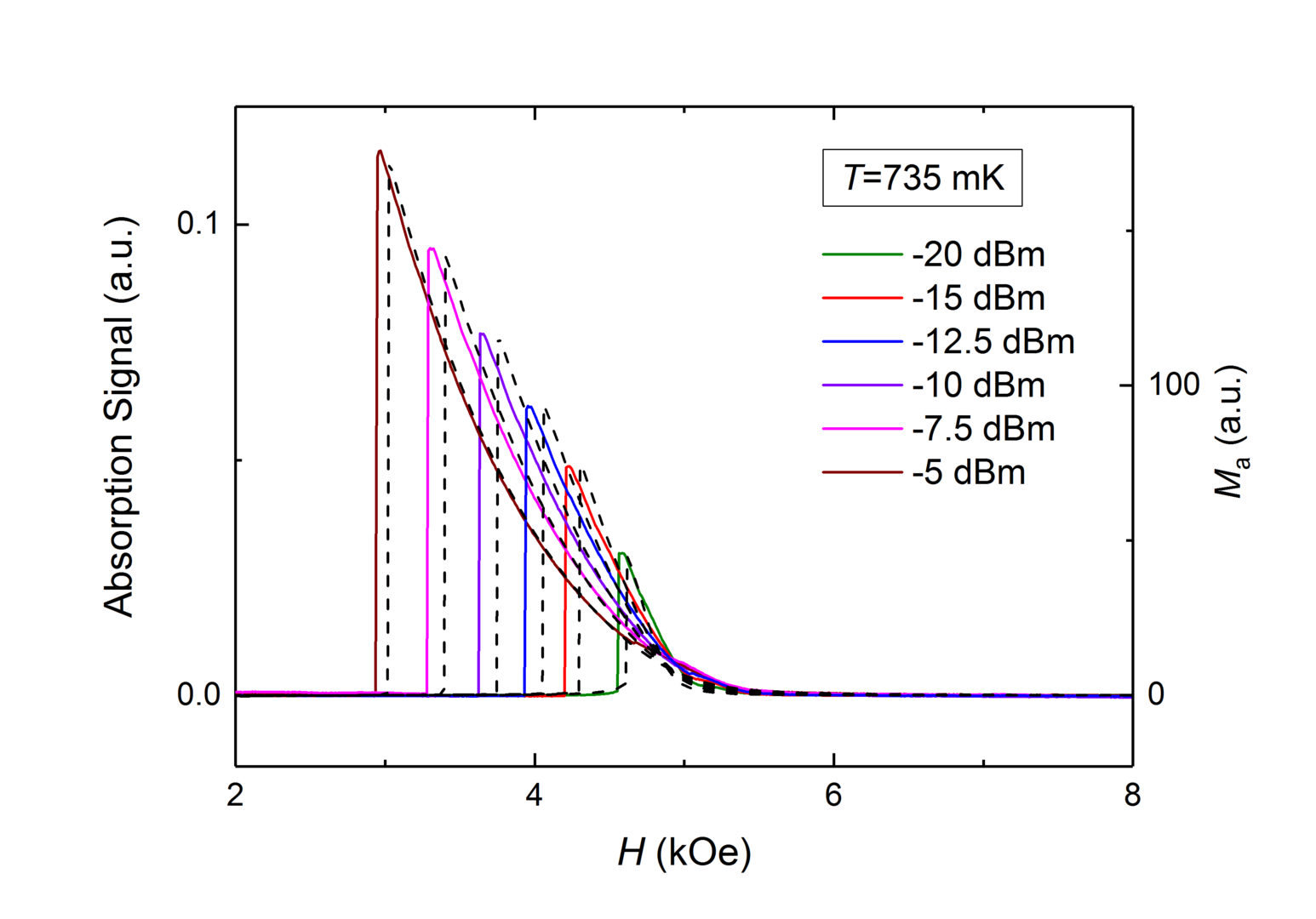 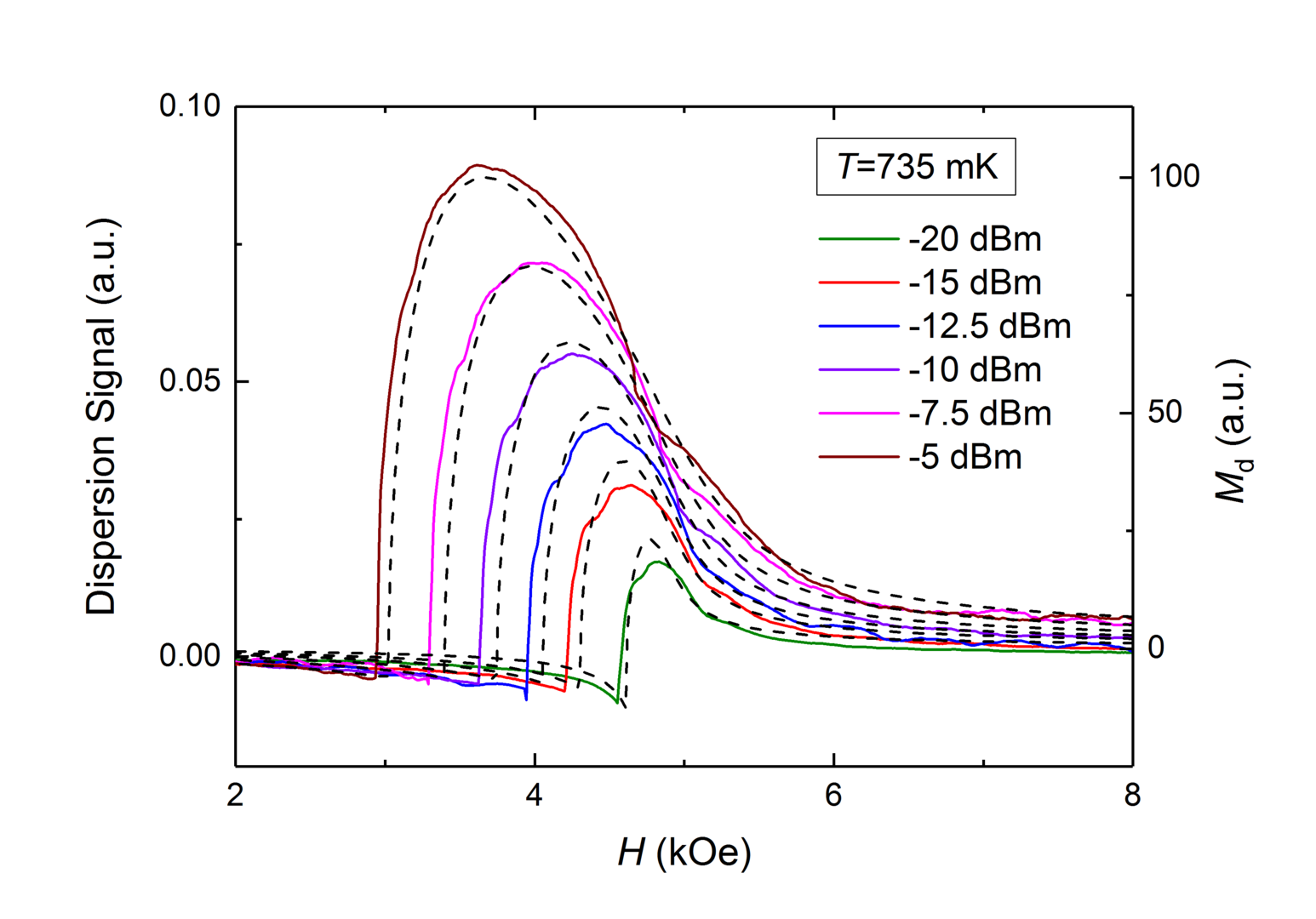 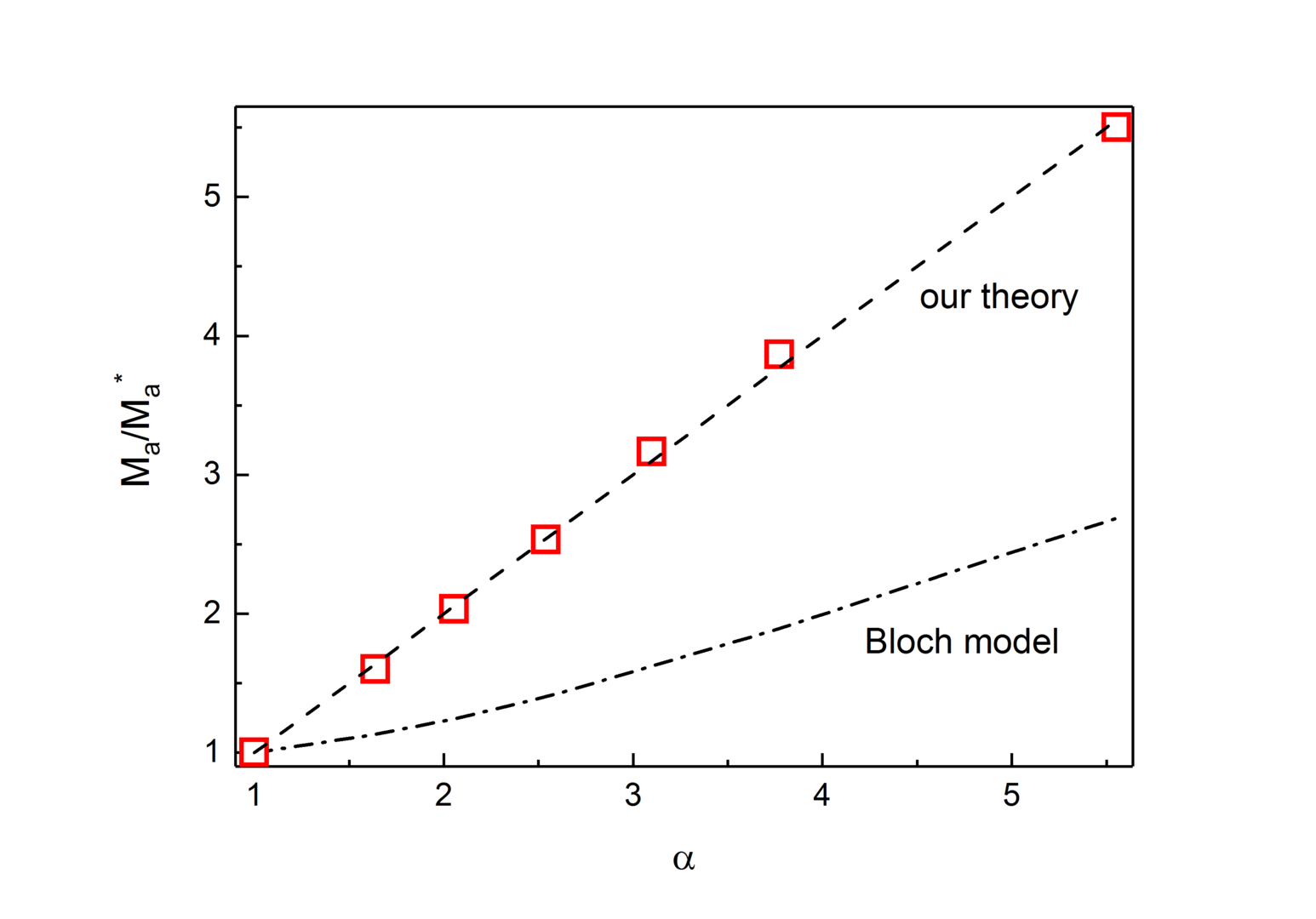 OIST-JST Presto Joint Symposium on Frontiers in Optics and Photonics