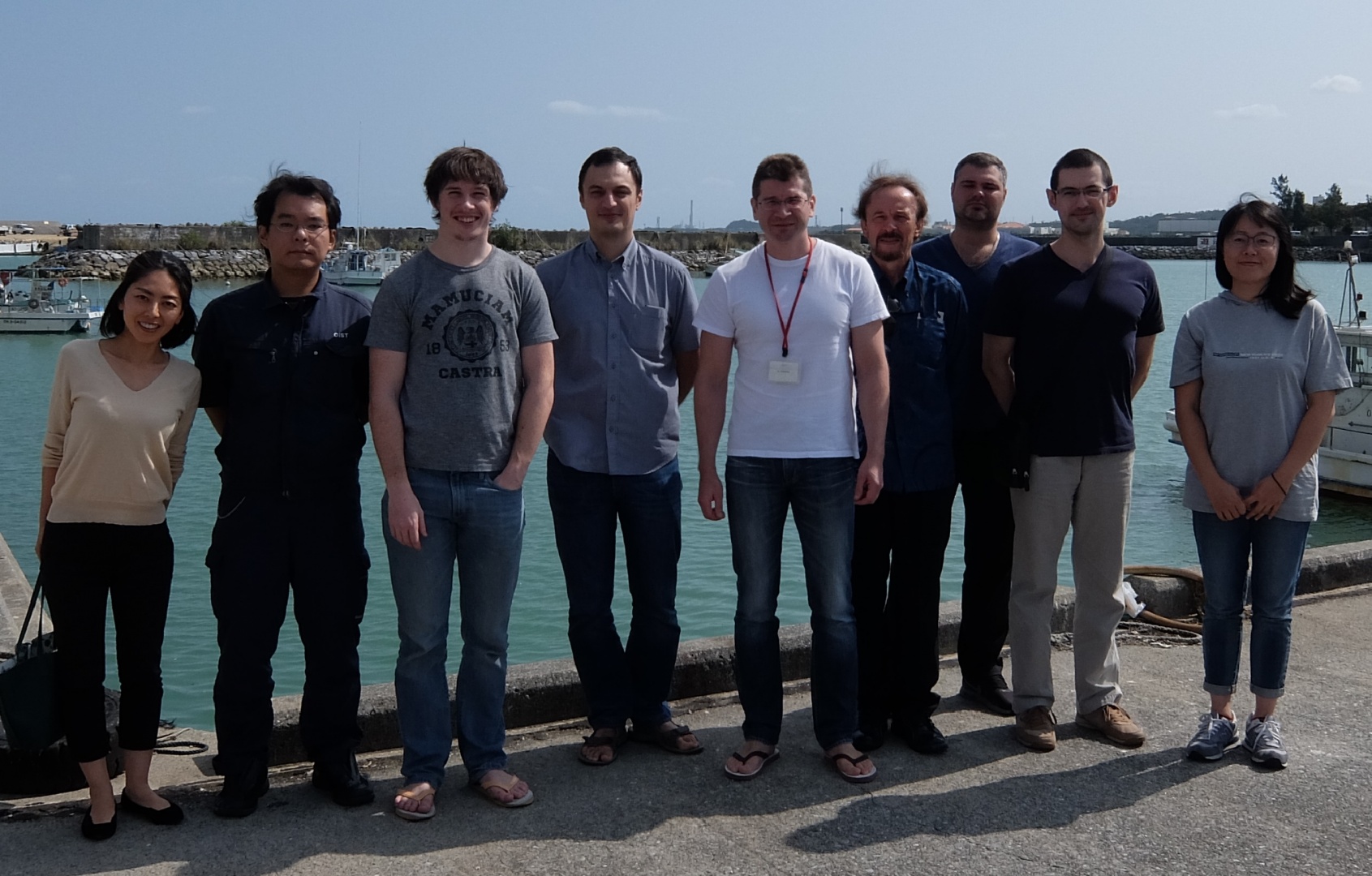 The system of electrons on helium provides an excellent platform for studying quantum transport in 2D electron systems. This remains one of the main research subjects in our Unit. In FY2014 we continued experiments to study microwave-induced phenomena and their effect on electron magneto-transport in this system. For the first time in this system, we observed the photo-conductivity response at the cyclotron-resonance harmonics. In collaboration with other researches from France and Japan, we also studied a fascinating microwave-induced incompressible state formed in this system. In addition to this studies, we continued experimental investigation of electrons on helium confined in microscopic channels to study intriguing many-body phenomena.

In addition to experiments with electrons on helium, we continued our work with crystalline antiferromagnetic materials with strong interaction between electron and nuclear magnetic moments, and observed, for the first time, the regime of strong coupling of a microwave cavity mode to nuclear spin ensemble. This can provide a promising new approach for designing the quantum memory for quantum information processing.

Two-dimensional electrons in a perpendicular magnetic field populate equidistant Landau levels, and, under certain conditions, the transitions between the Landau levels can be resonantly excited by using the microwave radiation. Quantum-mechanical selection rules allow direct photo-induced transitions only between adjacent Landau levels when the frequency of microwaves is equal to the transition frequency, the so called cyclotron resonance. However, in presence of disorder the mixing of different quantum states can lead to microwave-induced transitions between different Landau levels and quite fascinating photo-response in electron transport at cyclotron-resonance harmonics. In high-mobility 2D electron system in GaAs/AlGaAs heterostructures, this can lead, for example, to so called MIRO (Microwave-Induced Resistance Oscillations) and Zero-Resistance States. The existence of a similar response in ultra-clean model system of electrons on helium was a long-standing question. In our new experiments, we employed a high-Q Fabry-Perot resonator to focus the resonant microwave field onto the 2D electron system formed on the surface of superfluid helium-4, see Figure 1 (left panel), and measured the longitudinal conductivity of electrons in perpendicular magnetic fields. These measurements revealed photo-conductivity response at the cyclotron resonance harmonics corresponding to integer ratios of the microwave frequency to cyclotron frequency, see Figure 1 (right panel). This result proves the universality of the effect of MIRO, and potentially could help to identify the origin of MIRO and Zero-Resistance States observed in 2D electron systems.

3.2 First observation of microwave-induced incompressible state of electrons on helium (in collaboration with Dr. Chepelianskii from Universite Paris-Sud and Prof. Kono, Dr. Watanabe, and Dr. Nasedkin from RIKEN) (link)

Two-dimensional electrons in a magnetic field can form new states of matter characterized by topological properties and strong electron interaction as displayed in the integer and fractional quantum Hall states found in 2D electrons in Si MOSFETs and GaAs/AlGaAs heterostructures. In these states, the electron liquid displays several characteristics, such as vanishing longitudinal conductivity and compressibility. Previous experiments done with the ultra-clean model system of 2D electrons on liquid helium reported excistence of  the microwave-induced states characterized by vanishing longitudinal conductivity (link). In the new experiment, compressibility of the electron liquid in the regime of vanishing conductivity was addressed. In this experiment, the electrons were subjected to perpendicular magnetic field and exposed to microwaves that excited electrons from the ground subband to first excited subband, see Figure 2 (left panel). The compressibility of electrons, that is a response of electron density to the applied AC confining potential, was measured by detecting the AC current induced by electrons in a central electrode. When exposed to microwave radiation, the electron response showed a remarkable drop of compressibility to zero comparing with non-zero compressibility without microwaves, see Figure 2 (right panel) (red and blue lines, respectively). This result demonstrates a remarkable example of microwave-induced self-organization phenomenon in a 2D electron system and requires further study.

Figure 2: (Left) Sketch of  the experimental cell used in the described experiment. (Right) Compressibility of 2D elecrons in perpendicular magnetic field without (blue line) and with (red line) microwave radiation. Region I corresponds to microwave-induced incompressible state of the electron system.

It is well known that electrons on helium can form a two-dimensional electron crystal, the so called Wigner Solid, at sufficiently low temperatures. When the Wigner Solid is moving along the helium surface, two transport regimes are possible. In the first regime the crystal strongly interacts with the surface and emits resonant surface waves, which limits the crystal velocity. In the second regime the crystal is decoupled from the surface and is moving much faster. While these transport properties have been already understood quite well, it is important to know how they might change upon confinement of electrons in artificial mesoscopic structures. Such confined geometries are of great recent interest in terms of control and manipulation of electrons for quantum engineering and quantum information applications.

In our experiments, we studied nonlinear transport of electrons confined in a 10- mm wide channel, see Figure 3. In the investigated geometry, the electron density in the channel can be locally altered using an integrated gate electrode. Thus, we could analyze the transport of two electron crystals of different densities connected in series, one of which was about 10x20 mm in size and had only several hundred electrons in it. Our results indicate that for the smaller crystal the characteristic transport properties hold, and under certain conditions define the transport properties of the whole system.

These preliminary experiments pave the road towards further confining of the electron system at the center of the channel by employing a microscopic electrode, with the aim to trap and detect a single electron.

Figure 3: (a) Image of the fabricated microstructure used to study the effect of confinement on the nonlinear transport of electron crystal. (b) Schematic diagram of the device. (c) A typical I-V curve displaying different transport regimes of the electron crystal in microchannel.

3.4 First observation of the strong coupling between a microwave resonator and nuclear spin ensembles in antiferromagnetic materials with strong hyperfine interaction (Dr. Abdurakhimov, in collaboration with Prof. Bunkov from Institute Neel, CNRS) (link)

In recent years, there is a general interest in studies of strong coupling between light (photons) and spin systems which allows quantum mechanical transfer of a photon state to a spin excitation and backward. The spin-photon coupled systems are proposed to be used as a quantum memory in a quantum computer – a cherished quantum device that would perform important calculations much faster than conventional computers. Previously, it was shown that electron spins could be strongly coupled to microwave light (photons) in a resonator. However, to the best of our knowledge, nobody has observed strong coupling between nuclear spins and microwave photons. On the other hand, quantum states of nuclear spins should have very long coherence time, which should be advantageous in terms of quantum memory applications. In our experiment, we studied a sample of MnCO3, an antiferromagnetic material that possesses a weak ferromagnetism and strong interaction between ordered electron magnetic moments and paramagntic system of nuclear spins. By employing a split-ring resonator operating at ~600 MHz, we observed, for the first time, the regime of strong coupling between the resonant electro-magnetic mode of the resonator and nuclear spin ensemble in MnCO3. The strong coupling is mediated by the hyperfine interaction between electron and nuclear spins, see Figure 4 (left panel), and manifests itself in the avoided crossing and splitting of the cavity mode, see Figure 4 (right panel). Currently we investigate properties of this material relevant for potential applications as a quantum memory device.

Figure 4. (Left): Artistic view of interaction between microwave photons and the system of nuclear and electron spins which, in turn, are coupled via the hyperfine interaction. (Right): Strong coupling between a hybridized nuclear magnon and a microwave mode of the resonator. The color plot represents the interaction between the microwave photons at different frequencies and the nuclei in a manganese carbonate crystal. The blue indicates there is no motion at that particular frequency, meaning the microwave has not coupled with the nuclear spins. The two dark red arcs are the strongest motion, indicating the frequencies at which the microwaves and nuclei are most strongly coupled.

Liquid helium, the only natural quantum liquid known in our planet, provides a fascinating object to study quantum phenomena at macroscopic scale. Liquid 4He is characterized by the dielectric constant close to unity, and it becomes superfluid at temperatures below about 2.2 K. While the phenomenon of superfluidity has being known since 1930th, and the phenomenological theory has being developed and successfully explained all thermodynamic properties of superfluid helium-4, some questions remain opened. In particular, an interesting question is if there exists a correlation between mechanical motion of normal and superfluid components and electrical properties of the superfluid. Unfortunately up to now the electrical properties of liquid helium has not been sufficiently studied. In particular, ac absorption measurements in liquid helium are seriosly hindered by its extremely low dielectric losses.

In order to study electrical properties of superfluid helium and test feasibility of ac measurements, we employed the so called Whispering Gallery Mode (WMG) resonator, a quartz disk that supports high-frequency electro-magnetic modes propagating along its curved surface, see Figure 5 (left panel). The range of operation frequencies of the resonator (~180 GHz) was chosen to match the energy of the roton gap at T~1K. A very high (Q~200,000) quality factor of such a resonator allowed us to observe the frequency shift of a resonance mode due to changes in the liquid  surrounding the resonator, which in turn allowed us to calculate the change in the dielectric constant of liquid helium. The temperature dependence and measured values of the dielectric constant in normal and superfluid phases of liquid helium were found to be in good agreement with theoretically predicted dependence, see Figure 5 (right panel). This result shows that WGM resonator can provides an excellent tool to study ac electrical properties of superfluid helium. Our next task is to measure the ac absorption in superfluid helium near frequencies corresponding to the roton energy gap.

Figure 4. (Left): Schematic view of the experimental cell. The dielectric disk (WGM resonator) is suspended in liquid helium, and its resonant Whispering Gallery modes are excited and detected by a pair of dielectric antennas. The insert shows calculated distribution of microwave electric field inside the dielectric material (Right): Dielectric constant of liquid helium measured in a temperature range that covers both normal (above 2.2 K) and superfluid (below 2.2 K) phases. The experimental data (symbols) are compared with theory (blue solid line).

International workshop DiRT2D: Disorder and its Role in Transport in 2D systems

8. The Category or Type of Funding, like External Funding, Awards, etc.