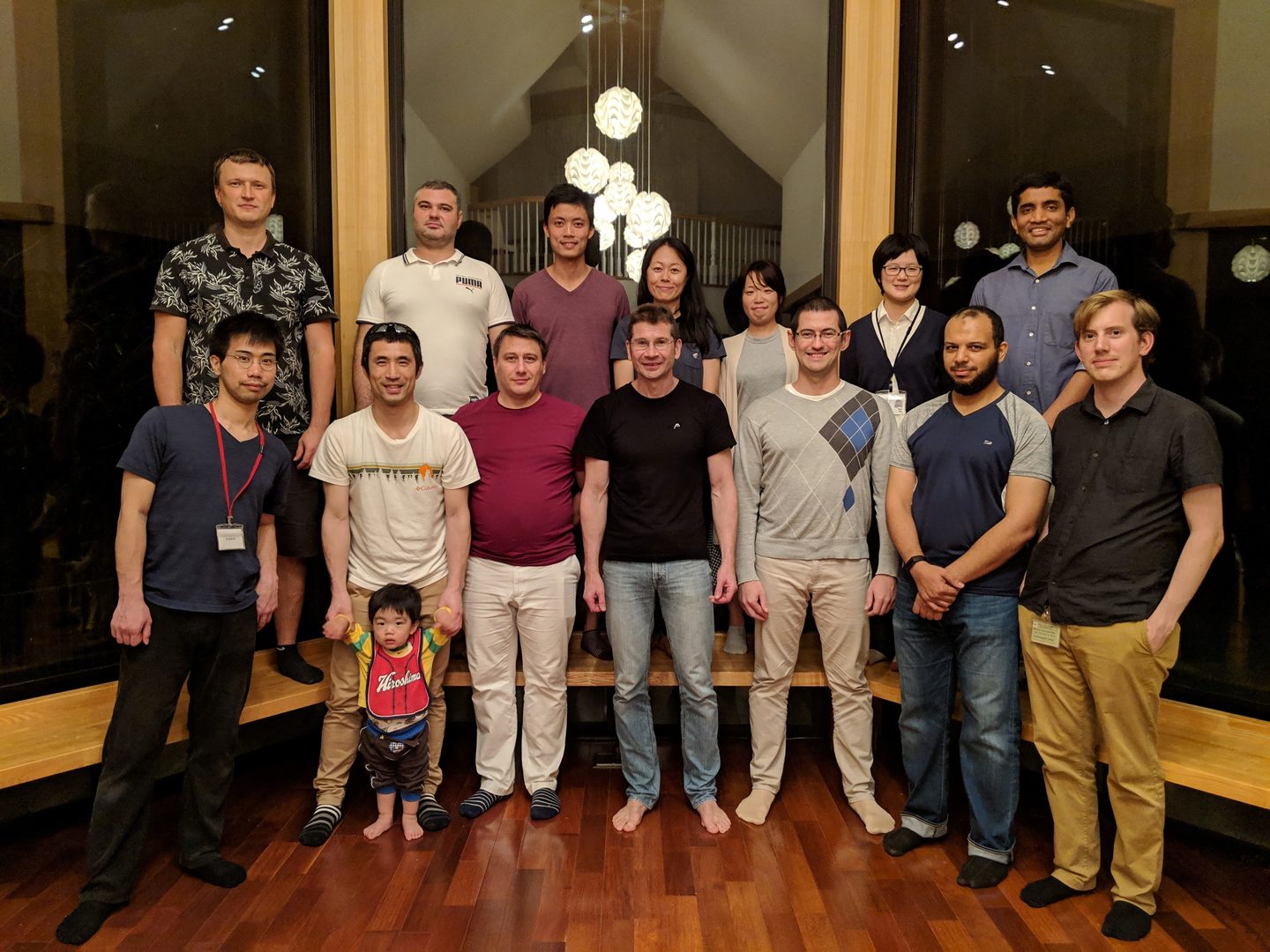 In FY2017, the Quantum Dynamics Unit continued its experimental work on various quantum systems, including electrons on helium, coupled electron and nuclear spin systems in antiferromagnets, and impurity spins in diamond to explore new interesting quantum phenomena and look for their potential applications for quantum information technologies.

2.1 Circular-Polarization-Dependent Study of MIRO in electrons on helium

2.2 Capacitive detection of Rydberg state exciations in electrons on helium

3.1 Circular-Polarization-Dependent Study of MIRO in electrons on helium (O. Zadorozhko, in colloboration with Yu. Monarkha from Institute for Low Temperature Physics and Engineering, Ukraine)(link)

In FY2014, we reported the first observation of the conductivity photo-response in electrons on liquid helium at the harmonics of the cyclotron resonance (link). The orign of this effect is similar to that of the Microwave-Induced Resistance Oscillations (MIRO) of 2DEG in semiconductors. An outstanding problem with the explanation of MIRO is their experimentally observed immunity to the direction of circular polarization. Since electrons on helium present an extremely clean and simple system, the study of MIRO in this system can provide important insight into this problem.

We had carreid our experiemntal study of circular-polarization-dependence of MIRO in electrons on helium and observed a strong dependence of MIRO amplitide on the microwave helicity, see Fig. 1.This is in sharp contrast with the similar studies in semiconductors, but is in good agrement with our theory of MIRO.

Figure 1: Photo-conductivity response of 2D electrons on liquid helium versus applied magnetic field B and microwave frequency f . The white trace is a slice at f=35.215 GHz showing MIRO which amplitide depends on the orientaion of B-field, therefore polarization of the microwaves.

Previously, we reported observation of the strong coupling between the cyclotron motion of an ensemble of 2D electrons and a single-mode microwave cavity resonator (link). One of the unexpected results was observation of an additoinal weak resonance corresponding to the "passive" cavity mode (see FY2016 Annual Report).

In our new study, we carried out an experiment using a high-quality factor 35 GHz Fabry-Perot resonator. In a new setup, we clearly obsereved existance of the additinal resonace, see Fig. 2. To elucidate its origine, we carried out a detailed theoretical analysis of our experiement using both classical and full quatum treatments. We showed that both treatments of this lienar system give identical results. Moreover, we  elucidate origin of the additional resonace as arising from the conversion of the "passive" mode to the mode with opposite circular polarization due to boudary condiations at the conducting walls of the experimental cell. Our  numerical simulations turned out to be in comlete agrement with our experimental results, see Fig. 3.

Figure 2: Power reflection from te cavity (top) and photo-conductivity response of electrons (bottom) versus the cyctron frequency and frequency of microwave pump. Additional resonace is clearly observed at the "passive" mode. 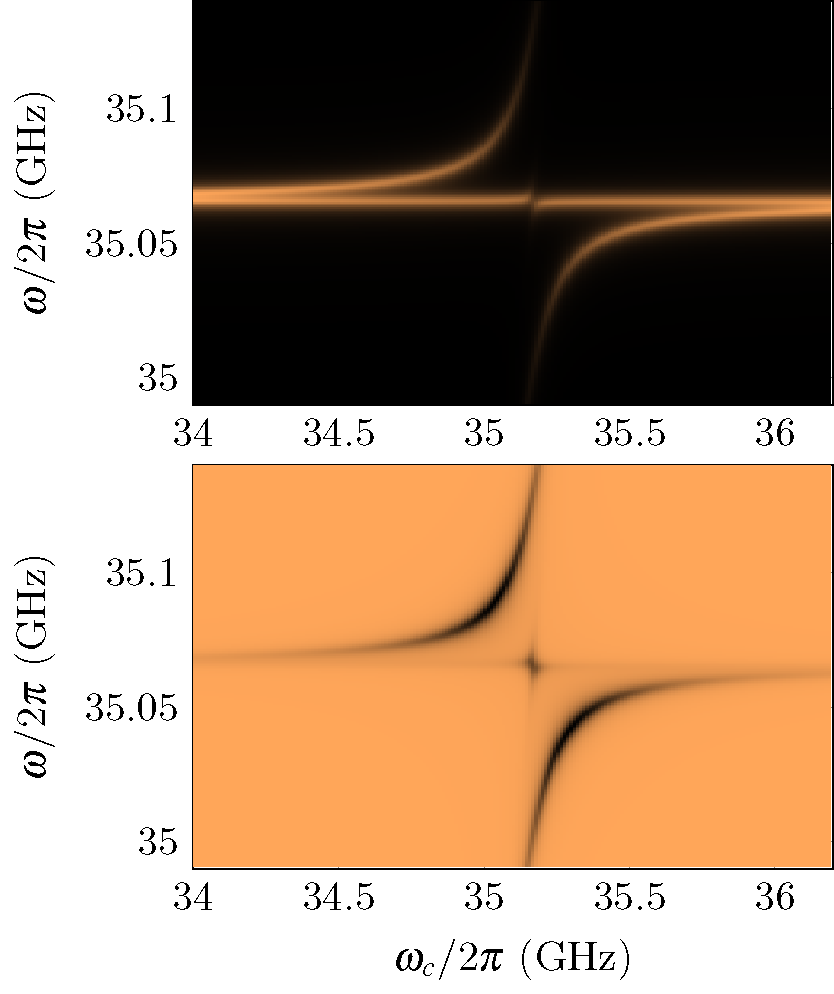 Figure 3: Numerical simulations of the experiment which completely reproduce our experiemntal results shown in Fig. 2.

3.3 Effect of finit size of an elecron crystal on its sliding from polaronic deformations on the surface of liquid helium  (J.-Y. Lin, in collaboration with Alex Badrutdinov from Research Support Team, OIST) (link)

At sufficiently low temperatures and high electron densities 2D electrons on helium crystalize into the Wigner Solid (WS) phase. The electrical transport of WS shows some facinating features such as self-trapping into polaronic deformations of the liquid surface (the Bragg-Cherenkov scattering), as well as sliding from these deformations at sufficiantly large driving electric fields.

We proposed that, for sufficiently small WS, the sliding threashold should strongly depend on size of the electron crystal due to radiative loss of ripplons through the crystal boundary. To test this idea, we fabricated a device which allowed us to study the effect of the crystal size on the slding threshold, see Fig. 4 (top). Using this device we confirmed that the thershold strongly decreases when the size of WS becomes less than  ~20 microns, the damping length of the ripplons due to their interaction with phonons in the liquid, which is in good agreement with our theoratical model, see Fig. 4 (bottom). 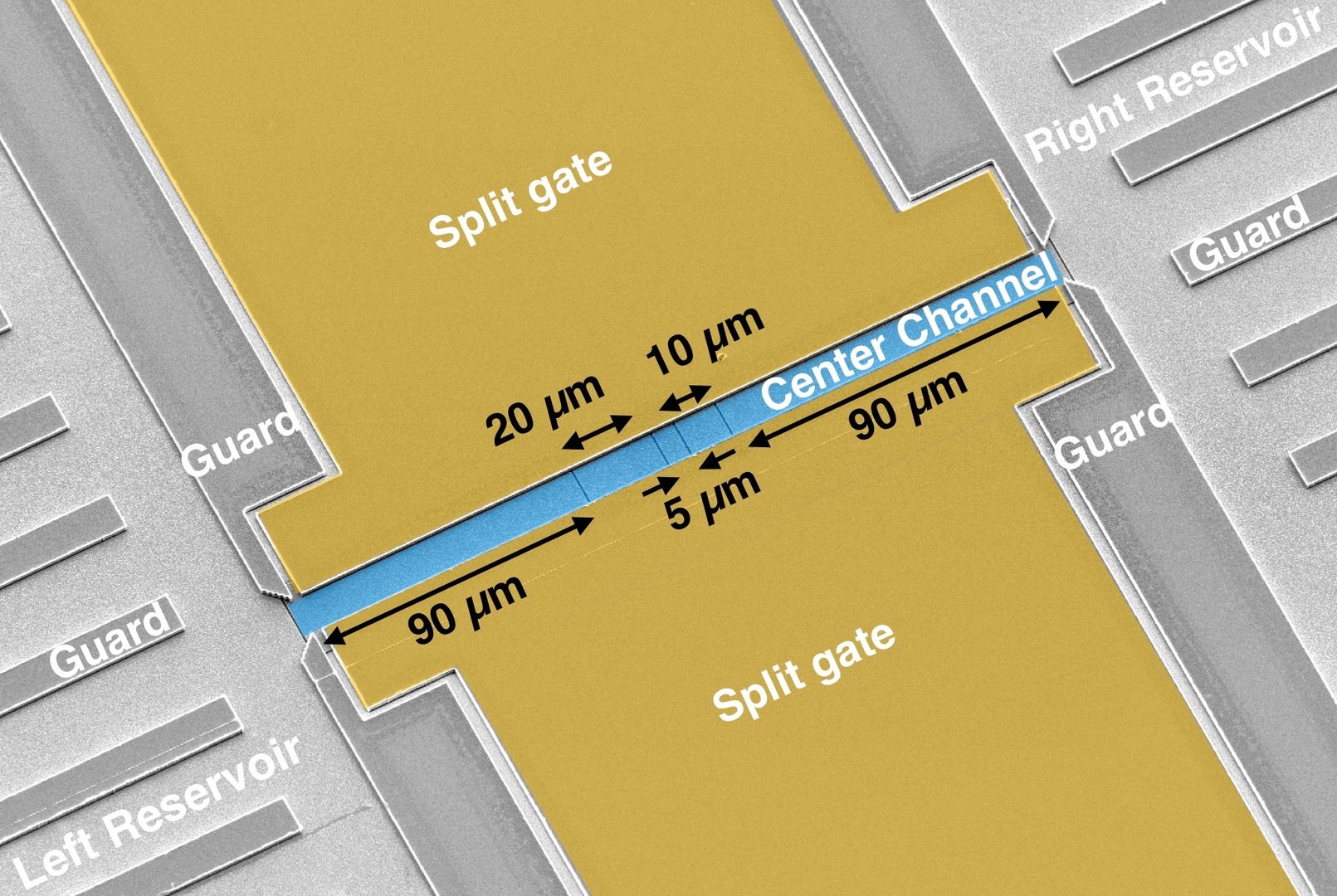 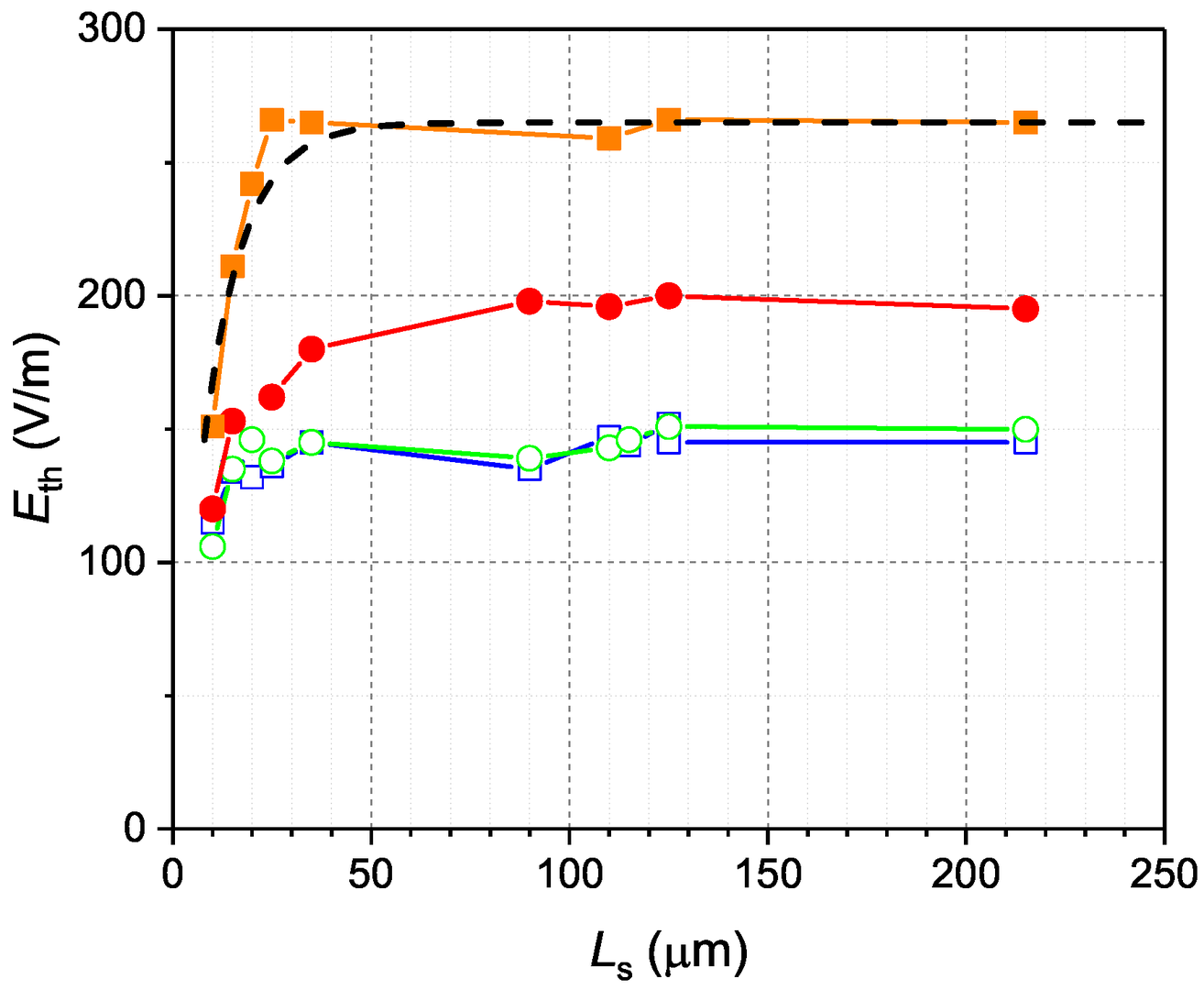 Figure 4: (top) Micrograph of our fabricated sample consisting of two reservoirs for electron storage connected by a 10 micron-wide and 1 micron-deep central channel. The bottom of the channel consists of a set of electrodes of virable size, which determine the size of the electron crystal in the channel. (bottom) Experimental values of the driving electric field at the sliding threshold versus the size of the crystal. Dashed line is the predication of our theoretical model.

3.4 Capacitive detection of the Rydberg state exciation in electrons on liquid helium (E. Kawakami, in collaboration with O. Rybalko from Institute for Low Temperature Physics and Engineering, Ukraine)

We proposed and experimentally demonstrated a new method for detection of excitation of the Rydberg states of electrons on liquid helium. In our experiment, 2D electron system is placed between two plates of a parallel-plate capacitor, see Fig. 5 (on the left). As electrons are excited from the ground state (n=1) to the first excited state (n=2) of orbital motion perpendicular to the surface, the image charge induced by each electron at the top (bottom) plate is changed by q (-q), which is a small fraction of the elementary charge e. The corresponding image current from many electrons (~1,000,000) induced at each plate is detected, see Fig. 5 (on the right), and shows a characteristic 1-2 transtion resonance. 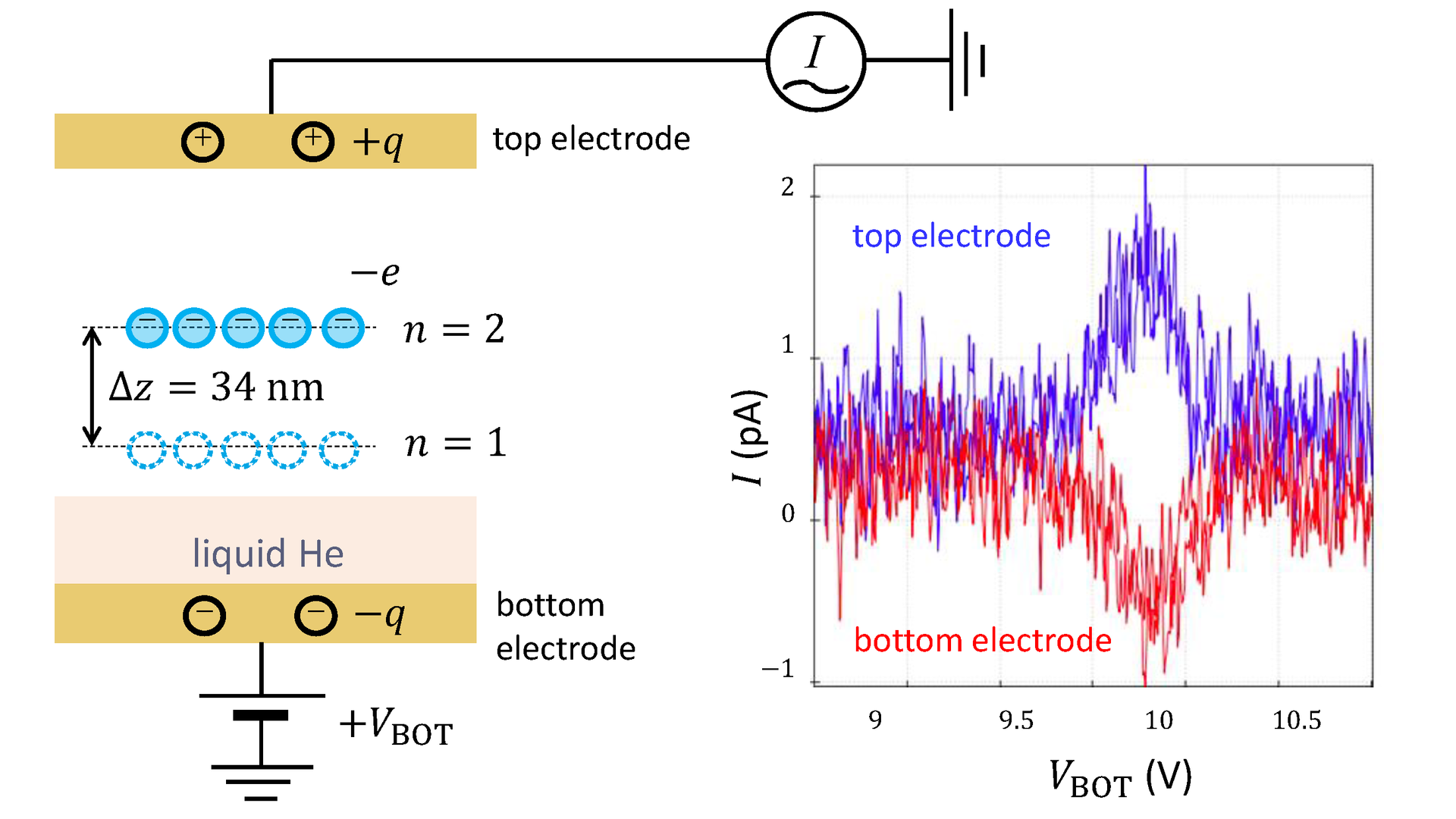 Figure 5: (left) Schematic diagram of the capacitive detection of the first excited Rydberg state population. Excited electrons are elevate about 35 nm above the liquid helium surafce and change the amount of the image charge induced at the top and bottom plates of the capacitor. (right) Image current at the capacitor plates detected during excitation of electrons with applied microwaves.

In our future experiments, we aim to increase sensitivity of our detection method by employing sensitive cryogenic amplifies.

3.5 Coupling of spin ensembles in diamonds to a 3D loop-gap resonator

We designed a loop-gap microwave resonator for applications of spin-based hybrid quantum systems and tested it with impurity spins in diamond. Strong coupling with ensembles of nitrogenvacancy (NV) centers and substitutional nitrogen (P1) centers was observed, as seen in Fig. 6 below. 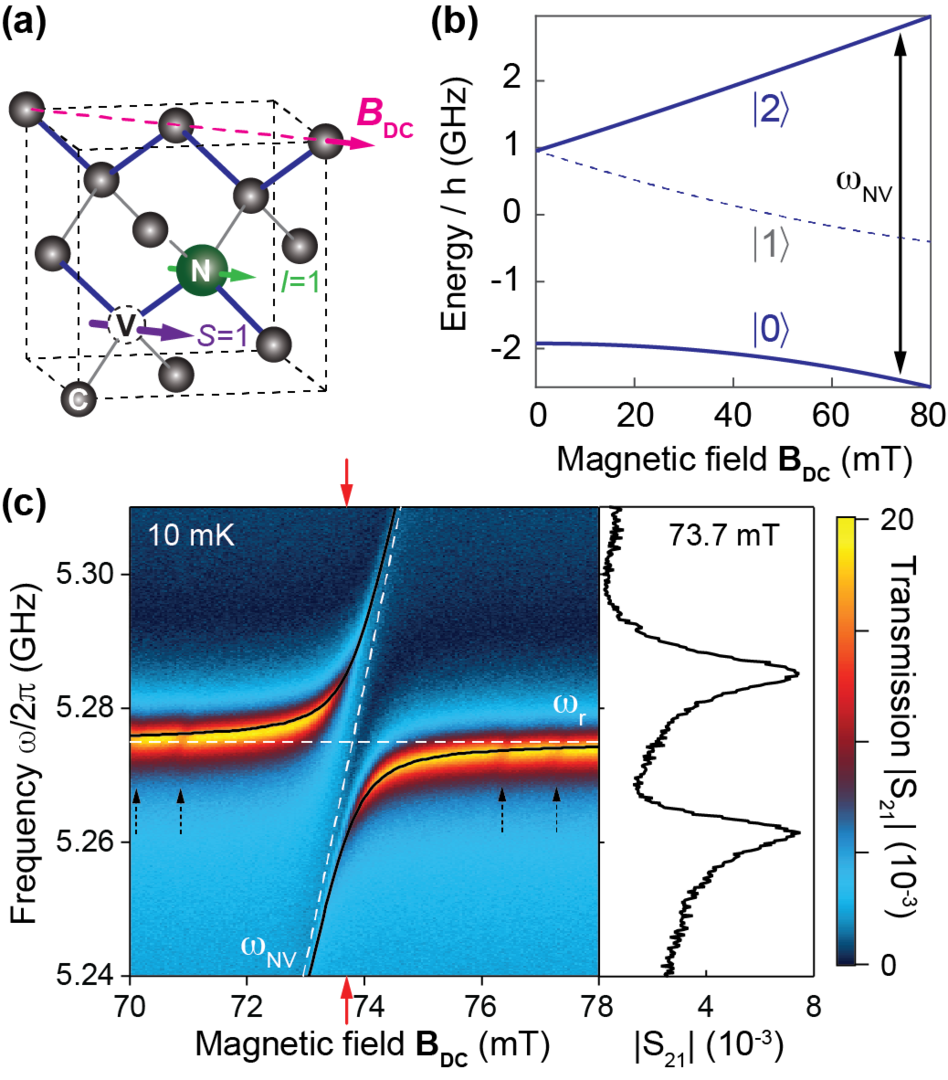 Figure 6: Schematic of an NV center in a diamond crystal with the orientation of the external constant magnetic field BDC || 110. In this configuration, there are two possible orientations of NV center with respect to BDC: orthogonal ones (bonds drawn in gray) and non-orthogonal ones (thick blue). (b) Energy levels of the non-orthogonal NV centers. The transition investigated in this work is between the lowest |0> and the highest |2> states, which are drawn in solid blue curves. (c) Transmission spectra color plot of the diamond sample (left) and the spectrum at 73.7 mT (right). The white dashed lines are the original eigenfrequencies of the NV centers and the loop-gap resonator. The dotted arrows on the left panel highlight the other spin transitions due to the hyperfine coupling to 13C nuclei.

These results show that loop-gap resonators are viable in the prospect of spin-based hybrid quantum systems, especially for an ensemble quantum memory or a quantum transducer. We next plan to incorporate an optical setup into our dilution refrigerator to demonstrate coherent microwave-to-optical frequency conversion.

JST-PRESTO: “Towards realization of a universal quantum computer using electrons on the surface of helium” (ヘリウム表面上の電子を用いた万能デジタル量子コンピューターの実現へ向けて)