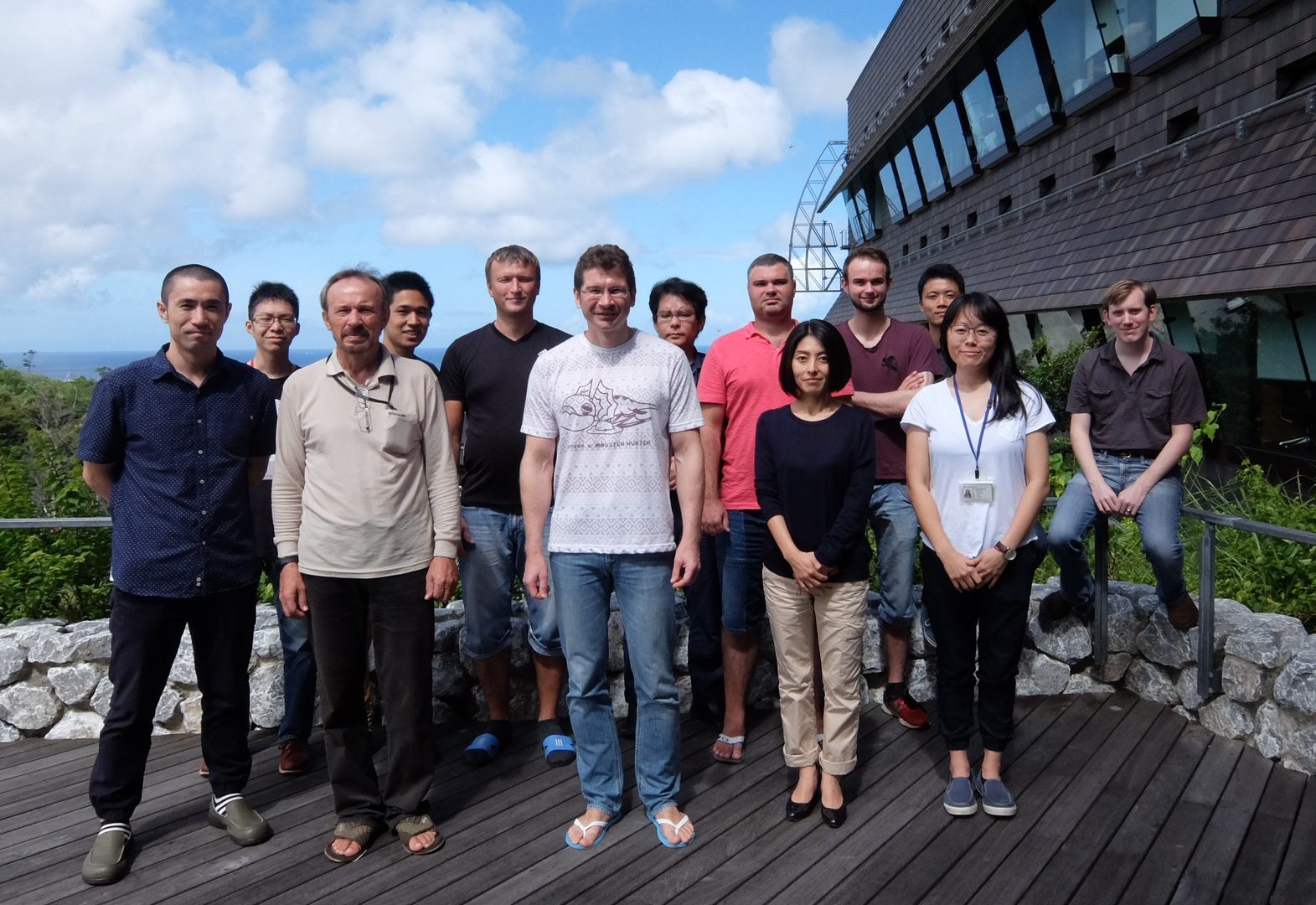 In FY2015, we continued our studies of microwave-induced dynamics in a 2D electron system on the surface of liquid helium. Using a high-quality-factor 100 GHz cavity resonator developed in our unit, we observed for the first time the strong coupling regime of interaction between a cavity electro-magnetic mode and the orbital motion of 2D electrons. This experimental development has potential prospect for CQED-type experiments in this system. We continue developing this and other microwave detection techniques for the experiments. We initiated collaboration with University Paris-Sud to study microwave-excited electron transport and successfully launched the first experiment with electrons on helium in France. We also continue our experiments with electrons on helium confined in microchannes, as well as coupled electron-nuclear spin ensembles in crystalline solids. Finally, we launched a new experimental program to study electron spin ensembles of silicon-vacancy centers in diamond with the purpose to develop novel hybrid quantum devices for Quantum Information Processing.

In our experiments we reached, for the first time, the strong coupling regime of interaction between the cyclotron motion of 2D electrons on the surface of liquid helium and a resonant electro-magnetic mode of a Fabry-Perot cavity resonator. The hallmark signiture of the strong coupling regime observed in our experiment is the splitting of the cavity spectrum when the resonant frequency of the empty cavity matches the cycotron frequency of electrons, the so called avoided crossing (see Fig. 1(a)). The corresponding splitting of the cycloron motion spectrum was obsereved in the electron trasport measuremernts, see Fig. 2(b). Despite the fact that similar observations of the mode splitting in many-particle systems have been described as a quantum-mechanical effect, we show that the observed splitting can be explained completely by a model based on the classical electrodynamics. The results of our calcualtions are shown in Fig.1(c,d). 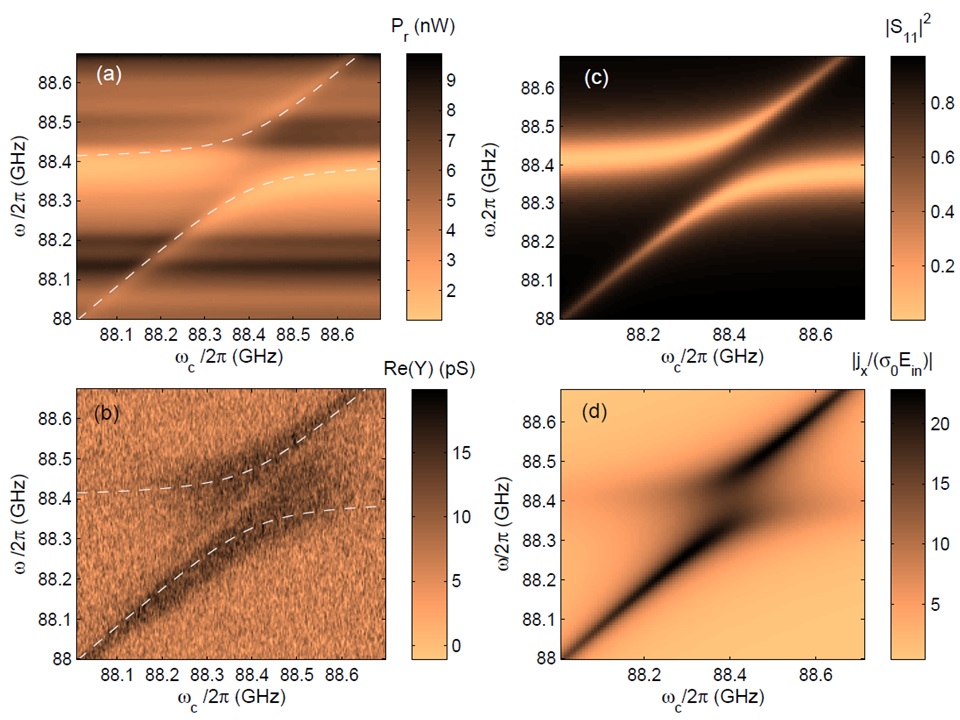 Figure 1: Comparison between experimentally observed (left side) and calculated (right side) signatures of the strong coupling regime of interaction between 2D electrons and a cavity electromagnetic-mode. The observed agreement implies that the avoided crossing of cavity and cyclotron motion spectra can be completely accounted by our classical model (link).

In the presence of perpendicular magnetic field the orbital motion of 2D electrons is quantized having an equidistant (Landau) energy spectrum. Usually this orbital motion is uncoupled from the quantized (Rydberg) states of perpendicular orbital motion. However, it is predicted that the presence of the magnetic field component parallel to 2D plane can induce coupling between Landau and Rydberg energy states. The experiment with the tilted field is now operational at LPS. We have used it to study the resistivity of the electron gas under microwave excitation at 140 GHz as function of the cyclotron frequency and the detuning between Landau levels of the ground and excited Rydberg state manifolds. Preliminary results indeed show signatures of such coupling, see Fig. 2. The interest to this system comes from the fact that, if neglecting Coulomb interactions, it is described by a Jaynes-Cummings Hamiltonian. Thus, these experiments can open possibility to simulate coupled quantum systems’ Hamiltonian with electrons on helium. 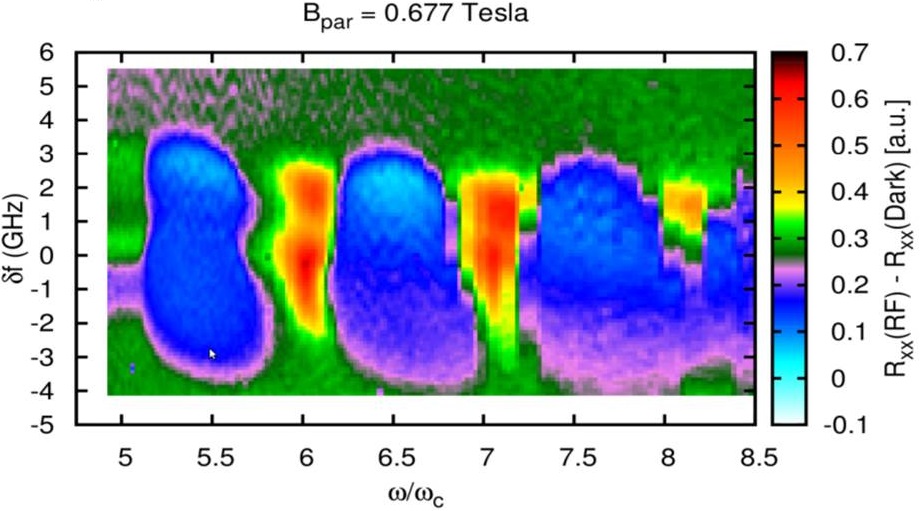 We have fabricated a high Q-factor Fabry-Perot (FB) resonator working at frequency ~35 GHz towards an experiment to study microwave-polarization dependence of the microwave-induced resistance oscillations (MIRO) in electrons on liquid helium. A high quality factor ~12,000 was achieved by optimizing several parameters such as coupling of the waveguide to the cavity, thickness of the spherical mirror, surface roughness and Fresnel number. The axial symmetry of the fabricated resonator allows us to preserve polarization direction of the resonant cavity TEM mode. The experiment to study circular polarization dependence of MIRO is underway.

Figure 3: (a) Homemade copper mirrors for confocal FB resonator. (b) Observed reflection spectrum as a function of aperture diameter at the center of the spherical mirror.

Decoupling of two systems can be realized by mismatch of their characteristic frequencies. To study the nature of friction, the interfacial dynamic motions of two lattices with microscopic lattice constants are of great interest. Wigner Crystal (WC) on liquid helium nicely presents the interaction between a lattice structure and a soft surface with a strong coupling. The kinetic energy of WC is transferred via many-electron coherent emissions into vibrational excitations of ripplons on the surface of liquid helium. This mechanism is described as the Bragg-Cherenkov scattering. Here we report the observation on suppression of Bragg-Cherenkov scattering of WC in the presence of an external periodic potential. We also propose a simple model that explains the suppression by the phase-mismatch between WC and ripplons as a result of the density modulation of surface-state electrons by the external periodic potential.

Figure 4: Suppression of Bragg-Cherenkov scattering. The measured signals are the current of surface-state electrons in solid phase moving through a 5-µm wide and 101-µm long channel. An external periodic potential of 1-µm in period is applied along the channel with the amplitude dV. Left: I-Vpp curves measured at different values of the amplitude of periodic potential dV, as indicated. The current plateaus correspond to the BC scattering regime. Inset: Same data organized as a 2D-plot showing I vs Vpp and dV. Right: Differential conductance dI/dVpp versus Vpp and dV, derived from the data presented in the inset. The bright yellow line, corresponding to transition from the BC regime to sliding regime, is clearly observed at low dV and completely disappears at higher dV.

We measured the T2n relaxation time of MnCO3 at temperature around 200 mK by observing the two-pulse spin echo decay. Due to the strong hyperfine interaction, the NMR frequency in the antiferromagnet MnCO3 is shifted by the coupling between nuclear spin and electron spin when cooled down to below 1K. This material may demonstrate strong coupling to a microwave resonator while remaining relative long coherence time compared with other magnetic materials (e.g. YIG). We made use of frequency modulation echo, which is a mechanism available for systems with large nonlinear frequency shift, to measure the relaxation time scale of MnCO3. It is found that the echo decay signal, therefore the T2n dephasing time of nuclear spins, have two distinct characteristic time scales which differ by an order of magnitude. The mechanism of nuclear spin dephasing is currently under investigation. 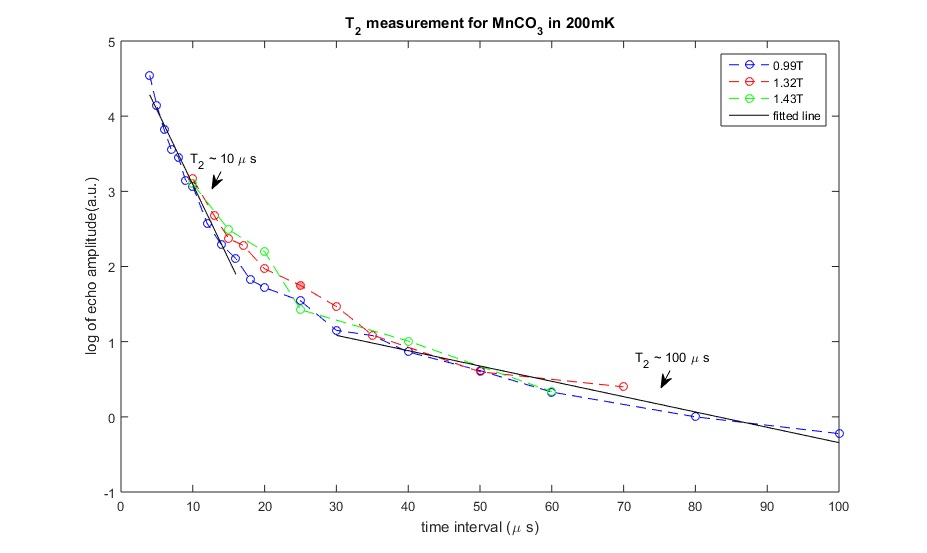 Figure 5. Decay of nuclear spin echo signal in log scale in a MnCO3 sample observed using the two-pulse echo technique at temperature T=220 mK. The experiments were performed under three different values (B=0.99, 1.32 and 1.43 Tesla) of the external magnetic field. The black line shows the estimated T2n by fitting the curves. It shows that it went through two stages of exponential decay with T2n ~10µs and T2n~ 100 µs.

For the electron spin resonance (ESR) spectroscopy of impurity spins in diamond at millikelvin temperature in a dilution refrigerator, such as nitrogen-vacancy (NV) or silicon-vacancy (SiV) centers, we designed, made, and tested microwave loop-gap resonators at room temperature. Figure 7 shows one of the tested resonators (top: photos, bottom: COMSOL simulation results for the design). 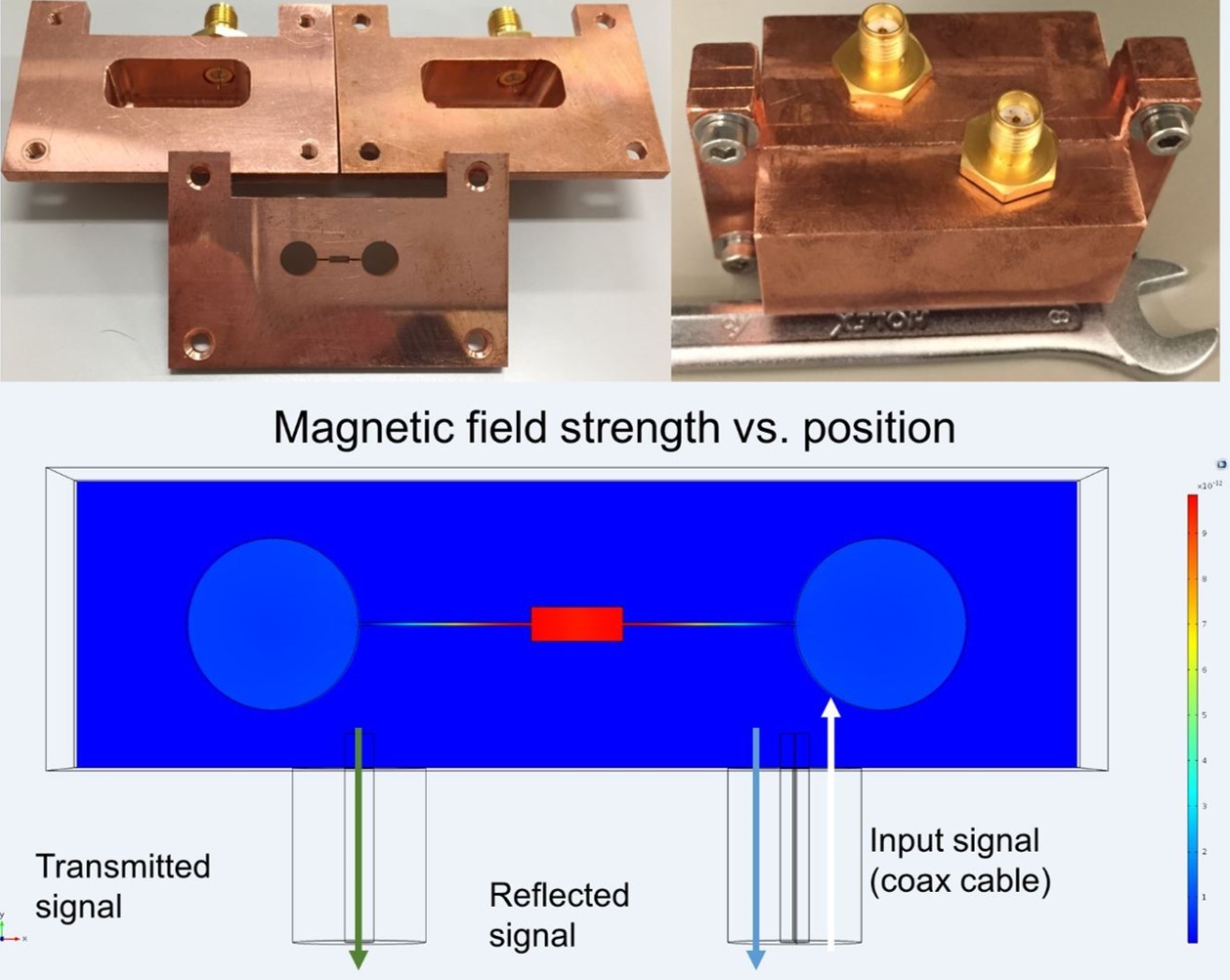 Figure 6.  A loop-gap resonator made and tested at the Quantum Dynamics Unit.

Quasi-1D Electron Systems on the Surface of Liquid Helium