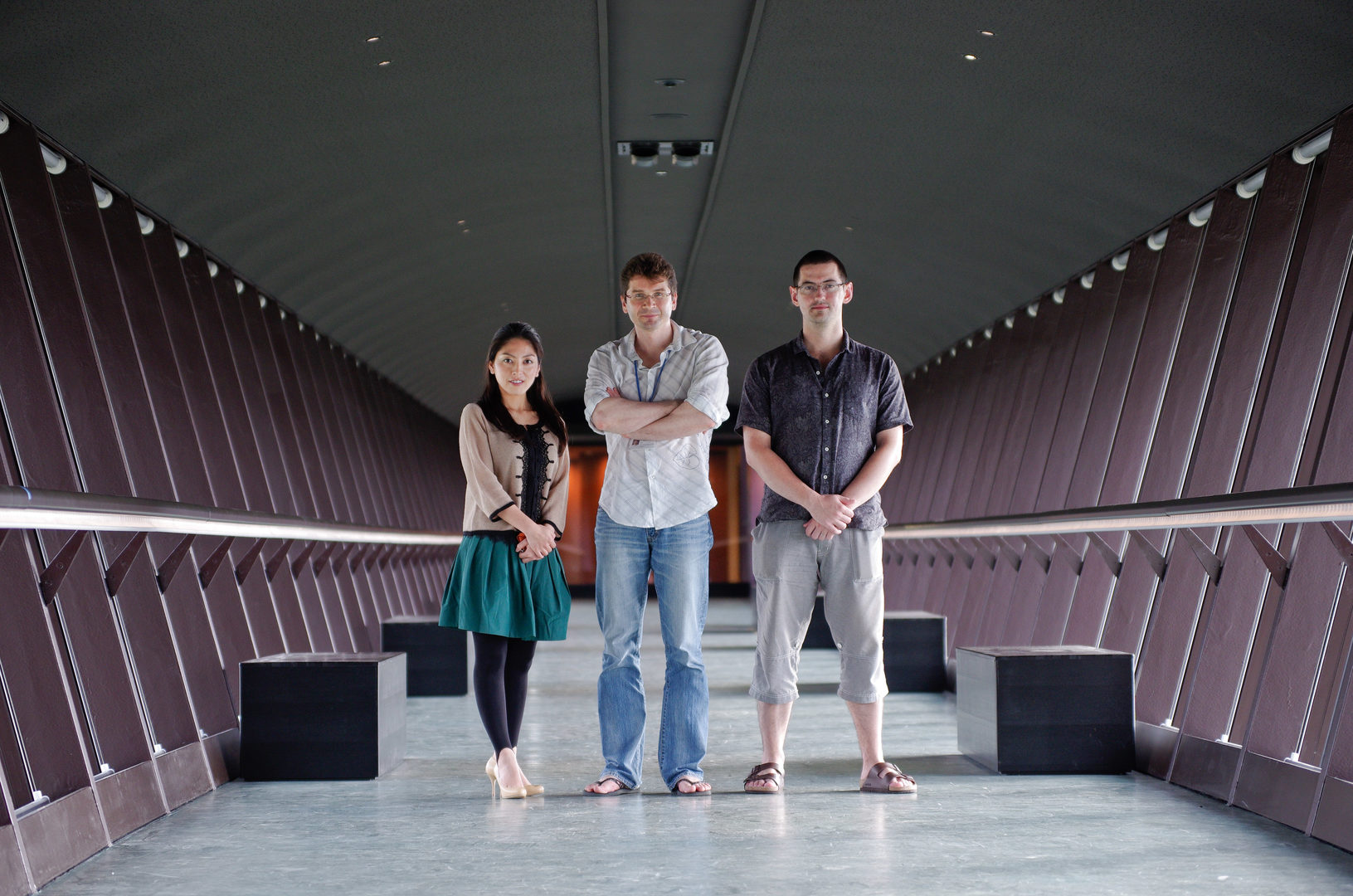 The Quantum Dynamics Unit aims at discovering and exploring novel quantum phenomena in strongly-correlated electron systems far from equilibrium. For this purpose we establish a new cutting-edge cryogenic lab at OIST to carry out low temperature experiments and investigate properties of a two-dimensional electron system on liquid helium under microwave irradiation. We also aim at developing robust techniques for orbital and spin quantum state manipulation necessary for qubit implementation with electrons on helium. We continue scientific collaboration with leading researchers in the field.

3.1 Preparation for low-temperature experiments at OIST

We  are young research group that started at OIST in July 2011. Our major efforts were directed to establish a new cryogenic lab and start low-temperature experiments with microwave-excited electrons on liquid helium. Starting from November 2011, Dr. Badrutdinov joint our group bringing his expertize in the research of mesoscopic structures, microwave measurements and ultra-low temperature techniques. While waiting for the cryogen-free dilution refrigerator, which will be delivered in June 2012, we made all necessary preparation for the experiment, such as, for example, built helium gas-handling system, 20 K refrigerator system, 100 GHz millimeter-wave transmission line, low-loss coaxial 20 GHz transmission lines, experimental cell with silver sinter heat exchanger etc. The new experiment will be ready to start in July 2012.

In collaboration with one of the leading experts in electrons on helium, Prof. Mark Dykman from Michigan State University, we developed a theory of the correlation-induced optical bistability of inter-subband absorption discovered earlier by members of our research group (e.g. see Phys. Rev. Lett. 103, 096801 (2009)). A full description of this phenomenon was given in terms of many-body quantum kinetic equation for strongly-correlated electrons, where the effect of electron-electron interaction on inter-subband transition frequency was estimated in the mean-field approximation. Fast inter-electron exchange of energy is crucial and leads to fast thermalization within the system with some effective electron temperature. Intuitively, the population of higher excited subbands results from, on the one hand, photon-induced and, on the other hand, scattering-induced inter-subband transitions (see Fig. 1). The dependence of inter-subband transition frequency on subband occupancy makes the quantum kinetic equation very nonlinear and results in the bistability of the response of the electron system to resonant radiation. The theory accounts well for the experimental observations. 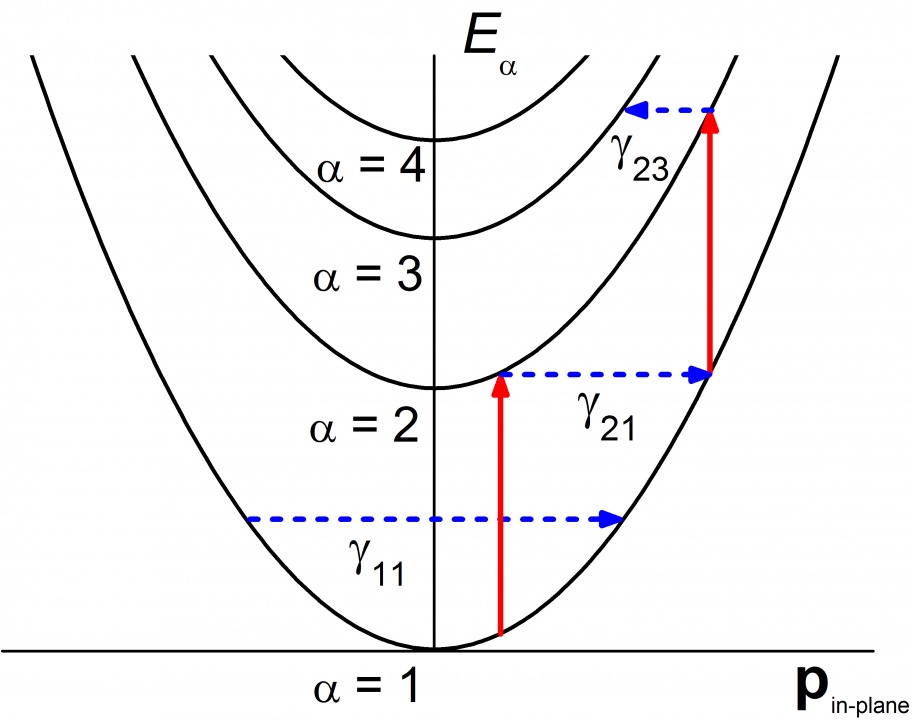 Figure 1: Schematics of the energy subbands and the electron transitions. Vertical (red) arrows indicate resonant photon-induced transtions from the ground subband to the first excited subband, while horizontal (blue) arrows indicate transitions due to elastic scattering by excitations in helium.

3.3 First study of ripplon-mediated relaxation of hot electrons on superfluid He-4 (Dr. Badrutdinov)

Surface states of electrons on liquid helium are one of the potential candidates for qubits, providing the advantage of scalability and extremely clean environment. The state of such a qubit is controlled by resonant radiation that excites transitions between two lowest quantum states. Coherence time of qubit is limited by interactions of electron with helium atoms and quanta of surface capillary waves (ripplons). By lowering temperature below about 700 mK the concentration of vapor atoms drastically reduces, however, ripplons still remain a significant source of decoherence. For electron qubit, the latter comes mostly from the relaxation of the excited state due to inelastic ripplon scattering. The knowledge about relaxation is mainly theoretical, and values derived by different theoretical models vary significantly. We developed a method to test the inelastic relaxation by heating the surface electrons by resonant microwaves and estimating the electron temperature from values of the electron conductivity. When electrons are tuned to inter-subband resonance, there conductivity changes due to heating as illustrated in see Fig. 2 (left). By solving the energy balance equation, which relates the power absorption of radiation and cooling of the system due to inelastic scattering, we find a theoretical relationship between conductivity change and microwave excitation rate related to the input microwave power. Using the rate of inelastic relaxation as an adjustable parameter, we can estimate it from the comparison of our calculations with the experimental data at different temperatures covering both vapor-atom and ripplon scattering regimes. Preliminary analysis is shown in Fig. 2 (right) and indicates the relaxation time in the range of 1-10 microseconds.

Figure 2: (left) Relative change of conductivity under irradation for different values of input microwave power. The resonance happens at the back-gate voltage of about 4.0 V and results in large conductivity change due to electron heating. (right) Comparison of theoretical estimates (lines) and experiemental data (symbols) for conductivity change versus input power.

3.4 Observation of self-generated oscillations in a nonequilibrium electron system

Self-organized phenomena characterized by spatiotemporal pattern formation often occur in systems driven away from equilibrium. They can be observed either as transients lasting over long time or as continuously sustained processes under external pumping to overcome dissipation. A strongly nonequilibrium spatial distribution of charge was observed in a screened electron system on liquid helium subjected to quantizing perpendicular magnetic field and external pumping of energy by resonant microwave excitation (arXiv:1101.5667). Recently, in addition to this effect, we detected spontaneously generated audio-frequency oscillations of charge in the nonequilibrium regime. An example of these oscillations recorded for electrons on liquid helium-3 is shown in Fig. 3.

Figure 3: Transient response of electrons on He-3 to the resonant microwave excitation (turned on at time t=0).

Peculiar feature of these self-organized oscillations is a temporal periodic variation of oscillation frequency. An example of a spectrogram of oscillations recorded for electrons on superfluid helium-4 is shown in Fig. 4. We speculate that the oscillations result from a classical Hall effect under the condition of nonequilibrium charge distribution. The Hall effect provides an effective inductance for moving surface charge which is capacitively coupled to metallic screening electrodes. As a result, the system resonates at a frequency which is inversely proportional to the product of the capacitance and the Hall resistance. The external microwave pumping provides a necessary mechanism to sustain the oscillations in spite of dissipation.

Figure 4: An example of spectrogram of oscillations recorded for electrons on superfluid He-4 under cw radiation.

The audible frequency range of these oscillations suggests an interesting possibility to hear the oscillations by ear. For this purpose, we recorded an analog signal and converted it to an audio file using an ordinary IC recorder.

Listen to an example of audio file of oscillations recorded for electrons on superfluid He-4 under cw radiation (recorded by Dr. Watanabe).

These self-generated oscillations present a rather unique example of non-autonomous dynamical process with deterministically time-varying frequency. Such processes are important for understanding dynamics of non-autonomous (thermodynamically open) living systems, for example cardiovascular activity. In the system of electrons on helium, the dependence of circuit parameters on time-varying quantities such as, for example, the areal density of 2D electrons, makes the theoretical analysis very complicated. We look for help from the experts in the field of nonlinear dynamics.