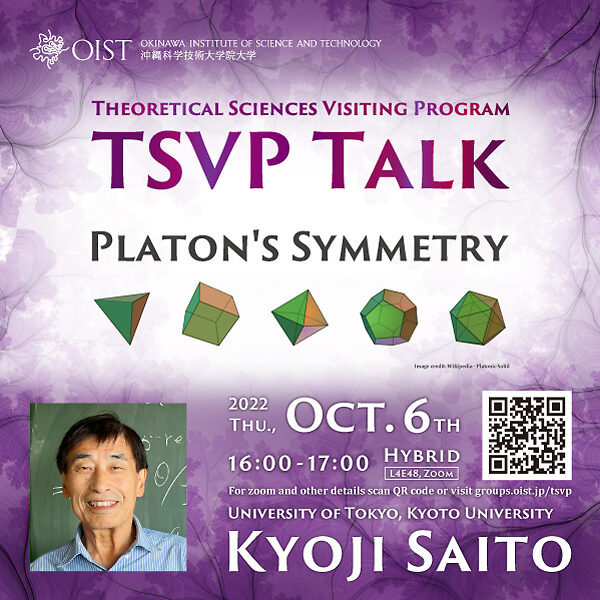 Dr. Kyoji Saito is visiting OIST from 2022/09/11 until 2023/01/15 through the "Theoretical Sciences Visiting Program" (TSVP). Find out more about the TSVP in this news article or the program website.
This seminar intended for a general audience and the research will be presented in an accessible manner. Everyone is welcome and encouraged to ask questions after the talk. Guests from outside OIST can join via Zoom.

Abstract: Humankind has long been attracted by symmetric figures. Already in 4000-years-old prehistoric remains found in Scotland, some "Platonic Solids" appeared (why these objects were made is a mystery). In the present talk, I want to show how Platonic Symmetry appeared in the history of mathematics in several different styles, and show how they appear even in modern mathematics, playing important roles even today.

Profile: Kyoji Saito is a Senior Scientist at the Institute for Physics and Mathematics of the Universe at the University of Tokyo, and a Professor Emeritus at the Research Institute for Mathematical Sciences of Kyoto University. His research area covers complex algebraic geometry, representation theory and mathematical physics. In particular, the theory of primitive forms, which he has developed, plays the role of mirror symmetry between complex geometry and mathematical physics. Inspired by these facts, he is now developing a new type infinite dimensional Lie theory, including elliptic Lie algebras and their representations. Personal Homepage

Target audience: General audience / everyone at OIST and beyond.
Freely accessible to all OIST members and guests without registration.

This talk will also be broadcast online via Zoom: