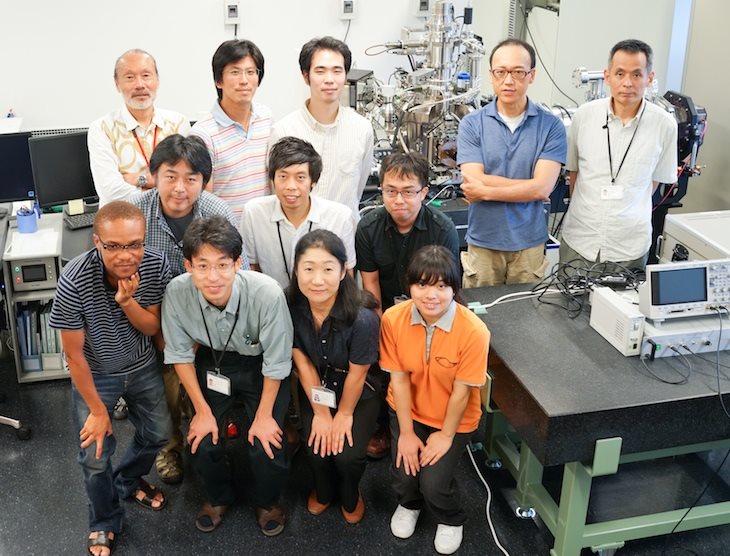 2. We proposed a ocean-current turbine as a sustainable energy source in 2012. The turbine will convert the kinematic energy of an ocean-current into electricity. So far, in order to verify our ocean-current turbine design, our group conducted various towing tests and mooring experiments by scale models. Now, we are working on developing a 10 kW model to perform a feasibility study by tidal current. In FY 2014, we conducted two R&D items. First, we installed an observation floating body to measure a tidal current and the floating body motion. Secondly, we evaluated the turbines that were designed by us. The performance was measured at a circulating water channel.

In principle, by applying the method of iterative phase retrieval on coherent diffraction data, one can determine the phase of the diffraction beam, and reconstruct the real image of the sample object (Fig.1). This process works correctly if the object has a two dimensional structure. The phase of the diffraction beam from an object of three dimensional structure, however, cannot be determined uniquely. We have found that we may solve this problem by introducing holographic image reconstruction.  To perform this experiment on biological sample, one may use an electron beam in low energy, in the range of a few keV to a few tens of keV, to prevent the beam damage on the target sample. And the sample needs to be a thin enough to allow for the transmission of the diffracting electrons.

Development of the electron diffraction microscope

Prior to 2014 we have developed an electron microscope with focused ion beam, DMF4000, which is capable of SEM imaging and FIB etching. We also have developed the electron beam transport system which is to obtain the diffraction patterns of scattered electron of low energy electron beam, smaller than a few keV energy. The essential features of this system are the 2dimensional detector of 8k x 8k COMOS sensors and electron optics system, which make possible to measure the diffraction pattern produced by large Bragg angles of atomic scale spacing. The unit has also been developing a technique of FIB-etching the test target smaller than a few hundred nanometers, compatible to the actual viral size, on metal coated TEM grids.

With the test target the unit has developed the techniques of producing the holography image in a few nanometers resolution. It was found that in addition to the properties of electron beam, such as coherency and stability, the physical properties of the surface of the TEM grid play a major role for the re-constructability of holography and high resolution. The development of the reconstruction technique of the real image from the holography pattern in a stable manner is actively under progress.

To facilitate the holographic diffraction imaging on insulating biological specimens, we have been optimizing the specimen design with the following technical considerations in mind; 1) specimen transparency to low energy electrons, 2) specimen charge-up upon electron beam irradiation, and 3) changes in specimen morphology by vacuum dehydration. To address 1) and 2), we have developed the graphene support film for biological specimens, which is only one carbon atom thick and is highly conductive. We have established a fabrication scheme for the graphene TEM grids so far. Regarding 3), we have developed on virus and DNA specimens a freeze drying technique, which preserves the fine sample structures to a few nm resolution. Future work will address the implementation of the common technique of ice embedding  for the low energy electron imaging on freeze-hydrated specimens. 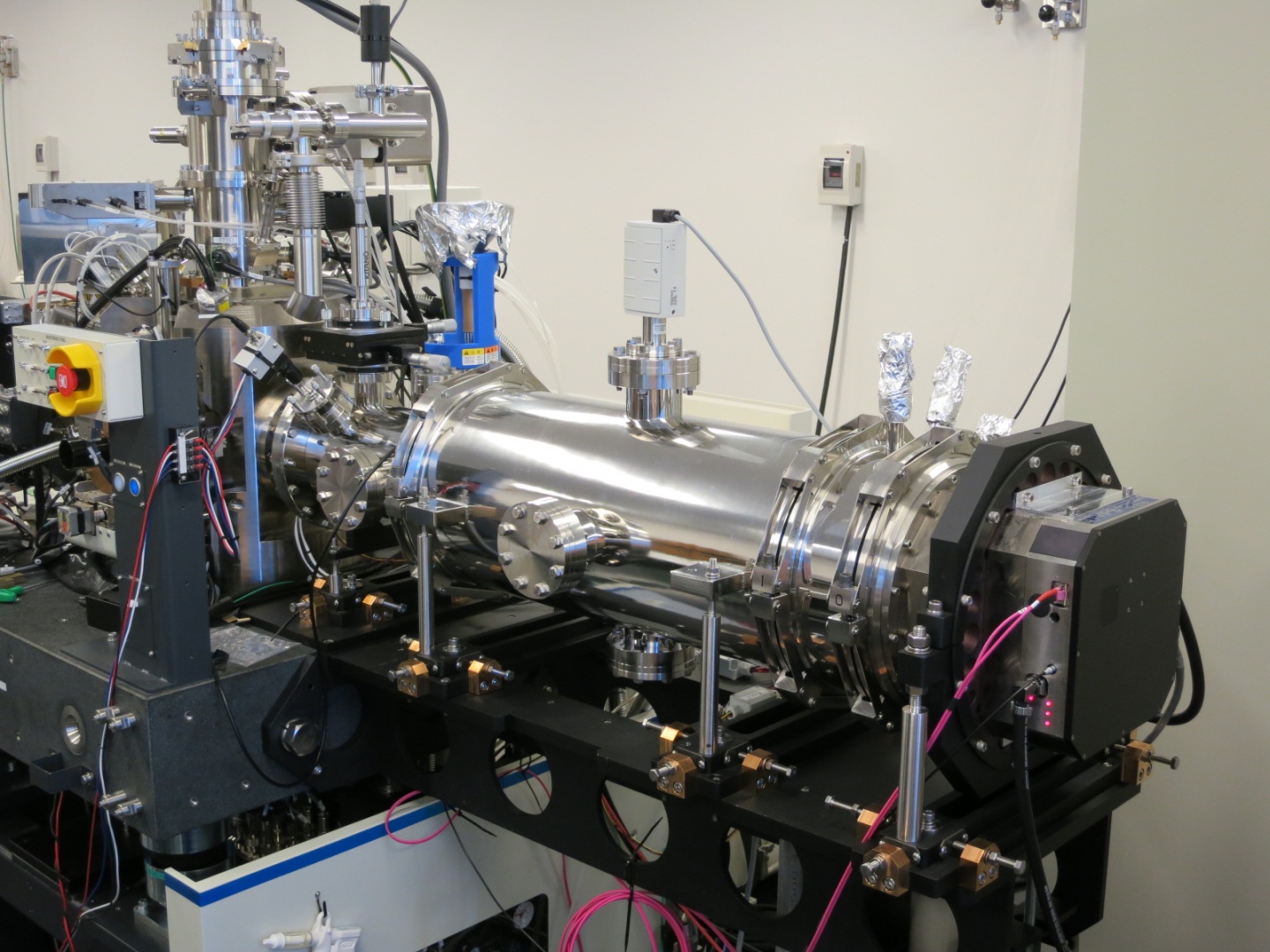 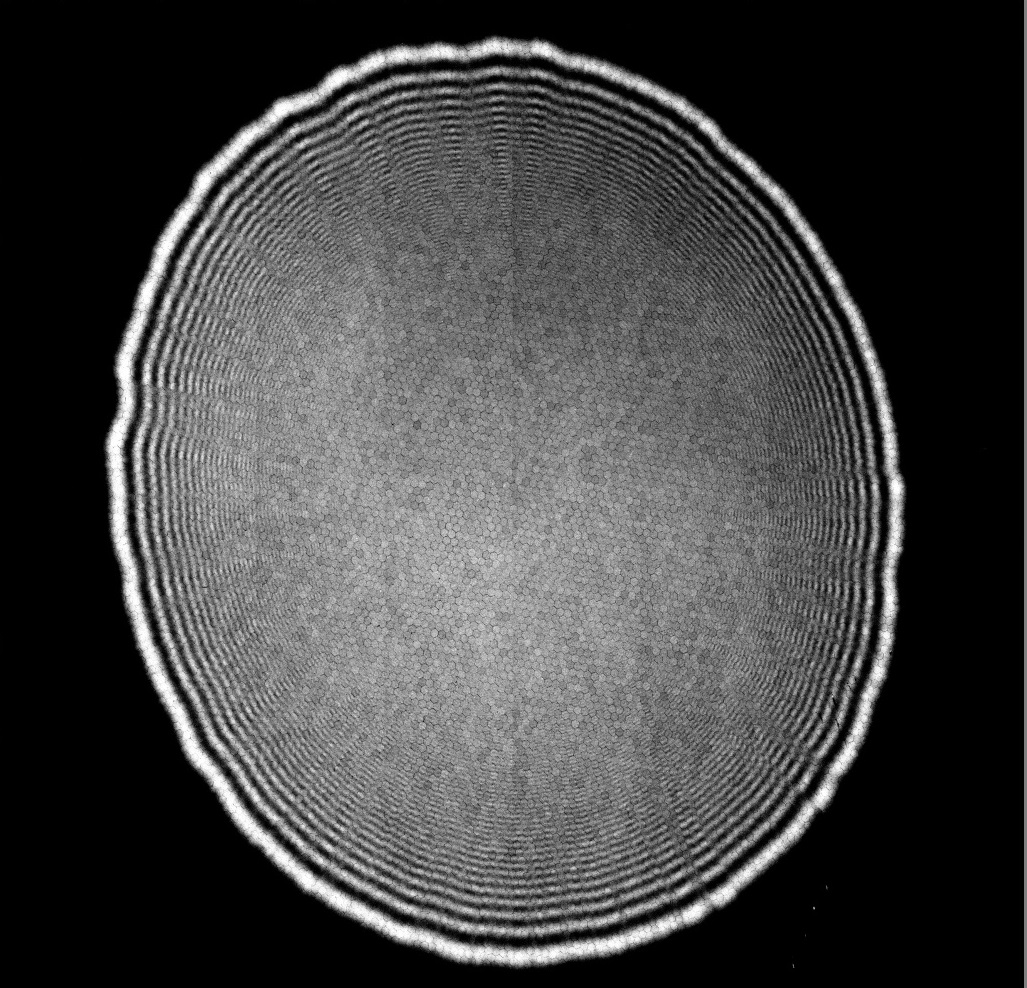 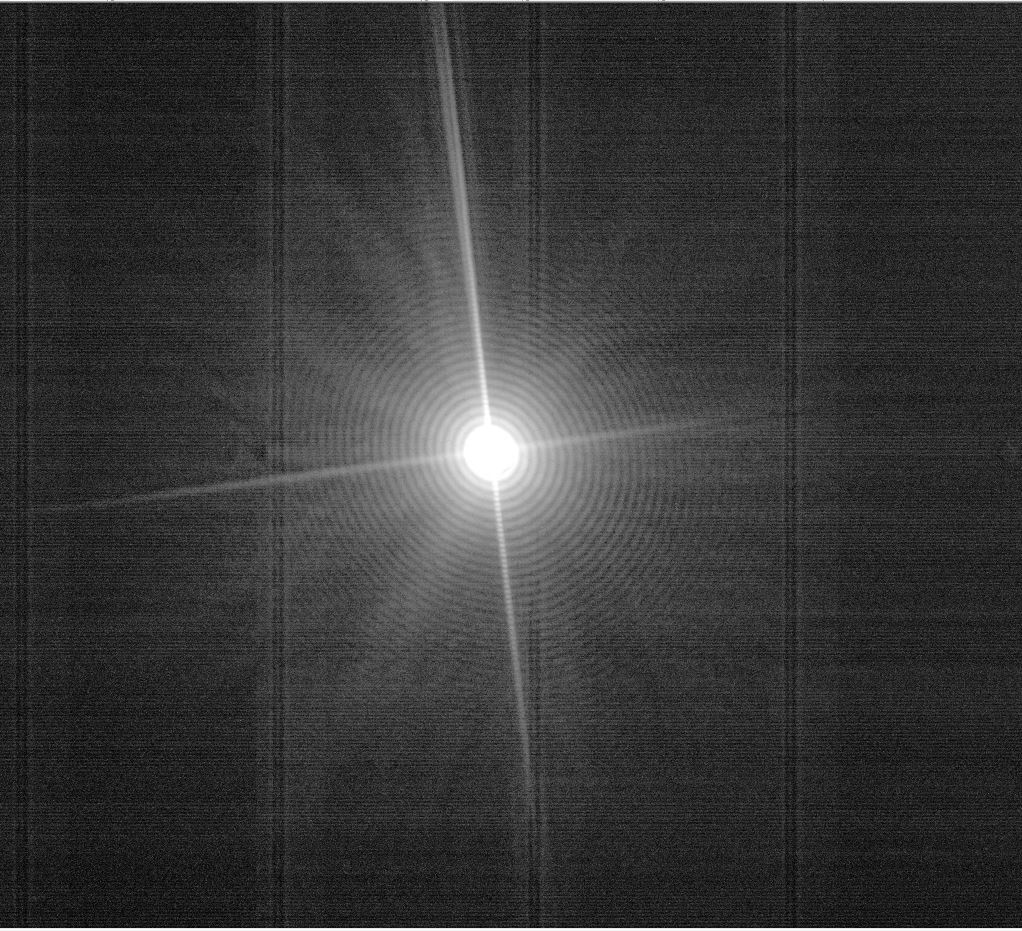 Figure 3.: Diffraction image from our test target taken F816 CMOS detector. The resolution in the holography image from this diffraction is estimated to be 3~4 nanometers. 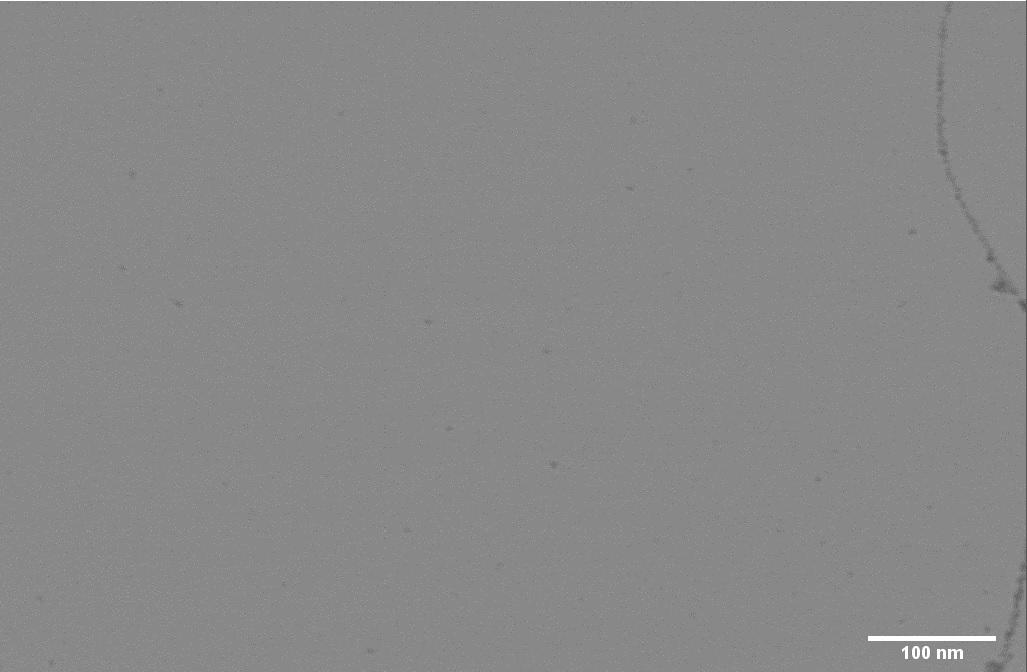 Figure 4.: 10 kV scanning transmission electron microscope (STEM) image of the graphene support film. The two lines in the image correspond to the boundary of two graphene domains but otherwise the graphene shows no texture.

Our ocean-current turbine will work in a middle layer of an ocean current to avoid ocean waves. In FY 2014，in order to obtain real tidal current data, we installed the observation floating body into the northern sea of Okinawa. The schematic diagram is shown in Fig. 1.Th e floating body is equipped with depth meters, thermometers and accelerometers. On the sea surface, the communication buoy is working to send the measured data to our database. In addition, the buoy has an ADCP (Acoustic Doppler Current Profiler) to measure current speed, direction and profile. We will analyze the measured data to optimize our turbine performance and mooring system. 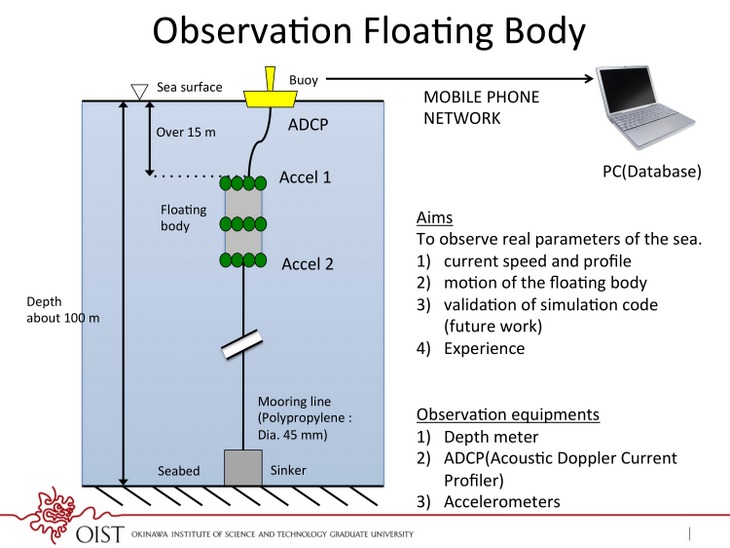 We designed three scale model turbines to investigate the power performance. The scale models were processed by a 5-axis CNC machine. The material is aluminum and the diameter is 300-mm. The photograph of the turbine is shown in Fig. 2. The performance was evaluated at a circulating water channel of the West Japan Fluid Engineering Laboratory Co., LTD. We measured the torque, rotation speed and thrust force. The results are in good agreement with the design values. The maximum power coefficient (Cp) was 0.42. As the next step, we are going to design more efficient turbine and optimize the turbine structure for ocean currents. 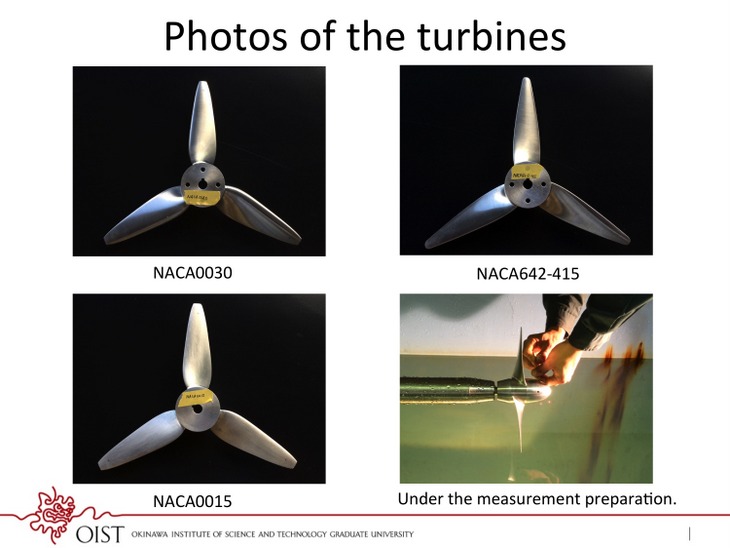 Title: Coherent Diffractive Imaging of Cells and Macromolecular Complexes at SPring-8 and SACLA