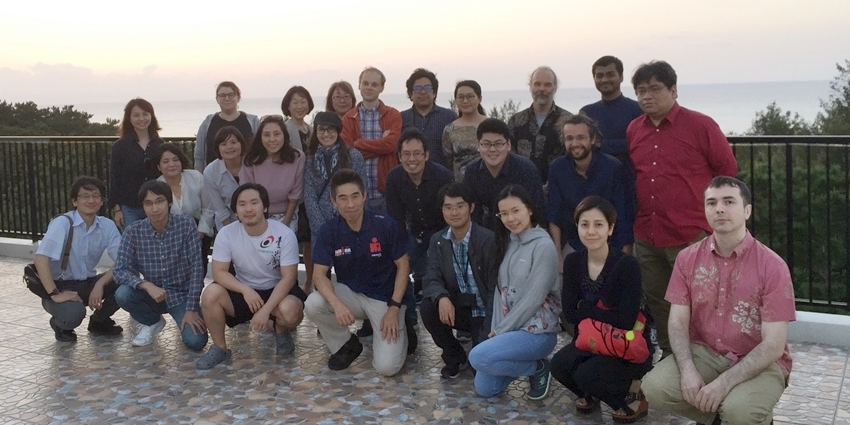 The Neural Computation Unit pursues the dual goals of developing robust and flexible learning algorithms and elucidating the brain’s mechanisms for robust and flexible learning. Our specific focus is on how the brain realizes reinforcement learning, in which an agent, biological or artificial, learns novel behaviors in uncertain environments by exploration and reward feedback. We combine top-down, computational approaches and bottom-up, neurobiological approaches to achieve these goals.

In the Kakenhi project on Artificial Intelligence and Brain Science, in oder to explore what we can learn from the brain for next-generation AI, we organized a joint workshop in London with researchers from Gatsby Computational Unit and DeepMind and also symposia at JNSS conference in Yokohama and JNNS conferenve in Fukuoka.

In the Post-K supercomputing project on Brain and Artificial Intellignece, we built biologically constrained spiking neural network model of the basal ganglia circuit and started to integrate that with the thalamo-cortical network model constructed by our collaboratos at RIKEN for large-scale simulations.

The striatum consists of the striosome (patch) compartment, which projects to the dopaminergic neurons of the substantia nigra pars compacta (SNc), and the matrix compartment projecting to the pallidum. We previously hypothesized that the striosome compartment represents the state value, whereas the matrix represents the action value in reinforcement learning (Doya, 2000). To test this hypothesis, we conducted endoscopic in vivo calcium imaging of transgenic mice with selective GCaMP6s expression in the striosome neurons. As mice learned odor-based classical conditioning task, we found reward predictive neural activities, in consistence with the hypothesis (Yoshizawa et al. 2018).

We designed a new experimental paradigm to address how predictive information from actions and sensory information through environmental interaction are integrated across different layers of the  somatosensory and motor cortical circuits in mice. We developed a novel active level manipulation tasks for head-fixed mice and prepared for simultaneous cross-layer calcium imaging by a prism lens.

3.1.3 The role of serotonin in the regulation of patience [Kakenhi Project on AI and Brain Science]

In order to clarify the role of serotonin in behaviors, we performed neural recording, microdialysis measurement, and optogenetic manipulation of serotonin neural activity from the dorsal raphe nucleus (DRN), the major source of serotonergic projection to the cortex and the basal ganglia. We had found that optogenetic stimulation of DRN serotonin neurons prolonged the time animals spent for waiting for reward (Miyazaki et al., 2016). We further found that serotonin’s effect on waiting was seen only when reward probability was high, and more effective when reward timing was uncertain. We are constructing a Bayesian decision model to reproduce the experimental results.

For data-driven identification of subtypes of depression, we dveloped a novel multiple co-clustering algorith (Tokuda et al., 2017). We are applying this method to high-dimensional data including resting-state functional MRI data, blood markers, genetic polymorphism, and clinical questionnaires, obtained by our collaborators at the department of psychiatry, Hiroshima University School of Medicine.

We develop data-analysis pipelines and modeling methods to utilize the variety of marmoset brain data obtained in the Brain/MIDNS program. We have developed Bayesian synaptic connectivity inference algorithms, a framework for optimizing diffusion MRI-based fiber-tracking algorithm in reference to neural tracer data, and a framework to integrate the structural connectivity based on diffusion MRI data and the resting-state functional MRI data.

While the combination of reinforcement learning with deep neural networks has shown remarkable performance, the requirement of huge data for training is a major issue in robotic applications. We developed the Expected Energy-based Restricted Boltzmann Machine (EE-RBM) to approximate the action value function and showed its excellent performance in benchmarks of tetris and Atari games. The study also lead us to propose sigmoid-weighted linear units (SiLU) as a general tool in deep neural networks (Elfwing et al., 2018). We also formulated a class of approximate value iteration algorithms and mathematically showed their data efficiency and robustness to approximation errors. We are also investigating the issues in gradient computation in model-based reinforcement learning.

Inverse reinforcement learning (IRL) is a method of estimating a reward function by observing an agent's behavior. We formulated IRL as a binary logistic regression problem and derived an efficient algorithm that is applicable to deep learning networks (Uchibe, 2017).

Joint Workshop at The Next Generation Brain Project 2017 Winter Symposium