We have been developing small organic molecule catalysts (organocatalysts) and organocatalytic molecular transformation methods useful for the synthesis of functionalized molecules under mild conditions in short routes.  We also investigate the chemical bases of the catalyses and the chemical transformations to understand the mechanisms of the catalysis and molecular interactions provided by organic molecules to further the creation of useful molecules. 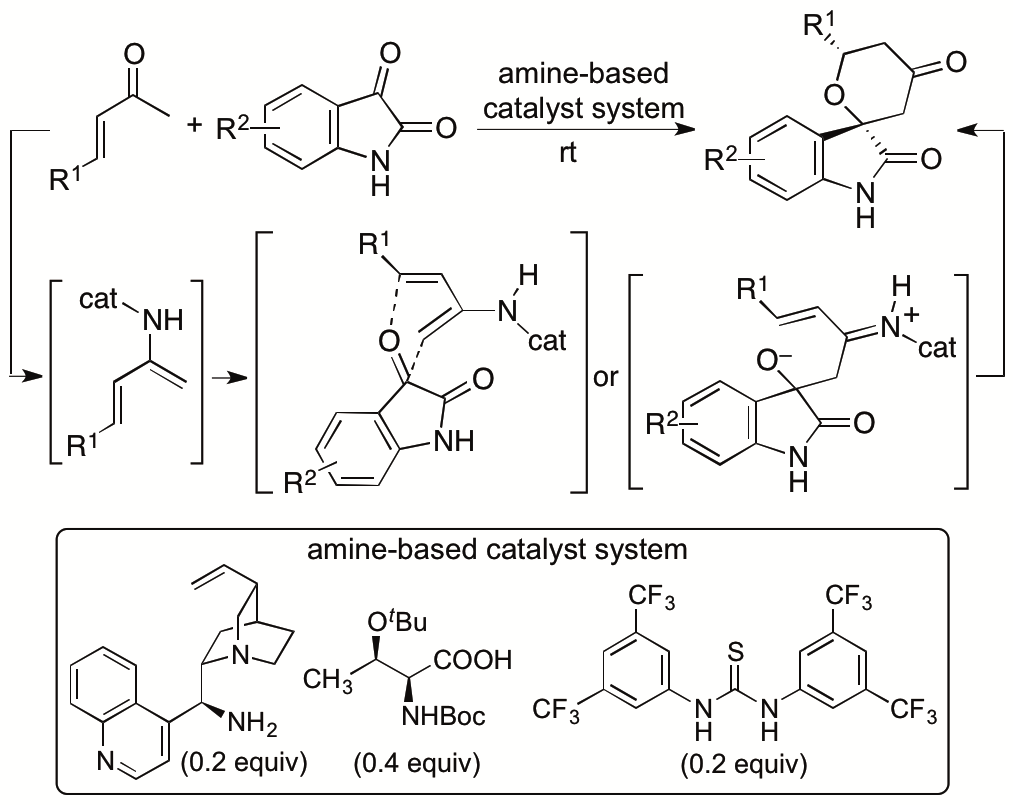 Pyruvates can act as nucleophiles and electrophiles and thus are expected to be useful synthons.  However, the dual reactivities of pyruvates are difficult to control.  We have recently developed concise cascade reactions of pyruvates to provide various functionalized dihydropyrans in one pot under mild conditions (Scheme 3) (Chouthaiwale and Tanaka, Chem. Commun. 2014, 50, 14881).  Further, we have demonstrated that the product dihydropyrans are readily transformed to various molecules including amino group-substituted and fluoro group-substituted dihydropyrans, cyclohexane-derived amino acids, dihydrodiazepines, and pyridines.  To further simplify the synthesis, we have developed a one-pot method; 4-substituted-pyridine-2,6-dicarboxylic acid derivatives were synthesized in one pot from pyruvates and aldehydes (Chouthaiwale, Lapointe, and Tanaka, Heterocycles 2017, 95, 587).  We have also synthesized furopyrans and related derivatives from the dihydropyrans (Chouthaiwale, Aher, and Tanaka, Heterocycles, doi: 10.3987/COM-18-S(T)29).

The dihydropyrans obtained from pyruvates and aldehydes by our method retain the a-keto ester groups of pyruvates and are C2 symmetric molecules.  Taking advantage of the features of the dihydropyrans, we have developed catalytic enantioselective formal (4+2) cycloaddition via aldol-aldol annulation reactions of the dihydropyrans with cyclohexane-1,3-diones that afford functionalized decalins (Scheme 4) (Chouthaiwale, Aher, and Tanaka, Angew. Chem. Int. Ed. doi: 10.1002/anie.201808219).  Polyfunctionalized decalins bearing five to six chiral carbon centers were obtained as single diastereomers with high enantioselectivities.  Our strategy enabled the construction of five to six stereogenic centers from achiral molecules in a single transformation that formed two C-C bonds.  We are investigating the mechanism of the reaction that gives the products as single diastereomers with high enantioselectivities.

We are further developing transformation methods that use the dihydropyrans obtained from pyruvates and aldehydes to concisely provide enantiomerically enriched, polyfunctionalized molecules by taming the reactivities of pyruvate derivatives.

We have recently developed DBU-catalyzed aldol reactions that provide desired products with notable regioselectivities (Zhang, Johnson, Cui, and Tanaka, Asian J. Org. Chem. 2014, 3, 391; Zhang and Tanaka, Adv. Synth. Catal. 2015, 357, 3458).  In these DBU-catalyzed aldol reactions, the C-C bonds formed in perfect regioselectivities at the methyl groups of alkyl methyl ketones, at the γ-positions of β-keto esters, and at the methyl groups of the β-methyl-substituted cyclic enones (Scheme 6).  For the aldol products from the β-keto esters, enantiomerically pure forms were obtained by the resolution of the enamines of the aldol products with a homochiral amine.  Using the obtained enantiomerically pure forms of the aldol products derived from the β-keto esters, we have also shown that enantiomers of chiral primary amines are concisely detected by 1H NMR through the formation of the enamines with the aldol products (Zhang, Chuang, Cao, Krishna, Shilpa, and Tanaka, Tetrahedron Letter, 2018, 59, 2248).  With this detection method by 1H NMR analyses, determination of enantiomer ratios of the amines, including those that have the chiral centers at positions remote from the amine groups, was also possible.  The DBU-catalyzed aldol reactions allowed the access to the aldol products useful for various purposes.

As a next stage, we are designing and synthesizing DBU-inspired chiral versions of catalysts to perform enantioselective aldol reactions and related reactions.  We are also developing DBU-catalyzed Mannich reactions and other reactions.

As described above, we have shown that the DBU catalysis provides notable regioselectivities in aldol reactions.  In the catalyzed reactions of ketones, the relationship between the formation of enolates or enamines and the formation of products, including regioselective formation of products, is not well understood.  When a ketone has two enolizable α-positions, the carbanion may form at both the α-positions or at either of the α-positions.  Regioselectivities of catalyzed aldol and related reactions may be the results of regioselective formation of an enolate/enamine or because a single type of enolates/enamines among those formed results in product formation.  To provide insight into aldol reaction catalysis, the relative frequencies of carbanion formation at each a-position of ketones under catalysis by DBU, proline, and related catalysts were determined through the deuteration of the ketones in the presence of these catalysts (Scheme 7) (Zhang and Tanaka, Org. Lett. 2017, 19, 3803).  For the reaction of 1,1-dimethoxypropan-2-one, the deuterated site matched the C-C bond formation site in the aldol reactions, and faster reaction by the DBU catalysis than that by proline catalysis was in accord with the faster deuteration rate by DBU than that by proline catalysis.  For other ketones tested in this study, such as 2-pentanone, methoxyacetone, hydroxyacetone, and ethyl 3-oxobutanoate, however, the positions favored for deuteration did not directly correlate with the C-C bond formation sites in aldol and related reactions.  Formation of carbanions (or enolates/enamines) is necessary to be the reaction site, and for fast reactions, rapid or frequent enolate/enamine formation is required.  But, the results indicate that frequent carbanion formation site is not necessary to be the C-C bond formation site.  Through this study, mechanisms of regioselectivities of the reactions and mechanisms of catalysis were clarified to some degree.

We have been developing concise fluorescence-based assay methods to monitor bond-forming and bond-breaking reaction progress on a small scale to facilitate the development of catalysts and catalyzed chemical transformation methods.  Use of fluorogenic substrates provides a straightforward method of reaction monitoring because reaction progress is directly observed as an increase in fluorescence.