The ability to design and synthesize organic molecules constitutes the foundation of that underlies basic research as well as applied science. It is also essential for the development of pharmaceuticals and biofunctional molecules. This unit develops new, efficient, concise, and safe chemical transformation methods and strategies for constructing small molecules bearing functional groups and/or chiral centers that are relevant to the creation of biofunctional molecules. We design and create small organic molecule catalyst systems to enable to perform designed chemical transformations and develop reaction strategies that use small organic molecules as enzyme-like catalysts. With the use of organic molecules as catalysts, we minimize the need for protection and deprotection steps that are usually required for the synthesis of functionalized molecules. When a reaction method does not affect functional groups that are not at the reaction site, the reaction method can be used for the synthesis of a series of molecules bearing various functional groups. That is, a series of molecules of interest may be synthesized using the same method in a short route, providing advantages for the synthesis of biofunctional candidate molecules. We also investigate the chemical bases of the reactions to understand the mechanisms of the catalysis and molecular interactions provided by organic molecules. By taking advantage of the use of features of our developing molecules, we also develop strategies and methods to conjugate proteins and peptides with other molecules. The molecules that we have synthesized are screened in various functional assays in collaboration with other research groups. The research undertaken by this unit advances the chemistry of catalysis and of molecular synthesis. The studies by this unit accelerate the creation of molecules used in biomedical research and contribute to the development of new therapeutics, therapeutic strategies, and diagnostics.

We have been developing small organic molecule catalysts (organocatalysts) and organocatalytic molecular transformation methods useful for the synthesis of functionalized molecules under mild conditions in short routes. We also investigate the chemical basis of the catalysis and the chemical transformations to understand the mechanisms of the catalysis and molecular interactions provided by organic molecules to further the creation of useful molecules.

Traditional synthetic methods often require high or very low temperature and/or absolute conditions. In addition, functional groups on substrate molecules must be protected prior reactions.  That is, depending on functional groups present in target molecules to be synthesized, synthetic routes, including protection and deprotection steps, have to be designed for each molecule. To concisely synthesize functionalized molecules, chemical transformation methods that are not affected by functional groups presenting in starting materials are needed. It is a great advantage when the same reaction method can be used for the synthesis of a series of molecules bearing various functional groups without the need of product-specific protection and deprotection steps. In addition, it is desired that such reactions can be performed under safe, mild, and environmentally benign conditions. We address these points in our research as we design and develop catalysts and chemical transformation methods. By using organic molecules as catalysts, we concisely synthesize novel functionalized molecules including those that are often difficult to synthesize by traditional synthetic strategies. Our studies provide molecules that are screened for bioactive candidates and contribute to the creation of new functional molecules.Our investigation on the chemical basis of the developed catalysts and chemical transformation methods further the understanding of the chemistry of organic molecules and their reactions.

One of the recent achievements of this unit is the development of catalytic asymmetric hetero-Diels-Alder reactions of enones with isatins (2,3-dioxyindoles or 2,3-dioxyindolins) that provide functionalized spirooxindole tetrahydropyranones with high diastereo- and enantioselectivities (Scheme 1) (Cui & Tanaka, Chem. Eur. J. 2013, 19, 6213). Novel amine-based catalyst systems composed of three-types of molecules (amine, acid, and thiourea) have been developed to catalyze the reactions. Various spirooxindole tetrahydropyranones were synthesized by this developed reaction method. 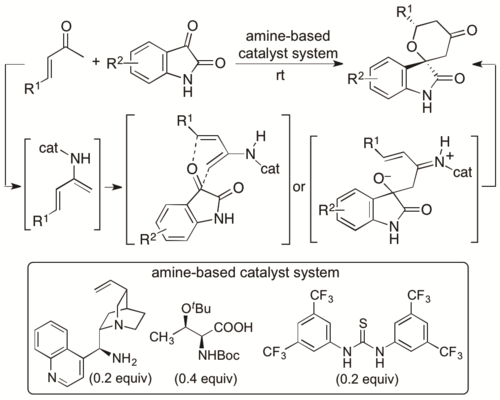 The products of the reactions retain the ketone and amide groups. With transformations at these reaction sites, various spirooxindole tetrahydropyran derivatives were also synthesized (Cui, Chouthaiwale, Yin, & Tanaka, Org. Biomol. Chem. 2016, 14, 259). As both the spirooxindole derivatives and the tetrahydropyranes are found in many bioactive molecules, our synthesized molecules are of interest. In our reaction system, selections of the R1 and R2 groups of the starting materials enones and isatins to form the oxa-hetero-Diels-Alder reaction products and further transformations of the products at the ketone and amide groups allow concise, atom-economical access to various spirooxindole tetrahydropyran derivatives bearing functional groups in four directions in a three-dimensional space (Scheme 2). This structural feature would be useful in the search for new functional molecules. In fact, synthesized spirooxindole tetrahydropyrans were screened in bioasay systems and an inhibitor of human ion channel Nav1.7 with µM-level activity was identified (see also Section 2.4). 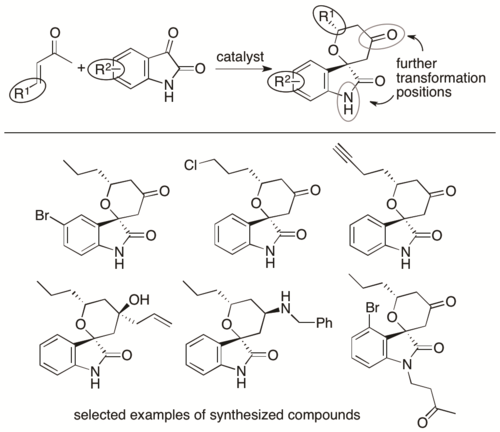 We investigated the mechanism of the reactions and key factors for the high diastero- and enantioselectivities achieved by the three-component catalyst system (Cui, Chouthaiwale, Yin & Tanaka, Asian J. Org. Chem. 2016, 5, 153). Our reaction-based investigation indicated that the products were formed via a kinetically controlled [4+2] cycloaddition of the in situ-generated enamine of the enone as the diene and isatin as the dienophile (Scheme 3). In the transition state of the [4 + 2] step, the acid component of the catalyst system likely interacts with the tertiary amine and contributes to the stereocontrol.

The design and synthesis of catalysts that function as one molecule by providing all the required interactions for the catalysis and stereocontrol of designed reactions especially for new reactions are often difficult. We have demonstrated that the use of multicomponent catalyst systems provides a way to bypass the limitations in accessing to single component catalysts.

We have recently developed concise, fast DBU-catalyzed aldol reactions of a pyruvic aldehyde derivative 1,1-dimethoxypropan-2-one with isatins (Zhang, Johnson, Cui & Tanaka, Asian J. Org. Chem. 2014, 3, 391). We have expanded the DBU-catalysis to aldol reactions of aryl trifluoromethyl ketones with various donor substrates to give trifluoromethyl-substituted tertiary alcohols (Zhang & Tanaka, Adv. Synth. Catal. 2015, 357, 3458). In these DBU-catalyzed aldol reactions, the C-C bonds formed in perfect regioselectivities at the methyl groups of alkyl methyl ketones, at the γ-positions of β-keto esters, and at the methyl groups of the β-methyl-substituted cyclic enones (Scheme 5). For the aldol products from the β-keto esters, enantiomerically pure forms were obtained by the resolution of the enamines of the aldol products with a homochiral amine. With DBU as the catalyst, construction of tetra-substituted alcohols bearing the trifluoromethyl group, which is difficult and/or usually requires severe conditions to synthesize, was concisely achieved under mild conditions. In addition, concise resolution method was established to provide access to pure enantiomers of the products from the reactions of β-keto esters. We are also designing and synthesizing DBU-inspired chiral versions of catalysts to perform enantioselective aldol reactions and related reactions.

Pyruvates can act as nucleophiles and electrophiles and thus are expected useful synthons. However, the dual reactivities of pyruvates are difficult to control. We have recently developed concise cascade reactions of pyruvates to provide various functionalized dihydropyrans in one pot under mild conditions (Scheme 6) (Chouthaiwale & Tanaka, Chem. Commun. 2014, 50, 14881).  Further, we have demonstrated that the product dihydropyrans are readily transformed to various molecules including amino group-substituted and fluoro group-substituted ddihydropyrans, cyclohexane-derived amino acids, dihydrodiazepines, and pyridines.

To further simplify the synthesis, we developed a one-pot method; 4-substituted-pyridine-2,6-dicarboxylic acid derivatives were synthesized in one pot from pyruvates and aldehydes (Chouthaiwale, Lapointe, & Tanaka, Heterocycles, in press).

Carbohydrate backbone-elongation reactions at anomeric carbons are important for the synthesis of higher carbon-backbone carbohydrates and C-glycosides. Generally, reactions on carbohydrates require protection of hydroxy groups that are later deprotected. If unprotected carbohydrates could be used as substrates, the methods would be atom- and step-economical. There are only limited numbers of non-enzymatic direct C-C bond forming reactions at the anomeric carbon of unprotected aldoses that are mainly present as cyclic hemiacetals. We developed direct C-glycoside formation reactions of unprotected 2-N-acetyl-aldohexoses via aldol condensation-oxa-Michael reactions catalyzed by amine-based catalysts (Scheme 7) (Johnson & Tanaka, Org. Biomol. Chem. 2016, 14, 259).

This unit has also been developing concise fluorescence-based assay methods to monitor bond-forming and bond-breaking reaction progress on a small scale to facilitate the development of catalysts and catalyzed chemical transformation methods. Use of fluorogenic substrates provides a straightforward method of reaction monitoring because reaction progress is directly observed as an increase in fluorescence.