The problem of time and relational quantum dynamics

In general relativity, time plays a different role than in classical and quantum mechanics, or quantum field theory on a Minkowski background. General covariance dispenses with a preferred choice of time and introduces instead a dynamical notion of time which depends on solutions to the Einstein field equations. In the canonical approach to quantum gravity this leads to the infamous problem of time. Its most well-known facet is that, due to the constraints of the theory, quantum states of spacetime (and any matter contained in it) do not at first sight appear to undergo any time evolution, in seeming contradiction with everyday experience.

The resolution comes from one of the key insights of general relativity: any physical notion of time is relational, the degrees of freedom of the Universe evolve relative to one another. This insight has led to three main relational approaches to the problem of time, each of which seeks to extract a notion of time from within the quantum degrees of freedom, relative to which the others evolve:

These three approaches have been pursued largely independently with the relation between them previously unknown.

We have worked on all three of these approaches and have, in fact, recently shown that they are equivalent in a wide class of models by constructing explicit maps between them. This unification permitted us to resolve a number of criticisms and shortcomings of the various approaches in the literature. 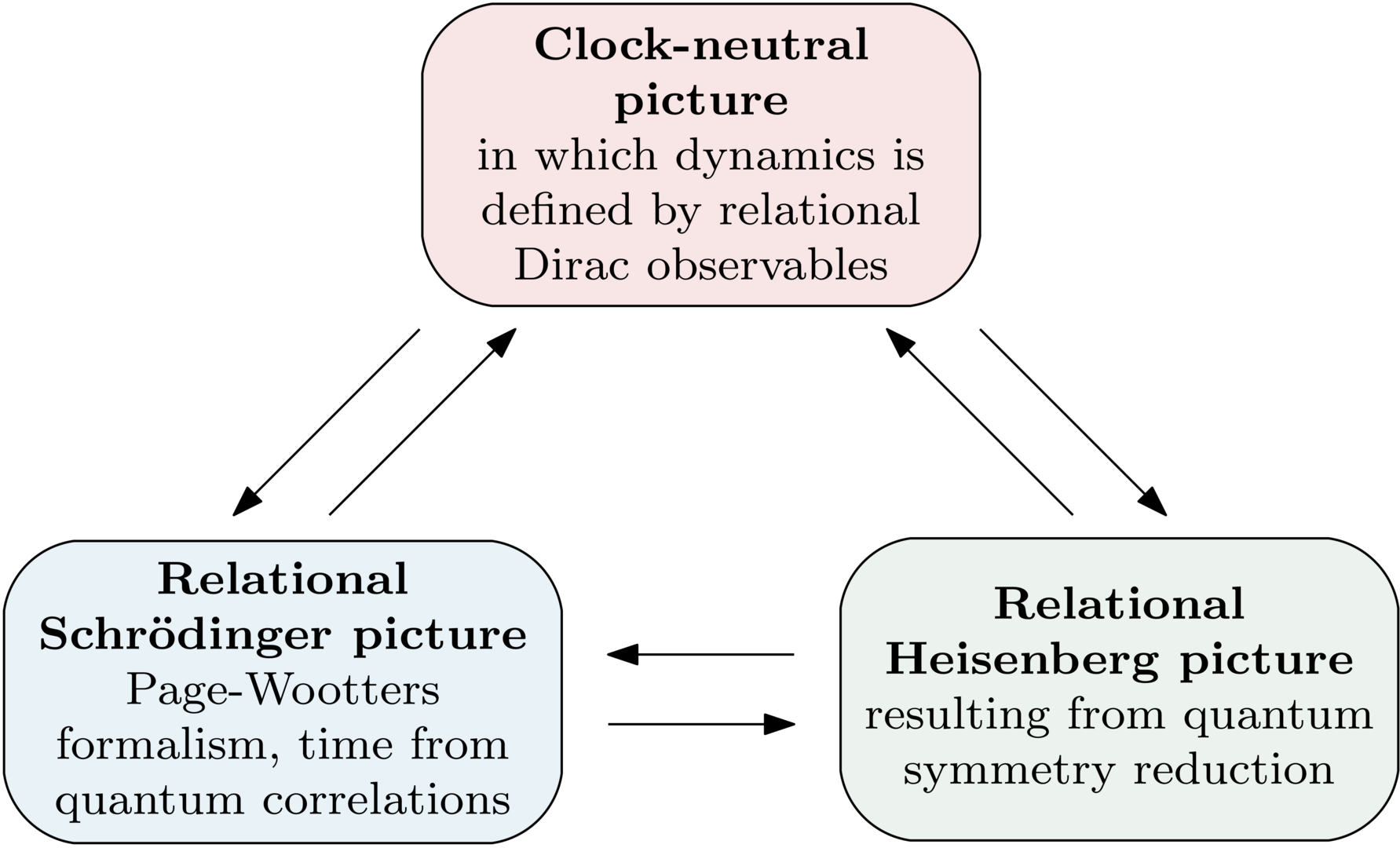 Some of our work on relational quantum dynamics overlaps with the work on quantum reference systems and quantum general covariance. In particular, we have developed a systematic method for changing temporal reference systems in the full quantum theory. In other words, the method permits one to change from the evolution relative to one quantum clock to one relative to another. The classical analog of this is straightforward, but the quantum version is non-trivial and becomes especially interesting when clocks are fluctuating or are in superposition relative to one another. This leads to striking temporal non-locality effects and clock synchronizations that depend on the choice of temporal frame.

A particularly challenging topic for relational quantum dynamics is non-integrability or more drastically chaos. On account of the complex dynamics there are great difficulties in constructing objects that encode some set of degrees of freedom evolves relative to another set, chosen as the temporal reference system. This becomes particularly hard in the quantum theory. Nevertheless, as we have shown, one can come up with a consistent quantum description, provided one adapts the method of quantization to the algebra of relational observables. This will generally change the topology underlying the quantization procedure, however, is well motivated as quantization is about finding a consistent quantum representation of observables.