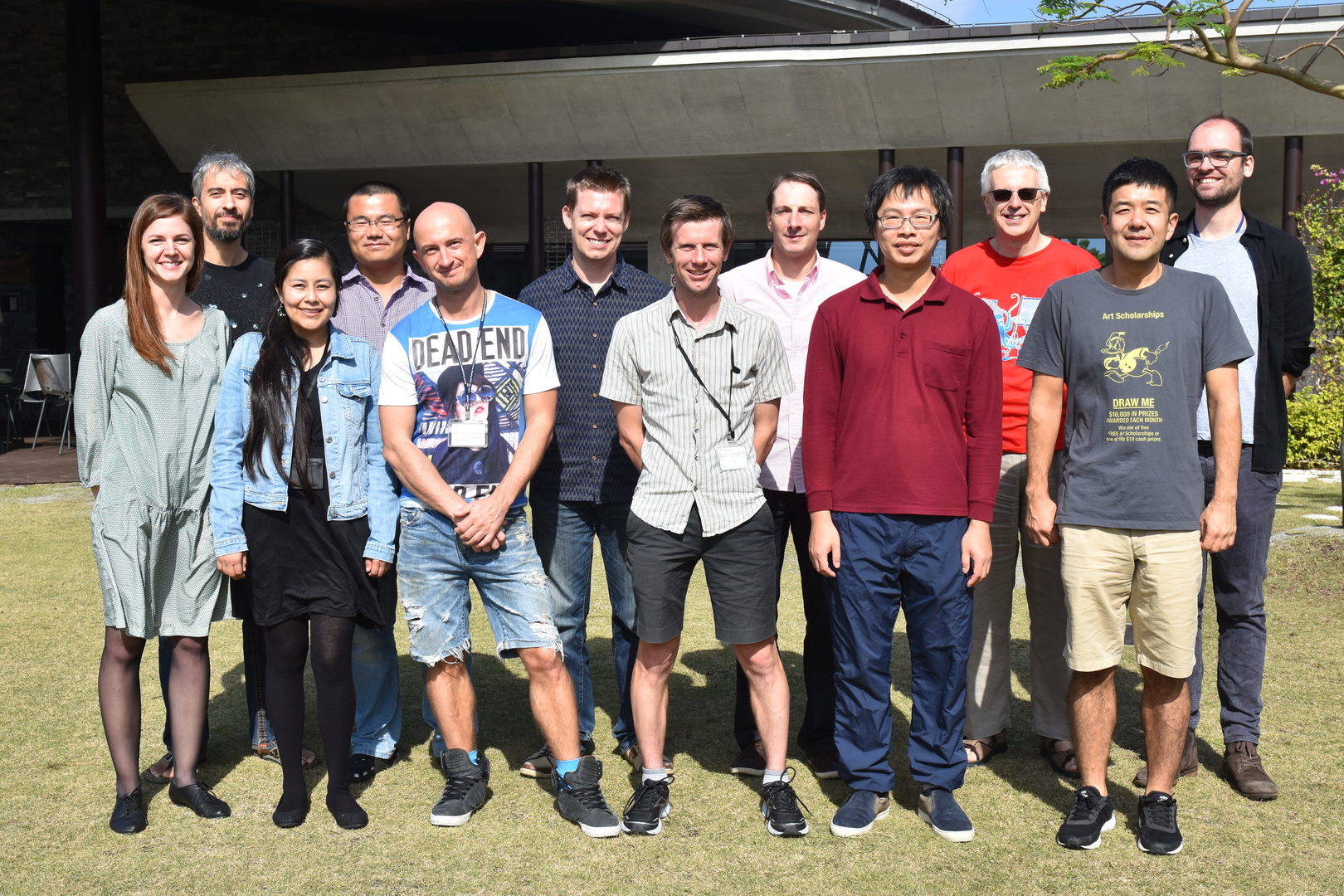 The Inhomogeneous SSA (ISSA) used in STEPS is perfectly accurate but also quite slow, especially for large systems. This became a real bottleneck for our research, for example simulations of stochastic calcium spikes  took more than 3 weeks to compute and this was for only a section representing about 15% of the dendritic tree (Anwar et al, 2013).  A solution would be to parallelize the software so that it can be run on multiple cores at the same time but we had to develop a method to do this efficiently. The standard ISSA cannot be parallelized effectively because diffusion events tend to dominate the simulation and this causes a large amount of  communication to handle diffusion events between tetrahedrons running on different cores. 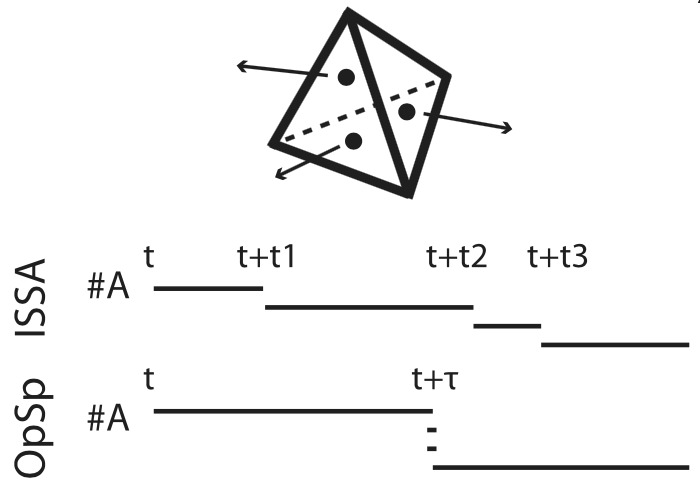 Figure 1: in the ISSA diffusion events can happen at any time, in the Operator Split they are all aligned at a time step τ (from Hepburn, Chen & De Schutter, 2016). Chemical events still occur at any time (not shown).

The solution to this problem is an Operator Split approach, where the chemical reactions run according to the standard SSA but diffusion events are executed only at specific time steps, allowing for buffered communication (Figure 1). We systematically investigated the existing literature on stochastic reaction-diffusion operator splitting, but most of this applied to regular meshes and some approaches suffered from poor accuracy (Hepburn, Chen & De Schutter, 2016). We therefore developed a new operator splitting implementation for irregular meshes that enhances accuracy with minimal performance cost (Hepburn, Chen & De Schutter, 2016). The method requires a global value τ that can be computed before the simulation starts and allows for multiple reaction and diffusion events in a single time step.

Using this Operator Split approac  we developed an initial MPI-based, parallel implementation of STEPS without E-Field (Chen and De Schutter 2017) as shown in Figure 2. 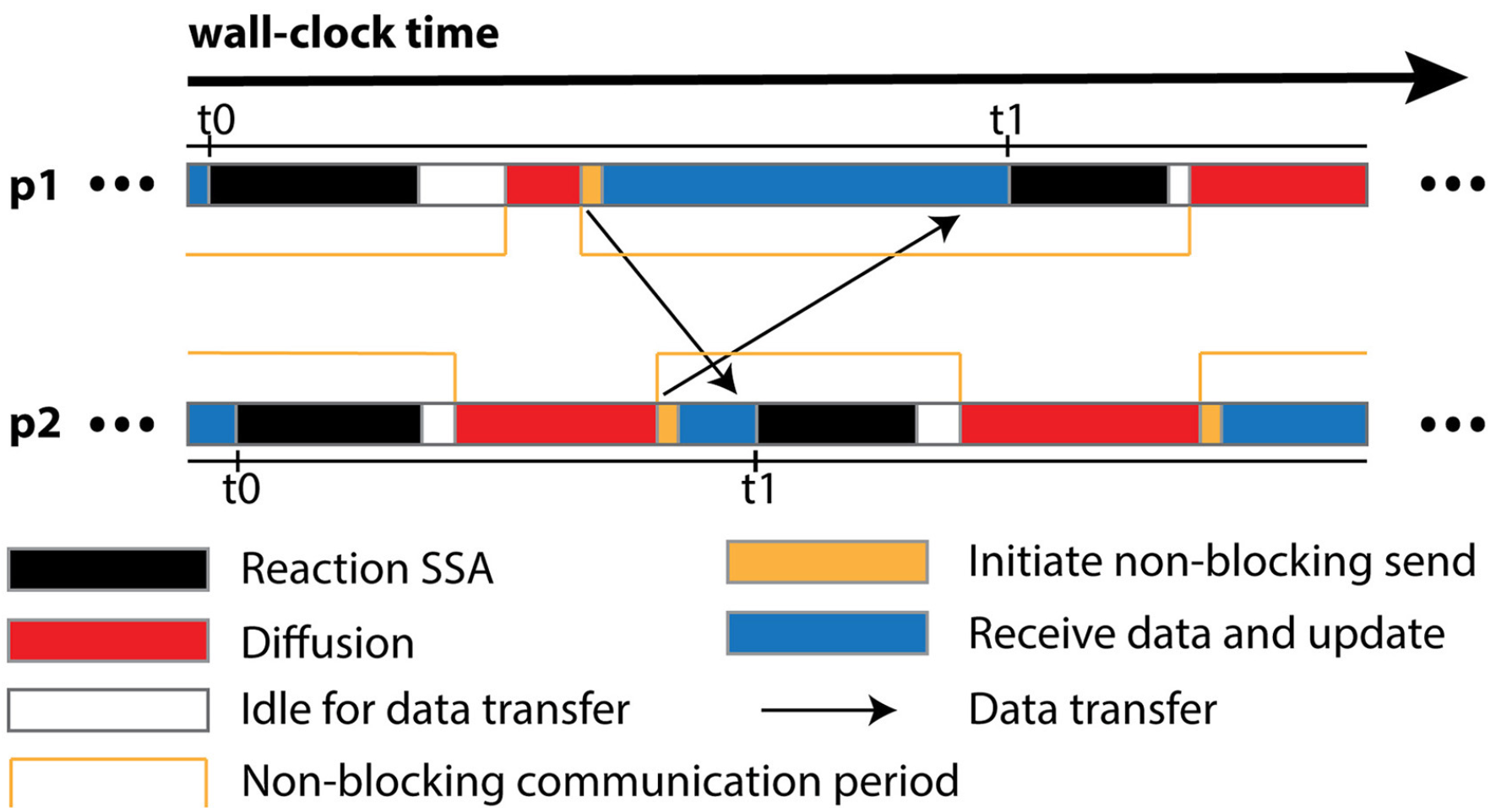 Figure 2: Operator Split method leads to more effective communication of diffusion events between two processes p1 and p2 in a parallel solution. Note that the reaction SSA continues in process 2 while it is still communicating (from Chen and De Schutter, 2017). 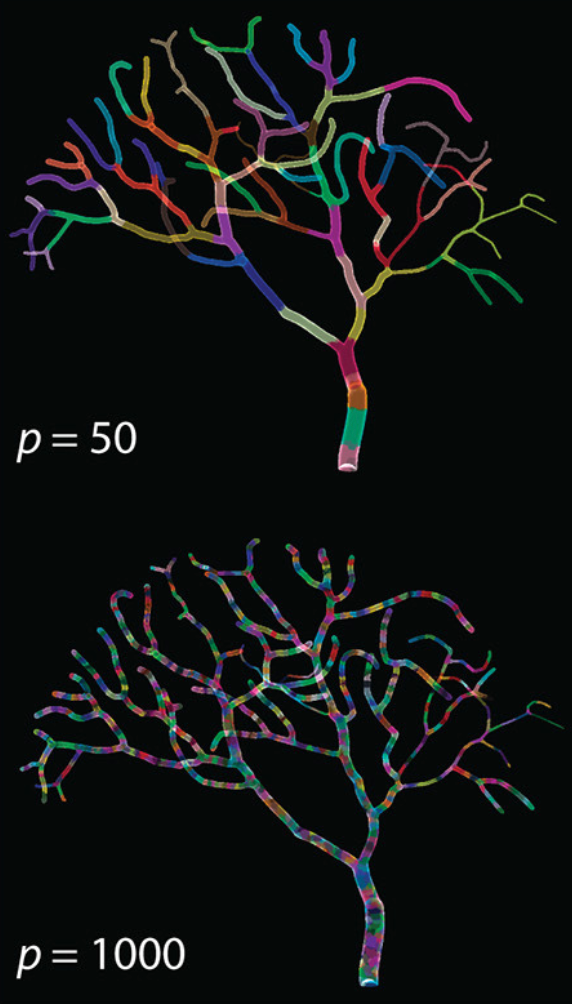 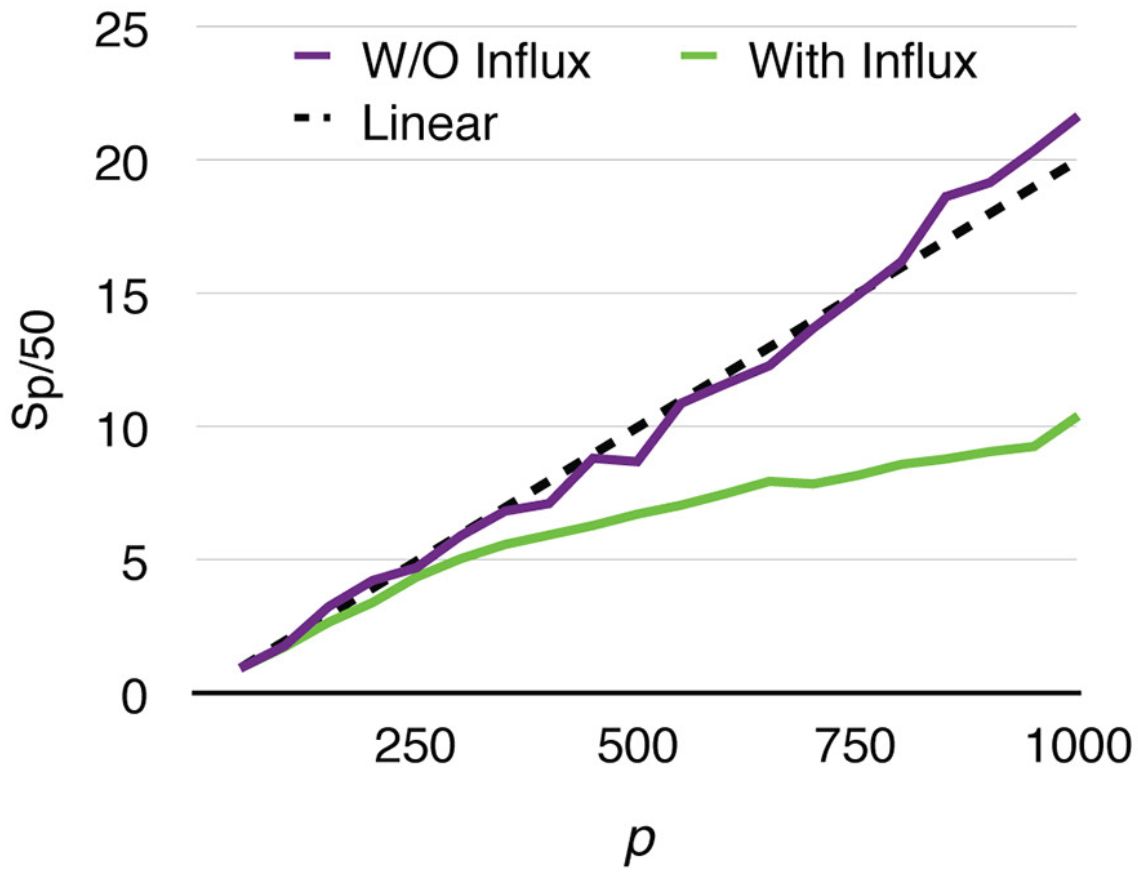 Figure 3: Left: partioning of part of a Purkinje cell dendrite for the number of processes indicated. Top: scaling relative to the simulation run on 50 processes of two different calcium dynamics implementations, one with buffered calcium without gradients and one where calcium influx is provided from stored simulations (Anwar et al. 2013). No parallel E-Field was available and therefore no ion channels were included in the simulations (from Chen and De Schutter, 2017).

Improved model of stochastic cerebellar LTD induction
Models should evolve as new experimental data becomes available. When we developed the Antunes and De Schutter (2012) model it was unclear how PKC contributed to activation of Raf, the first step in activation of the ERK-based positive feedback loop. Therefore a placeholder molecule ‘Raf-activator’ was used in this model. Subsequently, Yamamoto et al. (2012) showed that the actual mechanism occurs through Raf Kinase Inhibitory Protein (RKIP). RKIP binds to Raf and inactivates it, phosphorylation of RKIP by PKC causes the complex to dissociate and releases active Raf. To model this interaction we borrowed from a previous model of RKIP activation (Figure 4). 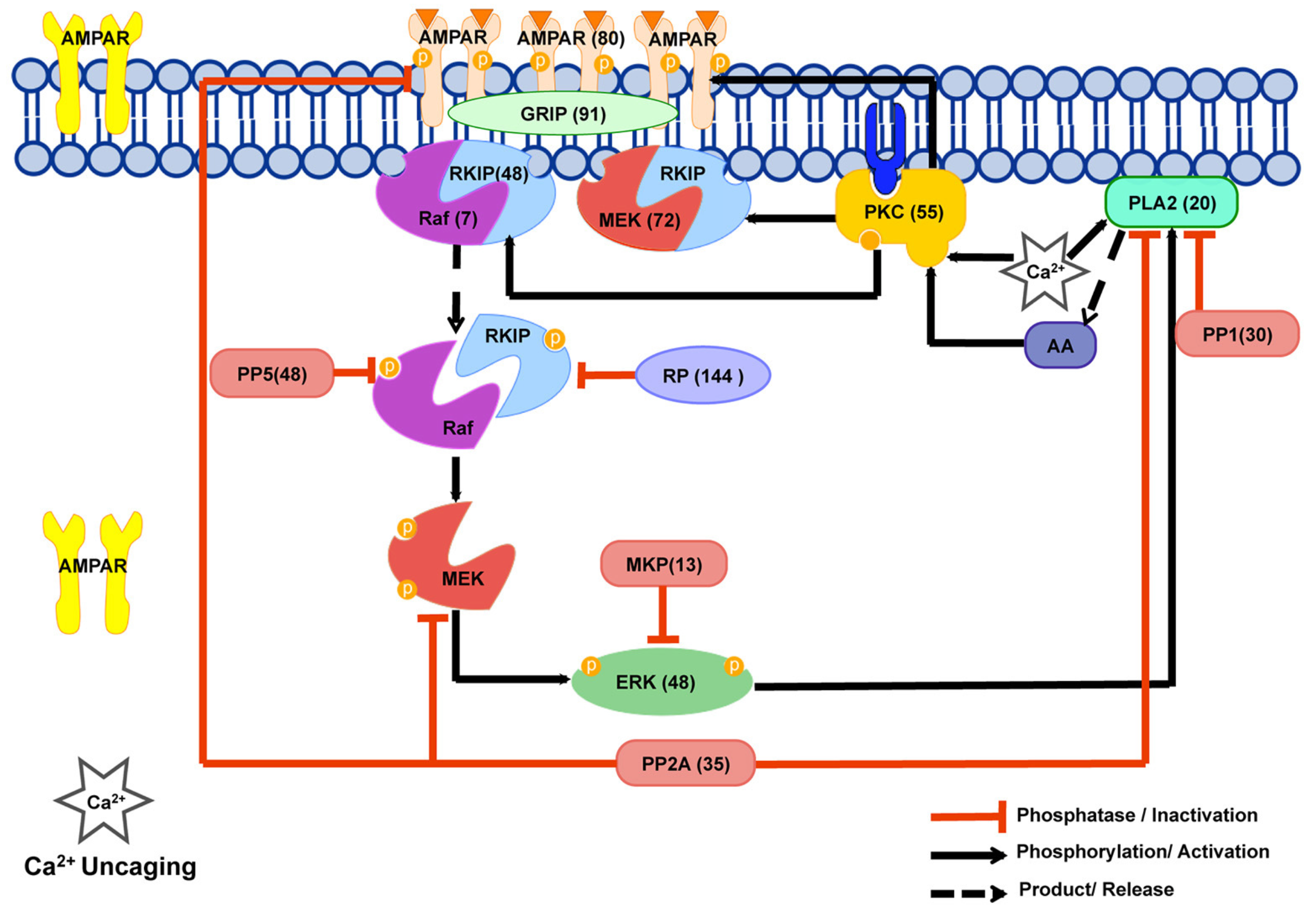 An unresolved matter was an additional interaction of RKIP with Mitogen-activated protein kinase kinase (MEK), the kinase activated by Raf that activates ERK. It is known that RKIP also binds to and inhibits MEK, but while the RKIP-MEK interaction had been confirmed in Purkinje cells (Yamamoto et al. 2012) it was unclear whether this could block LTD induction. We therefore contacted Dr. K. Yamamoto (Korea Institute of Science and Technology) and she agreed to perform blocking experiments that confirmed that dissociation of the RKIP-MEK complex is required for LTD induction, as reported in our joint publication (Hepburn et al. 2017).
Several additional improvements were made in the model (Figure 4, Hepburn et al. 2017). The calcium profile caused by calcium uncaging was modeled more accurately, allowing for a better match with the data reported in Tanaka et al (2007). We also improved the phosphorylation of AMPAR by PKC, this resulted in a more robust model that fluctuates less than the one reported in Antunes and De Schutter 2012. 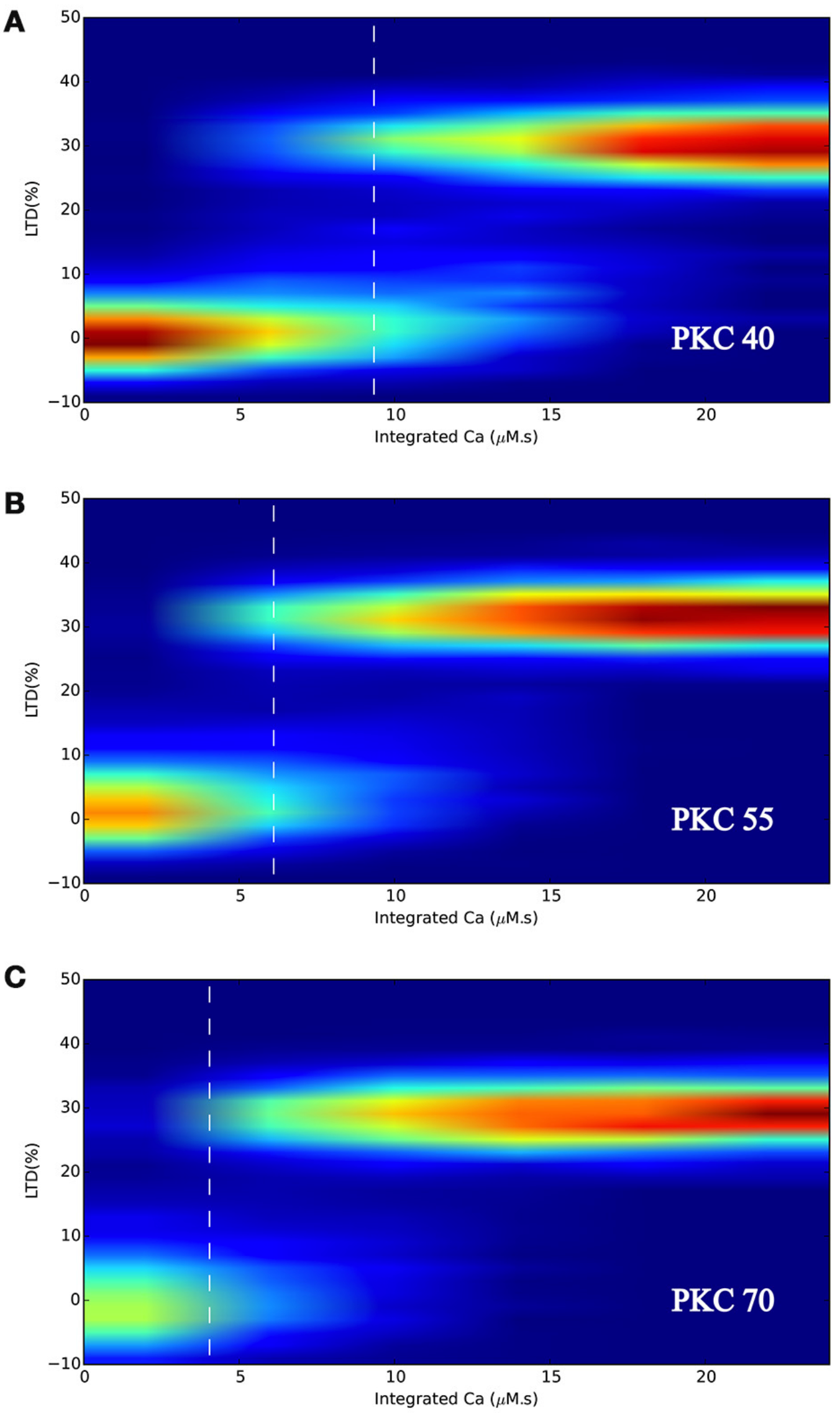 Finally, in preparation of future spatial models, we explored the stochastic variability of the number of PKC molecules in the cytosol of a spine due to diffusion. For a mean of 55 PKC molecules (Figure 4), the predicted range is 40 to 70 molecules. Such changes are sufficient to shift the probabilistic calcium threshold for LTD induction by a factor of two (Figure 5). Therefore, diffusional mobility of key enzymes is an extra source of stochasticity in this system.

The observation that PC simple spike trains in vivo consist of periods of regular firing interrupted by pauses has been suggested to represent a mixture of rate code (regular firing) with a temporal code (pauses). This would be an example of multiplexed coding, but the rodent data on which this hypothesis was based did not allow for behavioral correlation. Therefore, we explored whether we could confirm the multiplexed coding hypothesis in monkey data, which we obtained in a collaboration with Dr. Peter Thier (University of Tübingen, Germany).

We analyzed spike trains and local field potentials (LFPs) from 34 Purkinje cells obtained in three awake rhesus monkeys during spontaneous and visually guided saccades (Hong et al. 2016). We used an ISI asymmetry index (AI) instead of the CV2 because it distinguishes pause initiating from pause terminating spikes (Figure 6).  We confirmed that in all these PCs the spike trains could be described as a combination of prolonged periods of regular fast firing, occasionally interrupted by pauses (Figure 6), though the distinction was less sharp than in rodents.

We discovered that pause related spikes modulated differently with the LFP, this was shown by analyzing the Spike Triggered Average (STA) of the LFP. Pause-initiating and pause-terminating spikes showed strong phase-coupling to the LFP (Figure 7A), specifically to its β/γ band (Figure 7C), while regular spikes modulated only weakly with the LFP. This suggests that pause spikes are more strongly and more precisely coupled to network activity than regular spikes, but this fact would go unnoticed if the temporal structure of the spike train is ignored when computing the STALFP (Figure 7B), because pauses are relatively rare events. 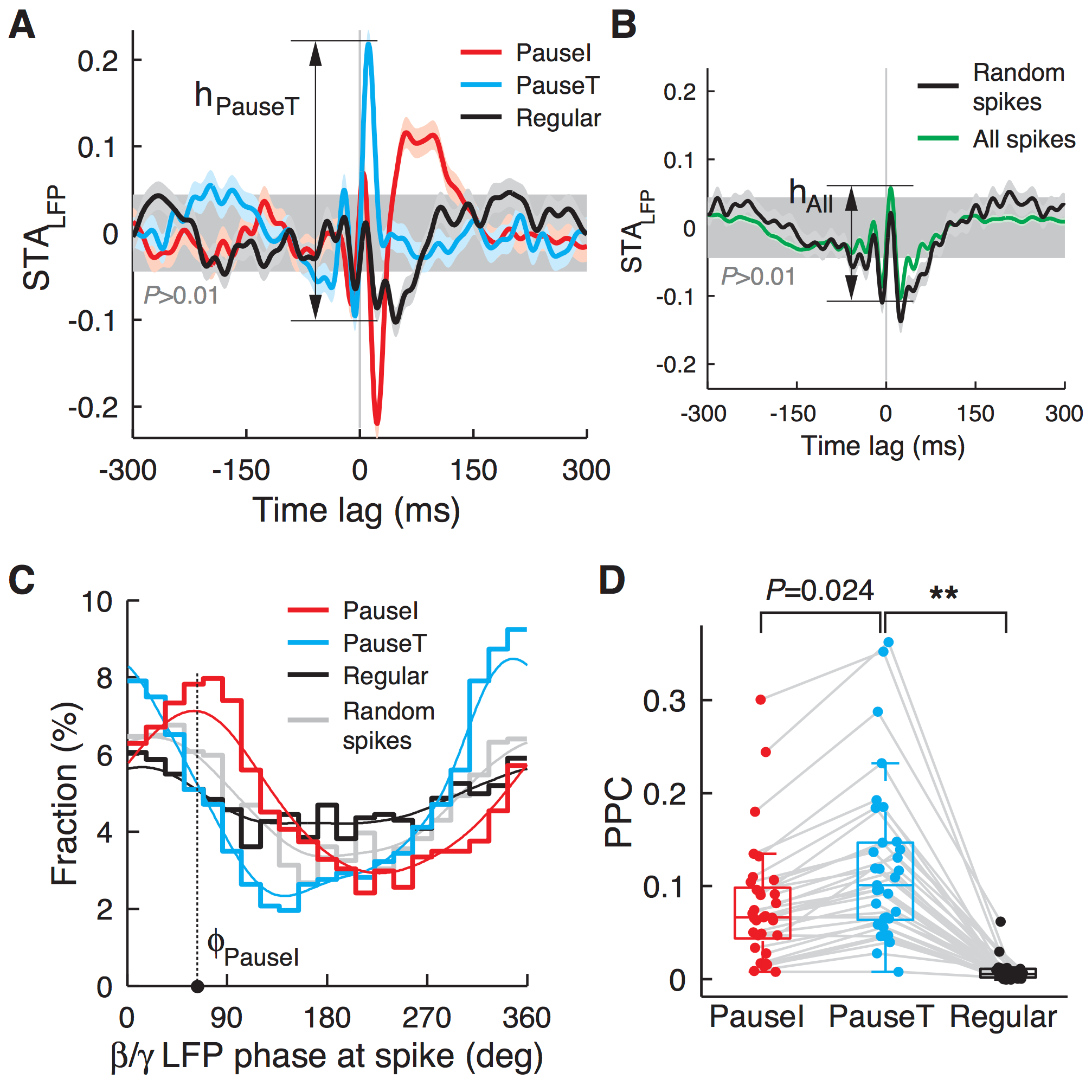 Figure 32: pause and regular spikes correlate differently with the LFP. A: STALFP of the different types of spikes. Gray region is the 99% confidence interval. B: STALFP of randomly selected spikes (black) and all spikes (green). Data are mean ± SEM. C: Phase distribution of the β/γ LFP at the pause, regular, and randomly selected spikes (thick: histogram, thin: kernel-estimated density). D: Pair phase consistency for each spike category (adapted from Hong et al. 2016).

If pause spikes in single PCs are related to specific patterns of network activity, what information do they jointly encode about eye motion? In many of PCs, the β/γ LFP was significantly coherent across all saccades, with a phase locking to saccade onsets (Figure 8A,B). This predicted that pause spikes, which are phase-locked to the β/γ LFP, should reliably code eye movement timing. The most significant pattern was that pause-initiating spikes encode saccade onsets with a significant and sharp increase in average firing, caused by an increase in spike coincidence (colored regions in Figure 8C). Spike reliability was significantly higher for pause spikes (Figure 8D), further emphasizing their role in encoding the onset of eye motion. Finally, the LFP phase and spike reliability were much more steeply related to each other for pause-initiating spikes than for regular spikes (Figure 8E). This demonstrates that the fidelity of temporal coding by pauses in individual PCs crucially reflects the reliability of activity and coding of the local network. 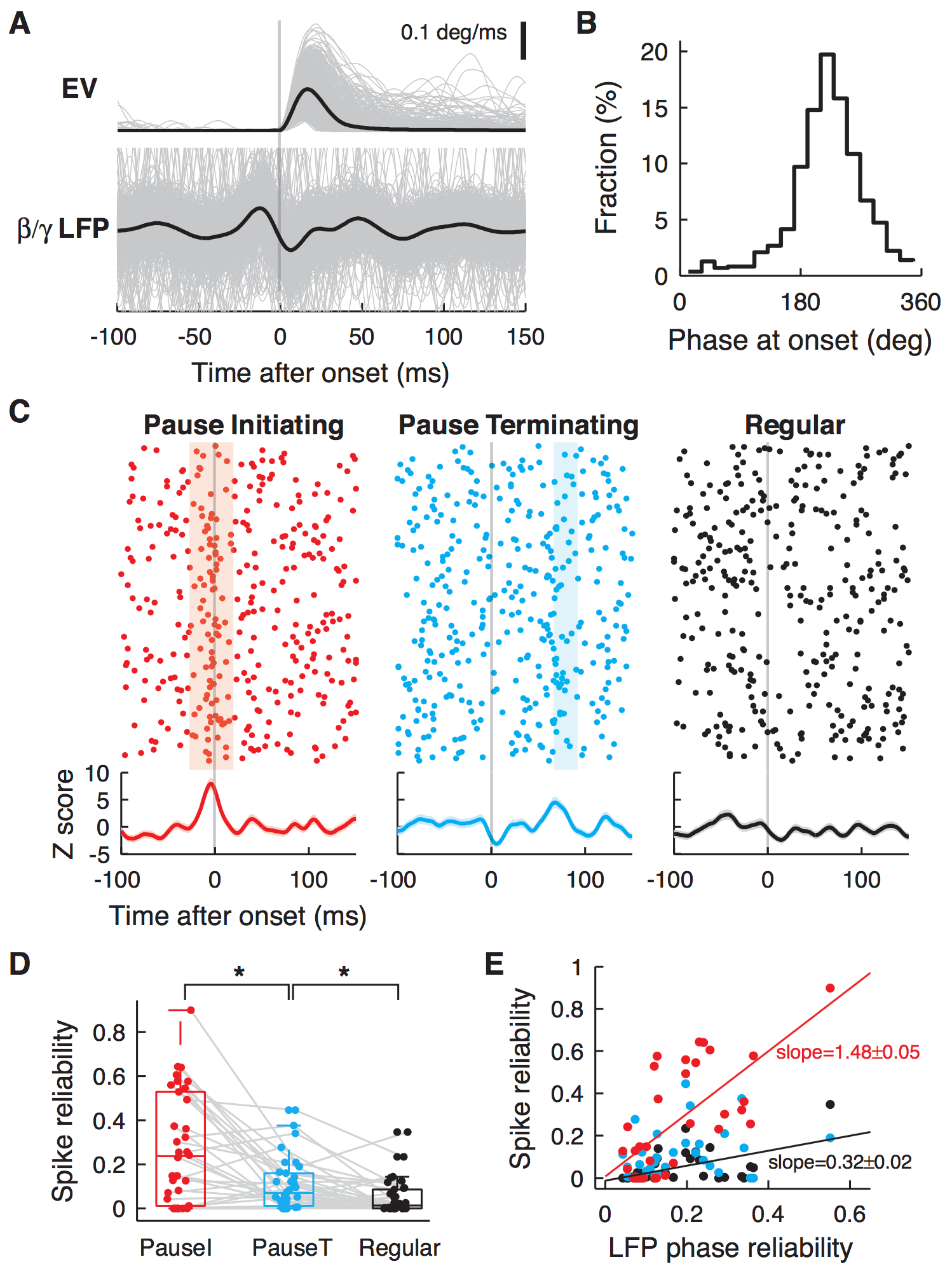 So far we have focused on pause spikes, rare events in the spike train. On the other hand, the eye velocity-spike correlation observed in the data suggests that a firing rate code may also be present in PC spike trains. To answer this question, we constructed an inverse model that predicts firing rate from eye movements in each cell, based on the linear-nonlinear model framework. We found that the linear rate prediction followed the actual rate very closely. Importantly, correlation with the firing rate remained high when we computed the linear prediction with only regular spikes, which comprised about 20% of all spikes (Figure 9A). Conversely, the firing rate of pause spikes did not modulate as linearly or steeply as for regular spikes. This suggests that information encoded by the whole firing rate is very different from eye movement features related to pause spikes such as onsets (Figure 8C), but this information can be captured well by a subset of the full spike train, regular spikes (Figure 9B-C).

Figure 9: PC firing rate linearly encodes motion kinematics as predicted by a linear model. A: predicted vs. measured firing rate for all (green), regular (black), and pause (red) spikes. The rates of pause and regular spikes are rescaled to match those of all spikes to compensate for subsampling. The dotted line represents equality. B: goodness of fit R2 for the linear prediction to actual rate. C: R2 for all cells (adapted from Hong et al. 2016).

The conclusion of our study is that PC spike trains can simultaneously convey information necessary to achieve precision in timing, as a temporal code linked to pauses in firing, and in continuous control of motion, as a rate code formed by regular spiking.