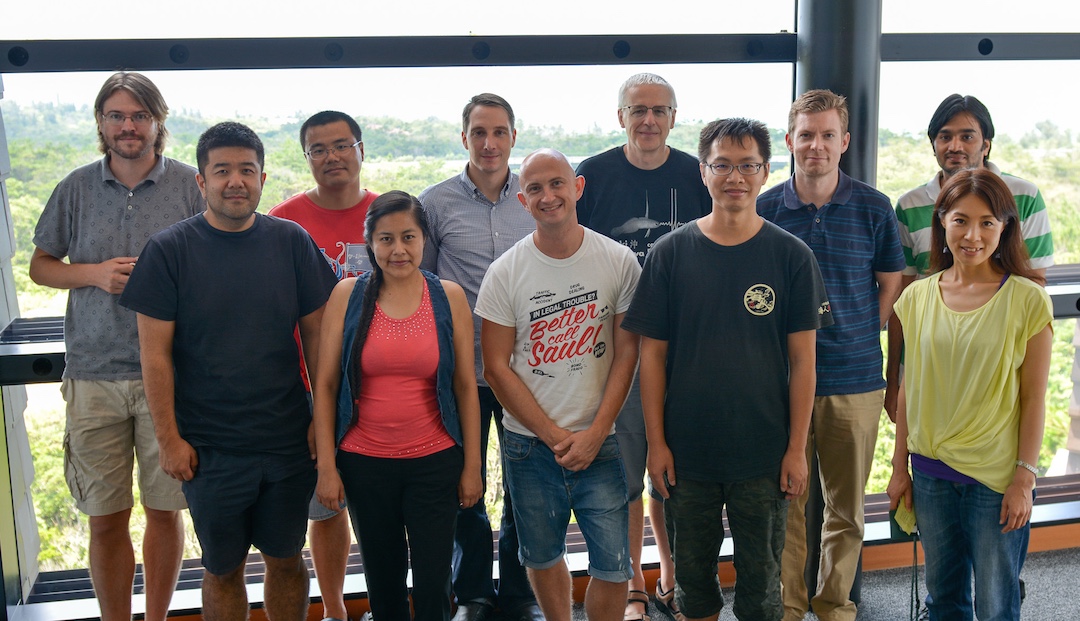 In their seminal works on squid giant axons, Hodgkin, and Huxley approximated the membrane leak current as Ohmic, i.e., linear, since in their preparation, sub-threshold current rectification due to the influence of ionic concentration is negligible. Most studies on mammalian neurons have made the same, largely untested, assumption. Using simulation methods we have shown that the membrane time constant and input resistance of mammalian neurons (when other major voltage-sensitive and ligand-gated ionic currents are discounted) varies non-linearly with membrane voltage, following the prediction of a Goldman-Hodgkin-Katz (GHK) based passive membrane model (Huang et al., 2015). The model predicts that under such conditions, the time constant/input resistance-voltage relationship will linearize if the concentration differences across the cell membrane are reduced. These predictions were confirmed in patch-clamp recordings of cerebellar Purkinje neurons (in the presence of pharmacological blockers of other background ionic currents) and were more prominent in the sub-threshold region of the membrane potential.

Figure 1: A. Comparison between voltage responses of a passive Ohmic model (blue traces) and a GHK model (orange traces) to to +15 pA (solid lines) and −15 pA (inversed and superimposed, dotted lines) current injections for 2 seconds, at three different holding currents (causing different holding membrane potentials). Note identical responses for the Ohmic model but different sized responses for the GHK model, nevertheless responses to positive and negative currents overlap for both conditions. B. Similar protocol in a Purkinje cell in slice, with all major ionic currents blocked, shows also different sized responses for each holding potential (−74, −67, and −63 mV for bottom to top)

Figure 2: temporal summation of excitatory post-synaptic potentials in an Ohmic model (blue) and a GHK model (orange). Solid and dotted lines represent summation in the presence and absence of Ih respectively. The maximal conductance of Ih used in this simulation is identical to GLeak of the GHK leak current.Content

Model simulations showed that the non-linear leak affects voltage-clamp recordings. The amplitude and rates of transient and steady state voltage properties of the mammalian voltage-gated potassium current Kv4 differed substantially between the Ohmic and GHK model simulations. The underlying cause of this difference was the large K+ gradient in combination with the greater K+ permeability relative to that of Cl−. In contrast, in the squid axon, the K+ gradient is less steep and more importantly, the permeability ratio of K+/Cl− is less than 1, therefore there is little difference between the Ohmic and GHK squid axon models. The non-linear leak also reduces temporal summation of excitatory synaptic input significantly (Figure 2).

Together, our results demonstrate the importance of trans-membrane ionic concentration in defining the functional properties of the passive membrane in mammalian neurons as well as other excitable cells. 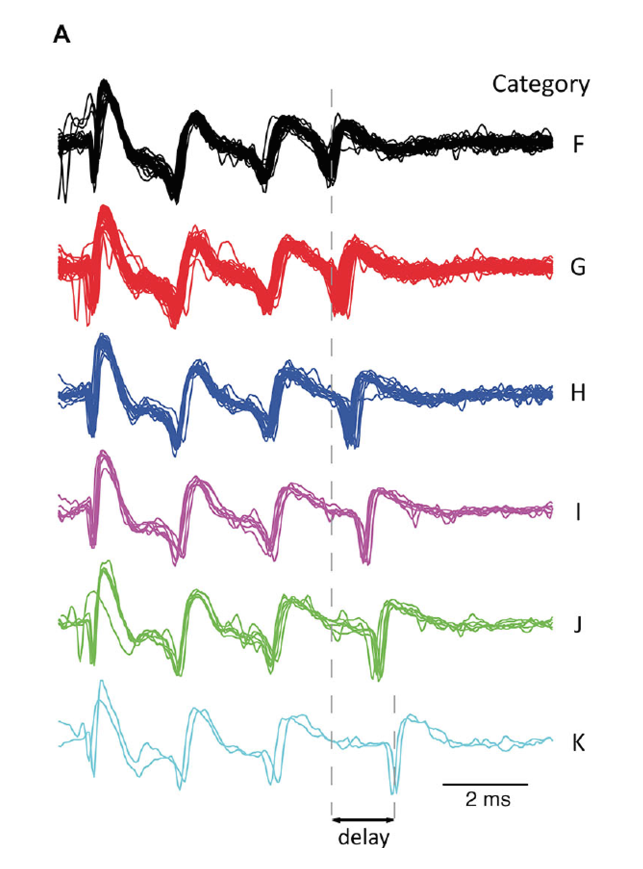 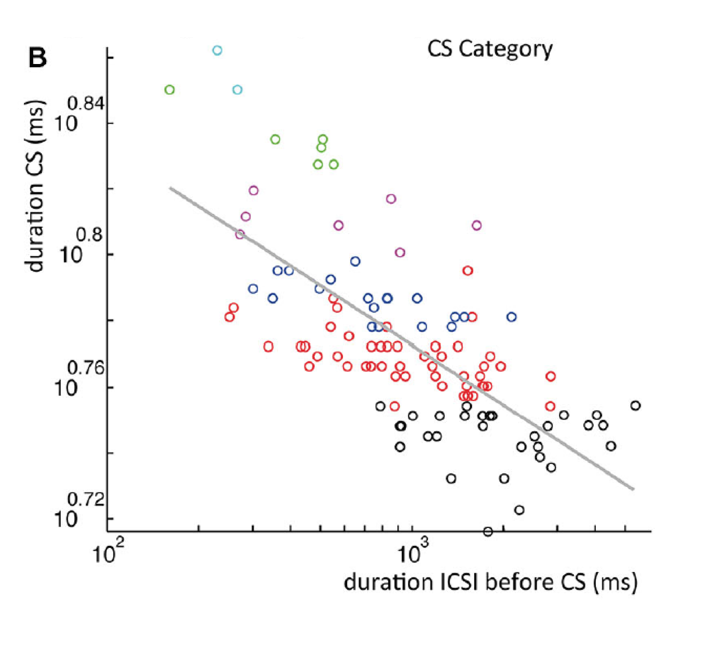 Figure 4: A. All complex spike waveforms that differed only in delay of last spikelet from a single recording. B. Scatterplot of the complex spike duration (time between first and last spikelet) versus interval with preceding complex spike in a log-log plot. Gray line is a power-function fit (power = −0.026) to the data with R2 = 0.49 (p < 0.001). Colors used indicate categories.

A similar phenomenon was observed in rat Purkinje cells recorded in vitro upon repeated extracellular stimulation of climbing fibers at different frequencies in slice experiments. All together these results strongly suggest that the variability in the timing of the last spikelet is due to complex spike frequency dependent changes in Purkinje cell excitability.

Information processing in the olivocerebellar system

Neurons of the cerebellar nuclei convey the final output of the cerebellum to their targets in various parts of the brain. Within the cerebellum their direct upstream connections originate from inhibitory Purkinje cells. The simple firing pattern of Purkinje cells consists of periods of regular fast spiking interrupted by intermittent pauses of variable length and the pauses can be synchronized among Purkinje cells while the regular spikes are not. How can the cerebellar nucleus process this complex input pattern? In a modeling study, we investigated different forms of Purkinje cell simple spike pause synchrony and its influence on candidate coding strategies in the cerebellar nuclei (Sudhakar et al., 2015). That is, we investigated how different alignments of synchronous pauses in synthetic Purkinje neuron spike trains affect either time-locking or rate-changes in the downstream nuclei.

Figure 5: In all panels red color stands for pause beginning condition, blue for pause overlapping condition. Error bars are represented by shaded region. A. Population spike timing histogram of all Purkinje cells projecting onto the cerebellar nucleus neuron model. One can notice synchronous pause of 20 ms for both types of synchronization. B. Mean and standard deviation of increase in firing rate of cerebellar nucleus neuron quantified for both conditions and for low input gain. C. Same for medium input gain. D. Same for high input gain. (*) represents comparisons  that are significant (p<0.05) and (^) represents insignificant comparisons (p> = 0.05).

We also characterized the effect of pause length and spike jitter on the nuclear neuron firing. Finally, we demonstrate that the rate of rebound responses in nuclear neurons after a synchronous pause is controlled by the preceding firing rate of its afferent Purkinje cells.

GABA-mediated repulsive coupling between circadian clock neurons in the SCN

The mammalian suprachiasmatic nucleus (SCN) forms not only the master circadian clock but also a seasonal clock. This neural network of ∼10,000 circadian oscillators encodes season-dependent day-length changes through a largely unknown mechanism. We show that region-intrinsic changes in the suprachiasmatic nucleus fine-tune the degree of network synchrony and reorganize the phase relationship among circadian oscillators to represent day length (Myung et al., 2015). Our collaborators measured oscillations of the clock gene Bmal1, at single-cell and regional levels in cultured suprachiasmatic nuclei explanted from animals raised under short or long days. We estimated coupling between ventral and dorsal SCN using the Kuramoto framework showing that the data best matched a network that has couplings that can be both phase-attractive (synchronizing) and -repulsive (desynchronizing) (Figure 7).

Figure 7: Dynamics of suprachiasmatic nucleus oscillators imply asymmetrically distributed repulsive and attractive phase couplings. A. The phase-model–based estimation of coupling finds a network motif of phase-repulsive coupling (blue) from V- to D-SCN and phase-attractive coupling (red) from D- to V-SCN in the cross-sample mean (SEM ≤0.002, n = 6 12:12 SCNs). B. Surrogate models under various coupling schemes show that partial synchronization emerges under the asymmetric attractive (+)–repulsive (−) coupling motif (marked with ##) found in A, whereas a randomly distributed, structureless (marked with #) 50:50 mixture of attractive and repulsive couplings caused desynchronization  (**P < 0.001, Student’s t test for triplicates).

The phase gap between the dorsal and ventral regions increases and the overall period of the SCN shortens with longer day length and the network model replicated these findings (Figure 8D). 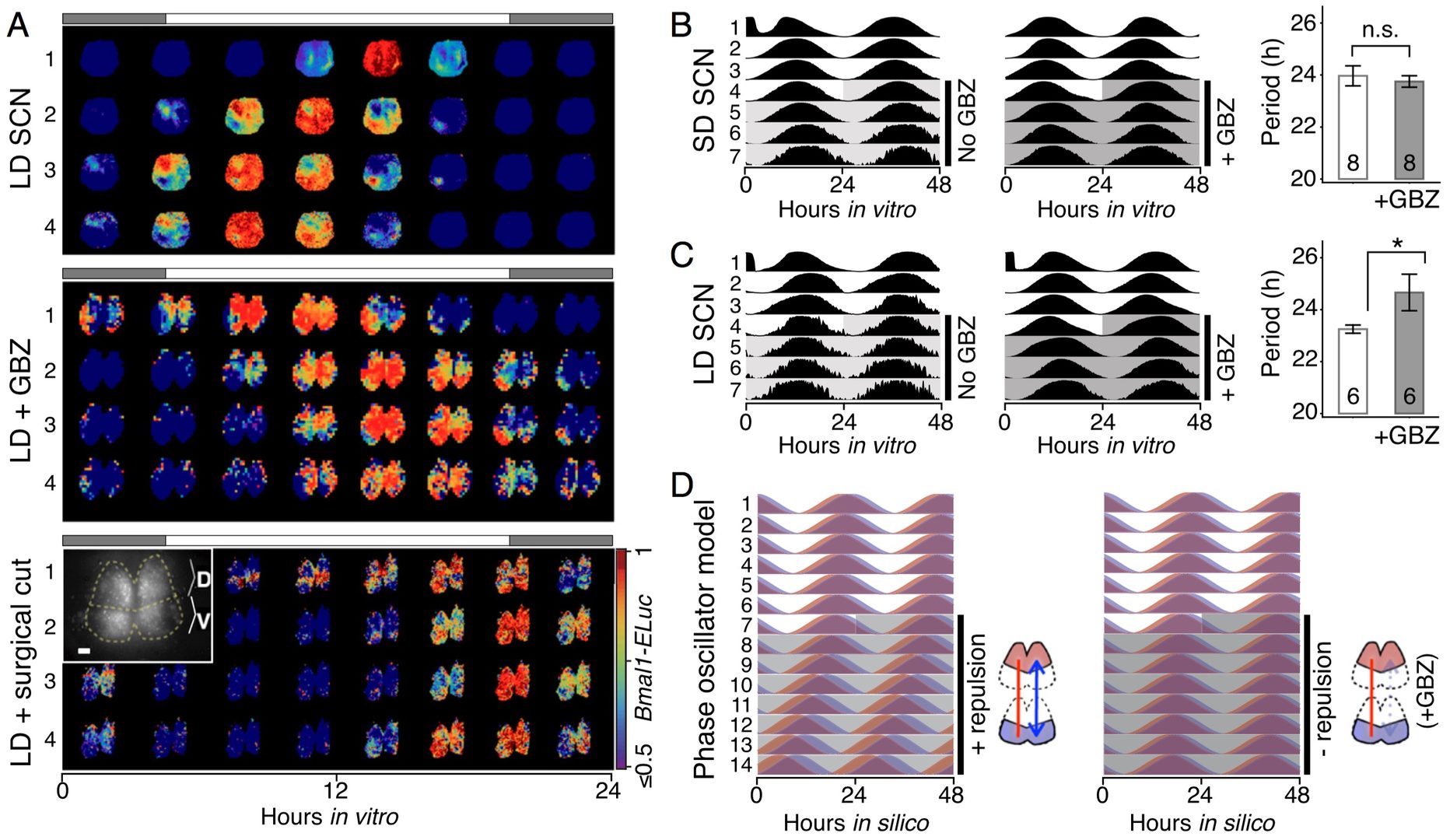 Figure 8: GABAA inhibition disturbs the phase and period organization caused by long or short day length. A. Time-lapse images of normalized Bmal1-ELuc oscillations in the LD-entrained SCNs are shown for every 3 h, color-coded to indicate the peak expression with dark red and lower-than-50% expression with dark blue (color bar on the bottom right). The clear D-V cluster formation and the short oscillation period can be seen in the control LD-entrained SCN (Upper). Application of the GABAA blocker gabazine (GBZ) lengthens the free-running period in culture while making the cluster separation less clear (Middle). Similarly, physical separation by a surgical cut (Inset) lengthens the free-running period in the LD SCN (Lower). (Scale bar, 100 μm.) B. and C. The effect on the free-running period is observed consistently in a larger number of samples through whole-field luminometry using a photomultiplier tube. GBZ has no effect on the SD SCN culture B but in the LD SCN culture C GBZ increases the period (*P < 0.05, Student’s t test; n indicated in the bar graph). D. The asymmetric repulsive coupling model can explain the phase and period organization under LD entrainment. With increased repulsive coupling in the D-SCN, the phase gap between D- and V- SCNs increases and the free-running period becomes shorter, as seen in the LD SCN. The light or dark shade indicates the region of vehicle or drug application.

One of the underlying physiological mechanisms is the modulation of the intracellular chloride concentration, which can adjust the strength and polarity of the ionotropic GABAA-mediated synaptic input. Increasing day-length changes the pattern of chloride transporter expression, yielding more excitatory GABA synaptic input, and that blocking GABAA signaling or the chloride transporter disrupts the unique phase and period organization induced by the day length. These results indicate that the network encoding of seasonal time is controlled by modulation of intracellular chloride, which determines the phase relationship among and period difference between the dorsal and ventral suprachiasmatic nucleus.

Title : Understanding how the brain does motor control