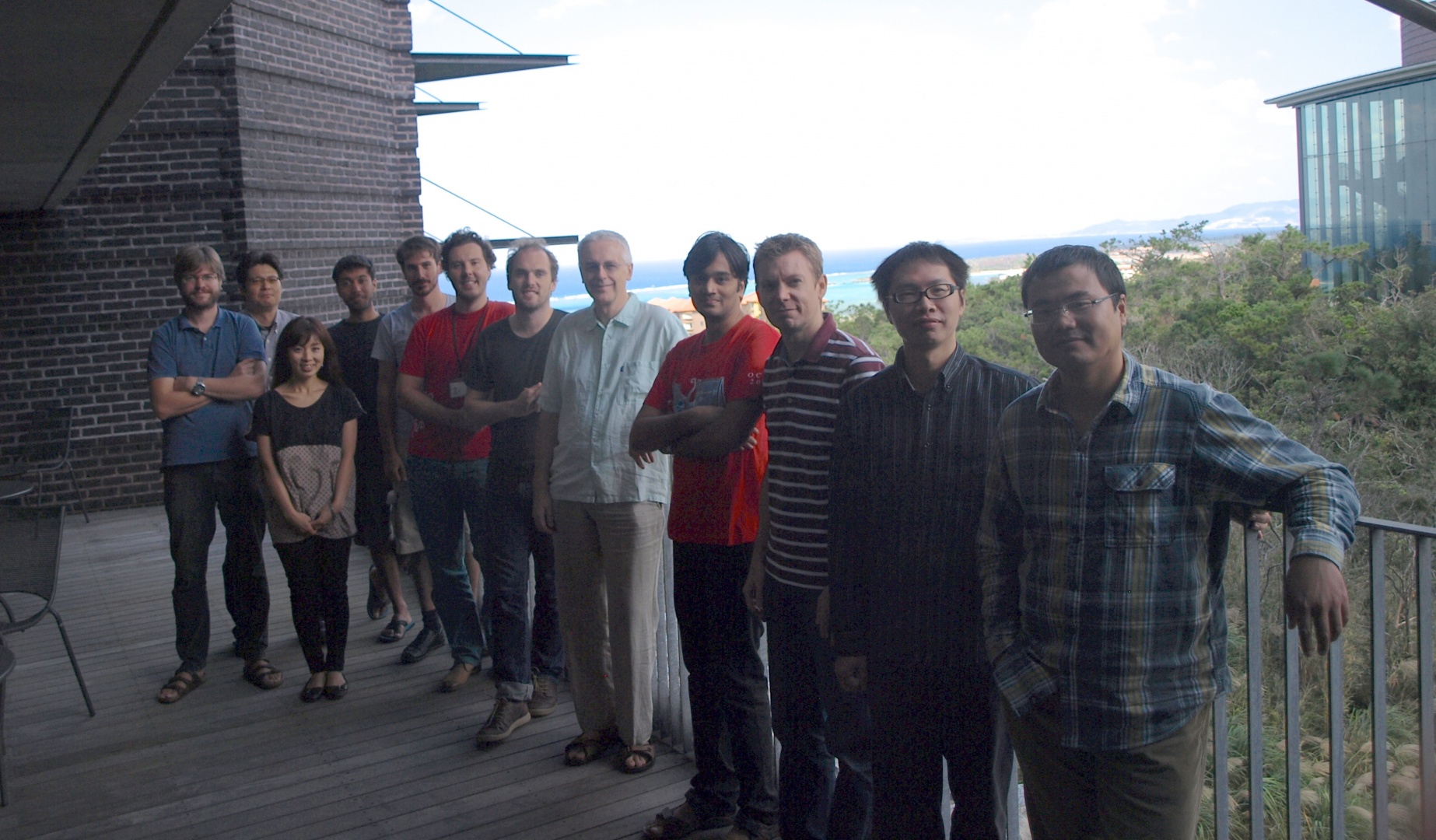 Analysis of neural morphologies
We designed and implemented BTMORPH, a Python library to efficiently represent and analyze neuronal morphologies (Torben-Nielsen, 2014). The rationale of this library is to provide a solid, well tested backbone in the form of a data structure and atomic morphometric functions that allow users to analyze morphologies in a flexible way. Neuronal morphologies are treated as tree structures and all provided morphometrics can be computed on any (sub)tree structure. As such, morphometrics can be performed on the whole structure (as is usually done) or on any subtree; subtrees can be trees made up by a specific neurite type (axon, apical dendrite, ...) or can be selected specifically by, for instance, centrifugal order.
The target audience of BTMORPH consists of researchers who can read and modify Python scripts. However, we also provide straightforward wrappers around the code to perform essential functionality such as analyzing multi- dimensional (e.g., conditional) data in single neurons or to record population statistics. A typical example of using BTMORPH is shown in Fig. 1. 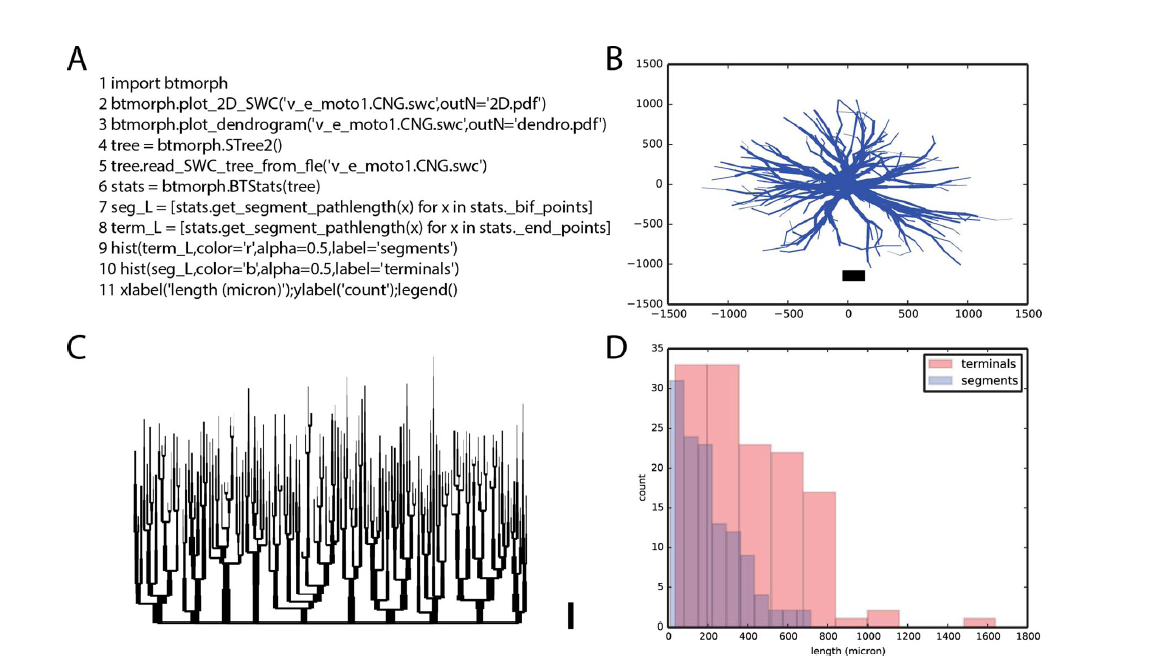 Figure 1: Exemplar use of BTMORPH A. Code snippet (line numbers added for clarity). B-D Results of executing the code snippet. B. line 2 (of the snippet) generates a 2D rendering of the morphology and save the file as PDF. C. line 3 generates a dendrogram of the same morphology. D. execution of lines 4–11 load a morphology into the provided datastructure (STree2) and computes and visualizes the segment length statistics of this neuron

Software for modeling growth of dendrites and axons
Neuronal morphologies are essential for brain function: physical overlap between dendrites and axons constrain the circuit topology, and the precise shape and composition of dendrites determine the integration of inputs to produce an output signal. At the same time, morphologies are highly diverse and variant. The variance, presumably, originates from neurons developing in a densely packed brain substrate where they interact (e.g., repulsion or attraction) with other actors in this substrate. However, when studying neurons their context is never part of the analysis and they are treated as if they existed in isolation. To fully understand neuronal morphology and its variance it is important to consider neurons in relation to each other and to other actors in the surrounding brain substrate, i.e., their context.
We developed a context-aware computational framework, NeuroMaC, in which large numbers of neurons can be grown simultaneously according to growth rules expressed in terms of interactions between the developing neuron and the surrounding brain substrate (Torben-Nielsen & De Schutter, 2014). NeuroMaC can generate accurate virtual morphologies of distinct classes both in isolation and as part of neuronal forests. Accuracy is validated against population statistics of experimentally reconstructed morphologies. We showed that context-aware generation of neurons can explain characteristics of variation. Indeed, plausible variation is an inherent property of the morphologies generated by context-aware rules (Fig. 2). 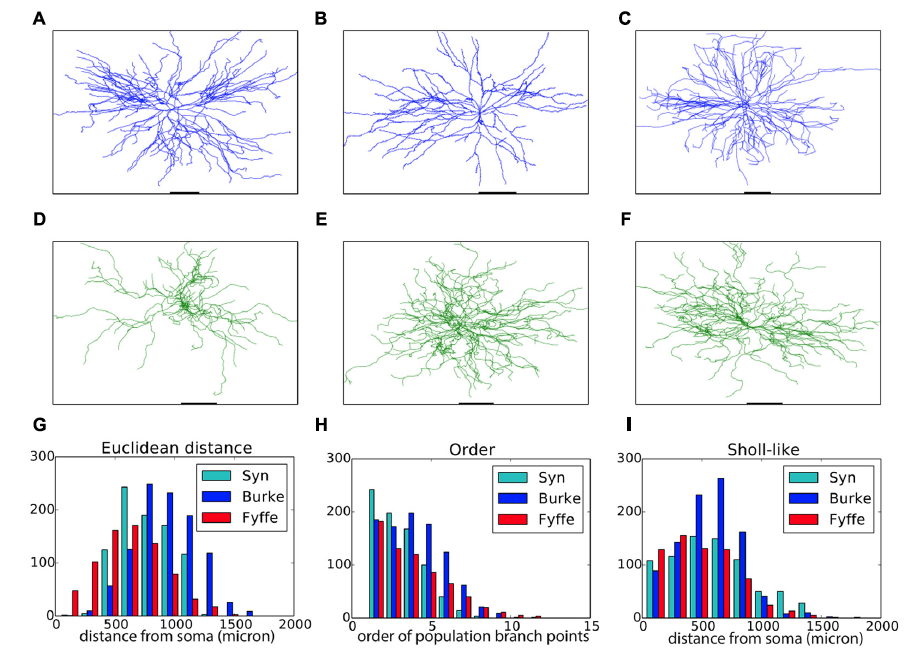 A demonstration of the effect of context on neural development is given in Fig. 3 which shows the generation of layer 5 pyramidal neuron morphologies. Three exemplar morphologies are shown in Fig. 3A. We can observe morphological traits such as a difference in “height” between the cells but these traits are hard to relate to their context. However, from canonical circuit information, we know that the somas are located in layer 5 (L5), that their basal dendrites remain mainly in L5 and may extend a bit into layer 4, that their apical dendrite extends to the superficial parts and ends close to the pia (in layer 1) after branching extensively in layers 1-3. The remarkable difference in “height” of the apical tree, is a clear signature of this context dependence as pyramidal cells more superficially located in L5 cannot extend as far as more deeply positioned ones. Ther generated morphologies clearly capture this behavior (Fig. 3B).

Effect of morphology on intracellular calcium dynamics
There is growing interest in understanding calcium dynamics in dendrites, both experimentally and computationally. Many processes influence these dynamics, but in dendrites there is a strong contribution of morphology because the peak calcium levels are strongly determined by the surface to volume ratio (SVR) of each branch, which is inversely related to branch diameter. We explored the predicted variance of dendritic calcium concentrations due to local changes in dendrite diameter and how this is affected by the modeling approach used. We investigated this in a model of dendritic calcium spiking in different reconstructions of cerebellar Purkinje cells and in morphological analysis of neocortical and hippocampal pyramidal neurons (Anwar et al., 2014).
Traditionally, a Ca2+ pool with a single relaxation time constant is used to model intracellular Ca2+ dynamics. Such models compute the effects of Ca2+ influx accurately but combine all removal systems, including diffusion, into one process with a fixed time constant. They usually represent the Ca2+ concentration in a submembrane shell with a fixed depth. Previously, we have shown that these pool based models can not capture the complex dynamics of intracellular Ca2+ because they fail to simulate the multiple time scales at which interactions between Ca2+ channels and Ca2+-activated K+ channels occur (Anwar et al., 2012). In Anwar et al. (2014) we extended the comparison of Ca2+ pool to complex Ca2+ dynamics models to the spatial domain. We showed that many model implementations in the literature do not compute correct volumes for the submembrane shell, resulting in diameter-independent calcium concentrations in the model (Fig. 4A) and describe how to implement this correctly in the NEURON simulator, both for phenomenological pool based models and for implementations using radial 1D diffusion.

But, even with a correct implementation of the submembrane shell, pool models predict substantially smaller Ca2+ concentrations than mode detailed models simulating buffered 1D diffusion (Fig. 4C). Are the latter models sufficient to predict neural calcium concentrations at the typical resolution of compartmental models or is full 3D diffusion required? This is investigated in Fig. 5 by comparing 1D diffusion models in the NEURON simulator with full 3D diffusion in the STEPS simulator. Detailed comparison shows that 1D diffusion of models of calcium buffering give a good approximation provided an accurate morphological reconstruction is available and modeled in high resolution (Fig. 5D). 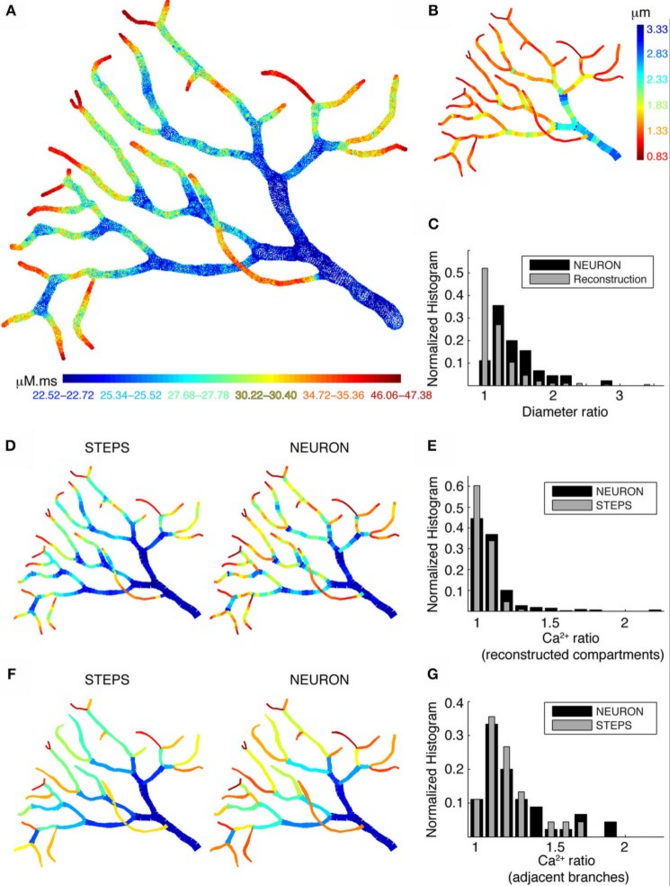 Figure 5: Large differences in calcium levels in adjacent dendritic branches persist in presence of 3D diffusion. A. STEPS model using 3D buffered diffusion to compute the Ca2+ concentration resulting from the burst of Ca2+ spikes. Spatial map of integrated calcium (140ms window) in a piece of carefully reconstructed PC dendritic arbor.  B. Spatial map of dendritic diameters in the dendrite. C. Normalized histograms compare the ratios of adjacent diameters in the original morphological reconstruction with similar ratios of diameters of adjacent compartments in the NEURON model (1 segment per unbranched section), demonstrating a large difference between these two distributions. D, E NEURON simulation with many compartments for each unbranched segment, carefully reflecting the variability of dendrite diameter. Data for the STEPS simulation are averaged over all tetrahedrons representing the corresponding NEURON compartment. D shows the respective spatial maps which are similar to the reference case shown in A. E shows a normalized histograms of the ratios of integrated Ca2+ concentration between every adjacent compartment, demonstrating a reasonable match between the results from the two simulators. F,G NEURON simulation with a single compartment for each unbranched segment (a 'poor' reconstruction), data for the STEPS simulation averaged for corresponding NEURON compartments. Again the normalized histogram (G) shows a good match between the two simulators, but the spatial maps (F) are very different from the reference case (A).

Recent Findings on the Cerebellar Microcircuitry