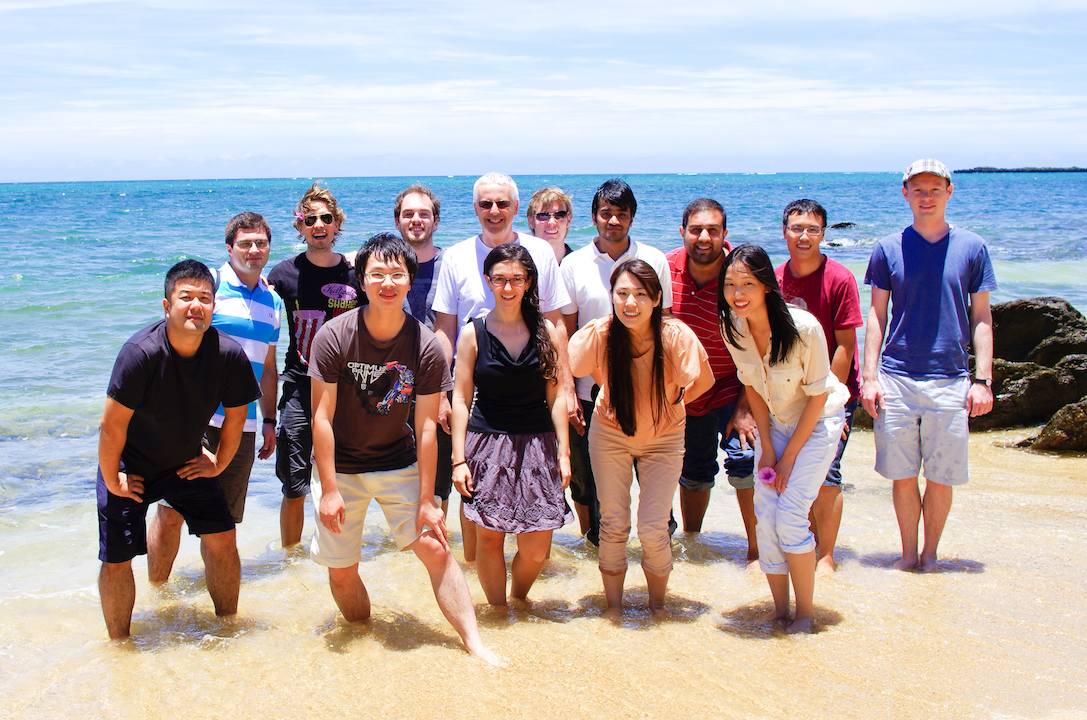 A pipeline for simulator-independent network modeling
The ability to develop models of complex neural networks in a simulator independent manner has been a longstanding goal of the computational neuroscience community. An important reasons is because the effect of subtle differences in simulator implementations, for example the timing of spike propagation (Morisson et al. 2007), on the qualitative behavior of networks with complex neuronal models is unclear a priori. In addition, the relevance of constraints placed on model design by fundamental assumptions in the simulator architecture and features that are not available in all simulators, such as gap junctions and active dendritic compartments, has not been extensively studied. To begin to address such issues, we developed a pipeline to translate xml-based network model descriptions into code suitable for the NEURON and NEST simulators.
We implement this approach for a cerebellar cortex model defined using a custom declarative architecture, based on NineML and NeuroML 2.0 where possible, and otherwise extended to meet the requirements of the model. Neuronal dynamics are described using a custom extension to the NineML language for conductance-based dynamics, which is compiled directly into simulator-native model formats (Raikov and De Schutter 2012).  Connections between neuronal populations within the model are generated from a combination of morphologically based and soma-to-soma geometric connectivity rules. These rules are integrated into PyNN framework (Davison et al. 2008), which handles all the appropriate simulator-dependent connection routines. Where required by the NEURON simulator model, cell morphologies and gap junction connectors for the NEURON simulator are constructed by custom extensions to the PyNN framework, where the morphologies are built from descriptions in the NeuroML 2 morphology format.
In previous modeling, the behavior of the cerebellar granular layer sub-network has been shown to be strongly affected by the Golgi-to-Golgi gap junctions (de Souza and De Schutter 2011), making the cerebellar cortex an interesting system in which to study the implications of different implementations of gap junction connections. Therefore, the differences between the NEURON and NEST implementations of the cerebellar cortex model should lend considerable insight into the practical issues that could limit the development of truly simulator independent models.

STEPS software development
Important new features were added to the stochastic reaction-diffusion simulator STEPS (Hepburn et al. 2012), resulting in the release of STEPS 2.0 in April 2013. The most important addition was the EField object to compute the membrane potential on the same tetrahedrical mesh in which the stochastic reaction-diffusion mechanisms are modeled (Hepburn et al. 2013). The tight and accurate integration of membrane potential calculation with the Stochastic Simulation Algorithm (SSA, Gillespie 1977) allowed for the investigation of stochastic calcium spikes in Purkinje cell dendrites described in section 3.3. In this scheme both channel gating and charge transitions through the channel pore can be fully stochastic. Next we strongly improved the deterministic modeling in STEPS by integrating the standard CVODE module (Cohen and Hindmarsh 1996) as one of the soultion engines. The STEPS implementation allows different some parts of the model to be run stochastically and other ones to be run deterministically. This hybrid modeling approach is a very effective way to identify the sources of stochasticity in complex systems (Anwar et al. 2013).

The role of dendritic spine morphology in compartmentalizing surface receptors
Since AMPA receptors are major molecular players in both short- and long-term plasticity, it is important to identify the time-scales of and factors affecting the lateral diffusion of AMPARs on the dendrite surface. Using a mathematical model, we studied how the dendritic spine morphology affects two processes: (1) compartmentalization of the surface receptors in a single spine to retain local chemistry and (2) the delivery of receptors to the post-synaptic density (PSD) of spines via lateral diffusion following insertion onto the dendrite shaft. Computing the mean first passage time (MFPT) of surface receptors on a sample of real spine morphologies revealed that a constricted neck and bulbous head serve to compartmentalize receptors, consistent with previous studies (Holcman and Schuss 2011). We found that the location of the PSD corresponds to the location at which the maximum MFPT occurs, the position that maximizes the residence time of a diffusing receptor.
Meanwhile, the same geometric features of the spine that compartmentalize receptors inhibit the recruitment of AMPARs via lateral diffusion from dendrite insertion sites. Spines with narrow necks will trap a smaller fraction of diffusing receptors in the their PSD when considering competition for receptors between the spines, suggesting that ideal geometrical features involve a tradeoff depending on the intent of compartmentalizing the current receptor pool or recruiting new AMPARs in the PSD. The ultimate distribution of receptors among the spine PSDs by lateral diffusion from the dendrite shaft is an interplay between the insertion location and the shape and locations of both the spines and their PSDs.

Probabilistic induction of cerebellar long-term depression
Many cellular processes involve a small number of molecules and undergo stochastic fluctuations in their levels of activity. Cerebellar long-term depression (LTD) is a form of synaptic plasticity expressed as a reduction in the number of synaptic AMPARs in Purkinje cells. We developed a stochastic model of the LTD signaling network, including a PKC-ERK-cPLA2 positive feedback loop and mechanisms of AMPAR trafficking, and tuned the model to replicate calcium uncaging experiments (Antunes and De Schutter 2012). 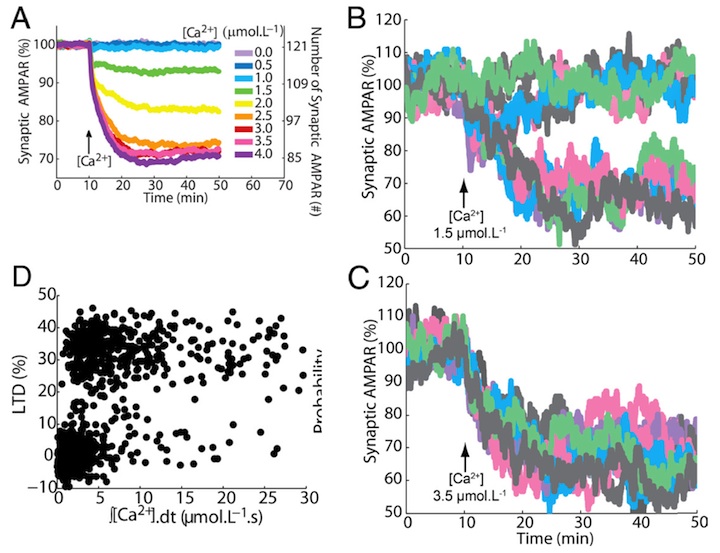 Figure 1: (A) Averaged output of the stochastic model: a graded reduction of the number of AMPARs depending on the amplitude of the calcium stimulus accurately replicates experimental LTD data (Tanaka et al. 2007). (B, C) In single spines (or single trial of the model) the response is bistable: each color represents a different run of the model. For a low calcium stimulus both non-LTD and LTD are observed (B), for a high stimulus only LTD (C). (D) These responses are probabilistic: the integrated stimulus calcium concentraion shows no clear threshold for LTD induction. Replicated from Antunes and De Schutter (2012).

The signaling network activity in single synapses switches between two discrete stable states (LTD and non-LTD, Figure 1B-C) in a probabilistic manner. The stochasticity of the signaling network causes threshold dithering and allows at the macroscopic level for many different and stable mean magnitudes of depression (Figure 1A). The probability of LTD occurrence in a single spine is only modulated by the concentration and duration of the signal used to trigger it, and inputs with the same magnitude can give rise to two different responses; there is no threshold for the input signal (Figure 1D). The stochasticity is intrinsic to the signaling network and not mostly dependent on noise in the calcium input signal, as has been suggested previously.

The activities of the ultrasensitive ERK and of cPLA2 undergo strong stochastic fluctuations. Conversely, PKC, which acts as a noise filter, is more constantly activated. Systematic variation of the biochemical population size demonstrates that threshold dithering and the absence of spontaneous LTD depend critically on the number of molecules in a spine, indicating constraints on spine size in Purkinje cells.

Stochastic mechanisms in dendritic calcium spike burst generation
Dendritic bursts of calcium spikes are generated by interaction of voltage gated calcium channels and calcium-activated potassium channels, where the interaction is mediated through intracellular calcium mechanisms present in and around the complex cellular morphology. In electrophysiological recordings of Purkinje cells, these calcium bursts are observed to come in a variety of shapes. Each calcium spike can consist of variable number of spikelets (generally 1-4 spikelets) with varying amplitudes. However, the underlying mechanisms of calcium spike generation have never been investigated thoroughly. A few of the factors causing this diversity could be ion channel modulation, varying ion channel distributions and stochastic behavior of ion channels and calcium-related mechanisms. Past studies have focused on stochasticity of voltage-gated ion channels to study its effect on neuronal excitability but have ignored the intracellular aspects, in particular calcium dynamics.
We investigated the mechanisms of dendritic calcium spike generation in Purkinje neurons (Anwar et al. 2013). In our study, we developed a STEPS model for dendritic calcium spikes, which included P- and T- type calcium channels, BK- and SK- type calcium-activated potassium channels, parvalbumin and calbindin as calcium buffers, pumps, diffusion of Ca2+ molecules, diffusion of free buffers and diffusion of Ca2+ bound buffers (based on Anwar et al. 2012). We ran a series of stochastic, deterministic and hybrid simulations to investigate the different sources of noise individually and together, and compare to deterministic solutions.
By comparing the variability in calcium spikes generated using dendritic sections of different lengths, we could demonstrate the significance of stochastic behavior of ion channels and stochastic behavior of calcium-related mechanisms in calcium spike generation. Although the noise in the system reduced by increasing the model size, there was a significant level of stochasticity in larger dendritic compartments to cause variability in calcium spike characteristics, indicating that the variability we observed is significant in a whole-cell context.

Geometric theory predicts bifurcations in minimal wiring cost trees in biology are flat
The complex three-dimensional shapes of tree-like structures in biology are constrained by optimization principles, but the actual costs being minimized can be difficult to discern. We analyzed and found that despite quite variable morphologies and functions, bifurcations in the scleractinian coral Madracis and in many different mammalian neuron types tend to be planar (Kim et al. 2012). We have proves that in fact bifurcations embedded in a spatial tree that minimizes wiring cost should lie on planes. This biologically motivated generalization of the classical mathematical theory of Euclidean Steiner trees is compatible with many different assumptions about the type of cost function. Since the geometric proof does not require any correlation between consecutive planes, we predicted that, in an environment without directional biases, consecutive planes would be oriented independently of each other. This was confirmed for many branching corals and neuron types. Consequently, it seems that planar bifurcations are characteristic of wiring cost optimization in any type of biological spatial tree structure.

Period coding in suprachiasmatic nucleus
Circadian oscillators in the suprachiasmatic nucleus (SCN) collectively orchestrate 24 hour rhythms in the body while also coding for seasonal rhythms. Although synchronization is required among SCN oscillators to provide robustness for regular timekeeping, heterogeneity of period and phase distributions is needed to accommodate seasonal variations in light duration. In the mouse SCN, the heterogeneous phase distribution has been recently found in the cycling of clock genes Period 1 and Period 2 (Per1, Per2) and has been shown to reorganize by relative day lengths (Inagaki et al. 2007). However, it was not yet clearly understood what underlies the spatial patterning of Per1 and Per2 expression and its plasticity. We found that the period of the oscillation in Bmal1 expression, a positive-feedback component of the circadian clock, preserves the behavioral circadian period under culture and drives clustered oscillations in the mouse SCN (Myung et al. 2012). Pharmacological and physical isolations of SCN subregions indicate that the period of Bmal1 oscillation is subregion specific and is preserved during culture. Together with computer simulations, we show that either the intercellular coupling does not strongly influence the Bmal1 oscillation or the nature of the coupling is more complex than previously assumed. Furthermore, we have found that the region-specific periods are modulated by the light conditions that an animal is exposed to. Based on these, we suggest that the period forms the basis of seasonal coding in the SCN.