Seminar by Prof. Sandini "From Humanoid Robots to Anthropomorphic Minds" 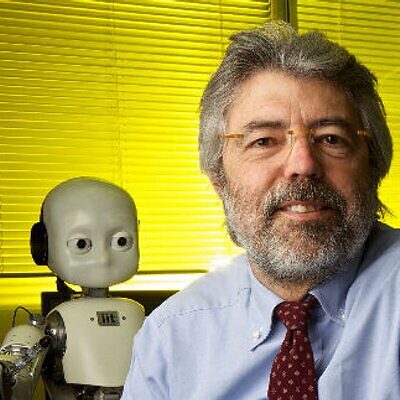 Robotic technologies have been steadily improving in the last years up to a point that sensing and motion abilities of robots are approaching and in some cases exceeding those of humans. These abilities, spanning from robots able to express emotions to robots executing fantastic gymnastic exercises have created the impression that a society where humans and robots co-exist and collaborate is not very far away. Is this true?

During the talk, I will argue that even if robots are motorically and sensorially very skilled and extremely clever in action execution, the technologies supporting their interaction with humans are still very primitive and based mainly on human ability to adapt to the technology rather than on mutual understanding. Stemming from this observation, I will address three points. First the fact that the asymmetry between action execution and understanding is rooted in our limited knowledge of the mechanisms at the basis of human social interaction and in particular in our ability to anticipate our own actions and those of others. Second that discovering the principles of mutual understanding is a necessary intermediate step to investigate alternative “artificial” technologies implementing such principles (airplanes do not flap wings but bird’s wings and airplane’s propellers are two different technologies acting on the same principles). Finally I will argue that robotics can serve a very crucial role by joining forces with the communities studying embodied intelligence and the cognitive aspects of social interaction and by co-designing robots able to establish a mutual communication channel with a human partner (the distinctive mark of human social interaction) [Sandini & Sciutti, 2018].

Sandini, G. and A. Sciutti, Humane Robots—from Robots with a Humanoid Body to Robots with an Anthropomorphic Mind. ACM Transactions on Human-Robot Interaction, 2018. 7(1): p. Article 7.

Giulio Sandini is Director of Research at the Italian Institute of Technology and full professor of bioengineering at the University of Genoa. He was research fellow and assistant professor at the Scuola Normale Superiore in Pisa and Visiting Research Associate at the Department of Neurology of the Harvard Medical School. In 1990 he founded the LIRA-Lab (Laboratory for Integrated Advanced Robotics, www.liralab.it) and in 1996 he was Visiting Scientist at the Artificial Intelligence Lab of MIT.

Since 1980 Giulio Sandini coordinated several international projects in the area of computer vision, cognitive sciences and robotics. Among them the project RobotCub, funded by the "Cognitive Systems" unit of the European Union from 2004 to 2010, where he coordinated the activities of 11 European partners contributing to the realization of the iCub humanoid platform as a tool to investigate human sensory, motor and cognitive development. (FP6-P004370: https://cordis.europa.eu/project/rcn/71867/factsheet/en).

Giulio Sandini is a Founding Director of the Italian Institute of Technology where in 2006 he established the department of Robotics, Brain and Cognitive Sciences.