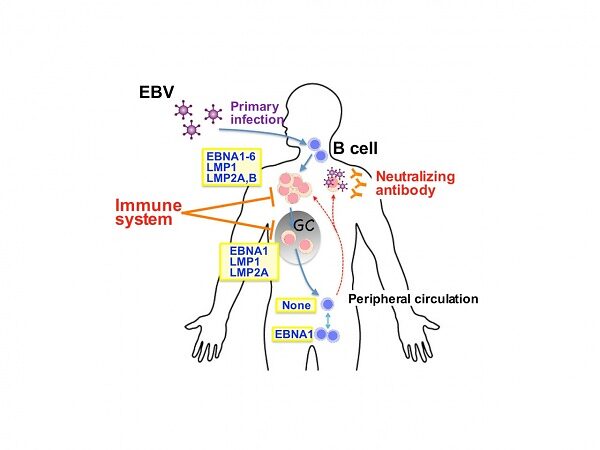 Abstract: B cells infected by Epstein-Barr virus (EBV), a transforming virus endemic in humans, are rapidly cleared by the immune system, but some cells harboring the virus persist for life. Under conditions of immunosuppression, EBV can spread from these cells and cause life-threatening pathologies. We have generated mice expressing the transforming EBV latent membrane protein 1 (LMP1), mimicking a constitutively active CD40 coreceptor, specifically in B cells. We reported a mouse model in which LMP1 expression on B cells from the early developmental stage induces activation and expansion of both CD4+ and CD8+ T cells, and LMP1-expressing B cells are eliminated from the tissues except for a few cells in bone marrow. Breaking immune surveillance resulted in rapid and fatal lymphoproliferation and lymphomagenesis. These observations indicate a central role for LMP1 in the surveillance and transformation of EBV-infected B cells in vivo, and establish a preclinical model for B cell lymphomagenesis in immunosuppressed patients. Here we present two related new mouse models: In one we model primary EBV-infection in humans, infectious mononucleosis. In the other, we target the expression of EBV proteins to germinal center B cells and obtain EBV driven tumors originating from these cells. These new mouse models provide opportunities to elucidate the mechanism of severe disease associated with primary EBV-infection such as X-linked lymphoproliferative (XLP) syndrome as well as how immune surveillance against EBV-infected cells is established and maintained, and lymphomas develop from germinal center or post-germinal center B cells as they do in immunosuppressed patients.