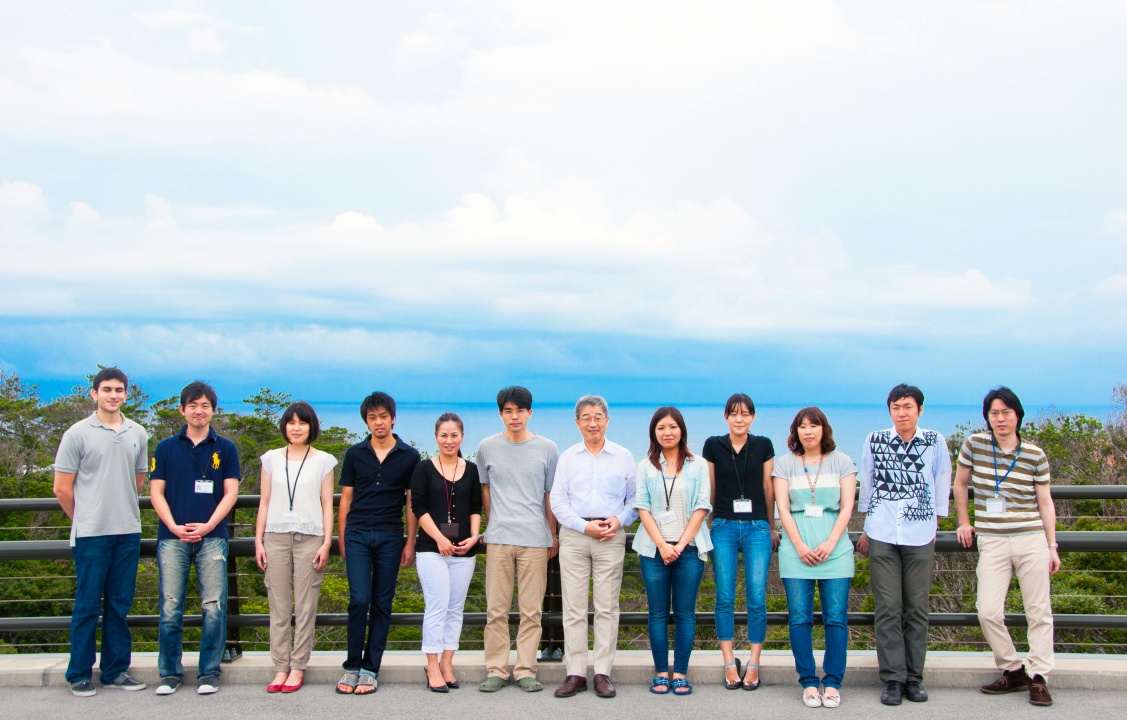 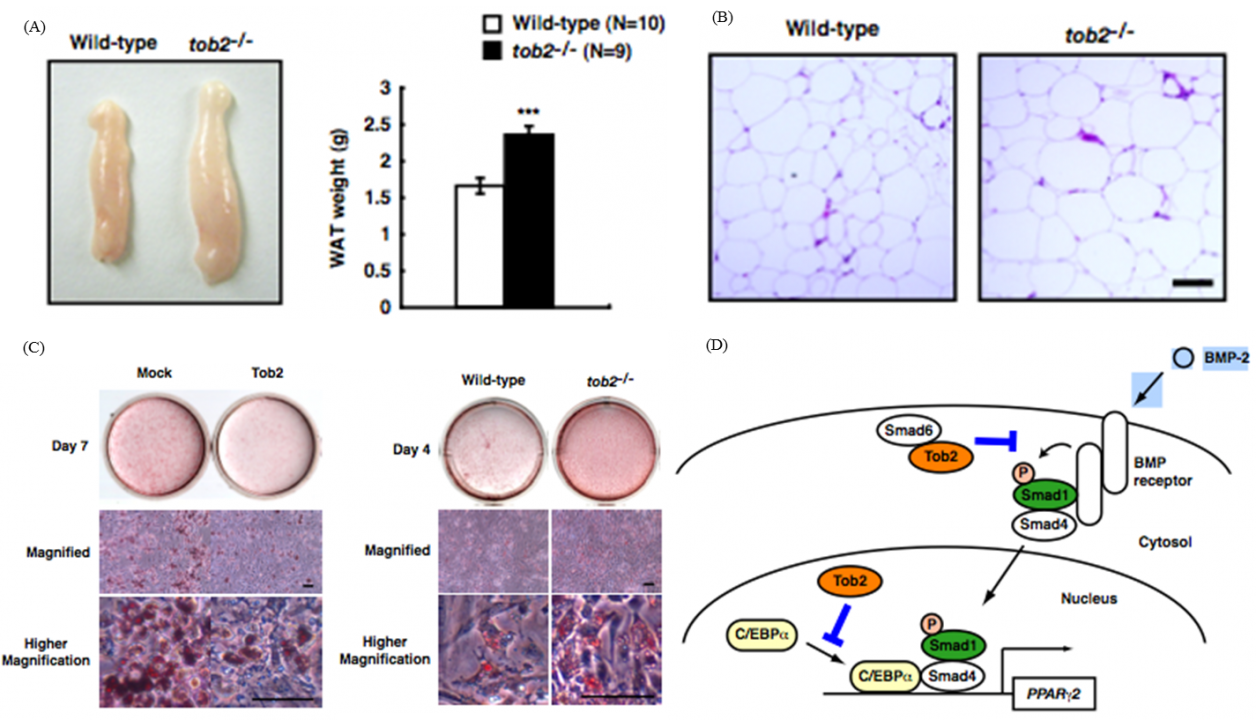 Apart from these anti-proliferative and/or anti-differentiation characters, Tob exhibits anti-apoptotic properties in response to DNA damage. UV (high dose)-induced stress promotes proteasome-dependent degradation of Tob, triggering an apoptotic signal. Low-doses of UV do not trigger apoptosis and do not promote Tob degradation either. Rather, Low-doses of UV stabilize Tob. Suppression of Tob by small-interfering RNAs results in frequent induction of apoptosis in response to low doses of UV. This induction of apoptosis occurs irrespectively to the presence or absence of functional p53. Taken together, clearance of Tob provides a novel p53-independent pathway for UV-induced apoptosis. Involvement of proteasomes in degradation of Tob has been reported. We found that Cul4-DDB1(Cdt2) induces ubiquitination and degradation of Tob. Interestingly, DNA replication-initiating kinase Cdc7 inhibits Cul4-DDB1(Cdt2)-induced Tob degradation (Fig. 2). Cdc7-mediated Tob phosphorylation appears to contribute to suppression of a low dose of UV-induced apoptosis. 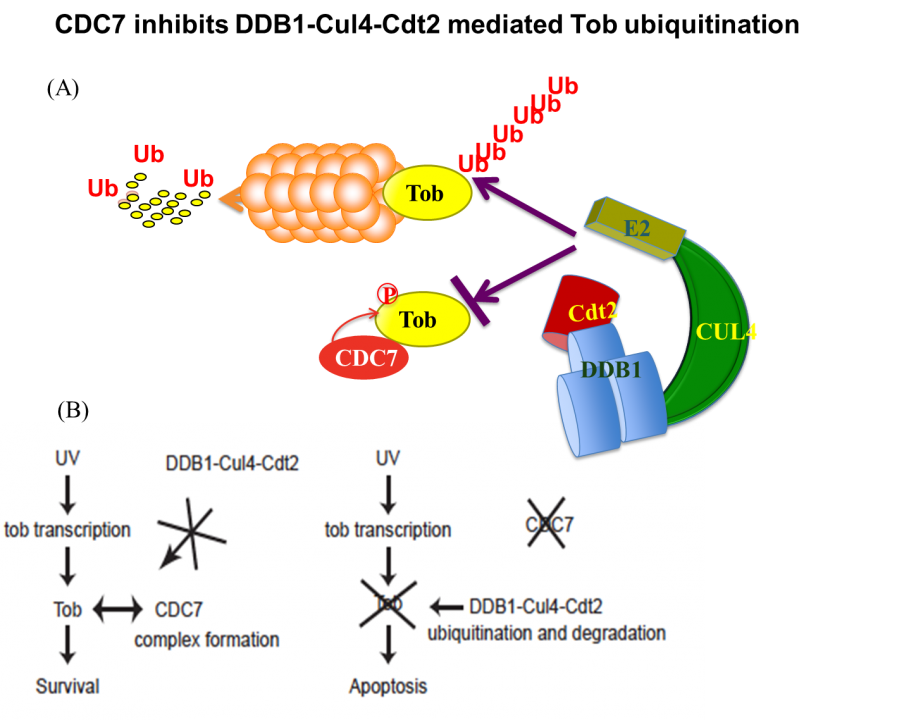 Fig. 2 (A) CDC7 protects Tob from ubiquitination–dependent proteasomal degradation.  (B) Tob is inhibitory against UV-induced apoptosis.

Apparently, Tob exhibits multiple functions. To address the molecular mechanisms that would explain the multi-functionality, we carried out mass spectrometric analysis of the Tob-interacting proteins prepared from the lysates of HeLa cells and identified CNOT proteins that formed a large (2.0 MDa and 1.2 MDa) complex called CCR4-NOT. The CCR4-NOT complex is conserved from yeast to human and is associated with the mRNA deadenylase activity. In yeast, two components of the complex, Ccr4p and Caf1p, possesses the deadenylase activity. The mammalian orthologs of Ccr4p are CNOT6 and CNOT6L, and those of Caf1p are CNOT7 and CNOT8. Our recent structural analysis of the CNOT6L complexed with nucleotides revealed a deadenylation mechanism involving a pentacovalent phosphate transition. As Tob also interacts with poly(A)-binding protein (PABP), we assume that Tob could be involved in recruitment of the CCR4-NOT complex to the poly(A) sequence at the 3’end of mRNAs (Fig. 3).

Fig. 3 A role of Tob in recruitment of the CCR4-NOT deadenylase to mRNA poly(A) tails

To help understand the physiological significance of the CCR4-NOT deadenylase complex in mammals, we have knocked-down the expression of each subunit by treating the cultured cells with shRNA and/or siRNA. Depletion of CNOT1 or CNOT2 induced protein overexpression due to the stabilization of many mRNA species, resulting in the ER stress-induced apoptotic death. Depletion of CNOT6L from NIH3T3 cells specifically augmented the stability of p27kip1 mRNA, causing cell cycle arrest at the G1 phase. CNOT3 depletion in cultured cells induced elevation of the mad1 mRNA level and impaired the M-phase checkpoint response. It remains to be elucidated how the CCR4-NOT deadenylase complex recognizes the specific mRNAs.

To examine the in vivo functions of CCR4-NOT deadenylase complex, we generated gene-engineered mouse lines each lacking individual cnot genes. We found that deficiency of every cnot gene, except cnot6, cnot6L and cnot7, causes embryonic death at distinct developmental stages. Mice lacking cnot1, 2, 3, 8, 9 and 10, respectively die at embryonic day around 7.5 (E7.5), E15.5, E6.5, E9.5, and E10.5. The cause of death appears to be different between the mice lines. For example, cnot3-/- mice die due to the defect of early embryogenesis and cnot9-/- mice due to poor vasculogenesis. Though cnot7-/- mice appears normal, male are sterile due to poor spermatogenesis. Phenotypes of cnot6-/- and cnot6L-/- mice are under extensive analysis. The results tentatively suggest that gene expression is distinctively affected in each mouse lines and that non-enzymatic subunits of the CCR4-NOT complex are relevant to regulate target specificity of the CCR4-NOT complex.

Although cnot3-/- mice are embryonic lethal, cnot3+/- mice are lean with hepatic and adipose tissues containing reduced levels of lipids, and show increased metabolic rates and enhanced glucose tolerance. cnot3+/- mice remain lean and sensitive to insulin even on a high-fat diet. Hepatic expression of most mRNAs is not altered in cnot3+/- vis-à-vis wild-type mice. However, the levels of specific mRNAs, such as those coding for energy metabolism-related PDK4 and IGFBP1, are increased in cnot3+/- hepatocytes, having poly(A) tails that are longer than those seen in control cells. We provided evidence that CNOT3 is involved in recruitment of the CCR4-NOT deadenylase to the 3' end of specific mRNAs. Similarly, change of expression of various mRNAs in mice lacking other subunits has been monitored by employing expression microarray analysis, Real-time PCR, and Northern blot analysis. A subset (not all) of mRNA species was increased in each gene-engineered mouse, which is consistent with the idea that the CNOT complex targets specific sets of mRNAs for deadenylation depending on temporal and special conditions. Efforts to elucidate the molecular mechanism by which the CCR4-NOT complex recognizes specific mRNAs are ongoing (Fig. 4). 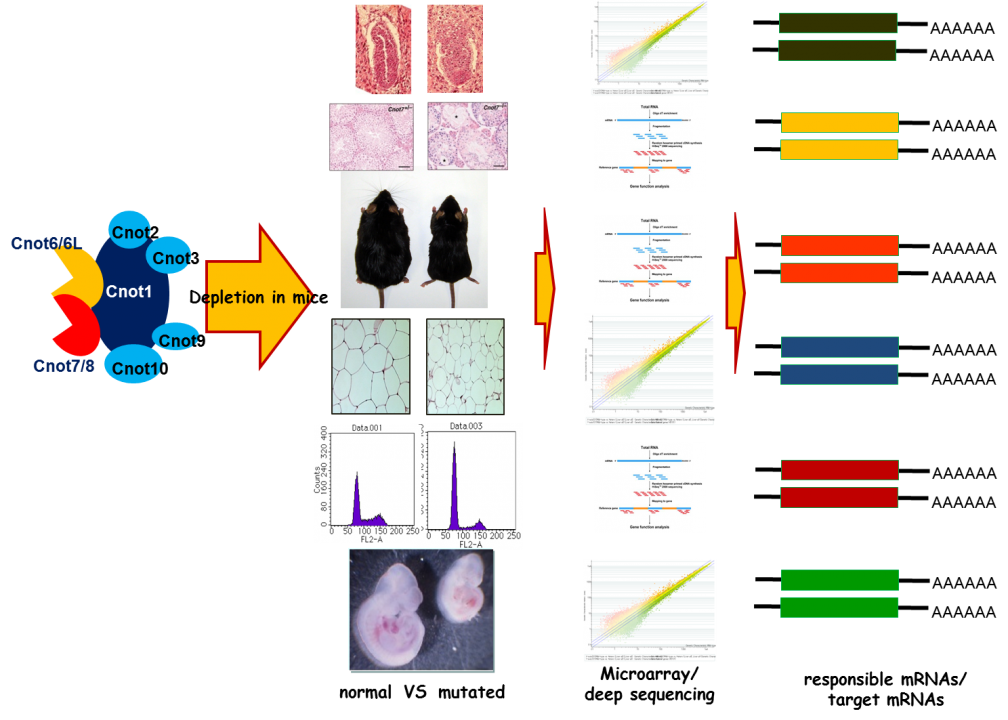 Fig. 4 Strategy for the analysis of CCR4-NOT target mRNAs

2. Roles of protein-kinase signaling and adhesion signaling in the central nervous system.

The Src-family protein-tyrosine kinases are implicated in various neural functions such as formation of neural network, myelination, and synaptic plasticity. To analyze the roles of Src and Fyn, we have been focusing on various substrates of these kinases, including N-methyl-D-aspartate (NMDA) type of ionotropic glutamate receptors. Our own studies showed that GluN2A and GluN2B subunits of NMDA receptors, which play important roles in learning, memory formation, and emotional behavior, are the major substrates of Fyn and Src. We identified Tyr-1472 phosphorylation on GluN2B and Tyr-1325 phosphorylation on GluN2A as the major tyrosine phosphorylation site of GluN2B and GluN2A, respectively. Using the knock-in mouse lines expressing mutant GluN2B with a Tyr-1472-Phe (Y1472F) mutation or expressing mutant GluN2A with a Tyr-1325-Phe (Y1325F) mutation, we showed that GluN2B Tyr-1472 phosphorylation is important for fear-related learning in the amygdala and that GluN2A Tyr-1325 regulates depression-related behavior. We further obtained data suggesting that Tyr-1472 phosphorylation of GluN2B is involved in development of postherpetic allodynia due to nerve damage and that the nerve damage at the acute herpetic phase is correlated with the incidence of postherpetic pain.

In parallel of the studies on NMDAR phosphorylation, we have been trying to identify binding partners and substrates of Fyn in the brain using solid-phase phosphorylation screening, yeast two-hybrid screening, and proteomic approaches. As a result, we have identified a number of putative mediators of Fyn-mediated signaling, including NYAP, FAK, p250GAP, TCGAP, Nogo-A, and RhoGEFs. Recently, we provided evidence suggesting that TCGAP (=ARHGAP33) is associated with schizophirenia: #1, a single nucleotide polymorphism of TCGAP is associated with decreased expression in patients with schizophirenia; #2, tcgap-/- mice show reduced expression of surface TrkB in neuron, impaired spine development, and deficit in formation of spatial working memory, a phenotype associated with schizophirenia.

(ii) Lemur tyrosine kinases (LMTKs) form a family of protein kinases that are predominantly expressed in the central nervous system. Members of this kinase family, LMTK1-3, comprise an N-terminal transmembrane region, a Ser/Thr kinase domain, and a long C-terminal tail region. We have reported that LMTK2 (or BREK) interacts with a motor protein, myosin VI, and is involved in the regulation of endosomal membrane trafficking in cultured cell lines. LMTK1 also regulates formation of the endocytic regulatory compartment, suggesting that control of membrane traffic is a common function of this family of kinases. Although we have reported that Lmtk2/Brek-deficient mice are infertile and that LMTK2 is essential for the late stages of spermatogenesis, it is not clear how endocytic events are relevant to spermatogenesis. We do not know either the physiological functions of the LMTK2/BREK kinase in the central nervous system. Another member of the LMTK family, LMTK3, is highly expressed in the cerebral cortex, cerebellum, and hippocampus. To address LMTK3’s biological characteristics and in vivo function, we first generated mouse mutants deficient for the lmtk3 gene. We found that lmtk3-/- mice exhibits prominent behavioral abnormalities, including locomotor hyperactivity, reduced anxiety, and decreased depression-like behavior, providing the first evidence for a physiological role of the LMTK family in the central nervous system. Furthermore, we provided evidence that LMTK3 is involved in regulation of endocytic trafficking of NMDAR.

(iii) The anatomical topography of neural circuits generally emphasizes distinct functional units. Functional establishment of this topography requires circuit-specific differentiation and refinement of synapses. Synapse development in individual circuits is organized by various types of adhesion molecules. Proteins of the cadherin superfamily, including the protocadherin family participate in synapse-specific interactions. This family of proteins is expressed in synaptic junctions between different types of neurons in neural circuits. Owing to their highly selective adhesive interactions, cadherin-catenin complexes are required for both pre- and postsynaptic development. Although some cadherin members are expressed in specific zones of the basal ganglia, their roles in circuit-specific synaptic development and their physiological significance remain unclear. We have addressed the biological significance of PCDH17, a non-clustered δ2-protocadehrin family member. Our results indicate that PCDH17 plays a crucial role in the regulation of synaptic vesicle assembly in cortico-basal ganglia circuits. Furthermore, PCDH17 deficiency leads to altered presynaptic function in the cortico-striatal pathway. We also observed antidepressant-like phenotypes in PCDH17−/− mice. These results provide new insights into the mechanisms underlying the synaptic development of specific cortico-basal ganglia circuits and the physiological role of depression-related behaviors. 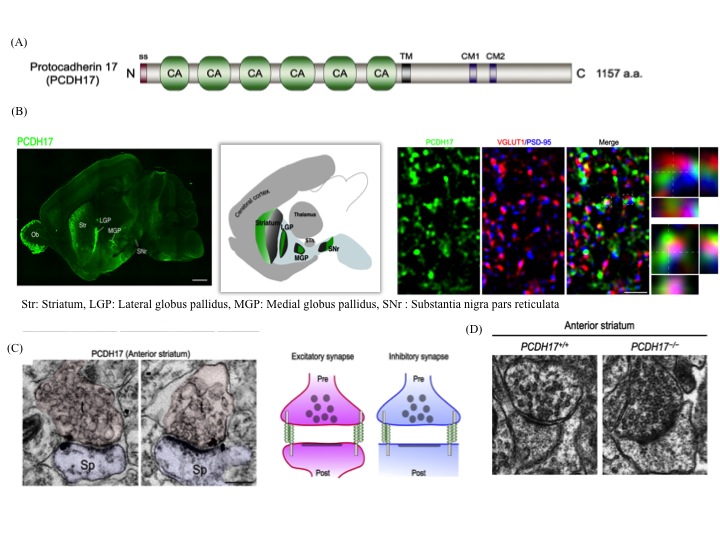 6.6  Meeting of JST PRESTO(Sakigake)  “Design and Control of Cellular Functions”.