Mammals as well as other organisms respond properly to various signals from environments. Deterioration of this mechanisms leads to induction of anomalies such as cancer. We have been interested in the intracellular signaling pathway and gene expression that becomes altered in response to extracellular signals. Gene expression is regulated at the levels of transcription and post-transcription. In the research program of this Unit, we focus on studying the mechanism that underlies the control of mRNA stability. The mechanism involves coordinated actions of various factors such as intracellular signaling proteins, RNA binding proteins, microRNAs, and deadenylases. A large protein complex termed CCR4-NOT, conserved from yeast to human and contained at least nine subunits, acts as major deadenylases that trigger mRNA decay. By analyzing structure and function of the protein components of the complex, and by studying phenotypes and pathology of gene manipulated mice in which each component of the deadenylase complex is mutated one by one, we will establish general mechanisms by which each specific mRNA species is targeted to decay in the context of intracellular signaling. 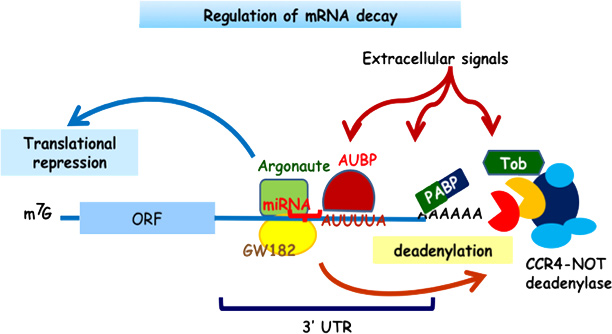