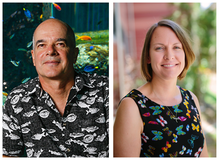 Many short-term experiments have demonstrated the potential impacts of ocean warming and acidification on marine organisms. However, longer-term experiments are needed to test the capacity for acclimation and adaptation to these stressors. In this talk we will describe unique multigenerational experiments being used to test the effects of warming and acidification on coral reef fishes and explore their capacity for thermal plasticity and adaptation.(...)

Title: Epigenetics for thermal plasticity in a reef fish

Elevated ocean temperature exacerbates physiology and survival of many marine organisms. Recent studies showed that some species can fully restore the physiological traits either within one or after multiple generations depending on the populations. Uncovering cellular mechanisms of such phenotypic plasticity is important to understand and predict species’ or populations’ response to climate change. We tried to identify epigenetic mechanisms related to within- and transgenerational plasticity using the high and low latitude population of Great Barrier Reef fish, Acanthochromis Polyacanthus, which showed thermal acclimation at the first or second generations, respectively. By sequencing genome and DNA methylomes of fish reared in the control and future predicted temperatures (+1.5 and +3 °C) at the whole genome level, differentially methylated genomic regions and related genes were identified. Functions related to nutrient homeostasis, cardiovascular capacity, and development and were significantly enriched among differentially methylated genes of high latitude F1 population, which were scarcely enriched among those of low latitude F2 population, indicating highly coordinated regulation of these functions for within- compared to transgenerational plasticity.