The Marine Biophysics Unit is at its core, cross-disciplinary. The unit includes researchers of biochemistry, hydrodynamics as well as biologists that study everything from the micro-organism to biogeographic scale. All of this research is connected through Professor Mitarai and his understanding of fluid dynamics and physical oceanography that is fundamental to all of the unit’s research.

The Marine Biophysics Unit was established at OIST in 2009, making Okinawa its home because of its ideal geographic position and access to research resources. Okinawa is adjacent to the ‘Kuroshio’ current, which is responsible for the diverse marine species that can be found in this region. For better or worse we are also in the center of ‘Typhoon Alley’, making Okinawa and OIST the perfect place to study the unique biophysical phenomena that occur in the turquoise waters around us.

Okinawa is home to many rare marine species that live in unique ecosystems such as coral reefs, mangrove forests and deep-sea hydrothermal vents. These ecosystems and the creatures that inhabit them are often separated by hundreds of kilometers of open ocean. In the Marine Biophysics unit (MBU) we study how the physics of ocean currents and the biology of these species allows them to travel as juveniles across the open ocean.

Interactions between biology and physical oceanography not only occur at the large scale of connectivity but also at the scale of individual animals and bacteria. MBU’s other focus is to study how species like coral garden eels and plankton interact with the environment, including the effects of environmental factors on these creatures and vice versa. For example, the surface of marine bacteria may affect their nutrient acquisition in seawater, while environmental parameters may also affect their surface structures and conditions.

Another interaction we study is how the ocean interacts with human activities. For example, human land use on Okinawa island results in the washing of soil into the coastal coral lagoons, a process known locally as ‘red-soil runoff’. The biological response to this red soil in the ocean is complex and may have implications for human health. By understanding the processes of ‘connectivity’ and ‘bio-physical interactions’, we can protect them from human-induced changes that could otherwise lead to the collapse of vulnerable ecosystems in Okinawa or even the loss of rare species from the entire world. 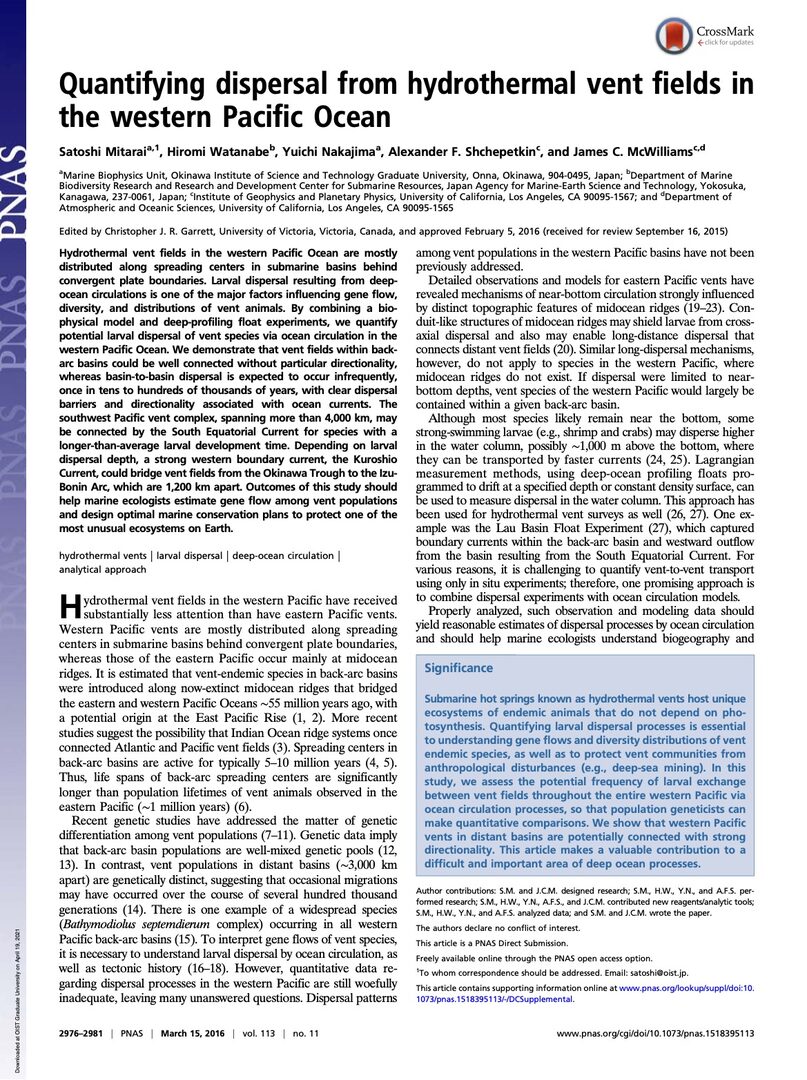 Quantification of marine population connectivity is key to understand global and longer-term changes of the marine ecosystem. The primary objectives of this project are i) to study dispersal mechanisms of marine species in order to learn how far larvae travel and how quickly they colonize new sites, and ii) to test these predictions of dispersal with recruitment and population genetic data that define the biogeographic characteristics of selected marine species. By understanding the dispersal processes, we hope to contribute to marine conservation planning, e.g., by facilitating optimal design of marine protected areas, which may prevent the collapse of vulnerable ecosystems in Okinawa and even the complete global loss of rare species. 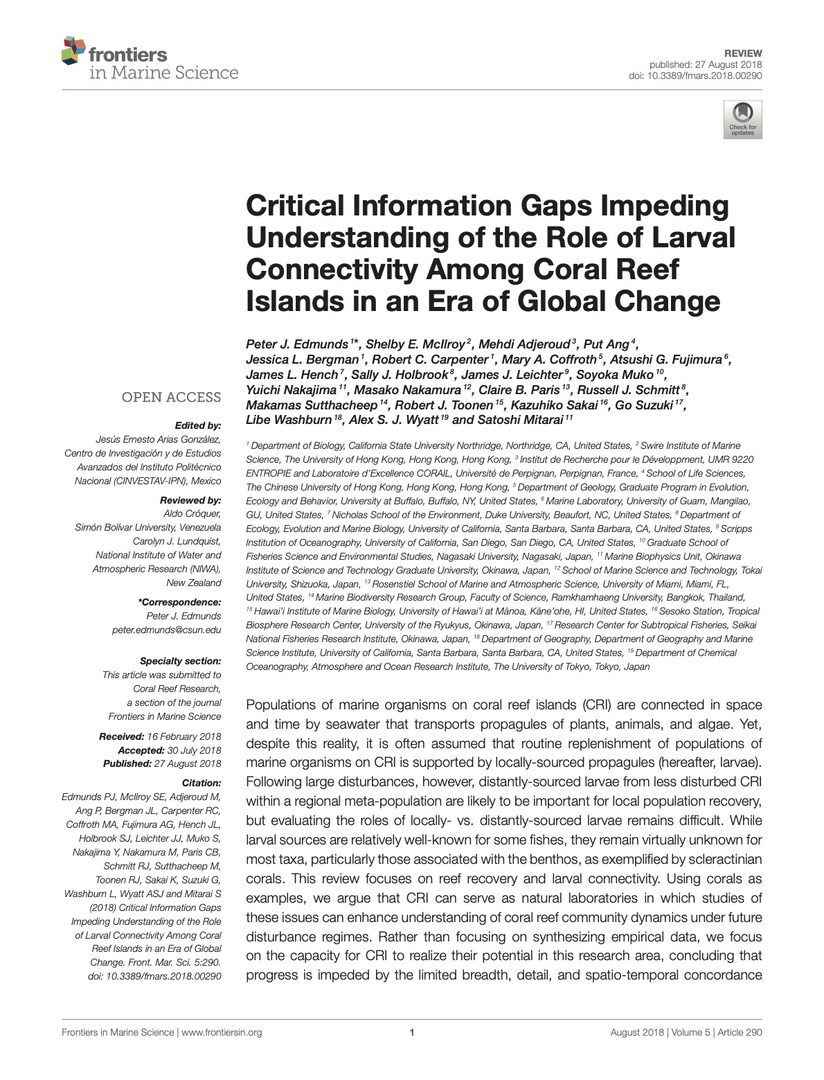 Global Biogeography in a Changing Environment

Partnerships with international collaborators are essential to address global-scale marine ecological issues. The Marine Biophysics Unit has been promoting global partnerships, including 5 OIST international workshops in 2010, 2012, 2013, 2016 and 2019, to address marine ecological problems in the changing global environment, especially in this era of anthropogenic climate change. Topics covered by past workshops have included global changes of coral recruitment patterns, changing population connectivity among coral reef islands, and international study of connectivity between hydrothermal vents. Together with our collaborators, we intend to quantify the influence of climate change on coral-reef and deep-sea, hydrothermal-vent ecosystems. 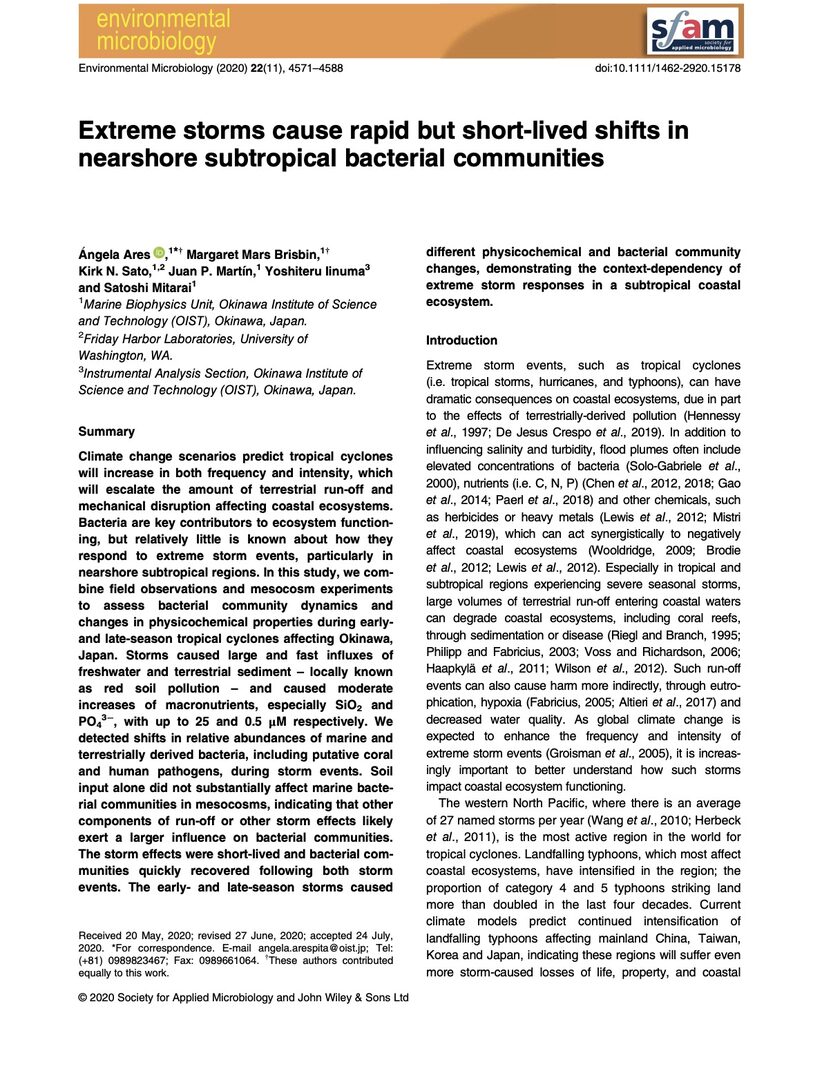 Marine Systems of the Ryukyus

Given the natural resources of Okinawa, and to make best use of research resources of OIST, the Marine Biophysics Unit has been conducting field studies, backed up with lab experiments at the OIST Marine Science Station. The primary focus of this project is to understand the influence of regional oceanography on marine life around the Ryukyus islands, e.g., stress responses of corals, distributions of microbial communities in the coral reefs and around hydrothermal vents, and impacts of typhoons and tsunami on local ocean physics and marine ecosystems. As well as studying local marine systems, members of the Marine Biophysics Unit are actively engaging with the public to introduce them to these systems through laboratory demonstrations, classroom activities and guided fieldwork.