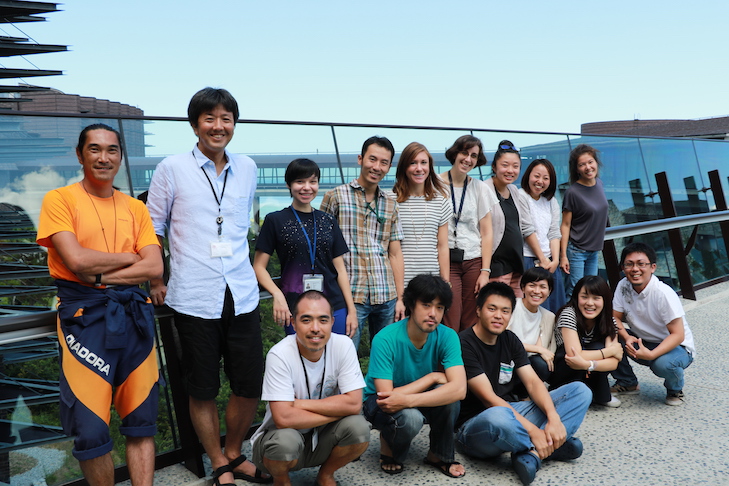 Hydrothermal vent fields in the western Pacific Ocean are mostly distributed along spreading centers in submarine basins behind convergent plate boundaries. Larval dispersal resulting from deep ocean circulations is one of the major factors influencing gene flow, diversity, and distributions of vent animals. By combining a biophysical model and deep-profiling float experiments, we quantify potential larval dispersal of vent species via ocean circulation in the western Pacific Ocean. We demonstrate that vent fields within backarc basins could be well connected without particular directionality, whereas basin-to-basin dispersal is expected to occur infrequently, once in tens to hundreds of thousands of years, with clear dispersal barriers and directionality associated with ocean currents. The southwest Pacific vent complex, spanning more than 4,000 km, may be connected by the South Equatorial Current for species with a longer-than-average larval development time. Depending on larval dispersal depth, a strong western boundary current, the Kuroshio Current, could bridge vent fields from the Okinawa Trough to the Izu-Bonin Arc, which are 1,200 km apart. Outcomes of this study should help marine ecologists estimate gene flow among vent populations and design optimal marine conservation plans to protect one of the most unusual exosystems on Earth. 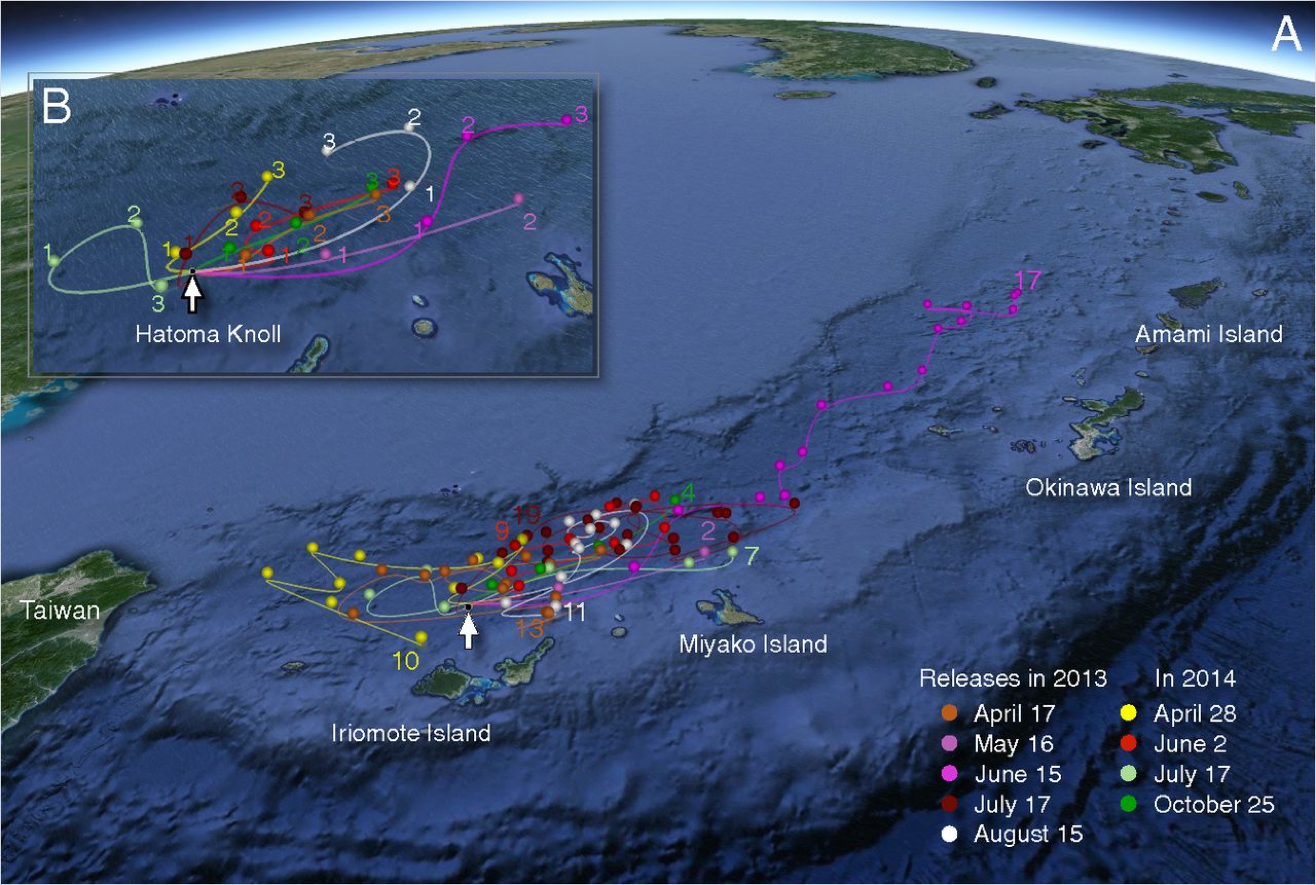 Figure 1: Dispersal processes in the deep sea show complex eddy motions, changing monthly or more often. (A) Trajectories of deep-sea profiling floats released from Hatoma Knoll (indicated with white arrows) in the Okinawa Trough, illustrating dispersal originating at a vent field within a back-arc basin. Floats were deployed semimonthly in 2013 and 2014 on dates indicated at the bottom right corner of the figure. Float tracks until March 2015 are shown here. These passively transported floats maintain their depth 1,000 m below the sea surface and return to the surface every 30 d (circles). Positions of each float at the sea surface are connected with cubic splines. The numbers show the cumulative sum of surfacing events, which indicate approximate drift times in months. (B) Close-up view of the same trajectories for the first three surfacing events. 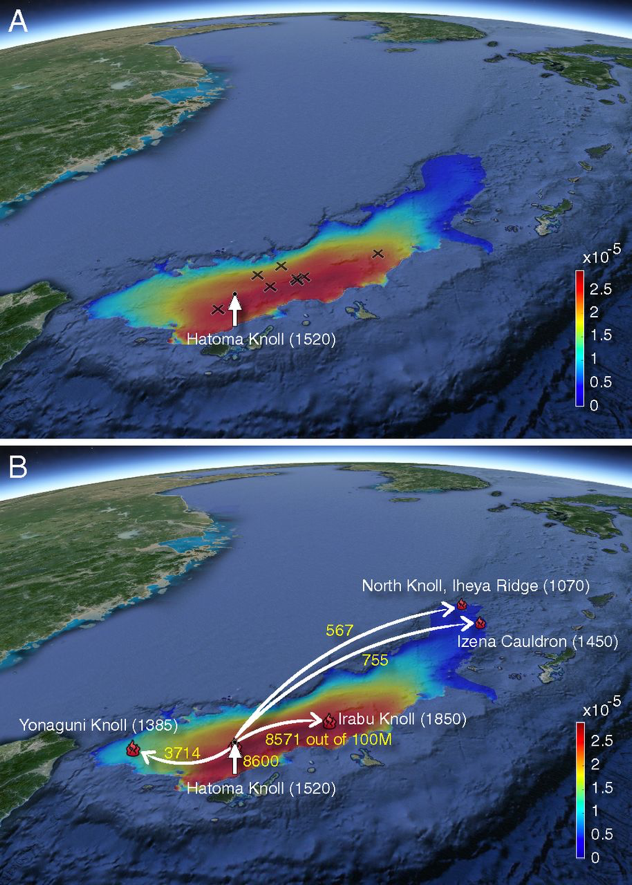 Figure 2: The ocean circulation model effectively quantifies potential larval dispersal from Hatoma Knoll. (A) Distributions of deep-profiling floats (cross markers) from Hatoma Knoll (white arrow) after 90 d of drifting 1,000 m below the sea surface show good agreement with predictions by the ocean circulation model (color contour). Colors indicate probability densities of float displacement per unit area (square kilometers). (B) Transport from Hatoma Knoll to other vent fields at a dispersal depth of 1,000 m (lines and numbers) deduced from the model. Five representative vent fields are shown. Numbers in brackets indicate the depth of each vent field. Drift time was set to the population mean for the mean temperature at a depth of 1,000 m (83 d). Numbers indicate the number of expected connections out of 100 million independent events. The number beside Hatoma Knoll represents likelihood of self-recruitment. 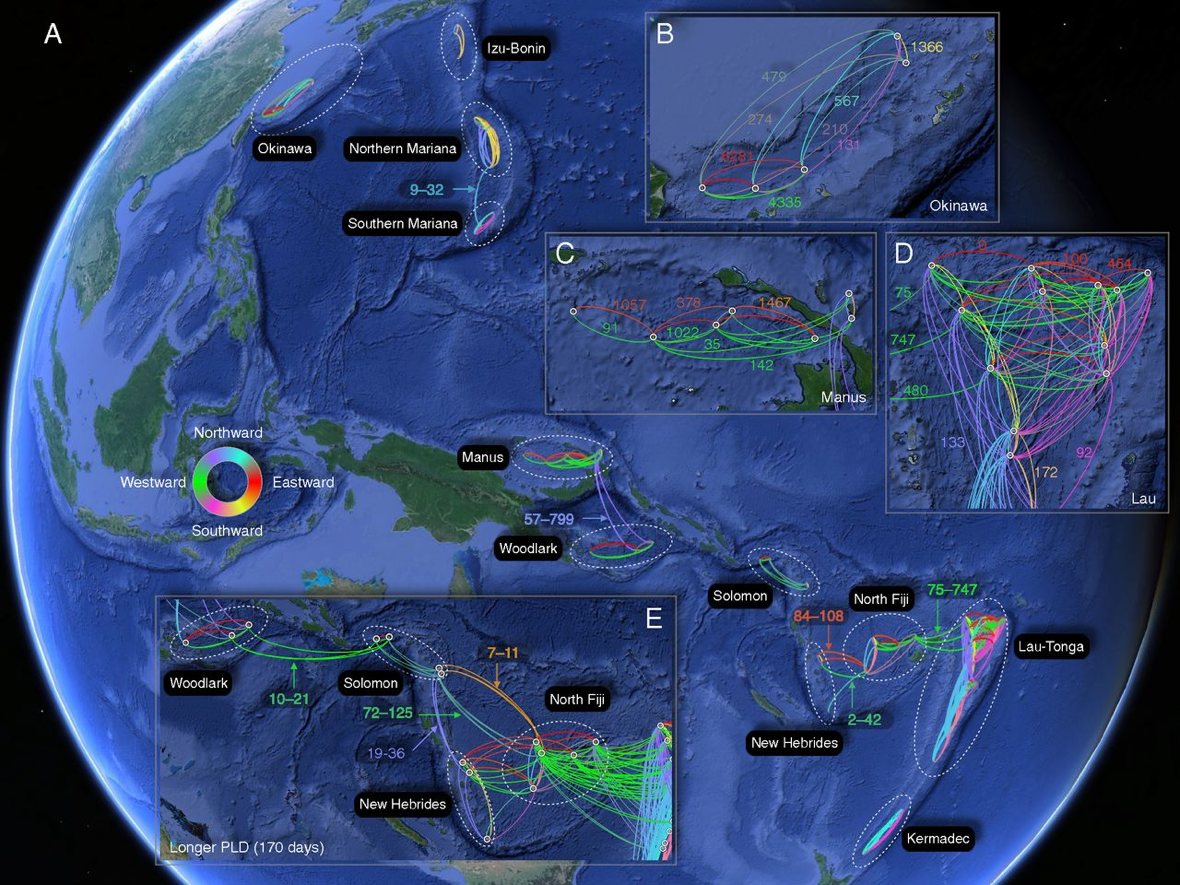 Figure 3: Vent fields within back-arc basins could be well connected, whereas basin-to-basin transport shows dispersal barriers and directionality. (A) Potential larval dispersal from western Pacific vent fields quantified from the biophysical model (lines and numbers). Dispersal depth is assumed to be 1,000 m. PLD is set to 83 d. White ovals show 11 geographically separated regions defined in this study. Line colors show the direction of connections (see the circular diagram in the figure). For an explanation of the numbers, refer to the Fig. 2 legend. Close-up views of the (B) Okinawa Trough, (C) Manus Basin, and (D) Lau Basin suggest that back-arc basins should form well-mixed pools without directionality. (E) The gap between North Fiji and Woodlark could be bridged with above-average PLD (∼twice the mean). When there were multiple vent fields within a 30-km radius, only one of them was randomly selected so as to avoid graphical complications. See Movie S1 for dispersal patterns from all selected vent fields. 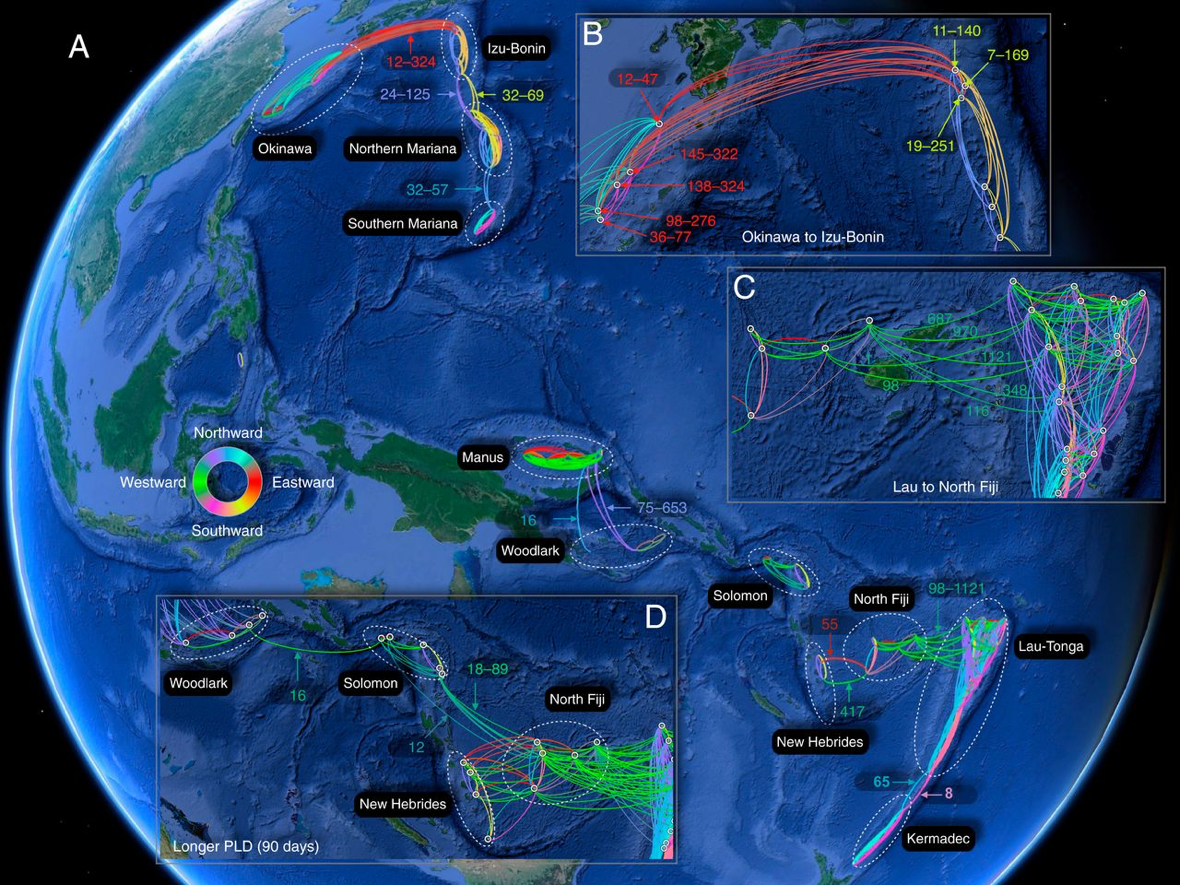 Figure 4: Larval transport among vent fields may be similar regardless of dispersal depth, except for regions affected by the Kuroshio Current. (A) Potential larval dispersal of the western Pacific vent fields for a dispersal depth of 500 m (lines and numbers), where PLD is set to the population mean of 43 d. See the legends of Figs. 2 and 3 for details. Close-up views showing unidirectional transport (B) from Okinawa to Izu-Bonin and (C) from Lau to North Fiji, following the Kuroshio Current and the South Equatorial Current, respectively. The overall pattern does not change much from the 1,000-m case (Fig. 3), with the exception of regions affected by the Kuroshio Current. (D) The southwest Pacific vent complex could be completely interconnected with above-average PLD (∼twice the mean), based on mostly westward transport.

3.2 Genetic differentiation and connectivity of morphological types of the broadcast-spawning coral Galaxea fascicularis in the Nansei Islands, Japan

Population connectivity resulting from larval dispersal is essential for the maintenance or recovery of populations in marine ecosystems, including coral reefs. Studies of species diversity and genetic connectivity within species are essential for the conservation of corals and coral reef ecosystems. We analyzed mitochondrial DNA sequence types and microsatellite genotypes of the broadcast-spawning coral, Galaxea fascicularis, from four regions in the subtropical Nansei Islands in the northwestern Pacific Ocean. Two types (soft and hard types) of nematocyst morphology are known in G. fascicularis and are significantly correlated with the length of a mitochondrial DNA noncoding sequence (soft type: mt-L; hard type: mt-S type). Using microsatellites, significant genetic differentiation was detected between the mitochondrial DNA sequence types in all regions. We also found a third genetic cluster (mt-L+), and this unexpected type may be a cryptic species of Galaxea. High clonal diversity was detected in both mt-L and mt-S types. Significant genetic differentiation, which was found among regions within a given type (FST = 0.009–0.024, all Ps ≤ 0.005 in mt-L; 0.009–0.032, all Ps ≤ 0.01 in mt-S), may result from the shorter larval development than in other broadcast-spawning corals, such as the genus Acropora. Nevertheless, intraspecific genetic diversity and connectivity have been maintained, and with both sexual and asexual reproduction, this species appears to have a potential for the recovery of populations after disturbance. 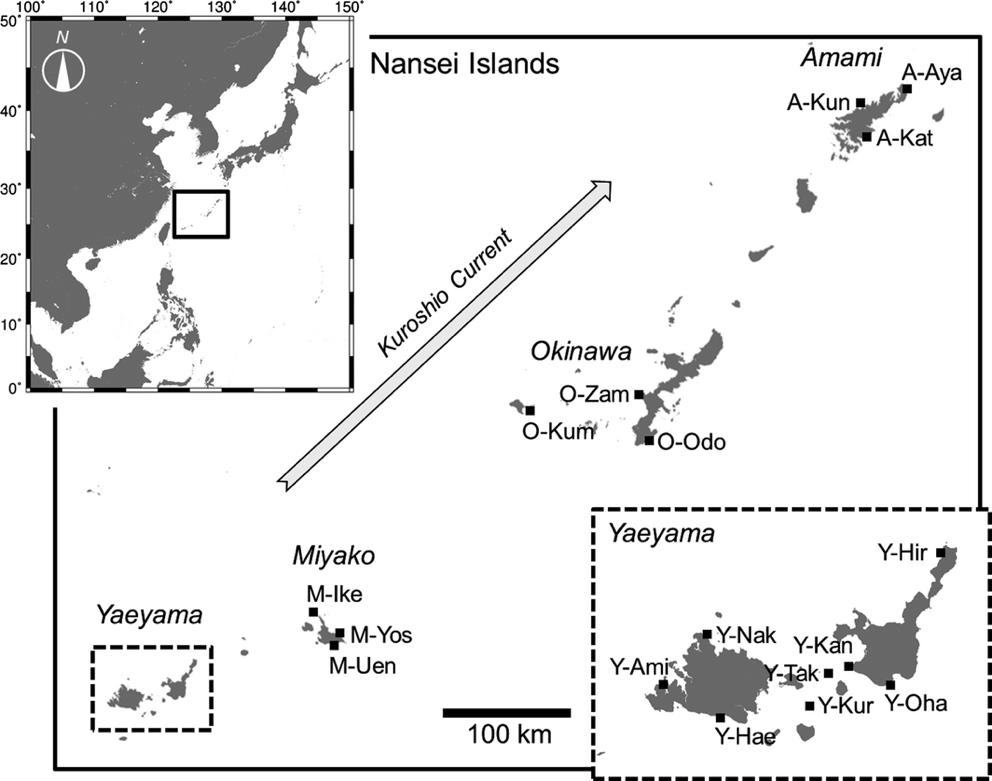 Figure 1: Collection sites for Galaxea fascicularis in the Nansei Islands in southwestern Japan 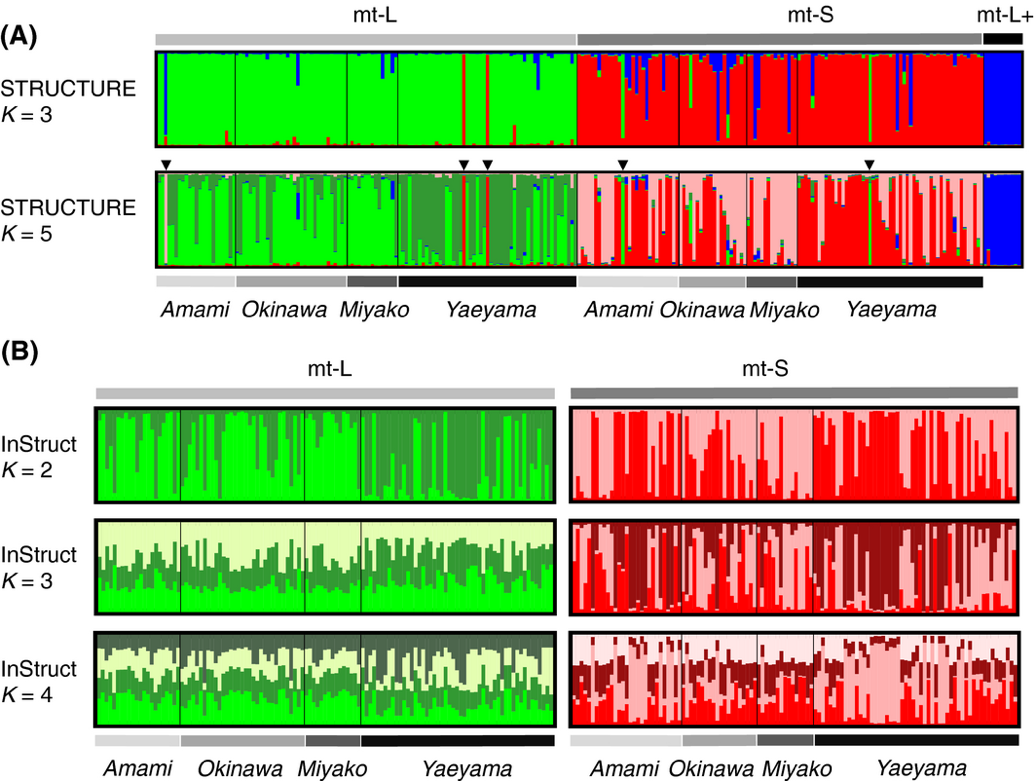 Figure 2: Mitochondrial DNA sequence types are genetically well differentiated. (A) Most multilocus lineages (MLLs) were correctly assigned by Bayesian clustering analysis when the number of clusters was set to 5. These clusters corresponded closely to the three G. fascicularis types. The X-axis shows the probability of MLL membership in each cluster. Using STRUCTURE with the number of groups set to five (K = 5), three MLLs in mt-L and two MLLs in mt-S showed a reversed genetic cluster (see black triangles). (B) Finer genetic differentiation was detected in each type among regions using InStruct instead of STRUCTURE, which is sensitive to high inbreeding coefficients. Using microsatellite markers, STRUCTURE classified five MLLs differently than their mitochondrial DNA sequence types. These MLLs were excluded from analyses with InStruct.

6.1 Workshop: The influence of metapopulation structure and connectivity on the response of coral reefs to climate change and ocean acidification