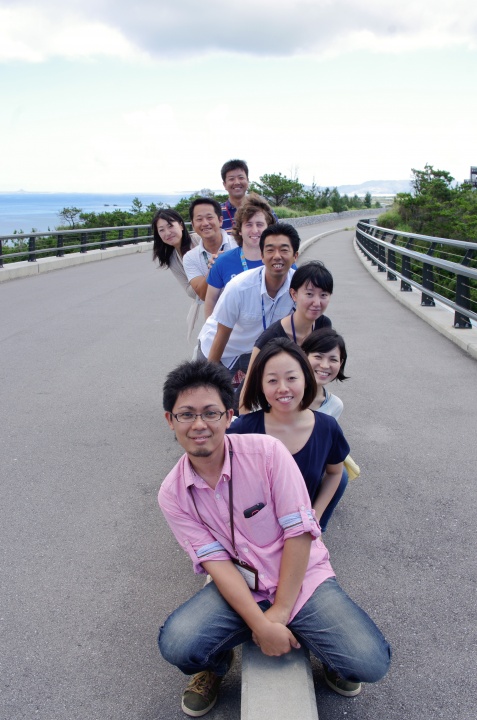 We investigated the coral settlement and community structure in the Central Ryukyu Island, using artificial settlement plates and belt-transect survey method in collaboration with Prof. Sakai (University of the Ryukyus). The amount of settled coral spats varied among the years. The settlement pattern was not associated with the adult coral distribution but was well related to coastal current patterns based on drifter survey. We will continue to survey and observe the settlement pattern to understand the determinant of spatial and temporal variability in settlement patterns.

With the support of Sasagawa Grants for Scientific Research, we started to examine the mechanisms of chronic outbreaks of the crown-of-thorns starfish, Acanthaster planci, along Onna coast. Targeting the importance of new recruitment for the chronic abundant population of the species, we observed distribution of juvenile along Onna coast in Okinawa with local fishermen. This project will be continued with the support of Okinawa Prefecture and TaKaRa Scientific Grants.

We also investigate the number of new recruits of deep-sea benthic animals by setting the artificial settlement plates at several hydrothermal vents at the Okinawa Trough in 2011. The plates were initially planned to retrieve in 2012. However, the sampling was unsuccessful due to typhoons. These insttuments will be retrieved in Nov 2013 and Feb 2014.

We analyzed population structure and reproductive trait of deep-sea limpets in the Okinawa Trough (Lepetodrilus nux) to speculate the planktonic larval dispersal processes. L. nux is an almost-ubiquitaous species in the Okinawa Trough. Lepetodrilus spp. were collected at four different vent sites in the Okinawa Trough at the cruise NT11-20. They shared a major haplotype of L. nux (Fig. 1). From the histological section, both ovary and testis had all four developmental stages of gamets at the same time, therefore, L. nux may produce gametes continuously over a certain period (Fig. 2). From the size frequency distribition, the population structures implied that population could be composed of distinct cohorts, thus recruitment of L. nux may be discontinuous (Fig. 3). This implies that larval recruitment could be affected by change in current directions over time. In summary, these data suggested non-seasonality in reproduction but non-continuity in recruitment, although, generally speaking, continuous reproduction could result in continuous recruitment. The contradiction between reproduction and recruitment patterns in L. nux may be due to complex ocean currents.

Fig. 1. Haplotype network of L. nux from the Okinawa Trough 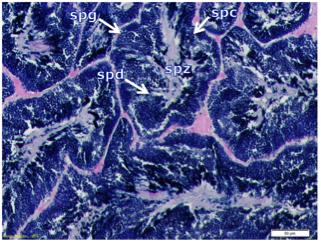 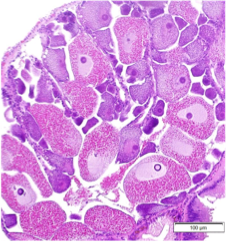 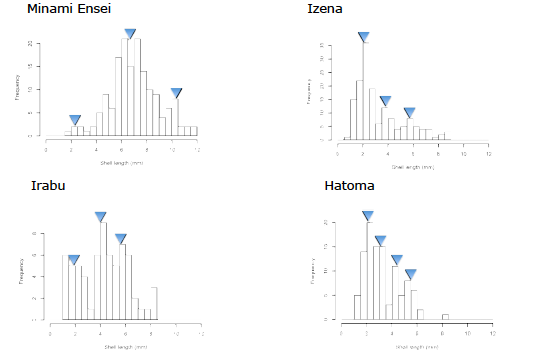