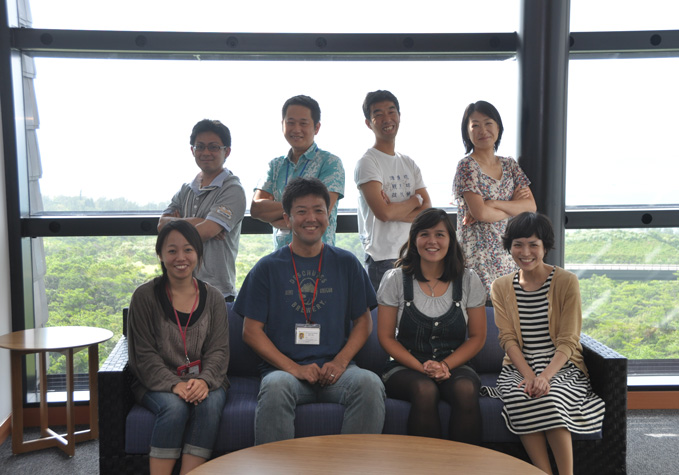 We have been developing high-resolution ocean circulation simulation for Okinawa by using the Regional Ocean Modeling System, a collaboration with Prof. Jim McWilliam’s group (University of California, Los Angeles) and Prof. Uchiyama (Kobe University). We plan to build three-level nested grids for Okinawa region. We finished two grids (12.5 km horizontal resolution and 4 km resolution) and have been evaluating the simulation outputs and available observation data. We will assess larval dispersal patterns with the particle tracking simulation for Okinawa islands and Okinawa trough.

We made an observation along the Kuroshio current with an Argo float deployed near the Kuroshio axis. The float successfully traveled from the west of Kume Island to the south of Tanega-shima (~800 km) while taking 190 vertical profiles of temperature and salinity from the surface to 1000-m deep. The results show how the water properties change from the upstream to the downstream when the Kuroshio across the shallow Tokara Islands region, which may be associated with the vertical mixing due to the bottom friction. High-resolution data of Kuroshio is hard to obtain. We will investigate the result furthermore.

Larval recruitment of benthos in coral reefs and hydrothermal vents

We investigated the coral settlement and community structure in the Central Ryukyu Islands; Okinawa Island, Kerama Islands and Kume Island, using artificial settlement plates (upper photo) and video transect survey methods in collaboration with Prof. Sakai (University of the Ryukuys). The amount of settled coral spats varied among areas. The settlement pattern was not associated with adult coral distribution. It could be due to transport by ocean currents. We will continue to observe settlement pattern of the area to reveal annual variability in the coral settlement. We set the artificial settlement plates at several hydrothermal vents in Okinawa Trough to quantify the new recruits of benthic animals in hydrothermal vents. These plates will be retrieved in 2012. We are also conducting population structure and reproductive trait of deep-sea limpets in Okinawa trough to reveal the breeding season and subsequent larval dispersal periods.