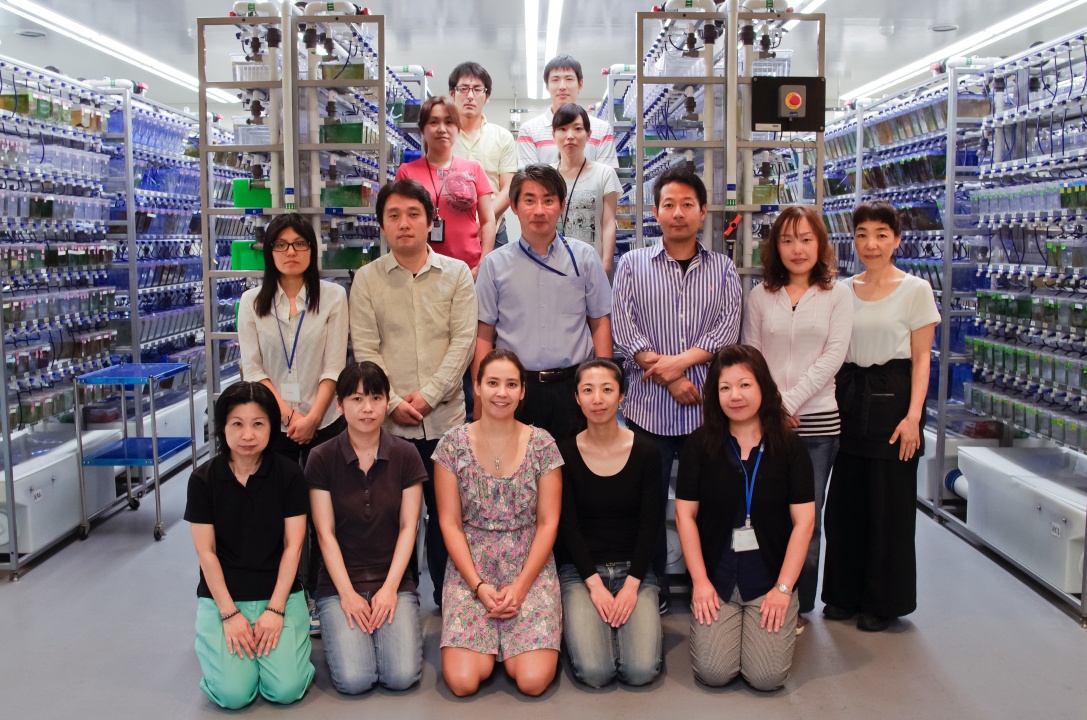 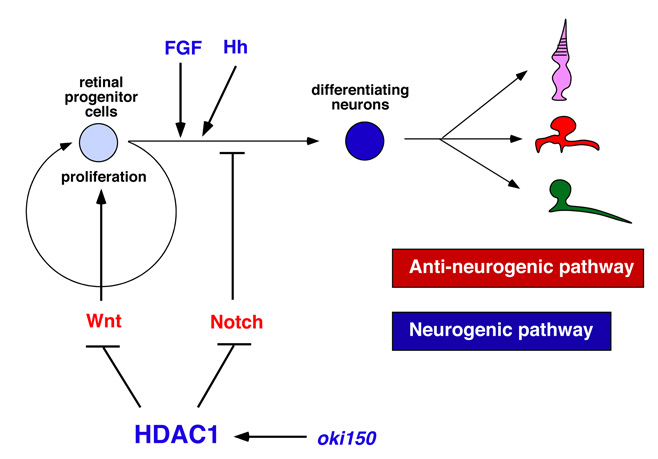 The first step of neurogenesis is the exit from the cell cycle. Previously we showed that the earliest neurogenic marker, ath5 (also designated as atoh7), is initiated in the G2 phase in retinal progenitor cells just prior to the final cell division, which generates two neuronal daughter cells. Thus, it is very likely that the commitment to the retinal neuron is associated with cell-cycle progression. To accurately understand the relationship between cell proliferation and neurogenesis, we visualized cell-cycle phases differentially with fluorescent proteins, using the zebrafish Fucci (fluorescent ubiquitination-based cell cycle indicator) (Sugiyama et al., 2009, Proc Natl Acad Sci USA 106, 20812–20817). In the Fucci system, the cell-cycle dependent expression of two cell-cycle regulators, Geminin and Cdt1, are visualized with fluorescent proteins fused to their regulatory peptide sequences. We generated the zebrafish transgenic line carrying genes encoding mCherry-tagged Geminin and green fluorescent protein (GFP)-tagged Histone 2A. In this transgenic fish, we were able to clearly distinguish three different phases in the developing retina as well as the lens; the G1, S-G2, and M phases (Fig. 3A). Furthermore, we were able to observe chromosome condensation in the M phase (Fig. 3B) and measure the orientation of cell division from in vivo time-lapse imaging data. 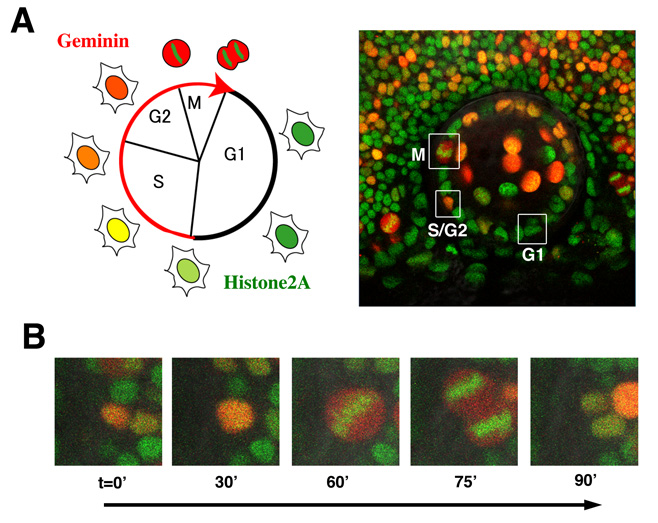 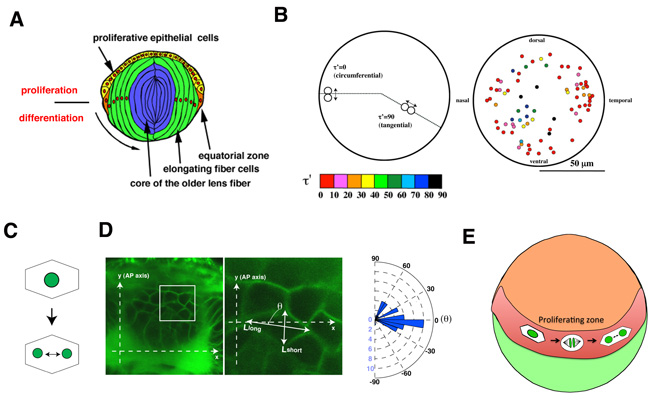 Visual information processed in the retina is transmitted from retinal ganglion cells to the second visual center, called the optic tectum, through retinal axons. In lower vertebrates including fish, all retinal axons project to the contra-lateral side of optic tectum and no ipsi-lateral projection occurs, resulting in the formation of the optic chiasm, where retinal axons from the left and right eyes cross without combining. Our previous study showed that retinal axons are misrouted to the ipsi-lateral side of the optic in zebrafish N-cadherin mutants (Fig. 5A), suggesting a role of cell adhesion in retinal axon guidance at the midline. However, the mechanism underlying retinal axon guidance in crossing on the midline remains to be elucidated.

The molecular mechanism underlying axon guidance at the midline has been studied using commissural neurons in the vertebrate hindbrain and spinal cord as well as in the Drosophila embryonic central nervous system (CNS) (Fig. 5B). It is generally accepted that pre-crossing axons are attracted by a guidance cue emanating from the midline tissue, Netrin, and that the midline tissue expresses not only Netrin but also a repellent cue, Slit. A recent model proposes that pre-crossing axons are insensitive to Slit and only respond to Netrin, resulting in the attraction of their growth cone to the midline. When their growth cone passes over the midline, the sensitivity to Slit is increased, which enables post-crossing axons to leave from the midline. It has been reported that the expression level of a receptor of Slit, namely Roundabout (Robo), is very low in pre-crossing axons but increased in post-crossing axons in Drosophila CNS. In addition, it was reported that one of the Robo family proteins, Robo3, is exclusively expressed in the pre-crossing axons and functions as dominant-negative repressor of Robo1, which is thought to mediate repulsive response instructed by Slit. However, the way in which the responsiveness of Slit is differentially regulated in pre- and post-crossing axons remains unclear. We have established an in vitro culture assay system using commissural axons that reflects the acquisition of Slit responsiveness in post-crossing axons. Using this assay system, we showed that a Robo1-associating deubiquitinase, USP33, is required for the acquisition of Slit responsiveness and crossing of commissural axons over the midline. In 2011, we further revealed that the endocytic trafficking of Robo1 modulates its own expression level on axons as well as the sensitivity of axons to Slit. These findings suggest a new mechanism that modulates axonal responsiveness to guidance cues in crossing the midline of the CNS. 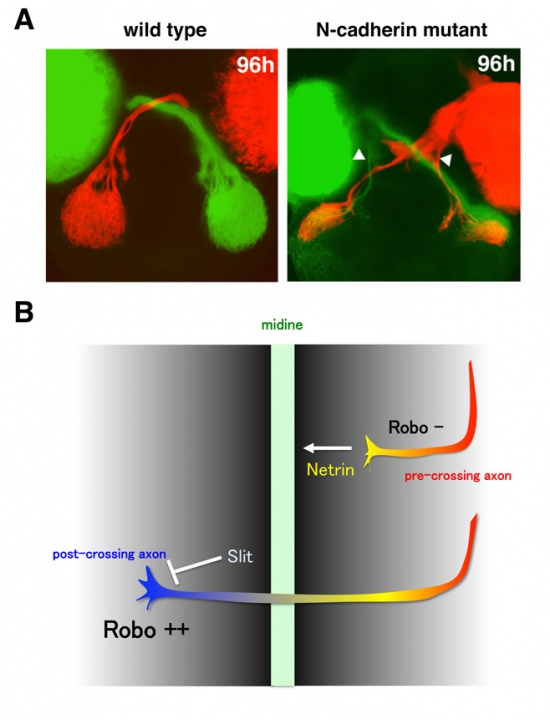 Figure 5: Axon guidance at the midline. (A) Labeling of zebrafish retinal axons with diI (red) and diO (green). Retinal axons from originated from the right (red) and left eye (green) cross without combining each other to project into the contra-lateral optic tectum in wild type. However, some of retinal axons are misrouted to the ipsi-lateral optic tectum in the N-cadherin mutant, suggesting a role of cell adhesion in axon guidance at the midline. (B) Model on the mechanism underlying axon guidance at the midline. Two molecules, Netrin and Slit, are secreted from the midline and function as attractant and repulsive guidance cues, respectively. Because pre-crossing axons lack the Slit receptor Robo, they extend toward the midline in response to Netrin. On the other hand, post-crossing axons express Robo and leave from the midline in response to Slit. However, the mechanism underlying the upregulation of Robo in post-crossing axons remains unclear. 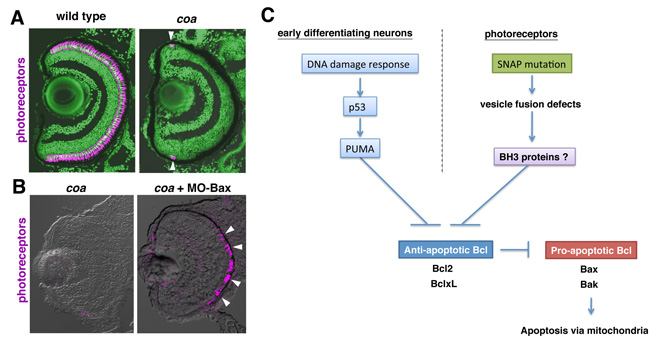