The chemosynthetic species characteristic of hydrothermal vents spend their adult life within a small home range, constrained by the availability of their chemical energy source. Many benthic vent species exhibit a planktonic larval stage. These planktonic larvae may be able to travel great distances in order to colonise other hydrothermal vents. Genetic evidence showing the close relatedness between distant vent populations supports the theory that certain species are able to colonise distant vents while others remain endemic to single vents.

As an inhospitable and almost inaccessible habitat, direct observations of hydrothermal vent species are lacking. By incorporating up-to-date biological parameters into models of ocean circulation we have been able to predict the potential dispersal distance of vent species larvae in a quantitative manor.

Lagrangian measurements of currents are obtained by deploying OPTIMARE NEMO-Floats in the vicinity of hydrothermal vents. These floats would autonomously travel at a specific depth and regularly return to the surface in order to transmit ocean current data via satellite.
In a simulation, model floats were also released at the same location. These model floats were passively transported by simulated currents that were created with the Regional Ocean Modeling System (ROMS). Using this oceanographic data with a Lagrangian probability density function modeling procedure, it is possible to determine the probability that larvae from a given site are transported to another site.

"Dispersal processes in the deep sea show complex eddy motions, changing monthly or more often. (A) Trajectories of deep-sea profiling floats released from Hatoma Knoll (indicated with white arrows) in the Okinawa Trough, illustrating dispersal originating at a vent field within a back-arc basin. Floats were deployed semi-monthly in 2013 and 2014 on dates indicated at the bottom right corner of the figure. Float tracks until March 2015 are shown here. These passively transported floats maintain their depth 1,000 m below the sea surface and return to the surface every 30 d (circles). Positions of each float at the sea surface are connected with cubic splines. The numbers show the cumulative sum of surfacing events, which indicate approximate drift times in months. (B) Close-up view of the same trajectories for the first three surfacing events." - Mitarai et al. 2016

By collecting specimens from the hydrothermal vents themselves it is possible to employ genetic techniques to study population connectivity between vent sites. Using next-generation sequencing we can isolate polymorphic microsatellite loci. These the microsatellite markers will be useful for further population genetic studies to elucidate genetic diversity, differentiation, classification, and evolutionary processes. The extent to which separate populations of a single species share genetic characteristics can be indicative of how connected these populations are. Genetic tools can be a great compliment to modelling methods as they can be used to ground-truth predictions and assess historical connectivity. 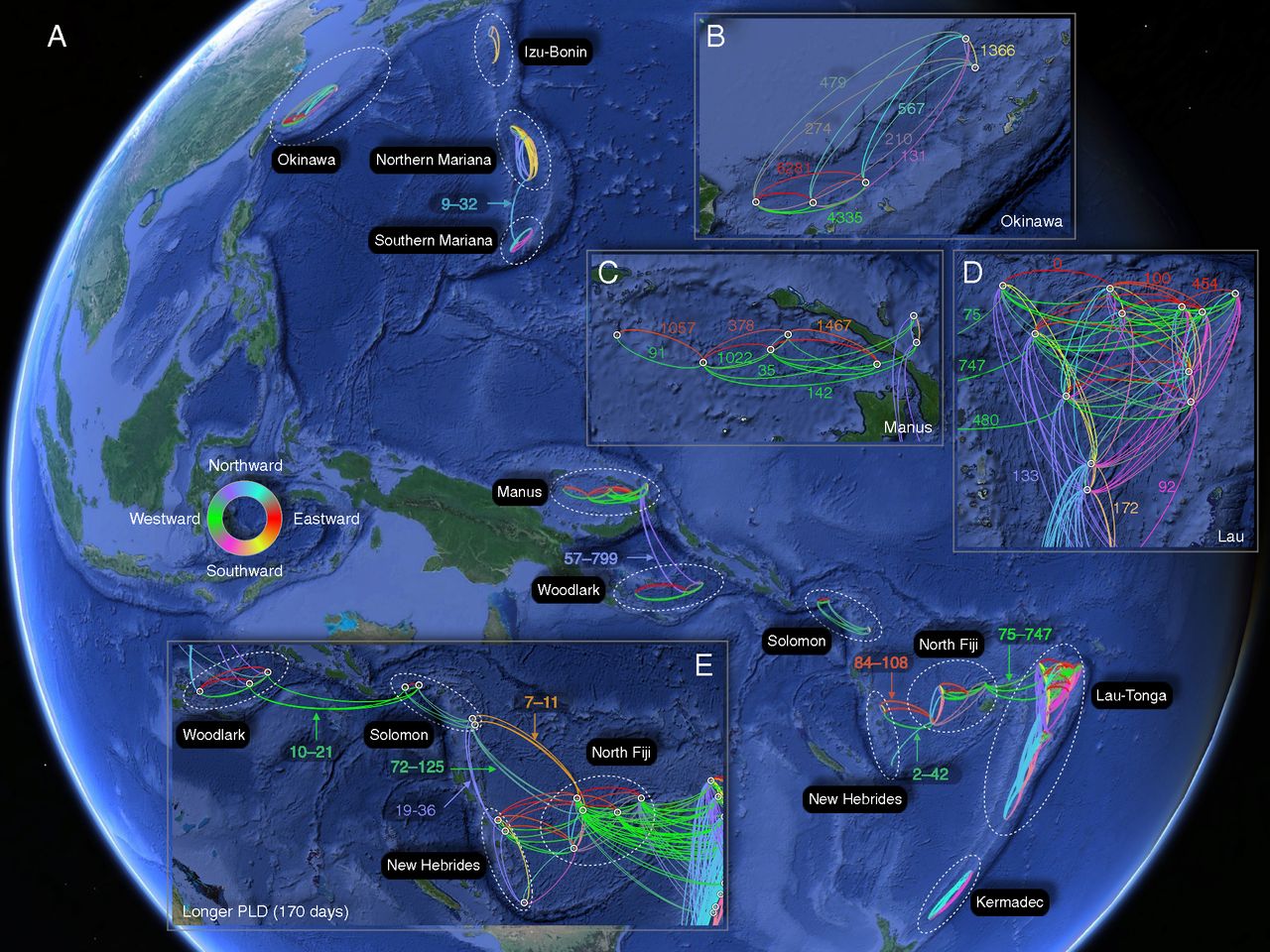 "Vent fields within back-arc basins could be well connected, whereas basin-to-basin transport shows dispersal barriers and directionality. (A) Potential larval dispersal from western Pacific vent fields quantified from the biophysical model (lines and numbers). Dispersal depth is assumed to be 1,000 m. PLD is set to 83 d. White ovals show 11 geographically separated regions defined in this study. Line colors show the direction of connections (see the circular diagram in the figure). For an explanation of the numbers, refer to the Fig. 2 legend. Close-up views of the (B) Okinawa Trough, (C) Manus Basin, and (D) Lau Basin suggest that back-arc basins should form well-mixed pools without directionality. (E) The gap between North Fiji and Woodlark could be bridged with above-average PLD (∼twice the mean). When there were multiple vent fields within a 30-km radius, only one of them was randomly selected so as to avoid graphical complications. See Movie S1 for dispersal patterns from all selected vent fields." - Mitarai et al. 2016