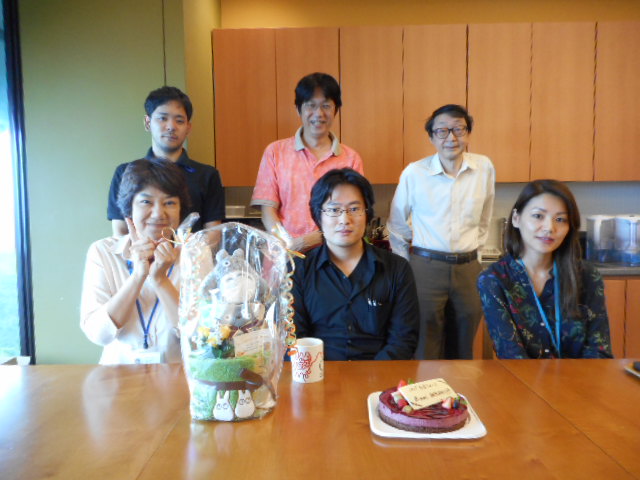 Mathematical and theoretical physics unit studied the subjects related to random matrix theory and conformal field theory. The intersection numbers of the moduli space of spin curves and the conformal bootstrap method for three dimensions are studied. Random matrix theory is applied to biological systems.

The intersection numbers of the moduli space of p spin curves have been studied through the random matrix theory with an external source.  The topological invariants of Gromow-Witten are explicitly obtained for P1 case. When the Riemann surface has a boundary, i.e. hole, the intersection numbers are obtained from Kontsevich-Penner matrix model. We generalized this open intersection numbers for p-spin curves. We published a book for these studies (Brezin and Hikami, SpringerBrief, Mathematical Physics, Vol. 19 (2016)).

This random matrix theory with an external source is also related to Klein surface. We had a workshop MCM2016 for higher Teichmuller space, in which we discussed super Riemann surface, and moduli space of matroid.

We studied critical phenomena in d>2 by the conformal bootstrap, which enables us to explore the fixed point of the renormalization group (RG) i.e. the conformal field theory from certain consistency conditions, the most important being the crossing symmetry and the unitarity. We gave precise estimates for the fractal dimensions of critical geometric objects in d=3, such as the polymer [1.7016(36)] and the Ising graph [1.7346(5)] (giving the world-record precision) obtained respectively in the n=0 limit (as done in RG by de Gennes) and the rank-2 tensor sector at n=1 of the O(n) model. Non-integer values of n are also studied, for which the results may be viewed as a generalization of the continuous family in the Beffara's theorem of the Schram-Loewner evolution in d=2. We found both weak and strong violations of the unitarity happen in the interval 0<n<1, therefore giving an excellent target for the further study deepening our understanding on the fundamental implications of the non-unitarity (non-positive geometry). We also had useful discussions in the focus week of the conformal bootstrap workshop held in GGI, Florence. This project was supported by JSPS KAKENHI No. 16K05491 Grant-in-Aid for Scientific Research (C) and also by No. 15K13540 Grant-in-Aid for Challenging Exploratory Research.

Identifying precursors to large earthquakes has been a difficult, but important challenge both in science and in our society. As the available data have increased drastically in the past decades, there have been steady accumulations of tantalizing evidences that this should be possible as communicated to us through the enlightening discussions with Tetsuo Yamaguchi (Kyushu University) and Takahiro Hatano (Earthquake Research Institute). We studied two directions both using the big data: the one is based on detecting the critical increase of the sensitivity to the tidal-triggering (p-value), and the other is based on machine-learning the inter-time distribution of the low frequency earthquakes (LFEs). The p-value is calculated to introduce a hypothetical 2-dimensional incompressible fluid, in which the power-law of the fully-developed turbulence is observed in a narrow range of the velocity power spectrum; the precursor is found several months before a few large earthquakes as a tiny vortex which may grow via the inverse energy cascade. On the other hand, we focus on the inter-time distribution of the LFEs among the various manifestations of the slow earthquakes, which have recently garnered much attention in the hope of understanding the mechanisms of earthquakes; four homogeneous classes of the LFEs in northern Japan are identified via the cluster analyses in machine-learning the JMA catalogue. Remarkably, the shortest inter-time class (median 23 seconds) is found to show both a significantly-lower seismicity about four months before and a complete quiescence (p-value = 0.0002) of 30 days before the 2011 Great Tohoku Earthquake.

A cell can be considered as a complex universe of various interacting molecules including proteins, RNA and many other transcripts. There are more than 10k proteins in each human cell at the same time. Every cell contains the DNA in their nuclei coding more than 30k genes.

Quadratic differentials, meromorphic tensor fields on Riemann surfaces of some special type, have been studied classically in hyperbolic geometry and complex analysis. Recently it has been clarified that low-dimensional topology including hyperbolic geometry of surfaces is closely related to mathematical physics and integrable systems. This can be illustrated by the topological recursion by Eynard and Orantin generalizing computation of the Weil-Petersson volume of the moduli space of Riemann surfaces, whose influence one can find in various research areas.  Accordingly quadratic differentials are playing some important roles also in mathematical physics and integrable systems. In this workshop, we will read intensively some research papers on the geometry of quadratic differentials and related topics, and will have some talks on original researches. This workshop is supported by a joint project between the OIST and the University of Tokyo.

Abstract:  ADS/CFT correspondance has led to a number of conjectures concerning, conformal invariant, U(N) symmetric 3D field theories with Chern-Simons term for N large. An example is boson-fermion duality. This has prompted a number of calculations to shed extra light on the ADS/CFT correspondance.
We study here the example of gauge invariant fermion matter coupled to a Chern-Simons term. In contrast with previous calculations, which employ the light-cone gauge, we use the more conventional temporal gauge. We calculate several gauge invariant correlation functions. We consider general massive matter and determine the conditions for conformal invariance. We compare massless results with previous calculations, providing a check of gauge independence.
We examine also the possibility of spontaneous breaking of scale invariance and show that this requires the addition of an auxiliary scalar field.
Our method is based on field integral and steepest descent. The saddle point equations involve non-local fields and take the form of a set of integral equations that we solve exactly.