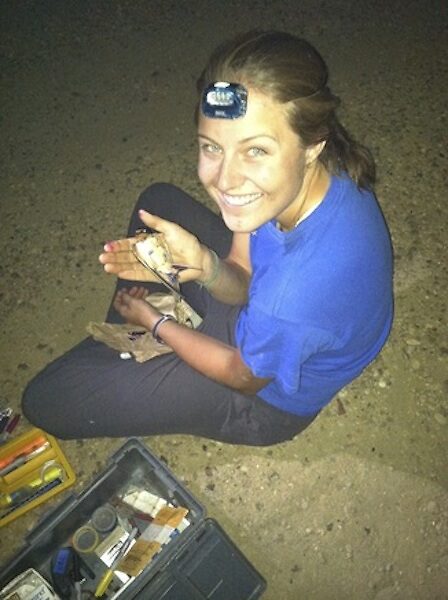 Abstract:
Across many taxa, closely related groups are distinguished by striking variation in sexual traits, yet we don’t have a good understanding of what mechanisms generate this common pattern. Determining what information females gain by using sexual signals to choose mates, and if this information is tied to local ecology, is an important step in understanding these questions. In this talk, I will discuss my research in the barn swallow species complex, where I tested if adaptation to local parasite communities could be driving sexual trait divergence. I conducted comparative field research on three barn swallow subspecies that differ in the relative elaboration of two sexual traits, tail streamer length and plumage color. For each subspecies, I characterized the local parasite community infecting adults and nestlings, I assessed the costs of different parasites infections, and I tested for associations between sexual trait expression and parasites. I found that parasite communities, and their costs, vary significantly across subspecies. Divergent sexual traits in each subspecies signaled information about the costliest parasite(s), thus giving adaptive and locally relevant information to females. Sexual traits were frequently associated with multiple parasites, suggesting that several mechanisms may act in concert within populations to shape sexual signals. Across populations, the same traits were often associated with different parasites, suggesting that these parasite-sexual trait links are quite flexible and can evolve relatively quickly even in closely-related groups. My results suggest that sexual signals are sensitive to the local ecological context and that parasites may play an important role in shaping sexual trait divergence. I will also discuss a series of follow-up experiments that I performed in one of these barn swallow subspecies. By manipulating parasite infections, I was able to determine how parasites influence nestling immunity and survival, as well as parental behavior. I was also able to uncover a behavioral mechanisms linking male sexual trait expression with parasites found in breeding territories. I will end the talk by sharing some of the work I am currently doing with pacific swallows, where I am exploring patterns of divergence and gene flow in host-specific and generalist parasites across the geographic range of their hosts.