Our lab seeks to understand how ecological and evolutionary processes interact to generate and regulate biodiversity across spatiotemporal scales and levels of biological organization.  Living systems are diverse from gene sequences to organismal morphology to communities and ecosystems.  Our goal as biologists is not just to document and catalogue this diversity, but understand the complex interactions and dynamics that generate and sustain biological variation.  In FY2017, our research concentrated in five areas; our project on the evolution of the hyperdiverse ant radiations, our Global Ant Biodiversity Informatics (GABI) project which focuses on compiling analyzing global distributions of past and present ant biodiversity, and systematics, ecology, and evolution of Indo-Pacific ant faunas, the OKEON Churamori Project, and X-ray microCT imaging.

In FY2017, we have continued to maintain and build the GABI dataset so it can be used for different research purposes.  Notably, in this fiscal year we joined large-scale cross-taxon efforts to map and understand the spread of alien species around the world.  These include papers on global alien species hotspots (Dawson et al. 2017, Nature Ecology & Evolution), and the dynamics of emergence (Seebens et al. 2017, PNAS).  The GABI dataset has also been used for other systematics studies (e.g. Sarnat et al. 2017, BJLC, Agavekar et al. 2017, PeerJ).  We received a Kakenhi grant to improve the dataset by large scale georeferencing and species distribution modeling. 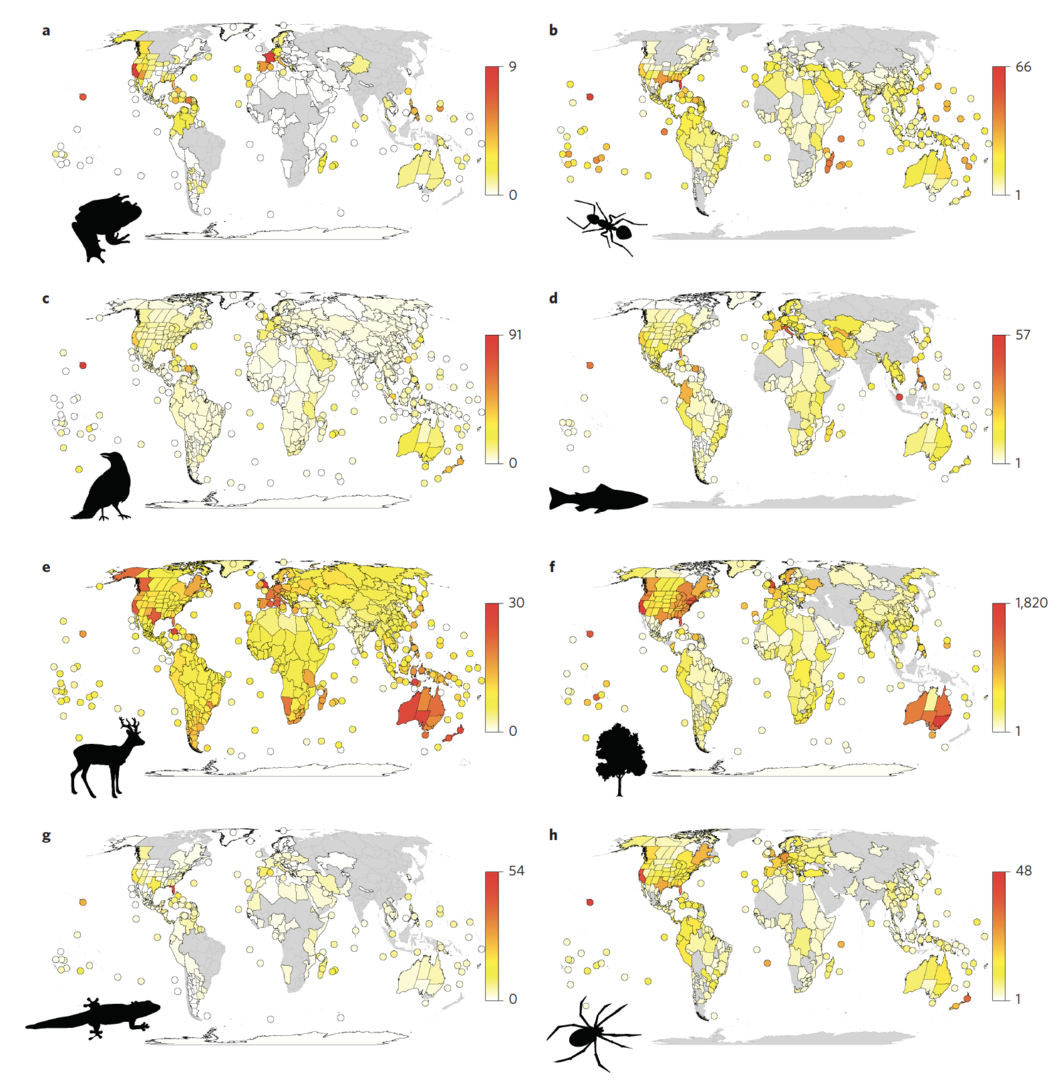 Figure 1: Global hotspots of alien species richness for a broad range of taxa, inferred in Dawson et al. 2017, Nature Ecology and Evolution.  This is an example of the GABI dataset applied to understand macroscale biodiversity patterns.

Over evolutionary time lineages evolve in and out of ecological niches, evolve through morphological spaces, and ranges expand and contract in geographic space. These transitions may not be independent, some phenotypes may be better suited to certain ecological habitats, some habitats may promote dispersal and colonization, and colonization of new geographic areas may lead to ecological niche shifts. These ideas form the basis for integrative hypotheses like the taxon cycle. In collaboration with the Knowles lab at the U. of Michigan, we have a funded project to examine the joint dynamics of these transitions in the famously diverse ant genus Pheidole, which contains over 1000 described species and is the dominant ant genus in many tropical ecosystems worldwide. We reconstructed a new global phylogeny of the genus and used it to analyze its macroevolution and macroecology, with particular attention to the Old World. We also recently initiated new projects on other hyperdiverse ant radiations, namely the genera Strumigenys (in collaboration with Doug Booher) and Tetramorium (led by Staff Scientist Paco Hita Garcia).  Strumigenys is a leaf-litter predator that has evolved a complex trap-jaw mechanism, and we are examining the evolution of this trait in time and space.  In Tetramorium, we are analyzing biogeography, morphological evolution, and transitions between ecological generalism and specialism.  Specimen work and RAD-sequencing for phylogenomics reconstruction is ongoing for these groups.

In FY2017, we made progress on all of the projects above, with phylogenies available for Strumigenys, Tetramorium, and Pheidole.  We published papers on the evolution of ant spines (Sarnat et al. 2017, BJLS), and gave a number of talks on diversification of these genera.

In FY2017, we continued a series of published works on the Indo-Pacific ant faunas, including a new paper on the biogeography of the prenolepis genus group in the Pacific (Matos-Maraví et al., MPE), evolution of Pheidole (Sarnat et al. 2017, BLC), and completed systematic works on the Indian ant fauna (Agavekar et al. 2017, PeerJ).  We also published a paper testing theories for how environment and spatial complexity jointly shape ant communities in mountain environments (Liu et al. 2017, Ecography). 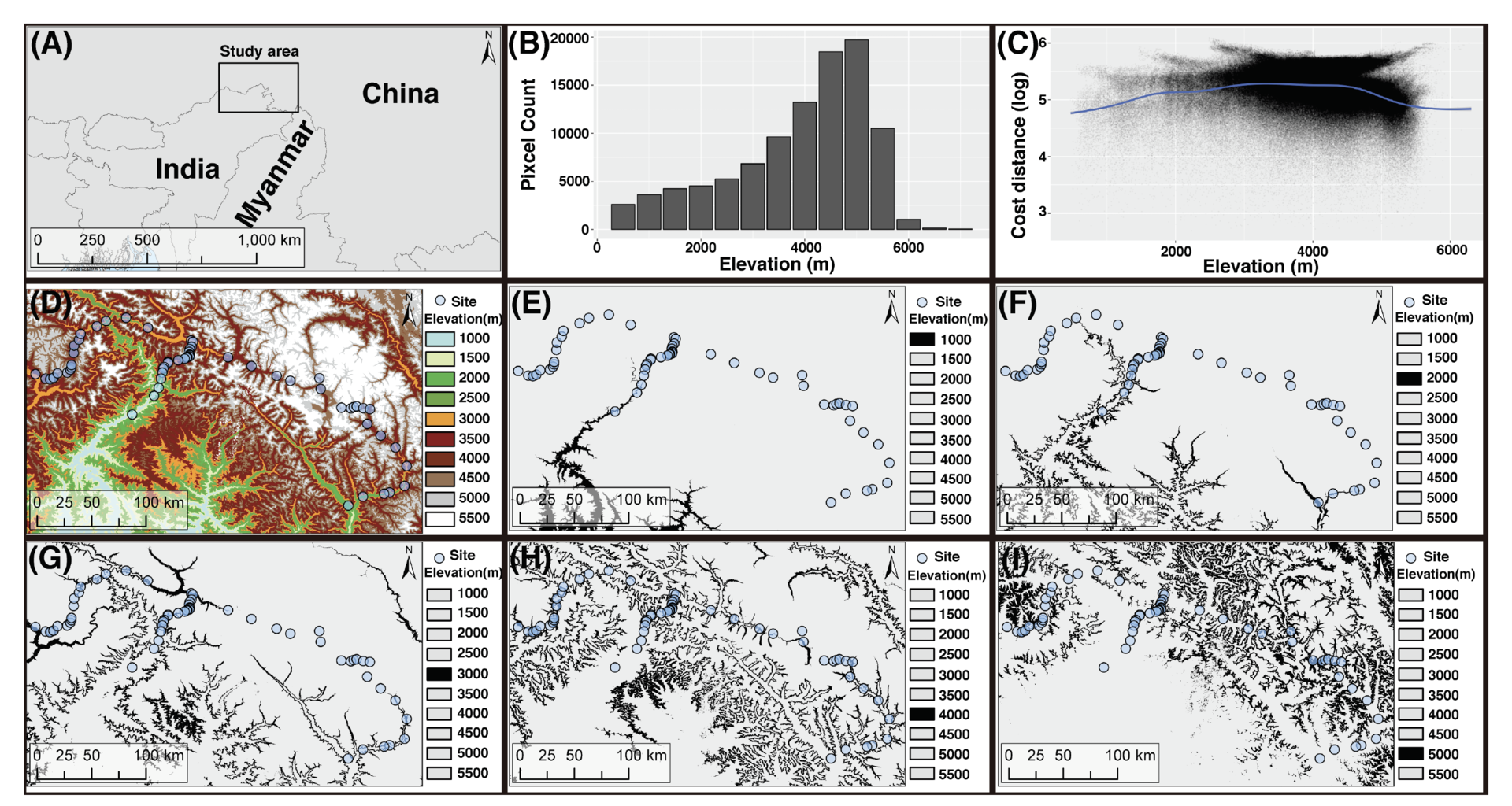 Figure 3: In Liu et al 2017, Ecography, we analyzed the roles of climate and spatial complexity in explaining ant community composition in the Hengduan mountains, China, an understudied biodiversity hotspot.  Notably, we showed that fluvial geomorphology causes connectivity gradients that go with elevation, and tested theory for how these relate to elevational diversity gradients.

After finishing deployment of the malaise traps in previous years, we focused on setting up acoustic and camera trap capabilities in FY2017.  In addition, we published a paper describing the ecoacoustic project (Ross et al. Ecological Research, 2017, Figure 3)  We have also been broadening the activities and partners, we now have over 140 partners in the project.  See the OKEON website for more on our activities.  We completed an external review of the project and received a positive recommendation to continue the project and activity. 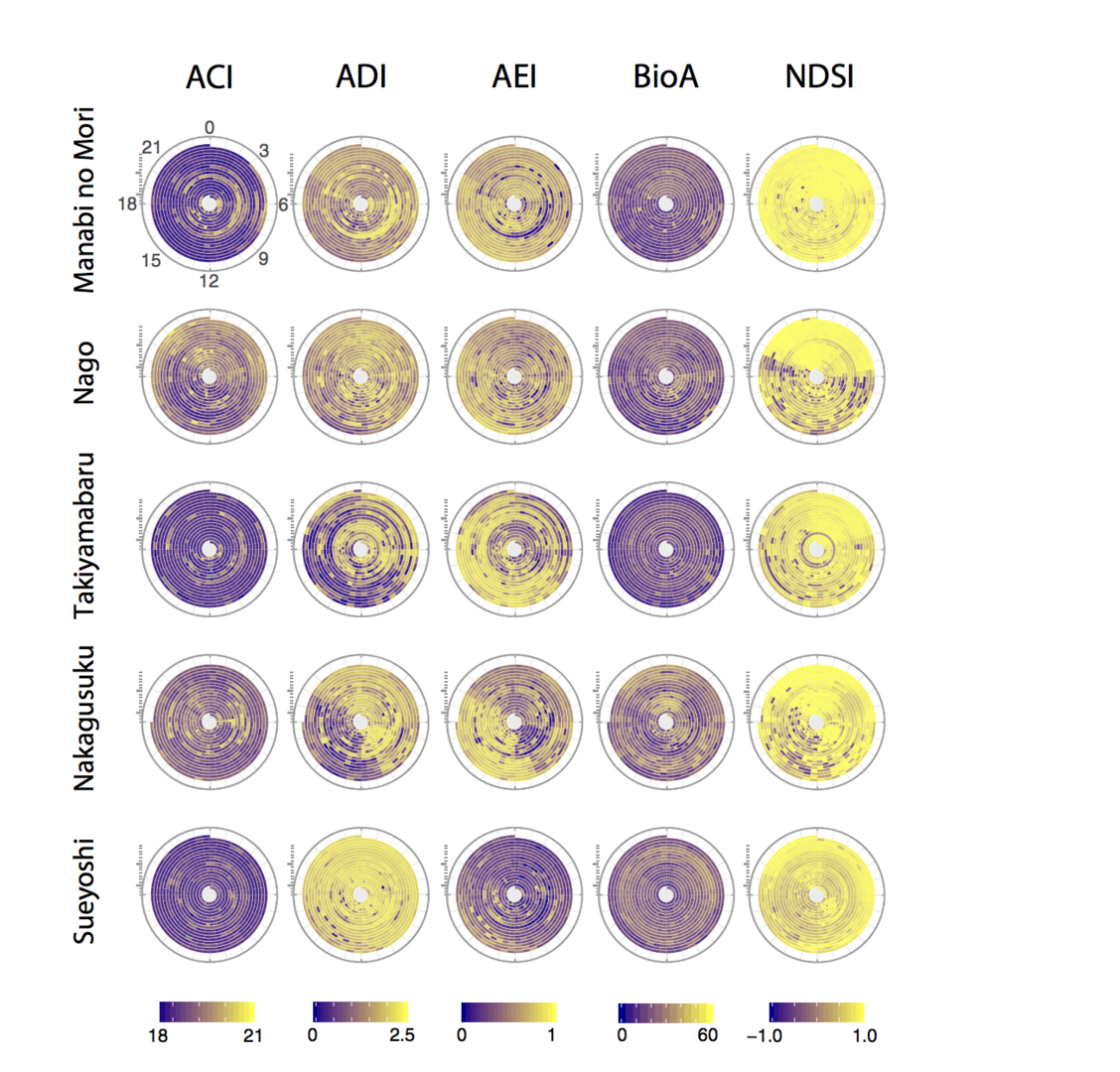 Figure 3:  Comparison of soundscape index dynamics in space and time across a series of sites in Okinawa (Ross et al. 2017, Ecological Research).  This paper won the Ecological Research Award for best paper in the journal during 2017.

Since the earliest biological studies, description and quantification of biological structures has been a basic goal of biology as well as a first step toward deeper understanding of ecological and evolutionary processes.  In Entomology, the primary imaging tools have traditionally been optical microscopy and SEM, which are essential for certain tasks and allow us to see complex structures well. But these are limited in our ability to quantitatively characterize complex shapes, surfaces, and textures.  X-Ray CT has the potential to complement existing tools by providing a digital 3D image of the interior and exterior of the organism.  These images can be manipulated, dissected, measured, and quantified.  We have been developing imaging and post-processing techniques to better quantify the functional morphology of ants, including both external and internal structures.

In FY2017 we continued a series of papers exploring the applications of microCT to ant systematics research (Agavekar et al. 2017, Hita Garcia et al. 2017) and analyzed the evolution of spines in Pheidole using micro-ct(Sarnat et al. 2017).  We are working through generating large 3D datasets on Strumigenys and Malagasy ants which we will be

In March 2017, we held a mini-symposium on the OIST campus entitled “Advances in imaging, quantifying, and understanding the evolution of ant phenotypes”, with participants from around the globe.  The aim of the symposium was to gather a small but selected group of leading researchers interested in the evolution of ant phenotypes with a strong focus on the use of x-ray microtomography (micro-CT). Our list of speakers covered experts in the fields of molecular and morphological systematics, anatomy, functional morphology, comparative morphology, adaptive trait evolution, reproductive biology, linear and geometric morphometrics, and paleontology. All invitees gave outstanding talks and presented published or ongoing research in great detail and with beautiful 2D or 3D illustrations and/or videos.

Some talks provided conceptual and technical backgrounds and perspectives of how to use micro-CT for ant morphology, how to better integrate next-generation phenomics into systematics, palaeontology, and evolutionary biology, and how to use micro-CT data and downstream 3D applications for education and public outreach. 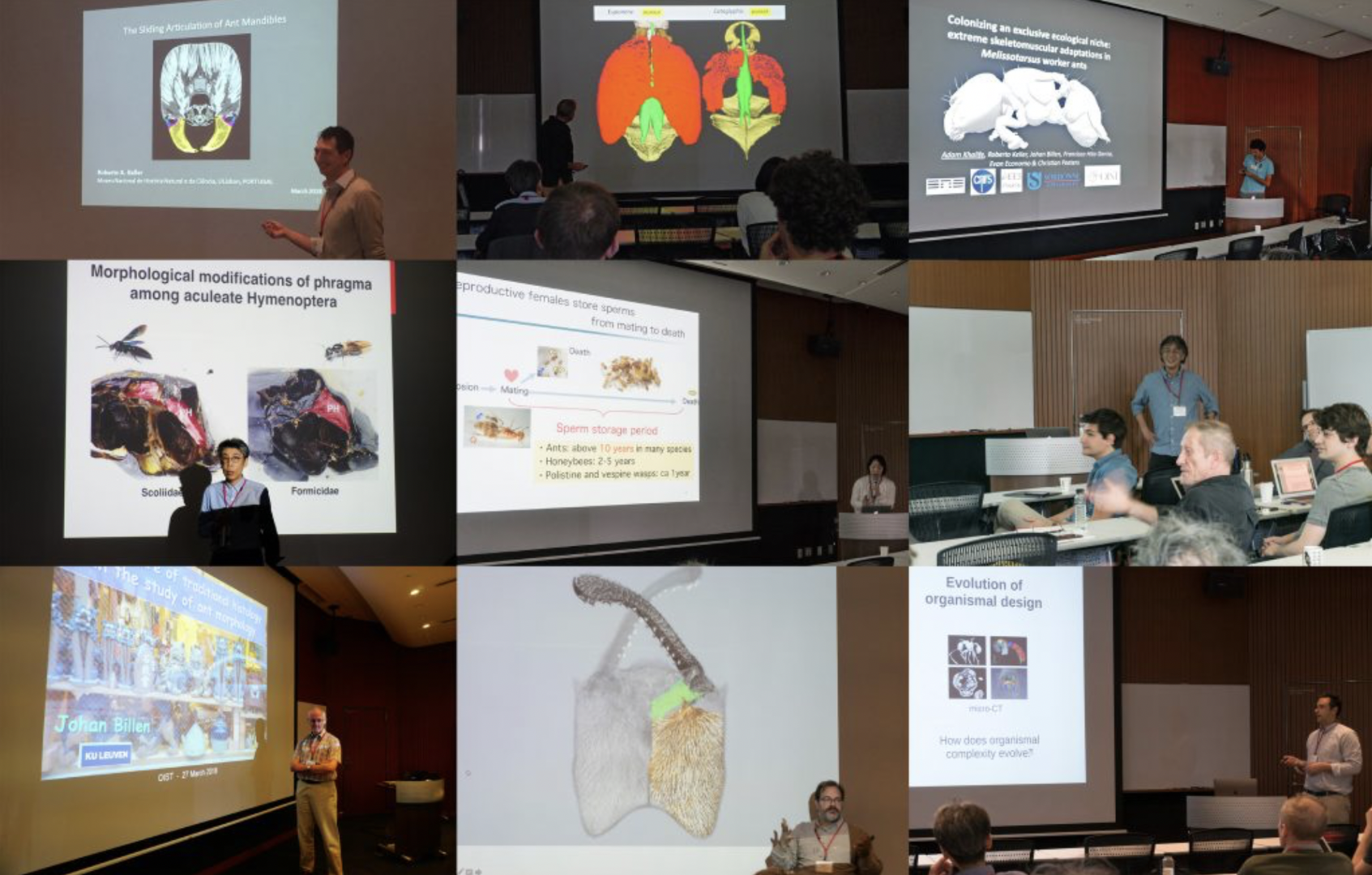 A strong focus of the symposium was the use of micro-CT for ant functional morphology, biomechanics, and the evolution of complex phenotypes. Some guests also showed recent advances in histology-based anatomy and reproductive biology, and shared ideas of how to combine traditional histology with modern 3D imaging technologies, such as micro-CT.

We also had a session focusing on the use of 2D linear and 3D geometric morphometrics and their application for ant phylogenetics, taxonomy, trait evolution, and more generally how to use large 3D phenotypical datasets to answer questions in evolutionary biology.

One afternoon was completely devoted to practical demonstrations of how to use 3D data. Our lab shared how we scan data post-processing, 3D virtual reconstructions, 3D animations, virtual/augmented reality, 3D printing. It was useful for sharing knowledge of methodology, and stimulating ideas for future directions and applications.

The three-day symposium provided ample opportunities for socializing and chatting about on-going and potential collaborations, discussions about methods and research results, as well as brainstorming about future directions for the field

6.1 Seminars, “When individuals matter: Biodiversity and the impacts of logging in Borneo”

6.3 Seminar, “Insects and their multi-trophic interactions in natural and experimental forests”

6.12 Seminar, “Rapid evolution of a costly form of parasite resistance in threespine stickleback”

6.13 Seminar, “Global change and the stability of ecosystems”