Our lab seeks to understand how ecological and evolutionary processes interact to generate and regulate biodiversity across spatiotemporal scales and levels of biological organization.  Living systems are diverse from gene sequences to organismal morphology to communities and ecosystems.  Our goal as biologists is not just to document and catalogue this diversity, but understand the complex interactions and dynamics that generate and sustain biological variation.  In FY2016, our research concentrated in four areas; our project on the evolution of the hyperdiverse ant radiations, our Global Ant Biodiversity Informatics (GABI) project which focuses on compiling analyzing global distributions of past and present ant biodiversity, and systematics, ecology, and evolution of Indo-Pacific ant faunas, and the OKEON Chura-Mori Project.

In FY2016 we have continued to grow the dataset, which now constitutes nearly 2 million records. We published a paper describing the efforts (Guenard et al. 2017), and other papers using the data for biogeographic analysis (Wepfer et al. 2016, Economo et al. 2017), and several other analyses are submitted for publication. 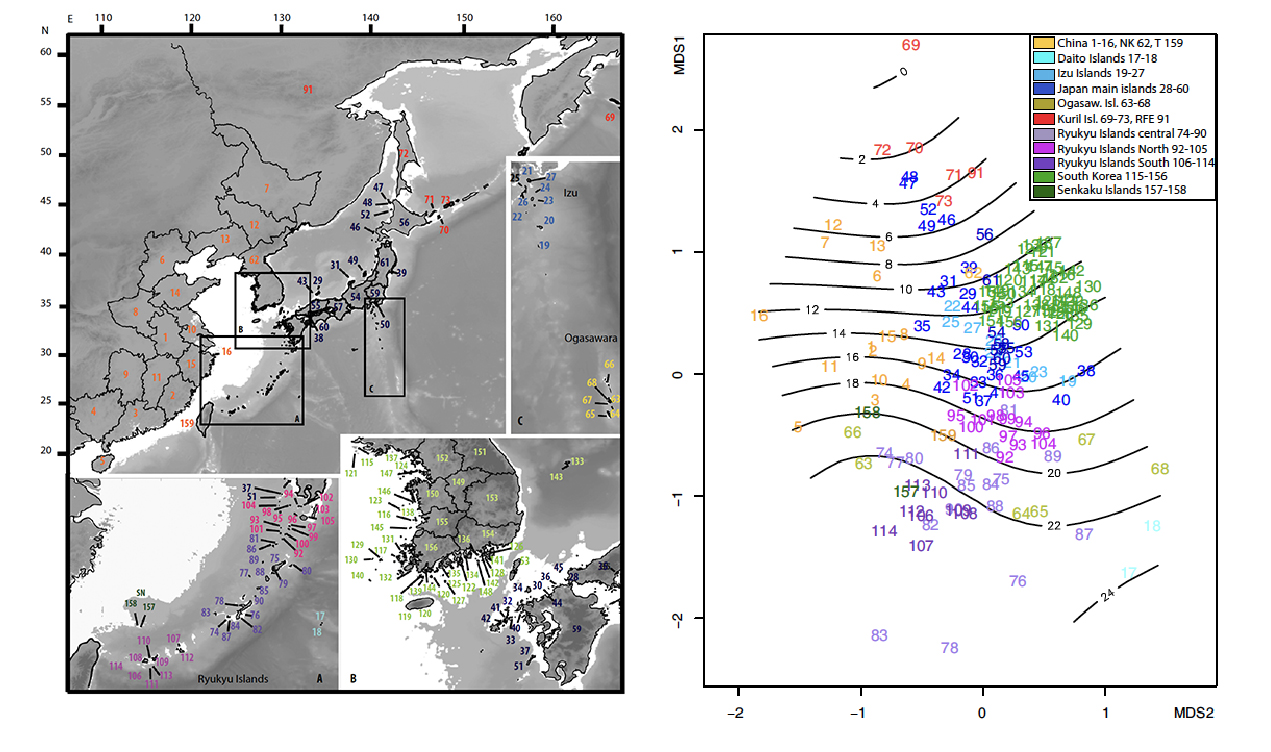 Figure 2: One example of the use of GABI data for biogeographic analysis.  Wepfer et al. (2016, J. Biogeography) analyzed community composition among regions and islands in East Asia.  We found that historical land connections at the last glacial maximum predicted community similarity better than recent land connections. The right anel reflects a nonmetric multidimensional scaling analysis of community composition of the areas in the left panel.

Over evolutionary time lineages evolve in and out of ecological niches, evolve through morphological spaces, and ranges expand and contract in geographic space. These transitions may not be independent, some phenotypes may be better suited to certain ecological habitats, some habitats may promote dispersal and colonization, and colonization of new geographic areas may lead to ecological niche shifts. These ideas form the basis for integrative hypotheses like the taxon cycle. In collaboration with the Knowles lab at the U. of Michigan, we have a funded project to examine the joint dynamics of these transitions in the famously diverse ant genus Pheidole, which contains over 1000 described species and is the dominant ant genus in many tropical ecosystems worldwide. We reconstructed reconstructed a new global phylogeny of the genus and used it to analyze its macroevolution and macroecology, with particular attention to the Old World. We also recently initiated new projects on other hyperdiverse ant radiations, namely the genera Strumigenys (in collaboration with Doug Booher) and Tetramorium (led by Staff Scientist Paco Hita Garcia).  Strumigenys is a leaf-litter predator that has evolved a complex trap-jaw mechanism, and we are examining the evolution of this trait in time and space.  In Tetramorium, we are analyzing biogeography, morphological evolution, and transitions between ecological generalism and specialism.  Specimen work and RAD-sequencing for phylogenomics reconstruction is ongoing for these groups.

In FY2016, we published novel quantitative methods for testing complex biogeographic theory such as the taxon cycle (Sukumaran et al. 2016).  We also published several taxonomic works on interesting spinescent groups in New Guinea (Sarnat et al 2016, Fischer et al 2016).  One of those species, Pheidole drogon, has been selected as one of the top 10 species of 2017.

Ants are among the most ubiquitous and ecologically dominant animal groups. Over millions of years, ant biodiversity has evolved and dispersed from Asia and Australia through the vast network of Pacific islands.  More recently, humans have unintentionally introduced many species from around the globe into the Pacific. We seek to understand the historical and contemporary processes that regulate ant biodiversity over time.  In FY2016, we continued a series of published works on the Indo-Pacific ant faunas, including a new paper on the biogeography of ant species-area curves in the Pacific (Economo et al. 2017) .  We analyzed taxonomoic, functional, and phylogenetic ant diversity in rubber plantations in tropical China (Liu et al 2016, Figure 2). In addition, we published a new method for the statistical analysis of island communities (Lasky et al. 2017). We also continued making progress on our high-throughput RAD-sequencing of the Fijian ant fauna.  We expect to complete this dataset in FY2017. 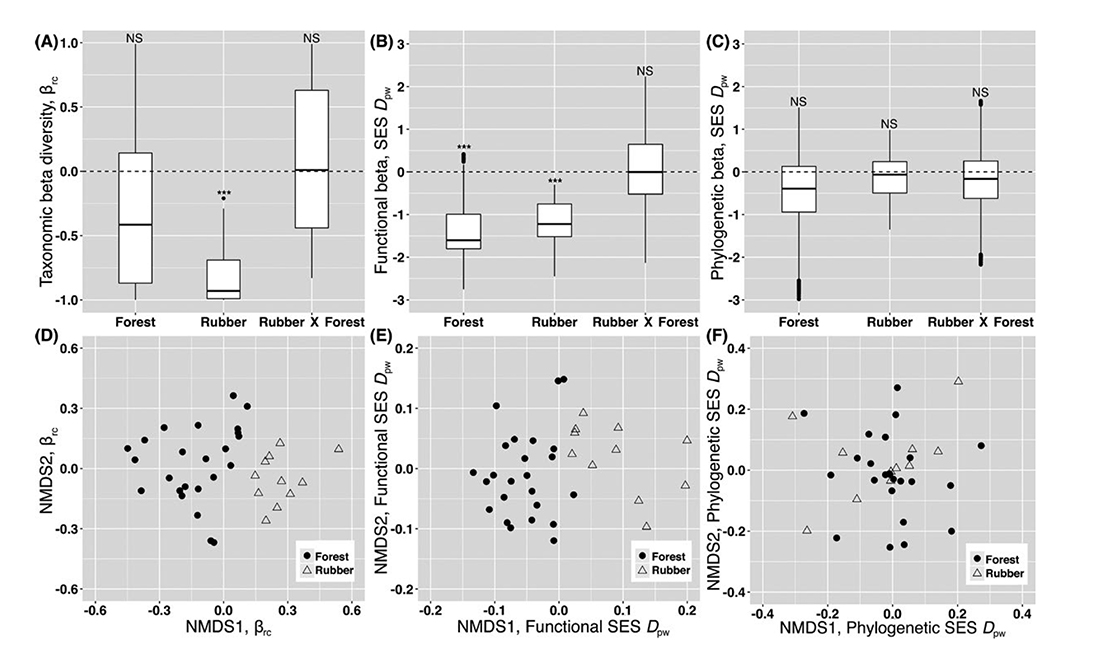 After the establishment of 24 sites at the end of FY2015, FY2016 was our first full year of arthropod sampling at all the sites.  We also finished deployment of the whole network of camera traps and acoustic devices.  We have also been broadening the activities and partners, we now have over 80 partners in the project.  See the OKEON website for more on our activities.

Since the earliest biological studies, description and quantification of biological structures has been a basic goal of biology as well as a first step toward deeper understanding of ecological and evolutionary processes.  In Entomology, the primary imaging tools have traditionally been optical microscopy and SEM, which are essential for certain tasks and allow us to see complex structures well. But these are limited in our ability to quantitatively characterize complex shapes, surfaces, and textures.  X-Ray CT has the potential to complement existing tools by providing a digital 3D image of the interior and exterior of the organism.  These images can be manipulated, dissected, measured, and quantified.  We have been developing imaging and post-processing techniques to better quantify the functional morphology of ants, including both external and internal structures. In FY2016 we published a series of papers exploring the applications of microCT to ant systematics research (Sarnat et al. 2016, Fischer et al. 2016, Hita Garcia et al. 2017), and have initiated new collaborative projects on the evolution of ant functional morphology.

Figure 4:  X-Ray microtomography of ant species.  Left, Pheidole drogon, a new species recently described by our lab (Sarnat et al. 2016) that was chosen as one of the top 10 new species of the year by SUNY-ESF.  Right, a new species of Terataner (Hita Garcia et al. 2017) , used as a case study to highlight the potential of the technology for ant biology and systematics.

4.2 Seminar, “From Cretaceous to community: Understanding the assembly and diversity of a regional biota”

4.3 Seminar, “When individuals matter: Biodiversity and the impacts of logging in Borneo”