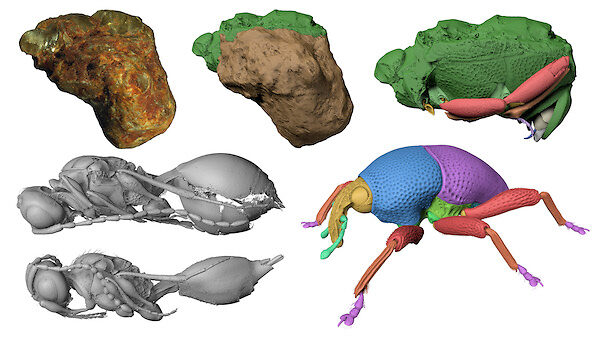 Abstract:
Synchrotron-based X-ray imaging has become an established method for the examination of small animals and X-ray microtomography in particular is an important tool for non-destructive 3D imaging of insects. The imaging station of the KIT Synchrotron Radiation Facility is optimized for fast X-ray imaging and includes a high-speed detector system and a sample change robot. The setup facilitates high-throughput experiments and 3D digitization of large numbers of insects in a single experiment.
Despite faster acquisition times, image analysis is often still challenging and time-consuming. Especially a manual segmentation of tomographic volumes is extensive and the results often show unwanted artifacts. By employing semi-automated tools, image analysis can be accelerated and improved.
Recent experiments demonstrate the value of fast X-ray imaging for the digitization and 3D analysis of both extant and fossil insects. Interactive 3D reconstructions based on tomography data allowed analyzing motion systems and the elytra of beetles proved to be interesting role models for biomimetic design. When studying 34-million-year-old mineralized insects from the fissure fillings of the Quercy region in France, we found that these fossils might contain well-preserved morphological characters, allowing species descriptions and phylogenetic analyses as done for extant specimens. A first study revealed the detailed anatomy of a hister beetle inside a stone matrix. In the following, we examined more than 1,500 fly pupae from the same locality and identified exceptionally preserved parasitoid wasps, providing both morphological and ecological data.