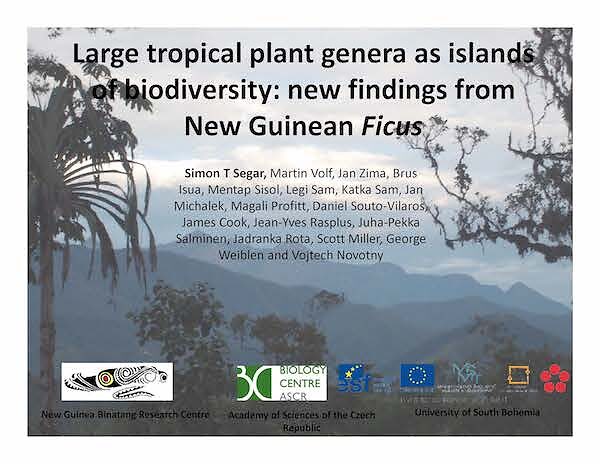 Biodiversity and Biocomplexity (Economo) Unit would like to invite you to a seminar by Dr. Simon Segar.

A large proportion of tropical diversity comprises ecologically dominant and species rich plant genera and their associated arthropod fauna. These genera have had a prominent role in understanding the generation of extant biodiversity. One of the most species rich plant genera in the Asia-Pacific region is Ficus, which has its centre of diversity on the island of Papua New Guinea. Here we summarise some recent research using Ficus as a model system. We build on earlier studies of herbivory in the genus by using detailed plant chemistry and insect data in a phylogenetic context to explain the distribution of insect herbivores across a local community of Ficus species. Overall herbivore community structure is significantly influenced by both Ficus phylogeny and toxic defences such as cysteine protease activity, oxidizing polyphenols and alkaloids. Analyses of phylogenetic signal and trait diversification suggest that individual Ficus species are defended by a suite of phylogenetically conserved and labile traits. These results suggest that herbivory imposes disruptive selection on close relatives but that conserved traits are important in defence. We extend the study of secondary metabolites to a 2,500 m long elevational transect along the slopes of Mt Wilhelm, demonstrating contrasting elevational trends between alkaloids and polyphenols as well as between key compound groups within each class. We relate these elevational trends to detailed data on insect food web structure and diversity. Finally we present findings from an ongoing research project focusing on speciation by elevation in several Ficus species and their pollinating wasps. We find strong barriers to geneflow at mid-elevations potentially mediated by climatic and biological limitations to pollinator wasp dispersal (e.g. through temperature and Wolbachia infection status). We combine genetic, behavioral and chemical data to propose a mechanism for speciation in the genus, with a central role for mountains.