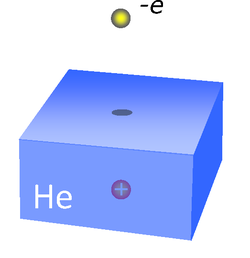 Electrons trapped on the surface of liquid helium present an extremely clean two-dimensional (2D) electron system. The quantized bound states of the electron orbtial motion perpendicular to the liquid surface (the Rydberg states) are formed due to interaction of an electron with its image charge in the liquid. 2D electrons on helium present a unique counterpart of two-dimensional electron gases (2DEGs) in semiconductors and have an unprecedently high mobility. Therefore, the transport propeties of this system, in particular under microwave irradiation, and comparison with those in semiconductors is of great interest.

When 2D electrons are subject to a magnetic field applied perpendicular to the 2D plane, the energy of their lateral motion also becomes quantized into a set of equally-spaced Landau levels. Facinating transport phenomena occur when transtions beween different Landau levels are excited by externally applied microwave radiation. In particular, it leads to the Microwave-Induced Resistance Oscillations (MIRO) and Zero-Resistance States (ZRS), which were first observed in 2DEGs formed in GaAs/AlGaAs heterostructuers. Some outstanding open questions sill exist and prevent complete understanding of these phenomena in semiconductors, for example immunity of MIRO to the direction of circular polarization of radiation.

Since electrons on helium present an extremely clean counterpart of 2DEG in semiconductors, we study facinating phenomena of MIRO and ZRS in this system to resolve those open questions. In our experiments, we employ transport measurements using a capacitive-coupling technique, as well as microwave optical cavities to enhance effect of radiation.

In our recent experiment, we have observed and studied the thermoelectric (Seebeck) effect in electrons on helium heated by the resonant microwave radiation. The heating results in a lateral flow of electrons, which we were able to detect by employing a segmented electrode configuration. We show that the theoretically estimeated ZT can reach values much larger than unity in this system, due to fast electron-electron collisions and violation of the Weidemann-Franz law.

I. Kostylev, A. A. Zadorozhko, M. Hatifi, and D. Konstantinov