In the beginning of FY2021, we said farwell to Dr. Yuimaru Kubu (and his entire team) who took an independent PI position in the Science and Technology Group at OIST to lead his research on color centers in diamond. Since FY2021, our group has completely concentrated on the research on the electron-on-helium system, in particlar its implementaion for quantum computing.

During FY2021, we said farwell to Dr. Oleksiy Zadorozhko, who took a research staff position at Chalmers University, and to Jason Ball who sucessfully defended his PhD degree and moved to USA to work in a quantum computing startup compony Bleximo Co. We also wellcomed two new postdocs from Russia, Dr. Kirill Shulga and Dr. Mikhail (Misha) Belianchikov.

3.1 Spin-state coherence of an electron trapped over a superfluid helium substrate (Denis Konstantinov, in collaboration with Erika Kawakami from RIKEN and Shan Zoe from OIST)

Our idea of spin-state implementation of electrons on helium for quantum computing is centered on the artifical spin-orbit coupling to the Rydberg states of the electron motion perpendicular to the liquid helium surface. Such coupling can be introduced by a sufficiently strong gradient of an applied magentic field. For example, we envision to trap an individual electron by an electrostatic potential applied to a cylindrical magnetized post covered by superfluid helium. Our FEM simulations show that for a typical supefluid helium depth of 500 nm and a post diameter of 100 nm (see Fig. 1(a)), a sufficient magentic field gradient can be achieved to cause the Zeeman splitting difference between electrons occupying the two lowest Rydberg states to be about 140 MHz (see Fig. 1(b)), which by far exceeds the intrinsic linewidth of the Rydbreg states of about 1-10 MHz.

It is clear that the coupling of spin states to the Rydberg states unavoidably affects the spin coherence. However, it is crucial to maintain the latter to be sufficiantly long in order for the spin-qubit operations to be useful. We carried out the second-order perturbation theory calculations and established that the spin relaxation time due to the second-order ripplon-assisted spin-flip transtions exceeds 100 ms, while the spin dephasing exceeds 100 s for the magentic field gradient presented in Fig. 1.  This result demonstrates spins of such trapped electrons to be a potentially viable resource for quantum computing.

3.2 Solution of Landau-Zener-Stuckelberg problem for readout of the Rydberg states of electrons on helium (Denis Konstantinov, in collaboration with Erika Kawakami from RIKEN)

Landau-Zener-Stuckelberg (LZS) problem is formulated for a generic two-level quatum system (TLS) subect to a harmonic driving through an avoided crossing between the system's energy levels (link). In particular, it produces a periodic component of the excited state population of TLS, which is relevant for the proposed readout of the Rydberg states of electrons on liquid helium by the capacitance spectroscopy method (link). Thus, it is important to find solution of the LZS problem for the whole set of relevant experimental parameters, such as the Rabi frequency ω1, resonance detuning Δω0, driving amplitude A, as well as the driving frequency ωm.

We derived a simple method to solve LZS problem and find all components of the time-dependent excited state population ρ22 as a function of the above parameters by introducing the Fourier series expansion of the density matrix elements, which reduces the problem to a set of readily solvable linear equations. Fig. 2 shows an example of soultions for the in-phase component of ρ22 with respect to the harmonic driving for three different driving frequencies  ωm. The advatage of our method is that it can be readily extended to the case of an ensamble of TLS with an inhomogenous broadening of their transtion frequency, which is most relevant for an ensable of electrons on liquid helium. 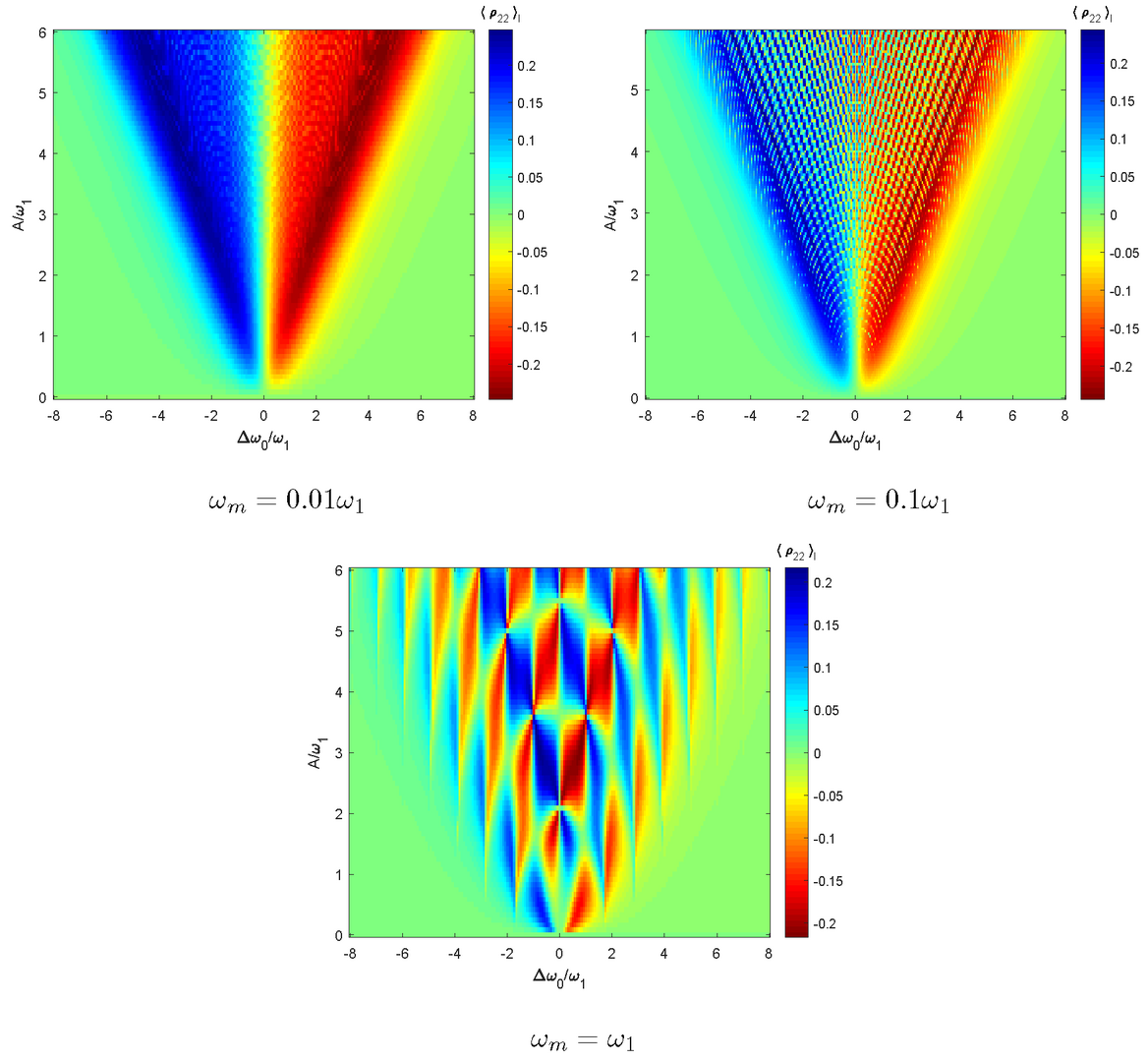 Figure 2: In-phase component of the excited state population for a periodically driven TLS with T1=ω1/400 and T2=2T1 for three different driving frequencies ωm.

3.3 Conductive detection of the Rydberg transtion in a Wigner crystal confined in a single 4 um-wide channel (Shan Zoe, in colloration with Sebastian Grossenbach from University of Konstantz)

Detection of the Rydberg transtion of electrons on superfluid helium confined in microchanel devivces is the first essential step towards realizing control of both the orbital and spin states of floating electrons for qubit implementation. In particular, our proposed scheme of the electron spin state detection is based on the detection of its Rydberg transition, by virture of the artificial spin-orbit coupling. In addition, the microchannel devices (see Fig. 3(a)) can provide an excellent experimental platform for electron manipulation.

In our first work, we acomplished the Rydberg transtion detection in a Wigner crystal comprised of many electrons transported through a single 20 um-wide and 4 um-deep channel filled with superfluid helium, see Fig. 3(b). The detection scheme is based on the change of the electron conductivity, thus the measured current of electrons ΔI through the channel, as the Wigner crystal is melted by the microwave (MW) absorption due to the Rydberg transition, see Fig. 3(c). Our experiment demonstrates the transtion frequency for the two lowest Rydbreg states to be in the range 400-500 GHz and the transtion linewidth on the order 10 GHz. The latter is determined by the inhomogeneous broadening due to the Stark shift of the transtion frequency caused by the external electric field, which is typical for a many electron system on liquid helium. 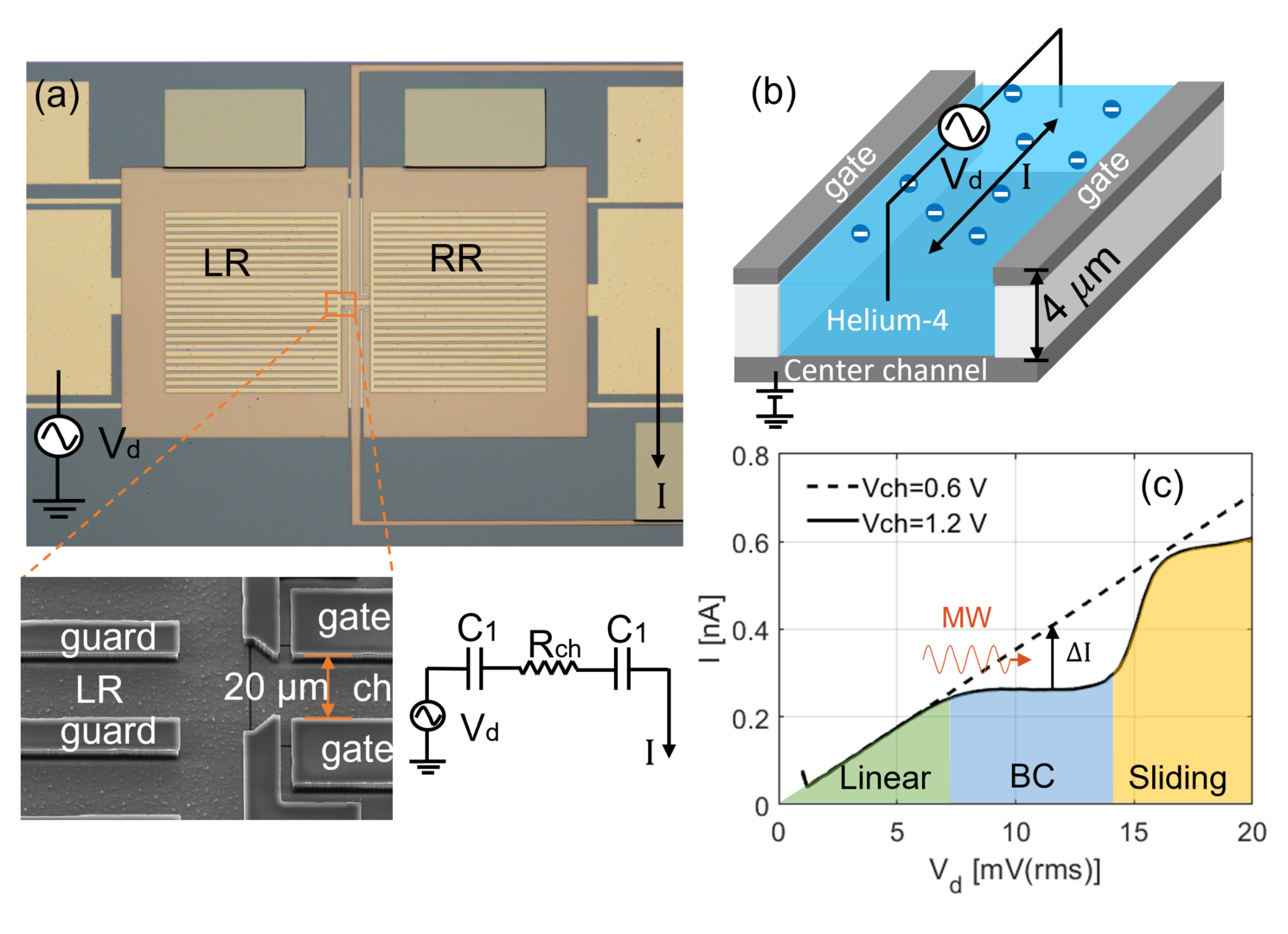 Figure 3: (a) Photo of the microchannel device for electron manipulation; (b) schematic view of a central 4 um-deep channel filled with electrons; (c) IV-curve of the Wigner crystal (solid line) and electron liquid (dashed line) demostrating an idea of the conductive detection of the microwave (MW) induced Rydberg transtion.

3.4 Image-charge detection of the Rydberg transtion of electrons confined in a multi-channel array (Shan Zoe)

The image-charge detection of the Rydberg transition, which was previuosly developed in our group (link), presents a powerful tool that can be potentially scaled to a single electron. In our new work, we demonstrated this method of detection for electrons on superfluid helium confined in a 47-channel array of 20 um-wide and 4 um-deep microchannels containg about 100,000 electrons.  The schematics of the detection method is shown in Fig. 4(a). The electrons excited by microwaves (MW) are capasitively coupled to a bottom channel elecrode and induce an image-current in a circuit. This current is amplified by a two-stage cryogenic amplifier developed in our group (link) and detected as a voltage signal at the room temperature.

Fig. 4(b) shows the detected voltage signals due to the excited electrons for several MW frequencies as the transtion frequency of electrons is tuned in resonace by the DC voltage applied to the channel electrode via the Stark shift. As in the previously described resistive detection of the Rydberg transtion (see Section 3.3), the transition linewidth on the order of 10 GHz is due to the inhomogeneous broadening of a many-electron system. This work presents our first step towards scalability of the image-charge detection to the single-electron quantum state readout.

Scalability of the image-charge detection method to the level of a single electron currently presents the most promising route towards realising the qubit state readout. In order to bring sensitivity of the image-current detection to such a level, we employ superconducting helical resonators, also known as LC or tank circuits. In particular, a parallel LC circuit can realize a very high resistive load at the circuit resonance, which in turn can convert an image-current due to a single electron into a detectable voltage signal. In addition, such a circuit provides an impedance matching between the voltage-measuring device and the electron setup by "absorbing" the stray capacitance of the device into the tank circuit.

In our first tank-circuit experiment, we employed a superconducting helical resonator with a loaded quality factor Q~800 to detect the Rydberg transtion of about 10,000 electrons in a single 4 um-deep channel, see Fig. 5(a,b). Fig. 5(c) shows the Rydberg transition signal detected using the pulse-modulated MW radiation at the modulation frequency which coincides with the resonance frequency of the tank circuit (835.45 kHz). For comparision, the signal obtained at the modulation frequency far from the resonace (650 kHz) is aslo shown, thus clearly demostarting the advantage of using a resonant tank circuit to enhance the signal-to-noise ratio of the image-charge detection method. This work demostrates the most promising route towards the Rydberg-state readout of a single electron. 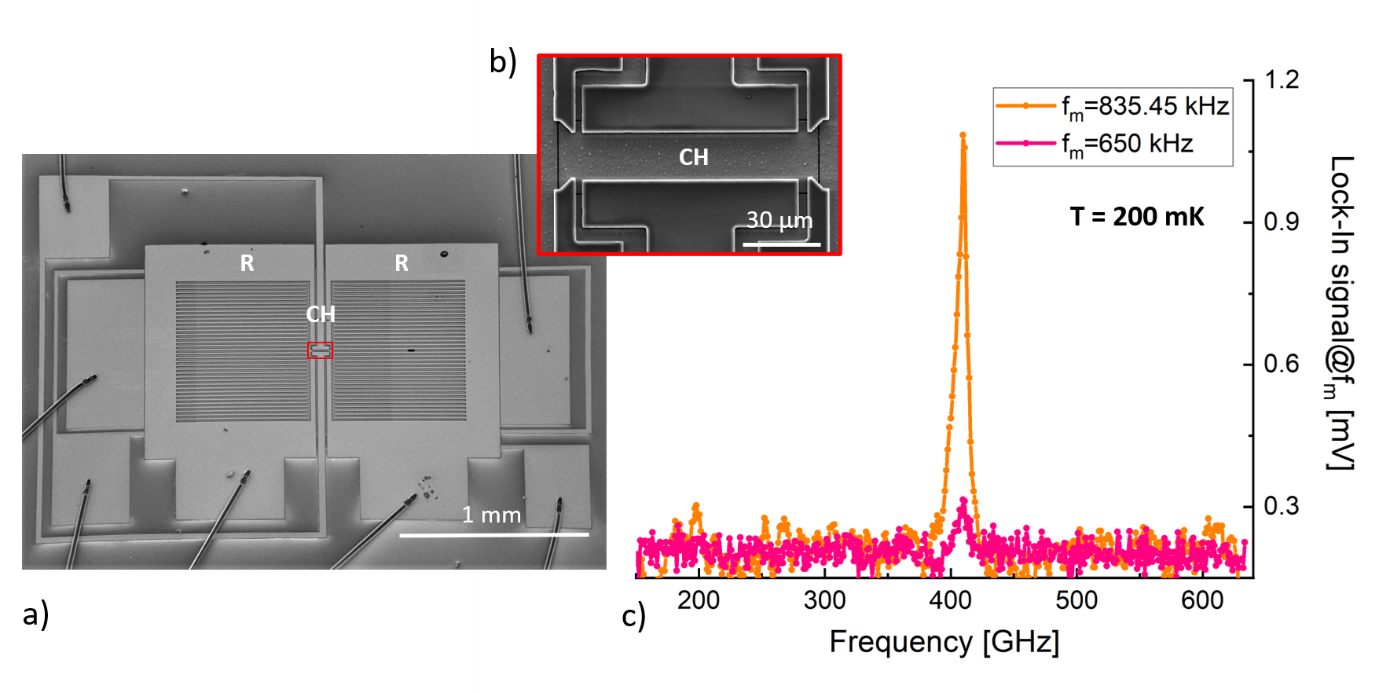