In FY2020 we continued our experimental work on the system of 2D electrons on liquid helium, in particular focusing towards spin qubit implementation. In 2020, we said farwell to four unit members: Petr Moroshkin took position as a senior staff scientist in Brown University, Emil Joseph moved to Princeton University for his second postdoc, Asem Elarabi transfered to the position of Electrical Engineering Specialist in OIST and, finally, Erika Kawakami moved to RIKEN as a PI to start her own research group. We also welcomed three new members, Dr. Ivan Kostylev who just obtained his PhD from Kyoto University, Dr. Jui-Yin Lin, our former PhD student who rejoint the group as a postdoc, and Dr. Mohamed Hatifi who joint us in January 2021 to do theoretical work on 2D electrons on helium.

2.1 Coupled 1D and 2D magnetoplasmons in electrons trapped on the surface of liquid helium

2.2 Stick-slip motion of 2D Wigner crystal on the surface of superfluid helium

2.3 Electrons on helium as a simulator for the color center spectroscopy

2.4 Detection of quantum states of a single electron on liquid helium

3.1 Coupled 1D and 2D magnetoplasmons in electrons trapped on the surface of liquid helium (in collaboration with Alexei Chepelianskii from LPS, University Paris-Saclea)

We discovered a new 2D magnetoplasmon mode, Gradient Magneto-Plasmons (GMP), in the system of 2D electrons on the suraface of liquid helium. This gapless mode is in the frequency range of 1D edge magentoplasmons and appears due to presense of a weak homogeneous grandient of the electron density. GMP mode appears as a peak in the real part of the measured cell admittance and is confirmed by our numerical simulations  (see Fig. 1) . This can allow us to study interplay between localized 1D (edge) and delocalized 2D (GMP) collective modes of motion in a model 2D electron system on liquid helium.

Figure 1: The real part of measured (left) and numerically calculated (right) complex admitance of the electron system versus gate-back voltage Vb, which controls the density of electrons, and excitaion frequency fac. Strong peak appearing around 2-3 kHz corresponds to the exciation of a novel GMP mode, which is confirmed by the numerical simulations.

3.2 Stick-slip motion of an electron (Wigner) crystal on superfuid helium confined in a narrow microchannel  (Shan Zou, in collaboration with David Rees from Cryogenics Ltd.)

We performed both time-averaged and time-resolved transport measurements of a 2D Wigner crystal on the surface of superfluid helium confined in a narrow microchannel. We find that the field-current characteristics of the driven crystal obtained by the time-averaged measurements exhibit oscillations and negative differential conductivity. This effect was attributed earlier to a nonequilibrium transition of the electron system to a dynamically ordered phase of current filaments aligned along the channels. Contrarily to this explanation, our time-resolved transport measurements reveal that oscillating field-current characteristics appear due to a repetitive pinning and depinning of the electron crystal to/from the liquid substrate (see Fig. 2). Our result demonstrates that this unusual non-linear transport effect is intrinsic, does not depend on the device geometry, and is associated with the ripplopolaron states of electrons on a superfluid substrate.

Figure 2: Time-averaged (left) and time-resolved (right) measured current responce of the Wigner crystal on superfluid helium driven along the narrow microchannel (shown schematically in the inset). Time-resolved response reveals a repetitive stick-spip motion of the system due to formation of the ripplopolaronic states on the superfluid substrates.

For many years surface electrons on liquid helium served as a model 2D system for studing electrical transport. In particular, it showed the highest mobility known in any 2D systems, as well as intriguing many-electron magneto-transport phenomena. On the other hand, much less is known about the thermoelectrical transport in this system. The latter could be strongly influenced by the electron-electron interaction, in particular strong violation of the Weidemann-Franz law might be expected in the hydrodynamic regime realized in this system already at moderately low electrons densities.

In our experiments, we observe strong evidences for the thermoelectric power (Seebeck) effect in the electron system which is locally heated by the micrwave excitation. By using segmented Corbino electrodes (see the inset in Fig. 3), we detected electrical current due to the flow of electrons from the heated central region to the cold periferal region (red line in Fig. 3).  This effect is accomponied by the current associated with the vertical displacement of charge due to microwave-induced excitation of electrons into higher Rydberg states (blue line in Fig. 4), as was observed earlier (link). Our work presents an opportunity to study thermoelectric effects in a model 2D system in the hydrodynamic regime where scattering is dominated by the inelastic electron-electron collisions. 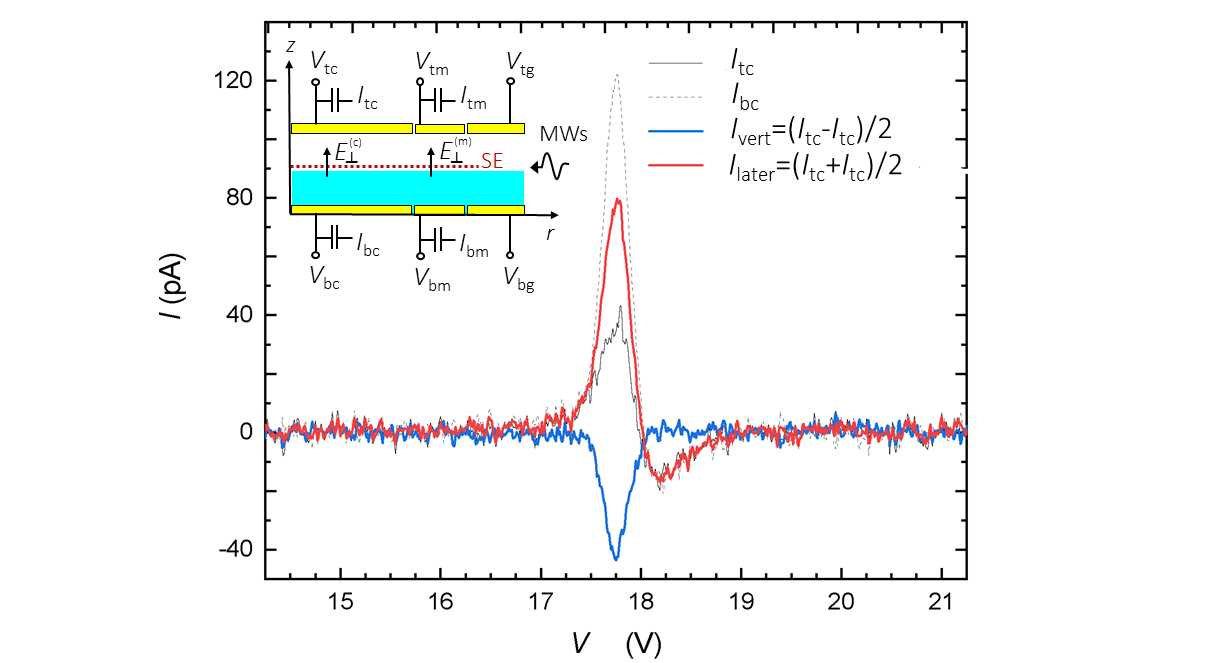 Figure 3: Image-current response of the 2D electrons on liquid helium to a resonant heating due to microwave excitation tuned to resonance with the Rydberg n=1-2 transtion at V=17.8 V. The measured lateral current (red line) indicates electron redistribution from the hot central region to the cold periferal region of the electron system due to the Seebeck effect.

3.4 Electrons on helium as a simulator for the color center spectroscopy (in collaboration with Mark Dykman, Michigan State University, and Alexei Chepelianskii, University Paris-Sacley)

We carried out a spectroscopic experiment with electrons on liquid helium in tilted magentic fields where we observed strong broadening of the absoprtion line corresponding to the micorwave-excited Rydberg n=1-2 transition with increasing field (see Fig. 4). The broadening showed a peculiar power dependence on value of the parallel component of magnetic field, as well as electron density. Our theory showed that this broadening arises due to many-electron effects, which is reminiscent of the broadening of optical transtions of electrons in the color cenetrs due to coupling to phonons of the diamond lattice. Our experiment and theory show complete correspondence, without any adjustable parameters (see Fig. 4). Thus, our work suggests that electrons on helium can serve as a model system to simulate quantum dynamics of the color centers in diamond (link). 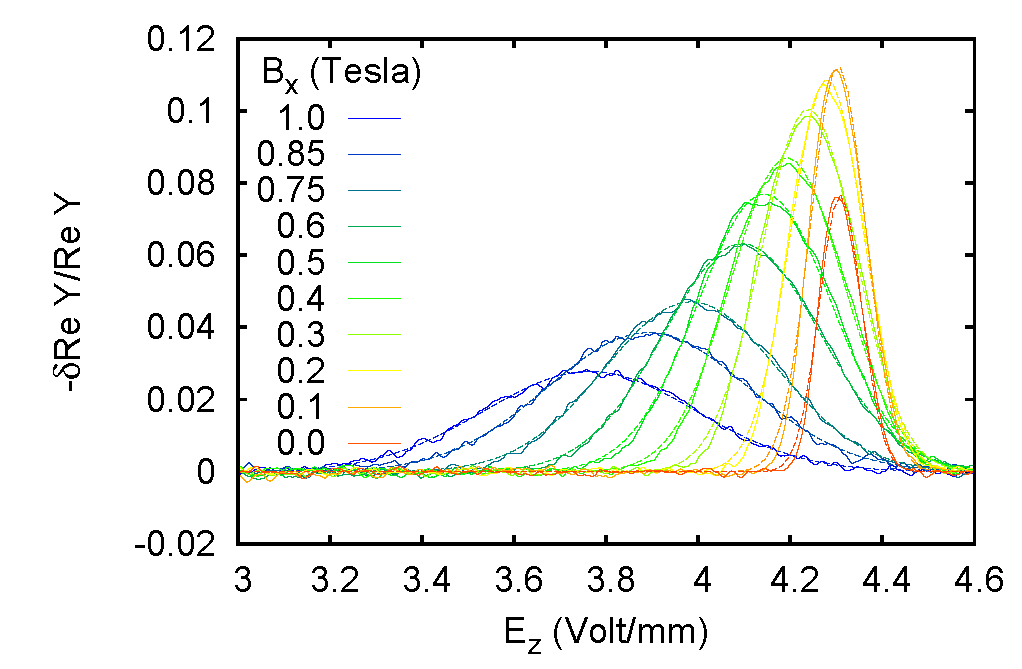 Figure 4: Absorption spectra due to microwave-induced Rydberg n=1-2 transition of electrons on helium in tilted magnetic field measured for different values of the parallel component of the field (solid lines). The dashed lines show corresponding predications of our theory.

In our experiment, electrons are confined in a microchannel device and coupled to underlying metal microelectrodes, which form a tank circuit with a surface-mount inductor L. The reflection spectra of the tank circuit are measured at RF frequencies in the range 0.1-1 GHz. Our preliminary results show that the refection spectra, in particular the position of the resonance, show strong dependence on the amount of liquid helium condensed into the microchannels of the device (see Fig. 5). This is caused by the weak polarizability of the dielectric liquid helium which changes the capacitance C. This allows us to hope that RF-reflectrometry will be a sensitive way to detect small changes in the capacitance C due to excitation of electron states, which in the future will allow us to scale down the detection of elecron states down to a single electron. This should open a pathway to build qubits using electrons on helium. 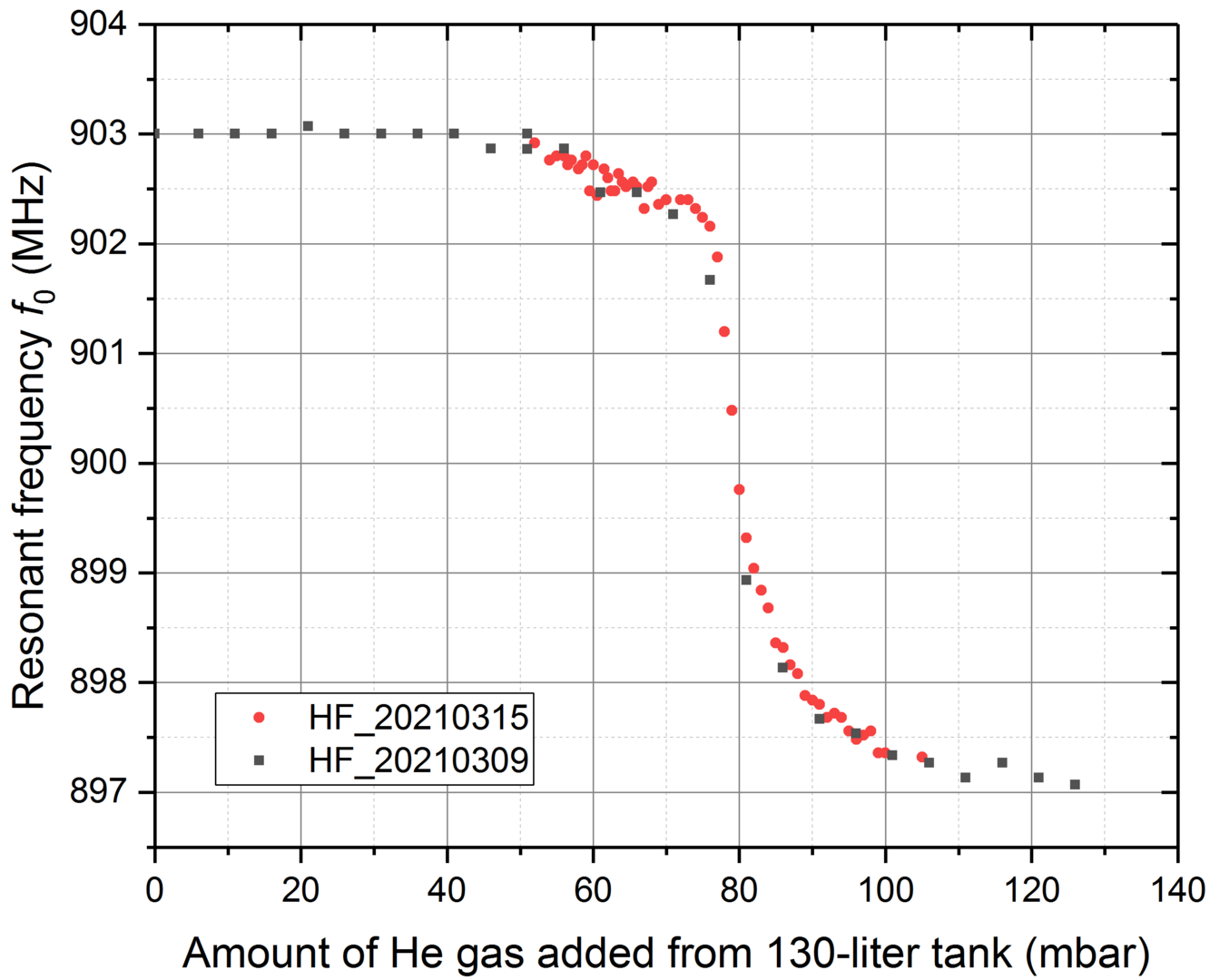 Figure 5: Resonant frequency of the LC (tank) circuit versus amount of helium gas condensed into the experimental cell which contains the micochannel device. The frequency shifts towards lower values as superfluid helium fills the microchannels, thus changing the capacitance between metal electrodes underneath the microchanneles.